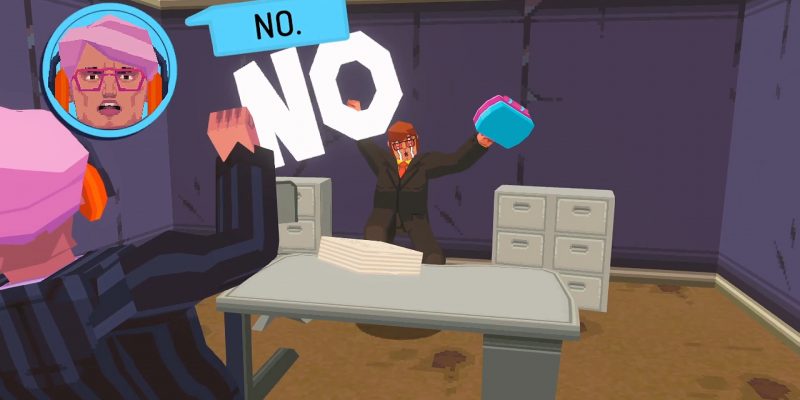 Have you ever wanted to scream “no!” in your boss’ face? You probably never thought you could do it in a video game, but here we are. Although, calling Say No! More a video game is a bit of a stretch. It’s more of an interactive movie, clocking in at roughly 100 minutes and without much actual gameplay to speak of. What it lacks in interactivity, it makes up for with its bizarre sense of humor, persistently strange presentation, and core idea that stay fresh for its duration. If an interactive movie where you choose when and how to do little more than say “no” sounds like a fun time to you, then this is likely to elicit some laughs.

Say No! More opens with you creating your character and watching as your friend gives you a lunchbox on your first day of work. Despite not being able to talk, your character has somehow gotten an internship at a company that does. . . something. After entering the office, you meet with a couple of other interns and the manager to go over the ground rules. But the manager realizes that he forgot to bring lunch that day, so he steals your lunchbox and runs off.

Heartbroken, you sit at your desk and ponder your life choices. But then you notice a tape deck and headphones. Putting them on and pressing play launches you into a self-help tape that’s all about telling people “no.” You immediately set out to get your lunchbox back and end up causing an enormous amount of chaos. As Say No! More is an interactive movie, it’s all shenanigans all the time. Its visual style is heavily reminiscent of Mega Man Legends and it’s fully voiced, although the English voice acting is delivered with a European accent. This makes the game even more surreal than it would have been otherwise. The story has twists and tries to deliver on its big theme at the end, but it’s so silly the entire way through that there’s no way it can be taken seriously. It’s funny, though. I often laughed and had a smile on my face during Say No! More‘s brief runtime.

Breaking down the walls

There is technically a bit of gameplay in Say No! More, but it’s more for playing around with than anything else. To put it bluntly, none of what you choose to do actually matters much, as the cutscenes will all play out regardless. But there are moments where you can shift the turn of events. Chasing after the company’s president sees you getting caught answering questions at multiple board meetings where you choose when to say “no.” Sometimes, you don’t actually have to say it at all.

Say No! More is mostly comparable to an on-rails shooter, albeit one without aiming. Or enemies. Or health. Well, it’s on-rails, at least. You don’t move at all; your character is constantly pressed onward. All you’re ever supposed to do is press the space bar at certain points to progress — with its once use quite literally making your character say “no.” And that’s all they can say. It’s ridiculous. There are four different kinds of “no”s that you can switch between at will. There’s the angry “no,” a cold, disinterested “no,” a lazy “no”, and a ‘wacky’ “no.” That last one has your character saying no in various strange ways. I swear I’m not making any of this up. Each “no” can be charged, and a charged no will use much more force than an uncharged one. A regular “no” will flabbergast and knock people down. A charged one will send them flying, often through walls.

The charged ones use up some energy, which you’ll need to regain by using uncharged ones. It makes no difference which one you use, although it’s fun to try them out in different circumstances to see what the results are. Say No! More mostly takes place in the office as you’re bombarded by people making demands of you on your way to the next cutscene. It’s worth mentioning that, although you can press the space bar during cutscenes, your character will just have an ellipsis appear over their head while grunting wordlessly.

In addition to the four varieties of no, you can also hold the arrow keys for four more actions. You can laugh at people, nod at them, clap, or go “hmm.” You never need to use any of these, as all they do is interrupt people for as long as you use them. The way Say No! More lets you randomly screw with interactions reminds me of Parappa the Rapper a bit, honestly. Once you’re done interrupting people, they’ll go back to what they were saying, although each of these interruptions often has unique responses. Your only other means of control is choosing when to let a “no” rip. For most interactions, if you don’t say anything, the other person will talk in a circle. There are occasional interactions where a bar appears onscreen and the character in front of you will talk until time runs out. Many of these are characters that you might not necessarily want to say “no” to. One of my favorites is when people randomly challenge you to staring contests.

If you simply do nothing and wait out the timer, congrats, you win. This can lead to you becoming the staring contest master who gets to sit on a throne in a hidden clubroom. I’m still not making any of this up. Say No! More is truly a ridiculous ride while it lasts, and I can see myself “playing” it again. It’ll likely be just like rewatching a funny movie. And we all know how well those hold up to repeated viewings.

Say No! More has no lofty ambitions and is a truly wacky, unique stab at surreal, goofy humor that can’t quite be compared to any other “game” I’ve seen. Its short runtime shouldn’t be held against it, as it’s a good thing. Much like some of my favorite moronic comedies, I don’t see how it could have milked its premise for laughs any longer than it does. If that’s your bag, then this is worth picking up — especially if you just want to send people flying by screaming “NO” in their faces. 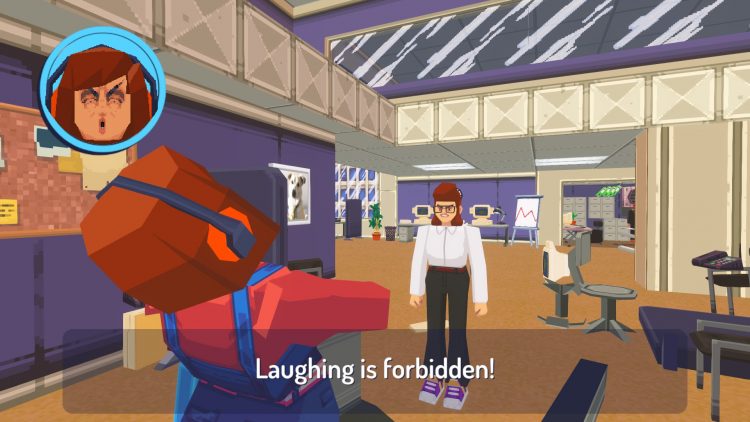 Look, it's more of an experimental comedy movie than anything else. Unless you just want to mess around and interrupt digital co-workers with laughter for however long you feel like.