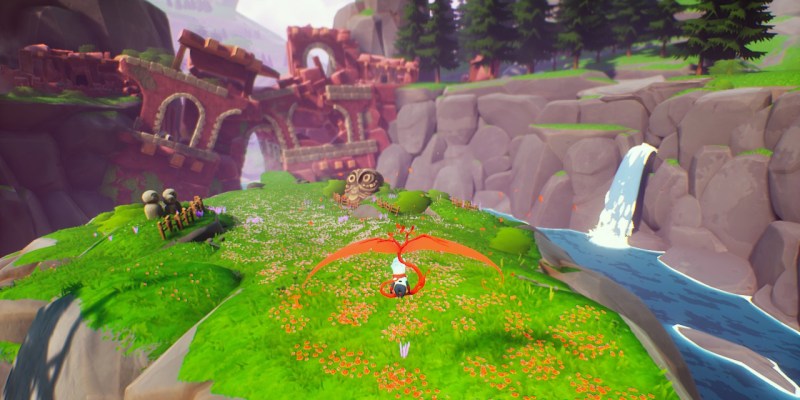 I feel like I’ve been seeing a lot of short, 3D puzzle platformers lately. And I feel that way because I have. Scarf is the latest one to grace us with its presence and, while it is only four hours or so long, it boasts an interesting narrative, a solid amount of variety, and surprisingly good world design that all add up to an experience that’s worth undertaking if you’re looking to blow an evening while learning about a star boy and his sentient scarf-thing. Just don’t expect a collectathon platformer, which is what I had initially hoped it was.

Scarf begins when the boy, known as a Nomad, is conceived and brought into the universe. He’s a small blue thing, but there’s a hole in the center of his chest. At the start, he meets the titular scarf, a living, red creature that rests about his neck. The scarf is but one small part of a main body, but that body is inactive now. Therefore, it enlists the boy into helping it find and reclaim pieces of thread that will be used to restore the being to its full power. There’s no dialogue for the most part, save for just one of the game’s beings.

Although your goal here seems totally straightforward, there are actually two endings in Scarf. As you explore the game’s areas, you’ll find stones covered with an inky shadow substance. Exploring nearby will lead to a sphere of ink. The scarf can’t go near it, but finding them will grant some lore and backstory. If you find six of the nine and place them in the pyramid in the center hub, you’ll get even more story, which will change the narrative’s outcome. It’s pretty hard not to pull this off, even if you only do a small amount of off-the-beaten-path searching. 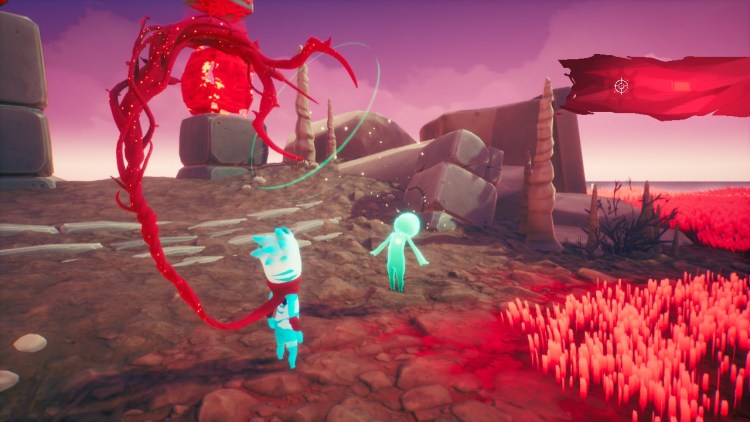 After the intro, you find yourself in Scarf‘s hub. There are entrances to three other worlds, the pyramid, and the altar where you place the threads. At first, only the starting ocean world is available. But after collecting the available threads, you’ll unlock desert and forest worlds as well. Each world has its own threads, inks, and a couple of other collectibles to find. Finding everything can certainly extend the game’s length by a fair bit, but that’s easier said than done, as many of the collectibles are fairly well hidden.

The ocean world is very short and mostly revolves around carrying a watery sphere to displace the water around you. To be precise, this means that you can walk toward the water, only for it to move out of your way and allow you to walk on the ocean floor. This shows up later as well, although not typically as prominently. Worlds are divided into sections where you typically need to collect five things and then use them to activate a separate thing. It’s pretty standard for this type of game, as you do the same basic thing in The Pathless, Omno, and Solar Ash.

One main difference is that Scarf at least tries to change it up. Certain areas have a pedestal with five marks on them. You’re supposed to find five items in the environment and bring them to the pedestal in order to activate it, which will repair bridges or structures, allowing you to progress further. You need to explore and solve puzzles to find these items. But these sections aren’t constant. Sometimes your scarf will be drained of color, and you’ll need to find five items to feed it to return its energy. This also changes the gameplay up, as the scarf is where your abilities are housed. 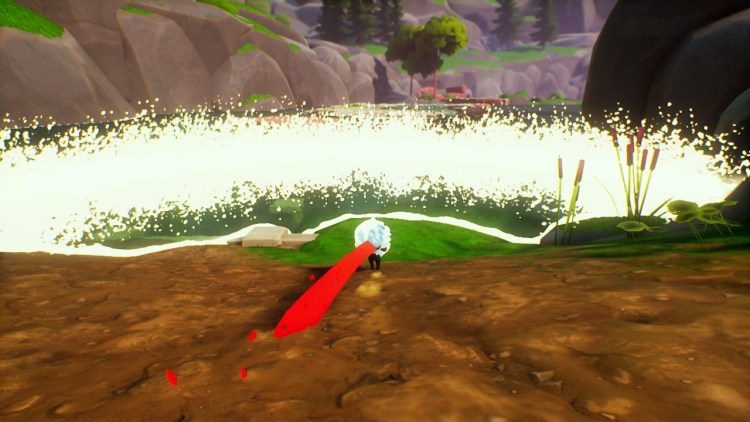 You’ll find the occasional glowing red sphere in Scarf. When consumed, these give your scarf new abilities. They’re very standard. One lets you double jump, another allows you to swing from grapple points, and there’s also one that lets you glide. When you lose your scarf during the aforementioned sections, you also can’t make use of any of these abilities, so you’ll have to make do without them for a time. It’s a nice change of pace that stops the game from feeling like you’re doing the exact same thing time and again as some similar games do.

As for what you’ll actually be doing in the game, you platform and solve puzzles. The puzzle design is clever, but it’s not at all interested in being hard or stumping players. Most everything is purely logical and I almost never found myself frustrated or at a loss as to how to progress. Save for one point in the forest, that is. This world has a sequence where you need to play a pointless bit of hide and seek with another child, but it’s signposted poorly and quite illogical.

You take threads from other characters simply by approaching them and then the game automatically does its thing. For this section, however, you’re not allowed to do that for no good reason. It’s a frustrating, trial-and-error sequence that had a stupid, easy solution that I only didn’t see immediately because it makes no practical sense. This isn’t a big deal since it’s the only thing in the game like this, but it’s also the last gameplay section, so it left a bit of a sour taste in my mouth at the very end. 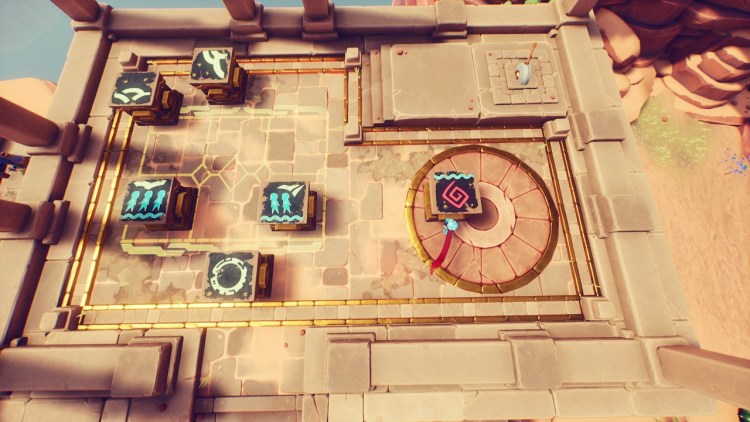 Despite that, I did enjoy the rest of the game. The visuals are quite nice, with wide expanses and some lovely use of color, plus the controls do their job well. Everything is plenty responsive. All of the game’s elements culminate in a slight, but sweet indie game about the nature of freedom that has plenty of relaxing moments alongside plenty of strong design choices. If these kinds of games are something you enjoy, Scarf is another one to add to the list. As long as you can stand that awful, time-wasting, hide-and-seek section. I may still be just a teensy bit mad about that. Teensy.

Short but sweet, Scarf is an intriguing, enjoyable little game for most of its runtime.