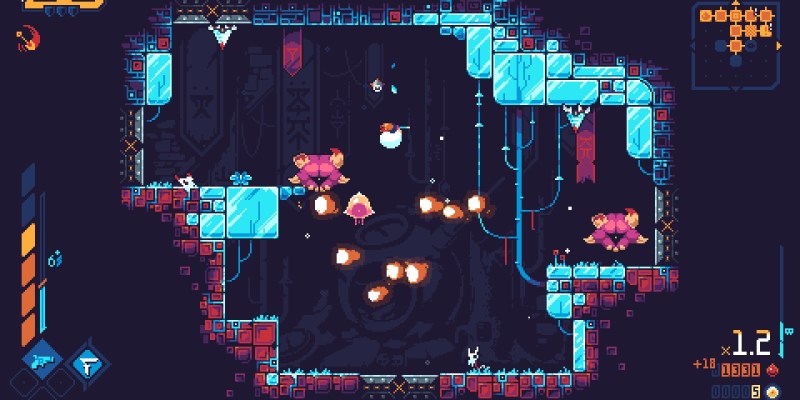 Many rogue-lites are very difficult. ScourgeBringer is one of those. It’s also extremely fast, precise, and highly demanding. Whether you’re skillfully dashing through the air and chaining hits on foes or dodging a giant flood of dangerous bullets, the game certainly has a lot going on. It has an endearing pixel aesthetic and a simple, yet entertaining structure that works well. But it does lack not only gameplay variety but a level of randomness that would make it a classic of the sub-genre. Regardless, fans of brutally hard 2D action games will find a lot to like here.

ScourgeBringer places you in the shoes of Khyra, a white-haired girl struggling to free humanity from the complexities of existence by going up against five judges in a post-apocalyptic world. There’s not really much plot here, although you’ll find tidbits of it in lore disks that you get out of old computers you find. I’ve read most of these and still have very little idea of what exactly is transpiring. However, I haven’t exactly spent any length of time poring over the text in an attempt to piece together some sort of deeper understanding.

Each run in Scourgebringer starts with Khyra starting at a tree with a portal in the center. There’s also an altar to the left where perks can be selected, and a guy to talk to on the right, plus a computer to read the lore you’ve gathered. When you’re ready to start your run, you simply jump into the portal and are whisked away to the first of five levels, each with its own design archetypes, enemies, and bosses. A single complete run will take around 45 minutes, but that’s, of course, much easier said than done. Highly-skilled players will be able to accomplish this without as much issue, sure, but everyone else is going to need to put in some substantial practice to be able to survive the hazards that lay ahead. 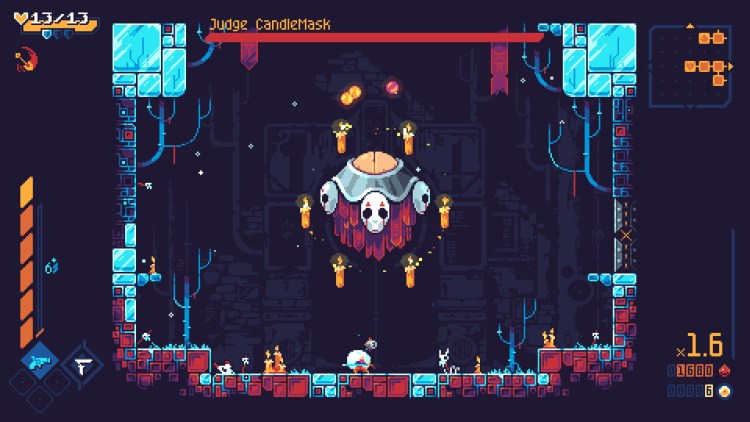 There are several moves at your disposal in ScourgeBringer. Khyra can jump, do a regular slash with her sword, do a smash with her sword, dash, and her equipped gun. The combat feels great, technical, and entertaining, even if it can get a bit stale after a while. While most other rogue-lites feature weapon builds and additional characters, you’re going to be fighting the exact same way for the entirety of your experience with the game. This isn’t necessarily a bad thing, but people used to changing things up might find this to be limiting.

While fighting, you’ll mostly be utilizing dashes and basic slashes in mid-air. Each level consists of a series of interconnected, single-screen rooms. These come in the form of combat rooms, shops, skill rooms, mini-boss rooms, and a boss room. Most rooms are of the combat variety and require you to kill everything in order to move on. Each level requires you to beat a certain number of mini-bosses before the boss room unlocks as well. The first two levels only require you to beat one mini-boss, while the third and fourth need two. The fifth has three on top of a final boss with two forms. Good luck with that.

Khyra is mostly going to stay in the air as she’s fighting since enemies often fly. ScourgeBringer mitigates this by allowing you infinite air dashes. You can stay airborne for entire rooms as long as you dash again before hitting the ground. The dash doubles as a movement skill and an attack, so you’ll typically dash into a foe, slash at them for a while, and then dash away. It’s hypnotic and flashy. Khyra’s smash attack can stun enemies and slam them into walls. It can also deflect any bullets it hits right at enemies, which is invaluable. 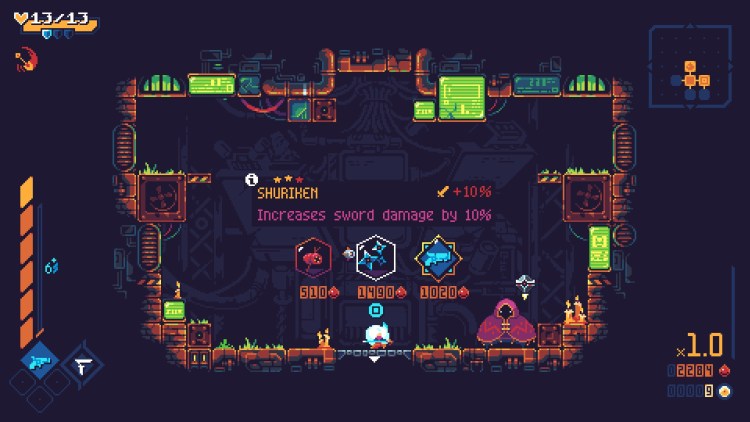 Enemies are going to be shooting at you a lot in ScourgeBringer. There’s always some warning, though. Smaller foes will have an exclamation point appear above them, letting you know to get out of Dodge, as you may be hitting them in the face at the time. The bullets operate in a bullet hell way, as there tends to be a cluster of them. Khyra’s smash arc can easily hit just a few of the bullets in her way while still letting some get through, so it pays to only deflect when it’s safe. Thankfully, she can fire some bullets of her own.

ScourgeBringer only has one main weapon, sure, but there are several different types of guns Khyra can either find or purchase. These range from the default pistol, to a laser, shotgun, chaingun, and the like. But ammo is very finite and it doesn’t take long to go through it, so it’s more to be used in emergency situations. Ammo can be refilled by crates enemies drop with some frequency, but it’s not enough to really change your entire playstyle, which hurts the game a bit.

As for the rogue elements, Khyra can find skill pillars that will grant her a skill for the run. You can find several of these in a single run and they can make a large difference, such as giving her more health, changes to damage, and changes to the rate of currency collection, among others. Enemies drop blood as they die, which is tied to a combat multiplier that increases as you fight without getting hit. This blood is spent at shops to purchase things such as healing items, mods, and new guns. Additionally, there’s a permanent currency that bosses drop that ScourgeBringer lets you put into skills at the Chiming Tree before a run. You can enable or disable these while at the tree and they increase your chances of success. 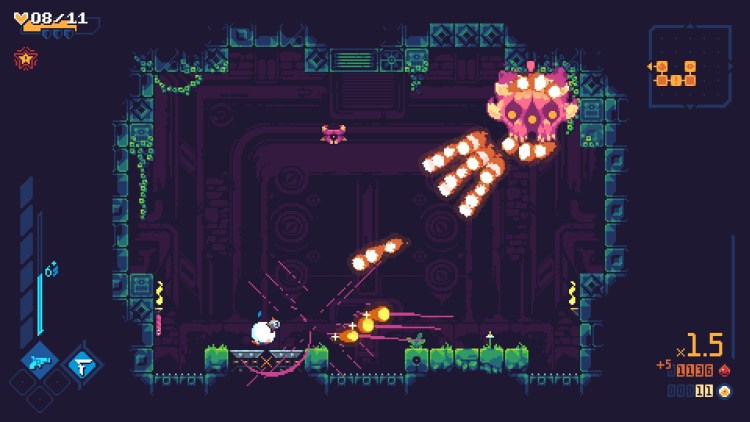 However, ScourgeBringer isn’t a game you can brute force with upgrades. You’ll get a max of 10 HP through passives, plus more that you can add within a run. Each hit does a single unit of damage, but you’re absolutely going to need to not get hit much to survive. Enemies occasionally drop small healing items, and you’ll sometimes get a full heal from a skill pillar, but taking too much damage is hard to recover from. Especially since there’s very little invulnerability time after getting hit. A couple of seconds of mistakes can easily cost you a big chunk of your life bar.

Overall, the game is extremely difficult and success is going to come down to skill. The random power-ups you find during runs can certainly help, but they don’t change the experience up massively. You’re not typically going to find a stack of lucky combinations that make you a powerhouse in ScourgeBringer, and so you’ll need to have the skill in order to beat it normally. There are accessibility options for people who want an easier time, although they’re not great. You can reduce and increase game and bullet speed, which can help some. But the only other main options are to make health drops more common or straight-up invincibility. This is a glaring missed opportunity for the game to become more enticing to less-skilled players, as full heals after beating a boss or checkpoints would be far less drastic than being invincible.

ScourgeBringer is a good time, but most runs end up feeling interchangeable due to the pure focus on skill, single main weapon and character, and lack of general randomness. Once you beat the game, you can unlock a much harder version with selectable challenges that can crank this already hard game up to ridiculous levels. How much someone is bound to like the game really boils down to how much they enjoy the combat. Otherwise, I can see a lot of people losing interest or being turned off by the high skill requirement. 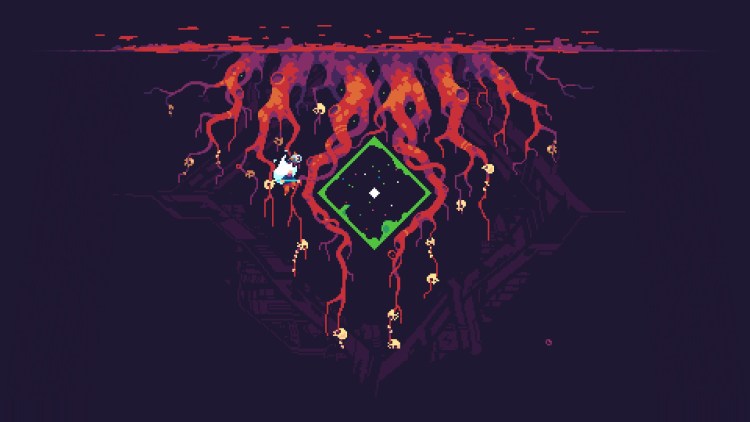 ScourgeBringer has strong pixel visuals, extremely tight gameplay, and a high level of challenge. But a lack of variety limits its appeal.