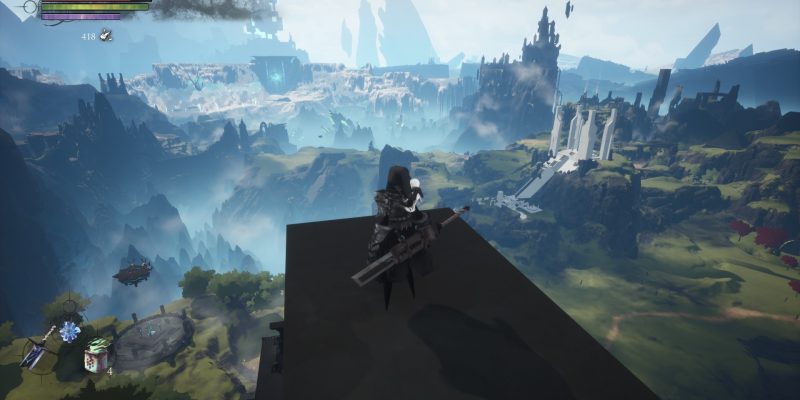 Ambitious 3D indie games both intrigue and worry me. They’re often a font of impressive ideas that tend to end up forcing the developer to scale back production in order to ship a finished product. Shattered – Tale of the Forgotten King is one of the rare ones that went ahead full blast, despite having a team mainly comprised of just five people. The game pulled me in and I got a lot of enjoyment out of it. But despite that, it’s also staggeringly unpolished and has a lot of glaring problems that can’t be overlooked.

Shattered is a Souls-like — but it’s an easier one. By the time you reach the end of the game’s first act, you’ll have faced every member of its bestiary. Enemies in the game’s final area are the same as they were in the first, save for their damage and health values. Similarly, there are different weapons that can be equipped but they’re mostly interchangeable save for the amount of stamina they use and their damage. Suffice to say, the combat stays functionally identical for the entire experience. The dance of death is far less difficult when you learn the steps at the start.

The game begins much like others in the subgenre. You’re tasked with traveling to the seat of an ancient kingdom for reasons. The lore in Shattered is intriguing and written with a surprising degree of talent. But I still rarely had any idea what was going on. In order to figure things out to a more satisfying degree, you’ll have to use items called eibon fragments to unlock journal entries in the game’s codex. But these fragments can also be used to level up your character a single time, so there are reasons for and against using them in this manner. 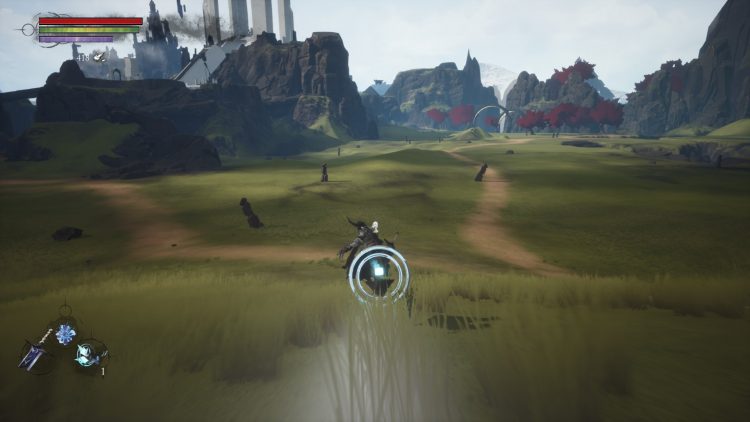 Led by no nose

The progression in Shattered is initially par for the course. You make your way through zones that lead to others. You do this by exploring for keys and levers that open the way forward, as well as finding shortcuts that connect you to the game’s bonfire equivalent. The visual design here is noteworthy and impactful. Massive amounts of surreal space often surround you, with odd, otherworldly architecture. The level design is often effective, even if some areas can blend together a bit more than I liked.

Once you get out of the area where Shattered‘s first act takes place, the game pivots. It reminded me of a game I recently reviewed called Blue Fire. In that game, once you got several hours in, you were told you needed to find and defeat three bosses in order to open a path to the endgame. But that game collapsed on itself and rushed to its ending. By contrast, this is where Shattered opens up. You step through a doorway and come face to face with an enormous world with no direction other than beacons of light pointing to the locations of the three bosses you must defeat.

At first, it’s dreadfully intimidating. The world isn’t just big — it’s too big, and needlessly so. Before embarking on your journey, you gain access to a speeder bike that you’ll ride to your destinations. Unfortunately, the world itself is surprisingly barren, with few enemies aside from the occasional ones huddled around a chest containing upgrade materials. You need to traverse this massive space, find and defeat the three Watchers, and then open the way to the game’s final section. This encompasses over half of Shattered‘s playtime. 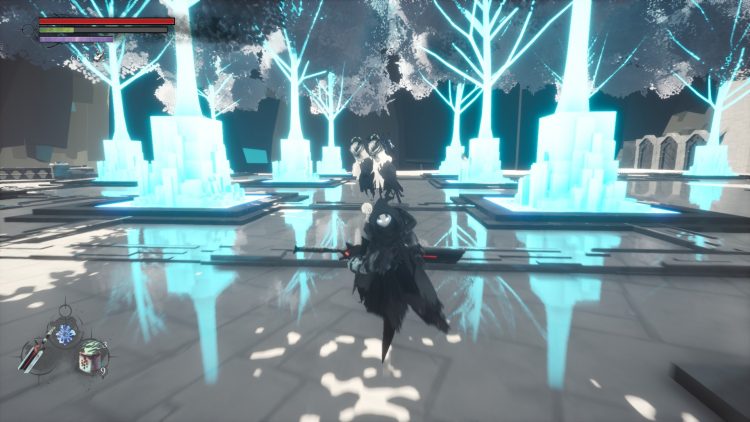 On one hand, I appreciated how unique these choices were. No other Souls-like that I’ve seen has done world design to this extent. The sense of discovery as you learn the layout and find new teleporters is engrossing. But it also feels completely at odds with the typical zones you come across. No matter how interesting it is, it just doesn’t make that much sense for Shattered to sprawl so wide. And it’s complicated by some of its design.

In order to make your way to the red Watcher, you have to go through a town, which you can either explore or exit past. It feels meaningless and confusing, especially if you’re not sure of what your goal is. Thankfully, the first Watcher is close to the start of this massive section and will give you an idea of what you should be doing. But after you leave the pointless town, Shattered makes another, stranger decision. Remember Snake Way from Dragon Ball? When Goku had to traverse that long, winding path, knowing that he’d fall to his doom if he fell off? Shattered contains something similar.

However, you need to do it on the speeder bike. And boost to make jumps. The bike’s controls are fine when you’re on the ground, but the level of precision required to do this bizarre, tedious section is obnoxious. If you fall off, you have to start over again. There is nothing else in the game like it, and it feels out of place, like an experiment that was shoehorned into the rest of the game. I’m grateful that it only happens once, but I hope to never have to do it again. 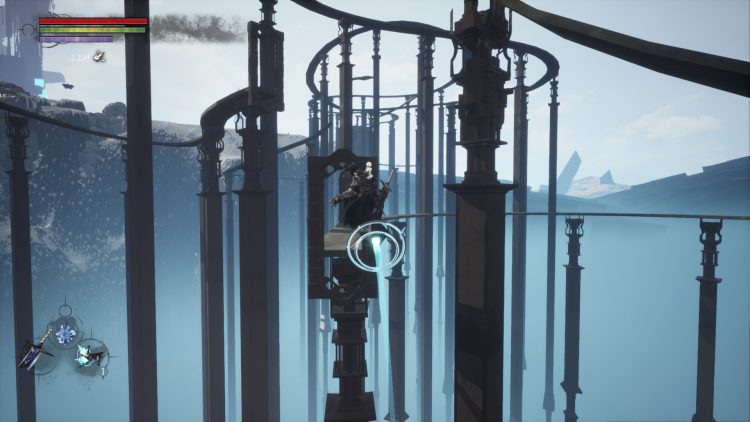 That’s a lot of jumping

Of course, Shattered is also a platformer sometimes. Your character can double jump and air dash to get around and, honestly, the controls work quite well. The platforming is integrated in a satisfactory way and it aids the exploration. But sometimes the game switches to a side or overhead perspective for various sections, which is strange because this often doesn’t help. You still have a full range of movement, but it can be easy to fall to your death due to not being able to discern depth due to the camera. There are also platform sections with the regular camera that suffer due to you being unable to distinguish platforming depth. You just can’t win sometimes.

Thankfully, you don’t lose any of your currency when you die from a jump — only when an enemy kills you, as per the norm. To get it back, you have to go and fight that enemy, although not necessarily kill them. In order to level up, you’ll need to head back to Shattered‘s hub: Limbo’s Heart. This functions like the Nexus in Demon‘s Souls. Here, you can level up, upgrade the number and efficacy of your rechargeable healing items, upgrade your weapons, and craft supplies. The game never makes it a pain to get back here, as it gives you items early on that let you not only warp back whenever you want, but also allows you to warp to your last-used bonfire equivalent with ease.

Limbo’s Heart also has a transporter that lets you travel to any other activated device you’ve found. There are plenty of things to find and tons of reasons to explore the world this way. There are also sidequests that allow you to interact with NPCs and learn new bits of lore. It’s all more than adequately considered and it makes getting around a breeze, which shaves off a lot of tedium it could have had otherwise. 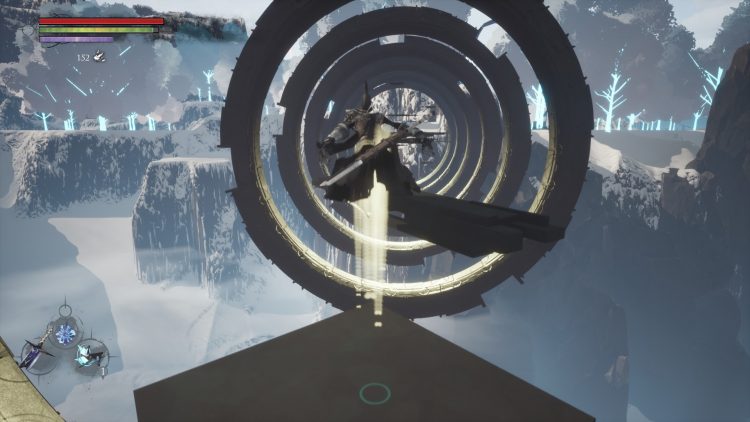 But I hit you!

Finally, there’s the combat. To put it bluntly, it’s functional but lacks weight. You have to manage your stamina and can swing your sword, use magic, block with a magic shield, dodge, or parry. It’s fairly typical. Sadly, the combat is inconsistent and wonky. I noticed that my attacks, especially using my favorite sword, would often go through an enemy without connecting. Likewise, there were plenty of times where I didn’t take damage where I should have. On the flip side, it’s easy to take damage when you clearly shouldn’t have. At one point, I was lying flat on the ground and got hit by a horizontal attack four feet above me.

The hitboxes on your dodge are similarly unreliable. I’d dodge certain attacks repeatedly, only to get hit for no reason. The parry is extra unreliable, as it flat-out doesn’t work some of the time. Shattered has a backstab that also didn’t work half the time I tried to use it. And… sometimes it works from the front. I fought one boss that I was able to beat easily because, after parrying them, they were immediately open to a backstab even though I was standing directly in front of them. The combat is, indeed, deeply unpolished and needs a hell of a lot of fine-tuning.

The repetitive enemies in Shattered are typically easy and underwhelming, but the bosses are more trying. Almost none of them are mechanically difficult, though they can require a fair amount of bullshit mitigation. Those three Watchers you have to fight are the same enemy with different gimmicks, some of which are horribly frustrating. One has three turrets firing projectiles at you, which you’ll need to destroy before taking him on. But if you shoot them before directly entering his arena, they’ll immediately respawn but be invisible. There’s also a regular version of this enemy that you’ll see in the zones themselves, plus an introductory Watcher boss fight early on. 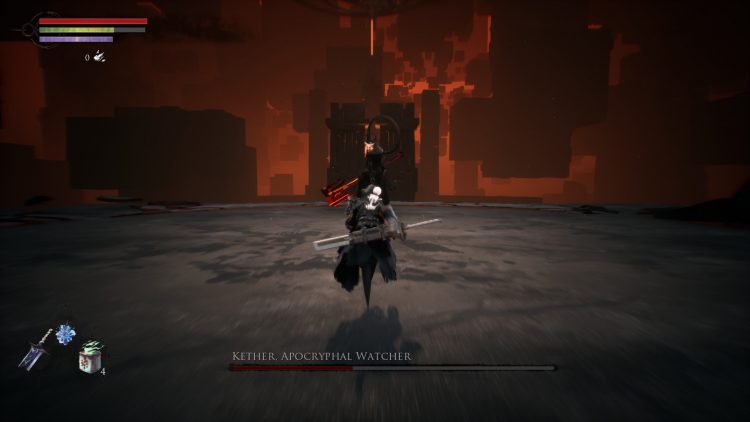 There are boss fights against another repeated character model known as the Stranger, too. There are, at least, four or five unique boss fights that mostly fare better. As I said, they’re not all that mechanically difficult, and certainly don’t compare to the boss battles in other Souls-likes. They’re rarely hard, just often cheap — or see you struggling against the game’s mechanics. Also, there were times when I respawned after dying to bosses only for the bosses to still be aggroed, resulting in them killing me right as I came back to life. Oof.

Overall, I like Shattered and was singularly focused on playing it for the 17 or so hours it took me. It contains some intriguing ideas and is genuinely exciting, yet is brought down by strange design choices, jarring pivots, and unreliable combat mechanics. I can’t deny that it’s immersive and much of the game’s ambition is fulfilled. But, personally, I’d wait for more patches before picking it up yourself. It really needs them.

Shattered - Tale of the Forgotten King

Simultaneously engrossing while desperately in need of focus and polish, Shattered is a hard game to recommend in its current state. But its strengths will make it worth a look for fans of Souls-likes when more of its issues are ironed out.