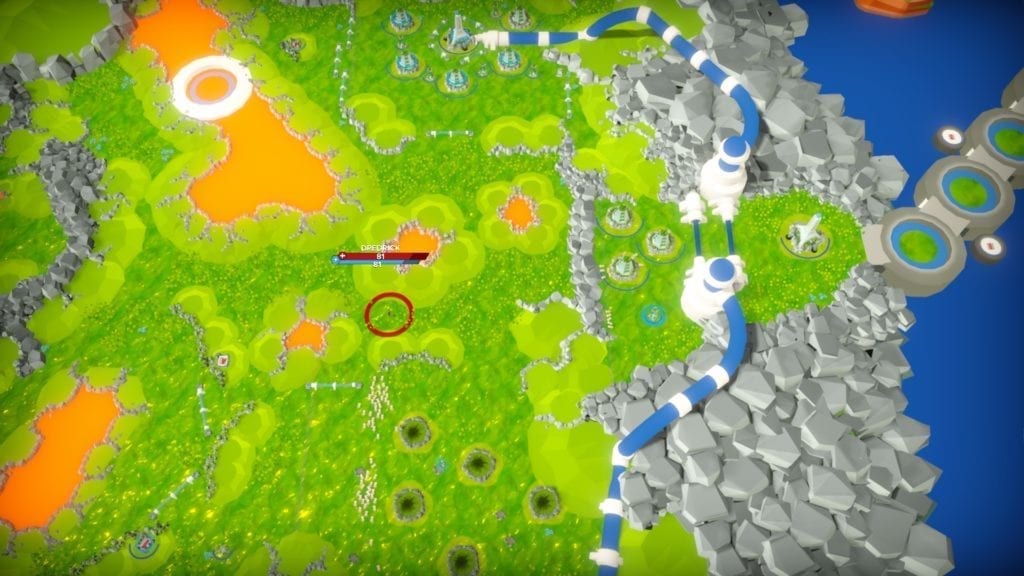 Destroying things is fun. We can all agree with that, right? Hitting things until you can’t hit them anymore as they crumble before you is a time-honored gaming tradition. Space Viking Raiders‘ title does a succinct job of summing up its premise. You play as space Vikings and destroy stuff. So, does this game make it a joy to destroy?

Space Viking Raiders doesn’t waste much time. After starting the game, you’re treated to a brief intro that sets the plot up. The titular Vikings capture a research center that focuses on portals to other dimensions. Our protagonists have very simple goals – to go to these different dimensions, crush anything in their path, and take a valuable substance known only as Elementium.

Suffice to say, Space Viking Raiders is far from plot-heavy. Aside from the intro, there really isn’t much plot progression to speak of. Instead, each of the game’s 10 levels – one of which is a tutorial – begins with the characters talking amongst themselves. They then speak to a representative of the foes they’re about to conquer. These are fully voiced and feature static portraits of the characters that shake around in place of movement. They are also hilarious. 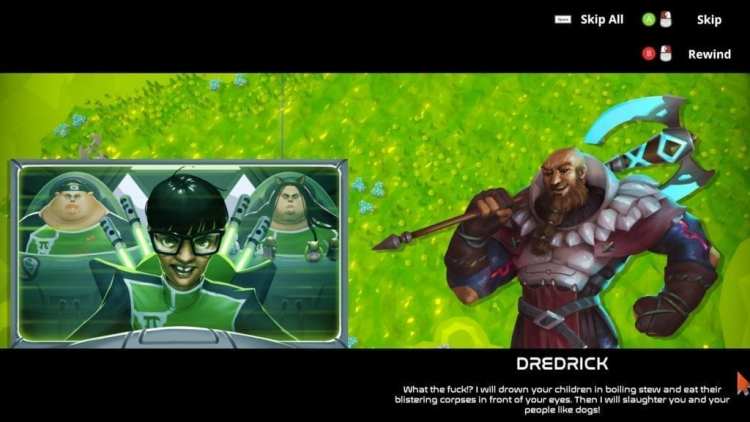 The Dialogue Is Some Of The Funniest I’ve Seen

Not only is the dialogue fantastic, but the voice acting is pitch perfect. The Viking team consists of four characters, and their banter alone is worth the price of admission. All four of them have extremely distinct personalities that kept me entertained throughout Space Viking Raiders‘ entire duration. Whether the scene pertained to how Dredrick was hoarding all of the Elementium for himself without a care for how the others feel, or when the team is being exasperated by their idiotic berserker, Tommy K, the game is pretty much always funny.

As far as gameplay goes, Space Viking Raiders plays similarly to a MOBA, albeit it’s co-op PVE and not very strategic. Each of the game’s levels drops you into one of three dimensions. One is home to slugs, one is where a civilization filled with technologically-advanced tiny people live, and one is filled with bloodthirsty sugar monsters. You visit each of these dimensions a few times, which the game hilariously lampshades by having Dredrick fly into a rage and kill all the portal scientists.

In each level, you and up to three other players are tasked with attacking the level’s denizens and stealing their Elementium. Each level holds a certain number of Elementium moles to steal, and the game breaks each of these into sections. Upon approaching a section, a large swarm of enemies meets you to stop you from breaching. After you dispatch them and enter the section, there are turrets, enemy hives, power stations, and Elementium containers to contend with. 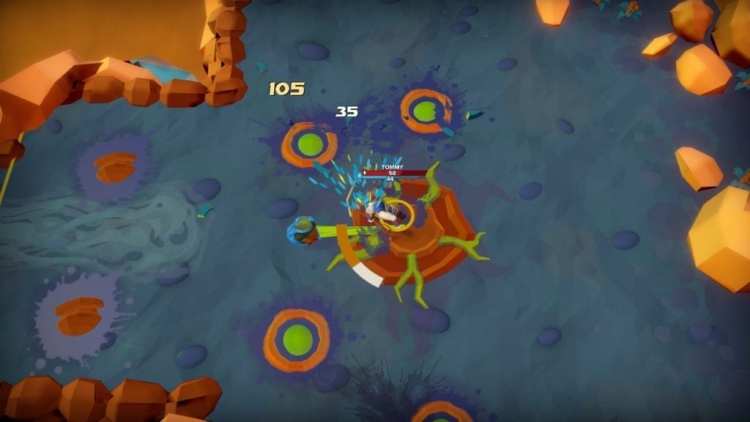 In order to get the Elementium, you have to break . . . uh, whatever that thing is.

The hives continuously produce swarms of enemies, and the turrets take potshots at you. Power stations frequently protect these placements, which requires you to find the best way to take them all out so you can make it to the Elementium. For instance, I found it best to take out the turrets first, followed by the enemy hives. When a placement is protected by a shield, a line of electricity will show you which specific power station is powering them. All of these only take a few hits to destroy, save for the Elementium containers. These take a beating so that you can’t just waltz right up to them while the enemies tear you apart. Once you free the Elementium mole, you get a score bonus if you hit it to your ship within 30 seconds.

Combat-wise, each of the Vikings has an ax attack and four abilities. Two of these abilities are the same for every Viking. These consist of a projectile cast attack and a wave cast attack that holds your enemies in a trap and slows them down. Each Viking also has two unique abilities. For instance, Dredrick has a more powerful melee smash and can call down lightning, while Zica can throw cluster grenades and use a powerful sniper shot. It’s a lot of fun trying out the different abilities and finding the character that works best for you.

The combat is also very entertaining in general. It’s really awesome to just decimate a huge swarm of enemies by hitting them with a bunch of abilities. Destroying their buildings and placements with your ax is also really satisfying. When destroyed, the turrets drop health pickups and the power stations drop energy. All casts use up energy, and it’s really easy to run out. And since fighting a swarm with just your ax is a great way to die, it’s important to use your casts only when you need to. Although, all dying does is send you back to the last checkpoint with all the damage you’ve done to your foes intact, so even that isn’t a big deal. 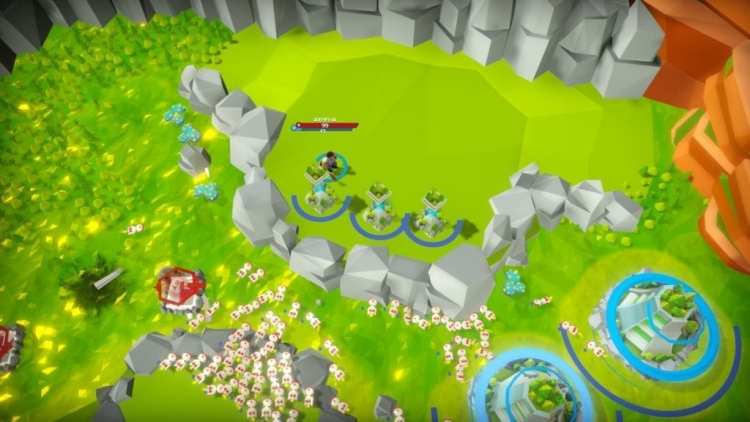 Better get to smashin’.

The Graphics Aren’t Great, But They Get The Job Done

After each level, you receive an evaluation on how long the level took you, how high your combos were, if you managed to get the Elementium within the time limit, and how many times you died. The game then awards you a bronze, silver, or gold medal for how well you did. Getting a gold medal is nice and all, but they’re very easy to get. I got a gold on my first try for most levels and never got a bronze. There also aren’t any rewards for getting these, unfortunately.

Visually, the game is a mixed bag. The devs were clearly working on a very small budget, so I can’t fault them too much for it, however. The levels themselves are huge and feel different from each other, but the colors are extremely bright and garish, making the levels uglier to look at. The character models are also low-poly and are very low in detail. Needless to say, anyone who needs good graphics won’t be happy with this, but I didn’t mind much since the game is so entertaining.

Space Viking Raiders is also a very short experience. A single run through the game takes around 3-4 hours, but the devs may be adding more levels and modes in the future. There are also multiple difficulties. I played through on the normal mode the first time through. Hard mode, while not all that difficult, feels different enough to make it worthwhile. 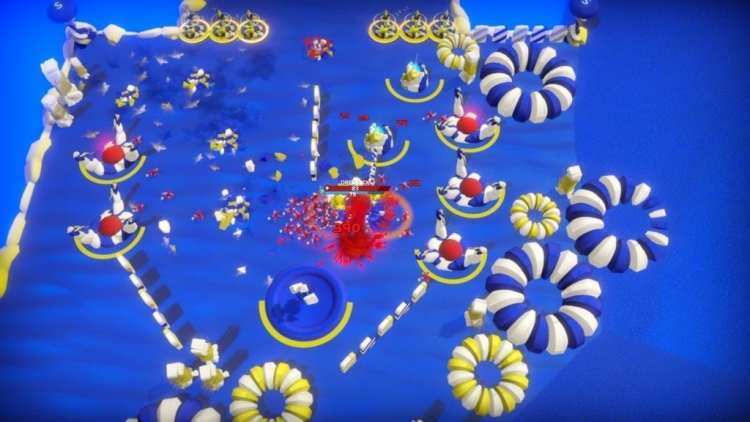 This may not be a long or good-looking game, but I thoroughly enjoyed it. The gameplay is really fun, and the story sequences are a hoot. As such, I can easily recommend Space Viking Raiders to anyone looking for a good, destructive time. I just wish there had been an ending cinematic instead of the game just ending abruptly. I would have liked to have spent another few minutes with the characters and their extremely entertaining conversations.

Space Viking Raiders is short and simple, but it's a lot of fun for up to four players.

My Time At Portia Review – My Time Waiting And Sleeping

The Walking Dead: The Final Season Episode 3 Review – Back From The Dead

By Daniel Pinheiro10 hours ago
Reviews

By Leo Gillick13 hours ago
Features

By Matt Henzel1 day ago
Features

By Chirag Pattni7 days ago
Features