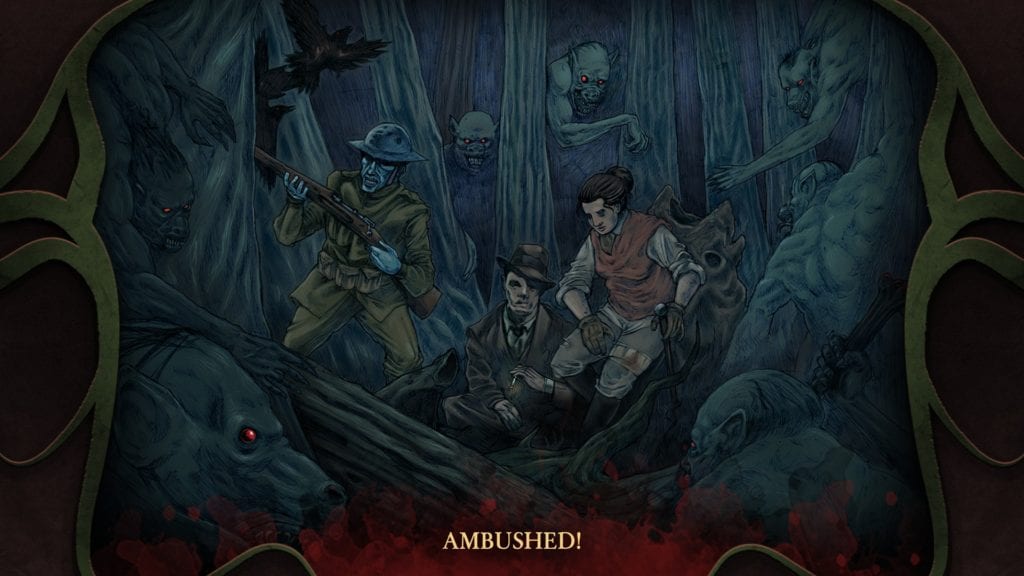 Eldritch horror! It’s all the rage these days. Poor ol’ Lovecraft could have hardly hoped to leave such a long-lasting legacy. However, we don’t often get RPGs that so directly interact with the source materials of the Mythos. For the longest time, one had to resort to pen and paper RPGs. Today, on the other hand, you can play Stygian: Reign of the Old Ones.

In Stygian, you play as one of the luckless Gilded Age people who found themselves in Arkham on the Black Day. This fictional Massachusetts town is integral to H.P. Lovecraft’s stories, and now, it has found itself ripped from Earth and hurled somewhere else. Life is hard in this maddening dimension, and by the time you start the game, everything has gone to pits. Yet the mysterious Dismal Man appeared in your dream last night, and you now have a clue to follow. Try not to lose your head – literally and metaphorically.

Born in the stygian USA 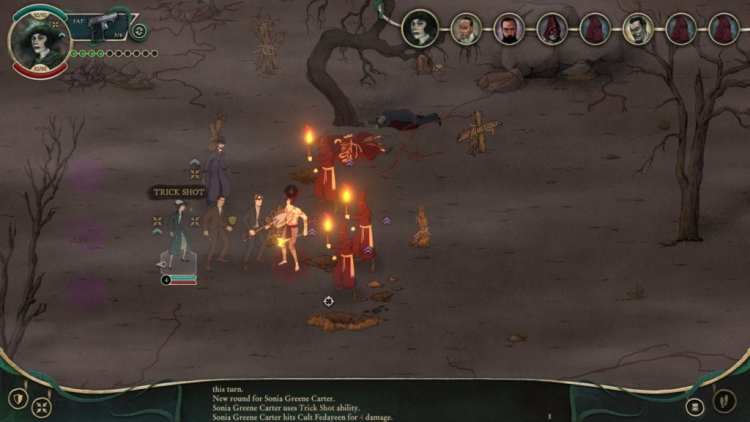 Cult robes? Probably not as powerful as full metal jacket.

Stygian: Reign of the Old Ones is a 2D RPG with turn-based, hex-grid combat. Most of the time, you mosey around Arkham and its environments by directing your character with mouse clicks, just like in the Fallouts of old. Your companions (plot-important NPCs) and henchmen (beatstick NPCs) follow. Once you enter combat, you get to control your friends as well. Everyone takes their place in the initiative track (it is reshuffled every turn) and spends their action points doing violent stuff (or using them to boost either offense or defense).

You start the game by creating your character. Stygian: Reign of the Old Ones might be set in the unenlightened era of the 1920s, but all Archetypes (classes) are available to women as well as men (though you can expect some differences in reactions when you get to encounter people). Each Archetype has 4 backgrounds (subclasses), 3 of which give you a boon in exchange for a certain penalty. For example, a Marine (Soldier sub-class) can start with the “Aimed Shot” ability. However, they also start out with some accumulated Angst to represent the horrors of war witnessed before the events of the game. You also chose your morality system. Acting in tune with it helps you regain sanity. So, for example, Exoterists fare better if they see the occult behind everything. Afterward, it’s just a simple matter of spending points on Skills and Attributes.

Your background will determine your starting inventory, with one exception. The Aristocrat Archetype also starts you off with a loyal butler Companion, who is a beat stick par excellence. Just like in real life, rich people are cheating! 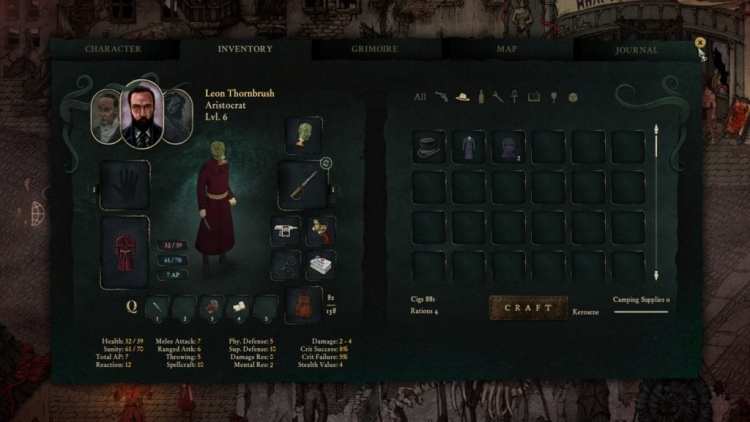 Outside of that, the comparison to ye olde Fallout games (so, Fallout 1 and 2) is very apt. Stygian: Reign of the Old Ones loves its textual descriptions of environmental details and items in your inventory. It also loves shoving books and notes your way. There are dialogue trees aplenty to navigate, and your quest descriptions are written in the first person. There’s a lot of reading to be done on this maddening ride, though it never feels as excessive as in Shadowrun: Hong Kong.

While you wheel and deal with other characters, you will have plenty of dialogue options. When it comes to roleplaying your morality, the choices leading to sanity regeneration aren’t marked. However, if you have a skill that’s relevant to the matter at hand, the game will provide additional options (which are clearly marked). Unlike the newer Fallout titles or Pillars of Eternity, though, you will never know whether you’re missing out by not having a certain skill, as options you’re unqualified for are not even hinted at. I like this bit of obfuscation, as it helps immersion and makes the game less game-able. 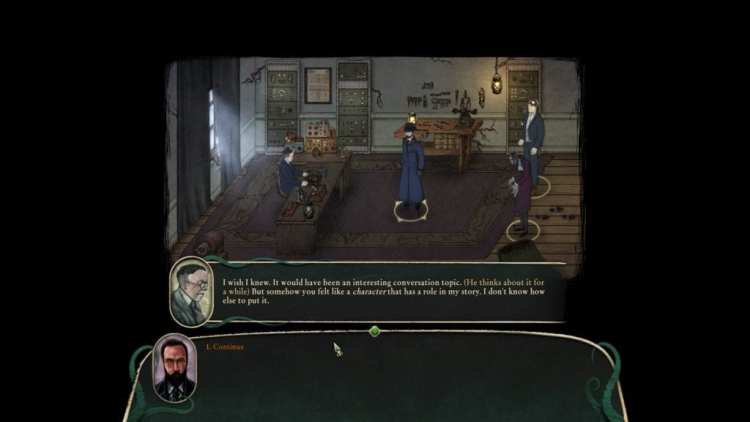 Hey, careful with that 4th wall there!

The obfuscation does not extend to the environment. For one thing, Stygian: Reign of the Old Ones massively improves your life by highlighting interactive pieces of the scene via simple “alt” click. However, once you bring up the radial menu for a certain object, you may find that your Science or Investigation skill is too low to make anything more than a simple observation. Then again, finding an item that you can actually investigate with, say, your Occult skill is always a pleasure. There are also hidden objects that can only be interacted with once your character spots them via having a high enough skill.

Stygian: Nap of the Old Ones

However, as far as I’m aware of it, the soft skills (read: anything non-combat) of your companions don’t matter while exploring. You can’t boost your own eloquence with a silver-tongued NPC, nor can they help you craft new things. Those skills start mattering a lot more, however, when you go to rest. And you will need to rest. Left to their own devices, a character will eventually get exhausted, incurring a stat penalty. Under your control, a character will inevitably get hurt and see their sanity strained. Those are commonly agreed to be bad things. 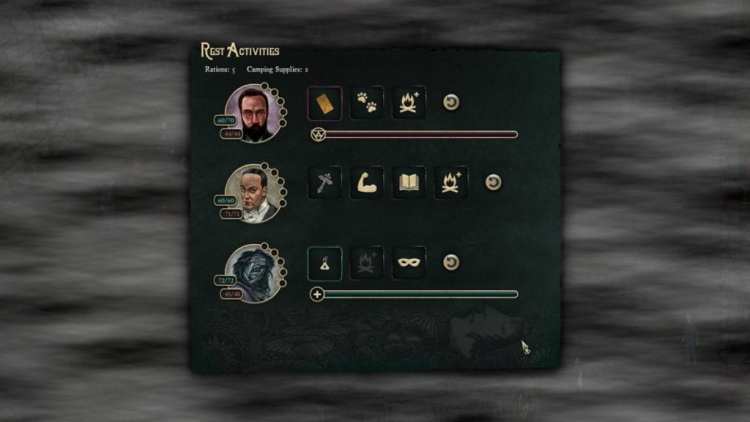 That’s why you pay for a bed or huddle next to some hobos at a campsite. But rest is more than just dozing off like in an Elder Scrolls title. In Stygian: Reign of the Old ones, you have a rest action point pool for each character (not henchmen). You can assign tasks to them depending on their skills and items in your possession. So, a scientifically-inclined character might be trying to unlock the mysteries of opium (to learn to make refined opium, obviously) or devise some new contraption, an Occult scholar may learn spells, and so on. Oh, and since this a mythos game, Stygian features some adventures in the dream realms.

And while regular exploration in a world gone insane will be enough to shred your characters’ health and sanity, battles will be the real culprits. First off, you will take hits to sanity simply by engaging in a fight with otherworldly foes. You may also encounter attacks that sap your will – and you’ll lose just by suffering critical hits. Things get even tenser if you’re an occult-oriented character. All spells cost AP and sanity points – and sometimes more! Luckily for you, the game encourages you to run away, and if you do it via Progression escape (unlocked by staying in the battle for some time), you’ll even get all the XP you’d receive by winning!

Confessions of a Yankee Opium-Eater

So, a fight in Stygian: Reign of the Old Ones is a fight to both stay alive and stay sane. Luckily for you, fights don’t happen too often, you usually have friends, and you can even the field with some magical help. If you don’t have magic, you’re probably some science nerd that can whip up some grenades… Or, maybe you’re just the type of character than is good at beating people up. You may also have up to 3 allies (2 companions, 1 henchman).

Battle maps are small, never bigger than the screen, and while cover exists, it’s not nearly as important as in something like XCOM. Usually, you will use the environment to funnel enemies and allow you to engage them piece-meal. And when you’re free to move, you’ll try to strike the enemy in the back. Most enemies will flee when heavily wounded. All in all, combat in Stygian builds on simple methods that work and is quite fun. 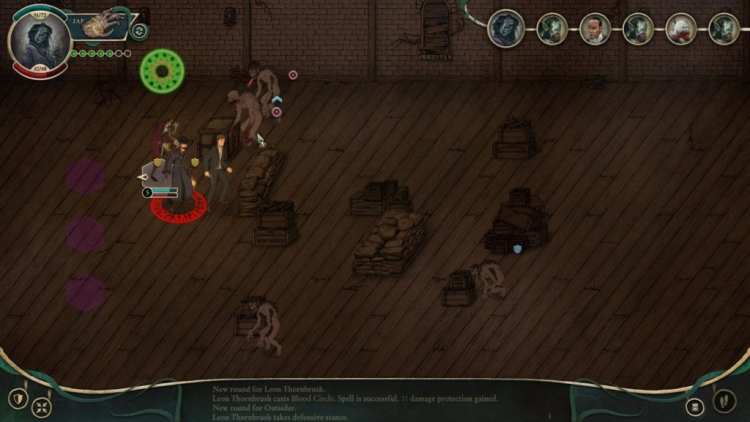 Ghouls: better at seeking cover than Call of Duty enemies

It’s even more fun for your characters, as they’ll be high as a kite. Human flesh is weak, and even finding a shotgun may not be enough of an equalizer. Fortunately, in Stygian: Reign of the Old Ones, the mob has taken over Arkham – which means that you have easy access to drugs and booze. Laudanum shots are basically your medkits in the game, restoring some health and sanity while carrying only a low chance of addiction. Closer to the end of the game, you’ll be snorting blow, injecting morphine, and maybe even cooking up some strange things to give you an edge in combat against mythos critters. If this were a game set in the modern era, you’d be facing down The Black Goat In the Woods zonked out on ketamine.

But Stygian: Reign of the Old Ones is set in the 1920s, and the setting is lovingly recreated in lavish details (and described in great prose). The environments are as beautiful as they are evocative, and even the simple 2D character animations look great. What’s more, selecting a character portrait in the game actually affects the way your avatar looks! All in all, I have little to no criticism of the visual or the audio parts of the game.

Criticizing Stygian: Reign of the Old Ones

I do have some issues, though. For one, it’s strange that sanity is as easily restored as health. Run out of it and you’re the same as dead (it’s actually possible to render human enemies insane). The real stress on your mind accumulates in the form of “Angst,” which levels up and forces you to choose a defect – a negative trait. All of them are bad, but some are so terrible as to be obvious options to avoid – your mind must be really shattered by the horrors of the beyond if you choose a 25% penalty to XP gain. Most of all, I’d say, it’s an issue of naming. But there’s also balance at work, too, and a bigger impetus for roleplaying would be to tie dialogue-based regeneration to actually lowering Angst. 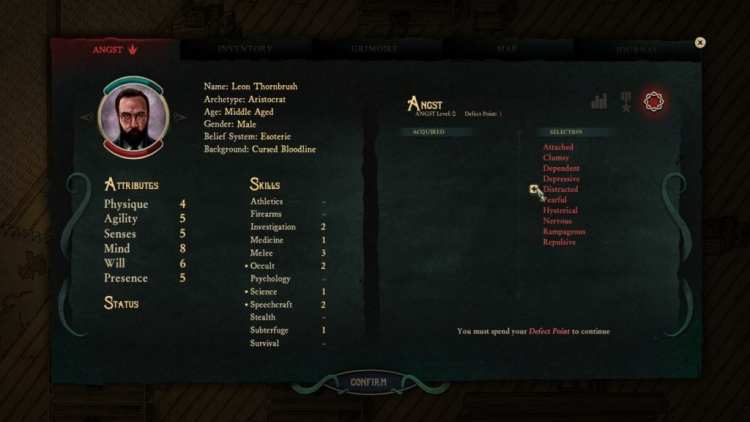 I’m going to go with “Distr

Another thing would be that the beta I played up to launch had progressively more and more bugs. Towards the end of the game, Stygian: Reign of the Old Ones would freeze and crash more and more often, as if providing a meta-commentary on my characters’ fraying being. The newest patch does seek to address many of the issues, though – and it also invalidates old saves, making testing the improvements a somewhat time-consuming proposition.

Conclusion out of space

Here is where I should note one thing: the game is shorter than you’d expect, and it ends somewhat abruptly. The developers addressed it in a Kickstarter update dated five days before release. All in all, I accept their reasoning. I enjoyed Stygian: Reign of the Old Ones and wish it had gone on for double the length. As it stands, the 15-20 hours of gameplay don’t cover the entirety of the planned 50-hour plot. I can only hope that the rest will be introduced as DLC or a sequel.

Nevertheless, I enjoyed every moment of playing Stygian: Reign of Old Ones. There may be questionable decisions in including such a wide variety of mythos creatures in a single release, but the decision to set the game basically after the end of the world (as far as Arkham is concerned) is a fresh take. Stygian oozes atmosphere, craft, and effort. I love it, it’s great, and you should play it.

Stygian: Reign of the Old Ones will not reveal all of its secrets, but it's an amazing ride all the way through.