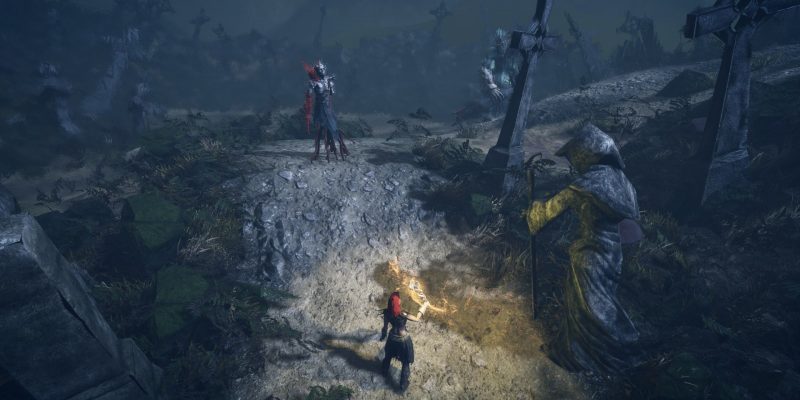 I’ve been a fan of deck-building games since trying out Munchkin in high school. After that, I was treated to Star Realms, a tabletop card game that’s since become my baseline for any deck-building game. It has a combination of meticulous strategy and resource management that made building the perfect deck a fun, luck-based mess. After learning that Tainted Grail: Conquest was a deck-building roguelike title, I couldn’t help but be excited to play it. I’m a huge fan of both genres, so blending the two must result in an overall fun experience.

For the most part, I was wrong. Tainted Grail: Conquest has some brilliant ideas and moments. When you have a deck that absolutely decimated the enemies in front of you, the feeling is simply empowering. It’s a thrill to blast through enemies and destroy each one with a single card after meticulously planning the order you play your hand in. When everything in Tainted Grail: Conquest is going well, it’s a fantastic and enthralling experience.

Sadly, those moments are few and far between. The game is rife with balancing issues and unclear instructions. Visually, it’s all over the place. It will introduce some truly horrific enemies in one combat encounter and then gives you an ugly, poorly designed area boss. The bones of Tainted Grail: Conquest are solid. The game just needs some heavy refining to compete with the likes of Slay The Spire. 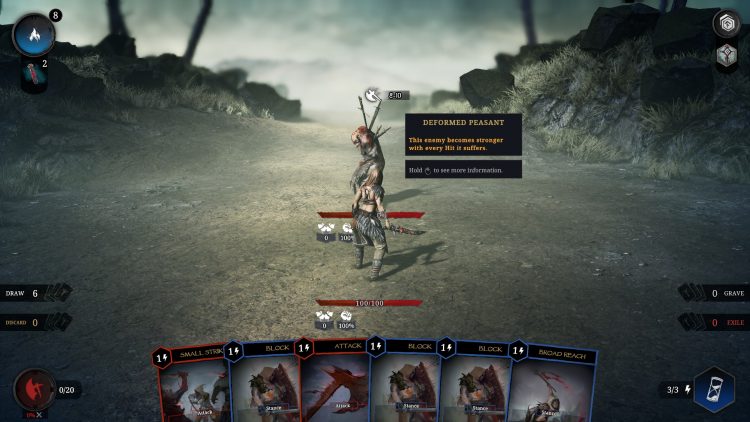 As grim-dark as you can get

The story and setting of Tainted Grail: Conquest are about as nonsensically grim as you can get. The king sends your character, along with a group of others, away from England to a mysterious island. As it turns out, an evil element resides on the island called The Wyrdness. It’s a malicious force that eventually swallows you and everyone else there. A walking, talking goat then rescues the player and tells them that they’re essentially the “chosen one” that can fix this mess.

From there, players are thrown into an initial encounter they’re designed to lose. Afterwards, the real game opens up. Players are introduced to a small town that they can gradually fill up with various NPCs, all of whom are horribly depressed, dejected, and barely clinging on to life. If you want a feel-good experience, Tainted Grail: Conquest isn’t it.

Instead, Tainted Grail: Conquest is more of a horror title, especially when you consider the creatures players will encounter. While some enemies are fairy-tale baddies, like a headless horseman or one-eyed ogre, others are grotesque abominations. Body horror is the name of the game here. Some enemies have multiple arms and hands wielding rusted swords, while others that blend human anatomy with nightmarish creatures. These designs are genuinely fantastic and make every fight against enemies in the game interesting to watch.

That said, not all enemies are built the same. Some are simply low-quality, like the game’s deer that you can hunt, which I believed to be static models at first glance. Later in the game, a boss melded into a tree similarly shocked me with its lazy design. It’s split into three parts, the body of the tree and two large wooden arms off to its sides. The body itself moves and is impressive to look at, but the arms are completely separated from the body and don’t move at all. 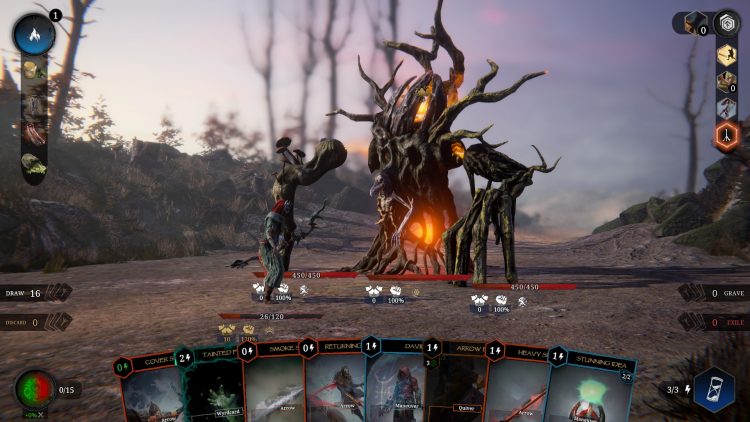 Rip and tear, until it is done

Tainted Grail: Conquest tasks the player with beating back the Wyrdness. To accomplish that, they have to destroy four bosses in four areas and eventually defeat a final boss. Thankfully, each boss fight is unique, due in part to different mechanics between each and the multiple classes players can pick at the start of a run.

Altogether, there are nine classes to choose from in Tainted Grail: Conquest, with each split into three groups. You have archers, melee, and magic users, and each class itself has its own unique passive ability and an ultimate ability. However, these classes either feel unbalanced, take more time to learn than others, or just aren’t fun. I tried out each class in the game and settled on two as my favorites: the Apostate and the Summoner.

The Summoner can, as its name suggests, summon creatures to fight for them. The trick here, though, is that you can continually boost the power and HP of these creatures with no upper limit. With the right combination of cards, you can end up with a summoned creature that can take out entire groups of enemies in a single attack. It’s an incredibly satisfying class to use, one that requires a bit of planning and resource management.

On the other hand, the Apostate is easily the most overpowered class in this game. The Apostate centers around special maneuver cards, which gain different effects with each use. Using a card will make it flip, giving it a different ability and building up your ultimate charge. With the right cards, you can turn this character into a self-perpetuating machine that continuously draws maneuvers and builds up more ultimate charge with each play. Even with only three energy available at the start of each turn to play cards with, players can build up a full ultimate charge with some careful planning. It makes Apostate’s lethal from the start of an encounter. 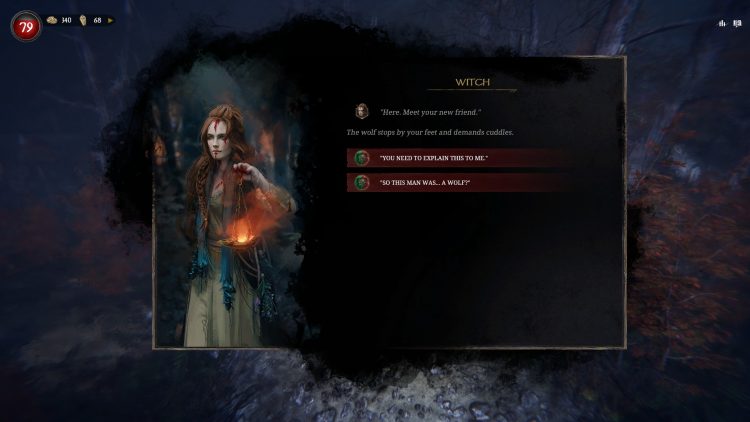 I don’t know if the developers of Tainted Grail: Conquest will read this review. But if they do, please, please do not change anything about the Apostate. Using this class to absolutely demolish every enemy in sight by playing your entire deck and subsequently dealing over 100 damage with a single shot is thrilling.

In between systematically ripping apart enemies (with the Apostate of course), players will also run into different NPCs and random encounters in the game’s four areas. Players can recruit some of these NPCs and give them a place in their town. You can also redeem NPCs and save them from the Wyrdness if you complete their line of quests. In all, these encounters add something extra to each run. It’s something different to progress through besides the standard five boss fights.

The NPCs you can recruit offer some extra bonuses, as well. After starting a run or completing an area, you can head back to your village and buy upgrades, items, and other benefits from NPCs that have settled there. The candlemaker for instance sells magical candles that fend off the Wyrdness. The game’s blacksmith can sell you runes to attach to your weapons and armor that give you passive buffs.

Some of these NPCs also come with their own special currencies, although gathering them isn’t always clear. For example, players can upgrade the blacksmith’s tools with Rune Dust, which you get by merging runestones. For the longest time, I thought that meant merging runestones, which you can do at the blacksmith. Instead, to get Rune Dust you need to gather three of the same type of rune. Then you’ll be able to merge them to earn the currency. A better explanation of what merging was would have saved me some time and frustration in this case. 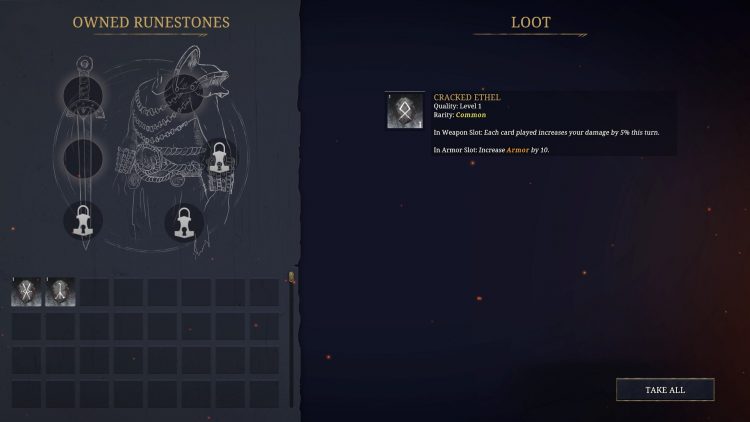 So far, I’ve put nearly 15 hours into Tainted Grail: Conquest, and I’m on a run that leads me to a fight with the game’s final boss. From there I still have even more NPCs to recruit and redeem and quests to complete. Completing all the content in this game will probably take me at least 10 more hours, but I’m going to have a blast doing it.

Sadly, I’ll only be playing as one of two characters. The Apostate and Summoner are simply too good for me to let go of and represent some major balancing issues present in Tainted Grail: Conquest. I wish I had more fun playing as a majority of the game’s classes. I just couldn’t get into them.

Tainted Grail: Conquest is very nearly a great roguelike deck-builder. It has all the right parts and all the right ideas, but some of its execution simply falls flat. With a few updates addressing its largest flaws, this game could easily be the next to consume hours of my playtime.

With some major balancing issues that made a majority of its classes unenjoyable, Tainted Grail: Conquest redeems itself by showing that when the game was balanced, it could be a fantastic experience.

We won’t be graced by BlizzCon, as it’s canceled for 2021