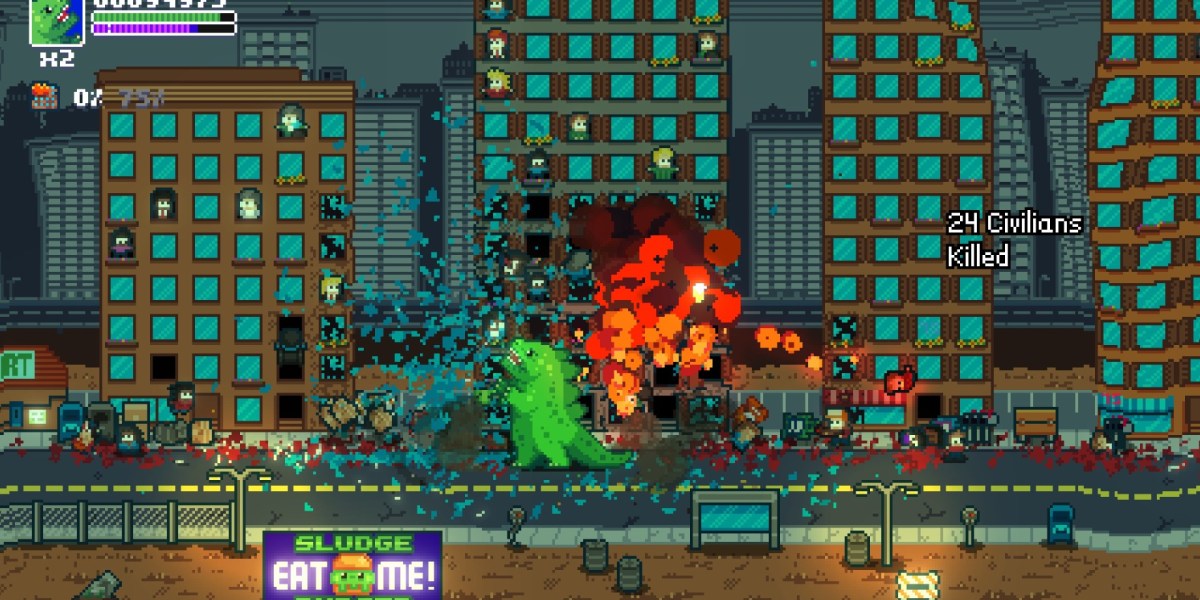 The Rampage games were never great, per se, but they were fun. A giant monster destroying a city? That’s ripe for video games. Strangely, the franchise was mostly left for dead and, even more strangely, no one ever really saw fit to copy it. Terror of Hemasaurus is very much intended to look and play like a superior version of Rampage, which it surely excels at. But surprisingly, it’s the game’s penchant for satire and blistering humor that helps cement it as more than just an improvement on the Rampage idea. It doesn’t last long, but destroying cities as monsters has never been better.

Terror of Hemasaurus begins with zero subtlety. The dastardly Richie Hoarderson is having a debate with a climate scientist warning him of the dangers of climate change. Hoarderson assures him and all those watching that climate change has no bearing on the lives of the people at home. It’s not like it’s a giant monster hellbent on destroying us all. In the background, a large piece of ice clearly imprisoning the titular massive lizard breaks loose and begins to drift. When Hemasaurus gains consciousness, it’s greeted by the head of a cult that worships it. The cult’s goal: to spread destruction to make people start caring about the environment.

It isn’t a particularly large leap to assume that the game is going to preach the virtues of going green while shaming our habits. More than one person on the game’s Steam discussion thread went through the opening in the demo and was so incensed that “politics” were infecting the game that they would certainly not be purchasing it. The game’s developer responded by suggesting that the user play Putt-Putt Saves the Zoo instead, as that game would be far less “political.” It was very funny. But Terror of Hemasaurus isn’t that sort of game anyway. Instead, it’s a comedy with a very specific message: humanity itself is just terrible and the things that befall us often don’t stop simply because we don’t really want to stop them. There are a fair amount of little cutscenes that lampoon gaming and society. The dev briefly puts himself in the game, but not in an overly indulgent way.

This is easily one of the funniest games I’ve played in recent memory and it’s kind of worth playing for the story bits alone. There are also aliens commenting wryly on everything they see. When you get a game over, they criticize the dev for making a pointless video game instead of trying to do something productive.

The game is broken into three chapters with a combination of levels and bonus levels. Most levels follow the classic Rampage template. You’re meant to walk from left to right, destroying the city while keeping your monster alive along the way. There are four playable characters and the game has four-player local co-op. There’s a choice between the story mode and an endless mode. The story mode will probably take around two to three hours.

Playable beasts include Hemasaurus, a mecha version of Hemasaurus, a giant sloth, and a giant salamander. They all mostly play identically, save for their ultimate attack. The mecha has my favorite one, which fires off a rocket that produces a huge explosion.

Each level has different objectives. The usual one is to destroy at least 75% of the buildings, but there are levels where you need to kill a certain number of people or wreck vehicles. At the end of each level, you’ll have done tens of millions of dollars in property damage and killed hundreds of people. The spritework might be cutesy, but the streets will be paved in gore by the time you’re done. The bonus levels are very brief and usually have you destroy a certain number of things as quickly as you can. Do the butt stomp

When Terror of Hemasaurus first started, I was briefly disappointed by how similar it seemed to Rampage. Yes, you can climb up buildings and slowly punch them to pieces to knock them down. But that’s actually kind of pointless. This game has physics and mechanics you can utilize to demolish buildings much faster. You can climb a building and then press up at the top, which will give you some air above it. Then you just press a button to slam the ground and damage the foundation. Damaging the center will result in a controlled demolition that sees the building sink.

But doing enough damage to the sides of a building will cause it to topple in that direction. A toppling building will then damage any buildings or people in the way. You can also kick cars and tanks into buildings, which will often demolish them instantaneously. You’ll also see helicopters and blimps. You can jump on these and punch them until they go down, which will result in an explosion that will also demolish buildings. Terror of Hemasaurus has the tendency to devolve into pure chaos the likes of which I’ve rarely seen in games, save for Earth Defense Force.

Your kicks naturally work on people, too. Kicked people will kill other people as they smack into each other. You can also pick them up and throw them in any direction. This is great for taking down helicopters, which you can do by throwing people into the rotors. No, Terror of Hemasaurus doesn’t fuck around, thanks for asking. You can even pick a person up, throw them straight upward, and then pick up another person and throw them into the one you just threw. SPLAT. Give me the saucer NOW

There are other silly additions too, such as giant metal balls you can kick to demolish buildings. There are also giant trampolines sometimes because why the hell not? As for the endless destruction mode, it’s just like the Rampage arcade game in structure, only it really is endless. The threat level goes up to 10, so you’ll contend with greater threats as you go in. I will say, characters in this game can get melted very quickly despite being giant monsters. An enemy with an assault rifle can take away half your health in a second if you’re not careful. Granted, you heal by eating people but that’s slow going. Still, as long as you’re careful, the game is pretty easy.

To help things stay interesting, Terror of Hemasaurus has modifiers that you can unlock for its endless mode by getting the game’s achievements. You can turn on cheats like invulnerability and infinite ultimate as well as put yourself into the tank or UFO for more insane destruction. You can also specify how many people you want or what the background looks like. The only thing I’d really like on top of this would be a literal endless level that just keeps going indefinitely, although I’m not sure if that would even be possible.

If you like mean-spirited, brutally honest satire and are itching for a better version of Rampage, Terror of Hemasaurus is pretty much a must-play. It’s short and it could do with some more longevity in its endless mode, but the satisfying destruction physics and ridiculous chaos make for a fun time if you’re into Kaijus destroying things. And if you’re a misanthrope you’ll finally have a game that encapsulates your philosophy.

Between the charming pixel artwork, hilarious satirical story, and insane destruction, Terror of Hemasaurus is a winner.