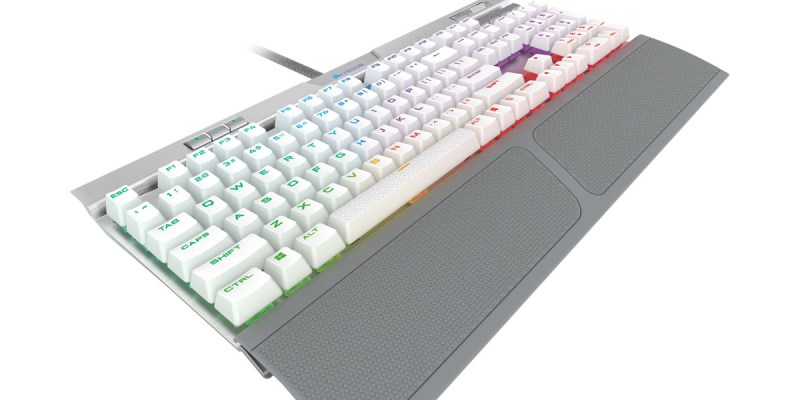 A keyboard is the focal point of most PC gaming setups. And it’s not just the main way you interact with your PC. It’s the centerpiece of your desk, too, and making sure you’ve got the right one to compliment your space is important. Luckily, you’re spoiled for choice when it comes to which keyboard you could get. But for now, let’s focus on the best white gaming keyboards.

A clean, white, minimalist setup is all the rage these days, and for good reason. It looks great for one thing, but also allows your setup to stand out from the rest. It can all fall apart without the right keyboard, though. So we’ve rounded up some great-looking and highly functional white keyboards that should appeal to different tastes. And all of them are available now. 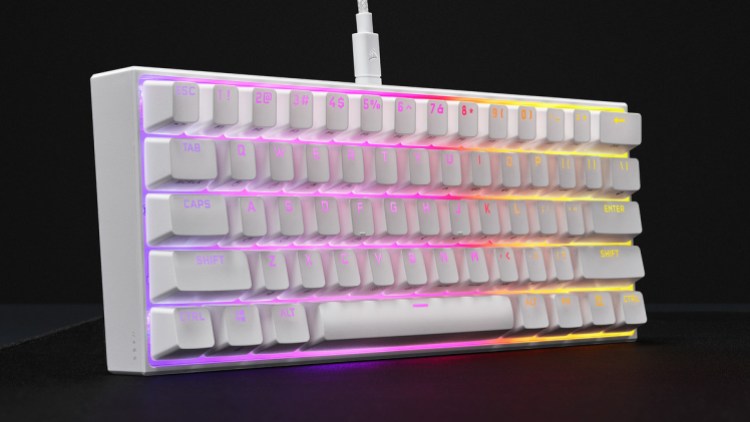 We’re starting off with a slick keyboard that’s perfect for those who don’t want the extra bells and whistles of a standard choice. The Corsair K65 RGB Mini was released in March last year with positive critical reception. Its smaller size is perfect for those with less space to work with, and its performance for gaming is seriously impressive as well. Of course, it also comes loaded with RGB lighting, customizable with Corsair’s iCUE software. Alongside the white, the colors pop in an awesome way and you can alter it to look just the way you want. The Cherry MX Red mechanical switches also provide a satisfying typing feel.

Corsair’s K65 RGB Mini keyboard isn’t absurdly expensive, with an MSRP of $109.99 USD. Therefore, it should be a great addition to a setup as a white gaming keyboard. The obvious caveat is that it loses the functionality of a standard keyboard layout. Be sure to check out our review on it for more detailed information. 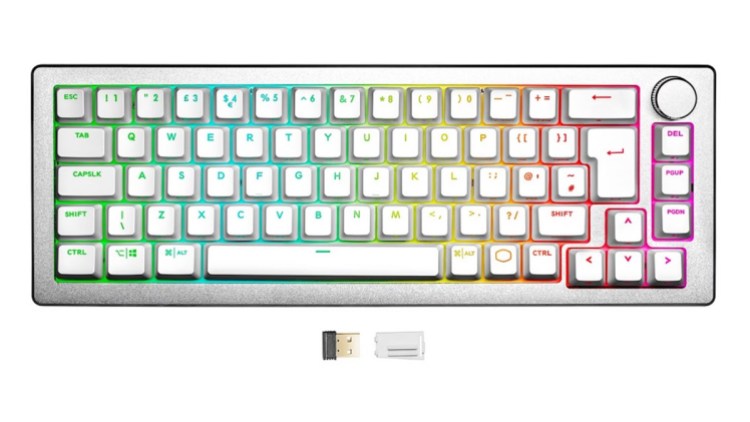 In keeping with the smaller keyboard theme, let’s take a look at Cooler Master’s CK721. This is a 65% format keyboard, so there are a few more keys on the right-hand side to make use of. There’s also the addition of a dial that can be mapped to whatever input you want with the accompanying software. This keyboard also has the added bonus of being wireless. So for those who want to take the clean look even further, this would work well. The CK721 uses red, blue, or brown TTC switches.

Cooler Master’s CK721 white gaming keyboard isn’t too expensive either, with an MSRP of $119.99 USD. However, as mentioned, with a 65% keyboard you lose out on a lot of handy functions. But if this is the sort of keyboard that you’re looking for, you can’t go wrong here. And since it’s wireless, it gives you a lot more freedom with how you want to use it. 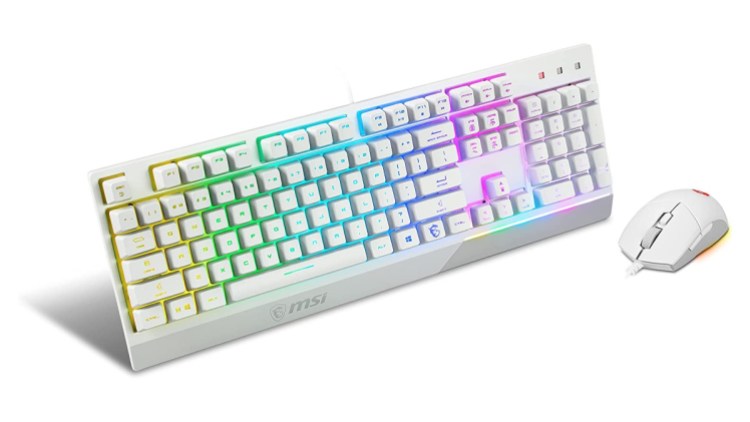 The MSI Vigor GK30 is more of what you’d expect from a standard keyboard, but with a low price and great functionality. Again, we’ve got a full RGB backlight which works brilliantly with the white color scheme. It’s also water repellant, which is perfect for those who are unlucky with liquids. This isn’t a mechanical keyboard, though, so you may not get the same satisfaction here as you would with other options.

The $49.99 USD MSRP for MSI’s Vigor GK30 is a price that’s very fair for what you get. But even though it’s a full size keyboard, it doesn’t have handy things like volume or media controls. Which is something that can come in handy often. But as far as white gaming keyboards go, this is a solid option for a decent price. 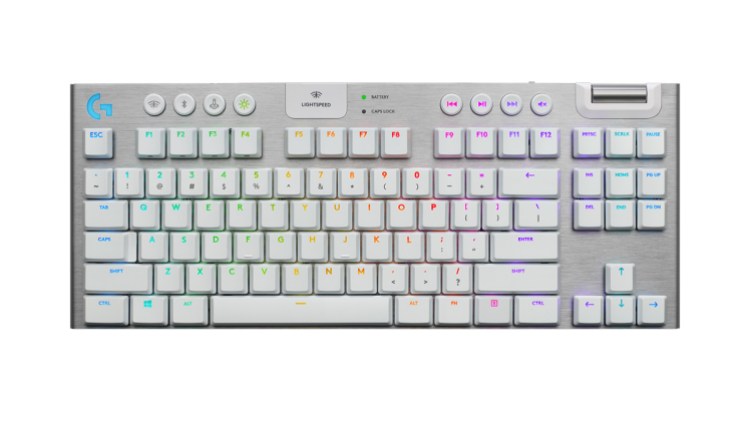 The Logitech G915 Lightspeed mechanical tenkeyless (TKL) keyboard has basically every feature you could want. Mechanical switches, wireless functionality, RGB backlighting, media controls, it seriously has a lot. This doesn’t come cheap, though, as it’s got a pretty hefty price tag. But for a keyboard that does almost anything you could want, it makes sense. Admittedly we’re missing the number pad, but whether that’s a deal-breaker is up to you. The frame of the keyboard also has a brushed aluminum effect, which makes it that extra bit fancier. 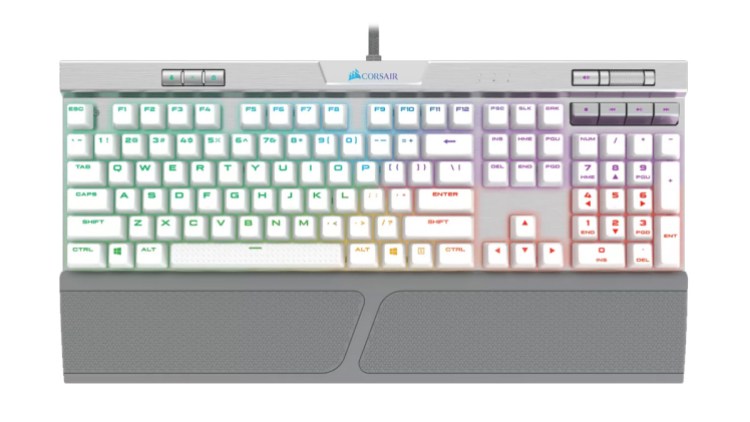 Rounding this list off is Corsair’s K70 RGB keyboard, and for something that delivers the best overall experience you can’t go wrong here. It comes with most of the features you’d want like media controls, RGB backlighting, a number pad, and also a comfortable wrist rest. It’s no wireless, however, so you’ll still be tethered to the nearest USB port. But Corsair made sure to make the cord gray so it wouldn’t spoil the white theme.

At an MSRP of $179.99 USD, it’s on the somewhat expensive side of the spectrum. It might be quite pricey for some, so waiting for a sale wouldn’t be a bad idea. If you want to find out more about the Corsair K70, be sure to check out our review for it.

Keyboards come in all different shapes and sizes, and the few we’ve chosen here are no different. Each one should suit different types of setups. But whichever one you go for should fit right at home if you’re leaning toward a white theme. If you’re struggling to decide which would be best, take a second to think about how you use a keyboard. If you don’t bother with the number pad or media controls, then a 60% one may be perfect. And if you often find yourself wanting to move the keyboard to a more comfortable position, something wireless would be best. There’s a lot to consider, so take your time and figure out which the best white gaming keyboard would be for you.