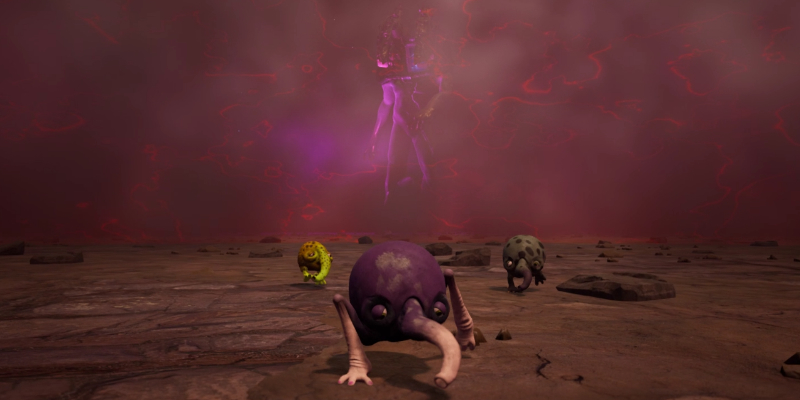 First revealed at gamescom over two years ago, The Eternal Cylinder piqued my interest as an especially unique-looking adventure game. For the first time in 13 years, it felt as though a potential successor to Spore had surfaced. After playing the full game for this review, I can now confirm that is not the case.

Instead what I’ve found is something even better. A deep narrative-focused title that pushes the creativity of game design to its limits. It may use evolution as a core mechanic, but unlike Spore, this game has an in-depth story that is driven by said evolution. It’s this difference that elevates The Eternal Cylinder to levels Spore could only dream of.

The Eternal Cylinder takes place in a strange foreign world ruled by unnatural forces. Only one thing is clear, the so-called Eternal Cylinder is a constant threat that will kill everything if it isn’t stopped. Large towers are triggered, which hold the Cylinder in place for a period of time, but a permanent solution still evades the Trebhum.

The Trebhum are a highly adaptable species best known for their ability to rapidly evolve. By consuming certain items, a Trebhum can mutate and gain new powers. They may start off at the bottom of the food chain, but this unique ability has the potential to turn them into the most powerful of creatures. 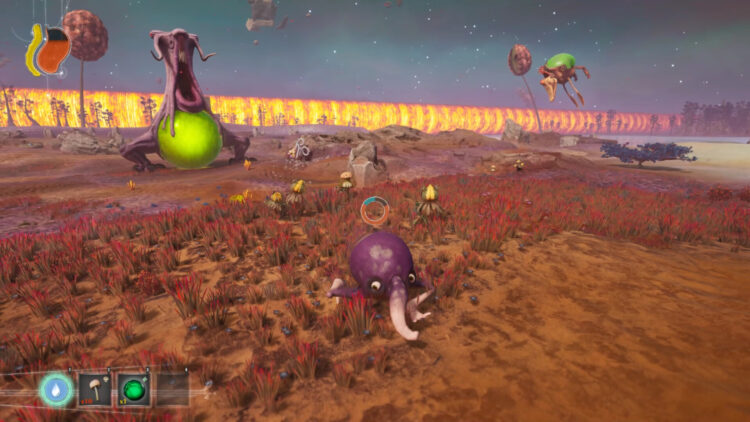 It is worth knowing that The Eternal Cylinder is very linear. Despite its somewhat open-world design, areas can only be explored when it is necessary for the story. This helps the narrative to flow more smoothly but limits player choice. Those looking for more of a sandbox experience will likely be left disappointed.

I don’t want to go too in-depth regarding the story, as spoiling it would be a shame. I think that the narrative of The Eternal Cylinder is its main selling point, so I’d be doing both you and the game an injustice by ruining that. Regardless, I will say that the story did an impeccable job of keeping me engaged. I was consistently eager to see the next major plot point unravel and you can’t ask much more from a story than that.

As you progress through the story, you’ll encounter various challenges. These challenges usually come in the form of puzzles that can be solved through a variety of methods. The most common solution is to find the necessary mutation that provides the power to complete the objective.

There are over 50 unique mutations that vary in usefulness. Some provide marginal improvements to combat prowess, whilst others completely overhaul movement introducing large jumps and even flight. Acquiring a mutation is usually straightforward enough as all you have to do is pick up and consume the corresponding item. But some require an extra step like breaking open a shell by throwing the contents at a hard surface. 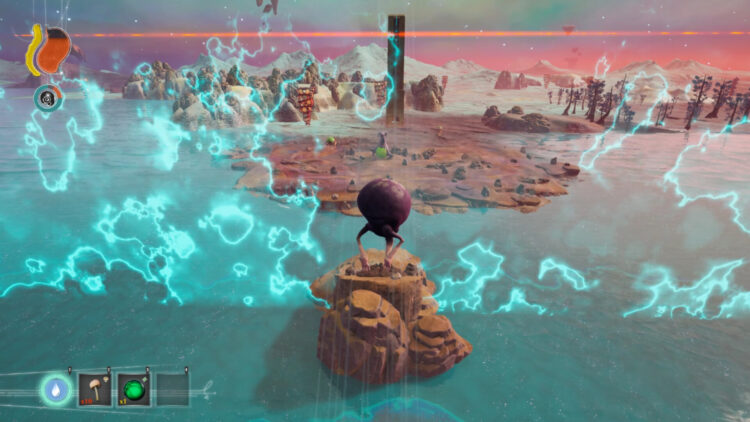 Although some mutations overlap with each other, the majority can stack up to create a god-like Trebhum. Although, there is still a risk of death even with tens of mutations accumulated at once. Dying causes you to lose all of the mutations that were given to that specific Trebhum. For this reason, it’s best to spread them out and create a well-rounded herd that can tackle all sorts of challenges.

The early game restricts you to a smaller herd, but this grows over time. Eventually, it’s possible to have an excess of 20 different Trebhums at your disposal all at once. Whilst figuring out a way to conquer the Cylinder, it’s important to also manage your herd. Basic survival mechanics like hunger and thirst come into play and can kill your family if not managed properly. This adds an interesting secondary challenge to the gameplay which although not too difficult can get hazardous if ignored for too long.

Given that The Eternal Cylinder is more focused on delivering a great story above all else, accessibility is important. Developer Ace Team has made an effort to implement options that assist players not wanting as much of a challenge. These mostly reduce the aggro of enemies creatures making it harder to die. 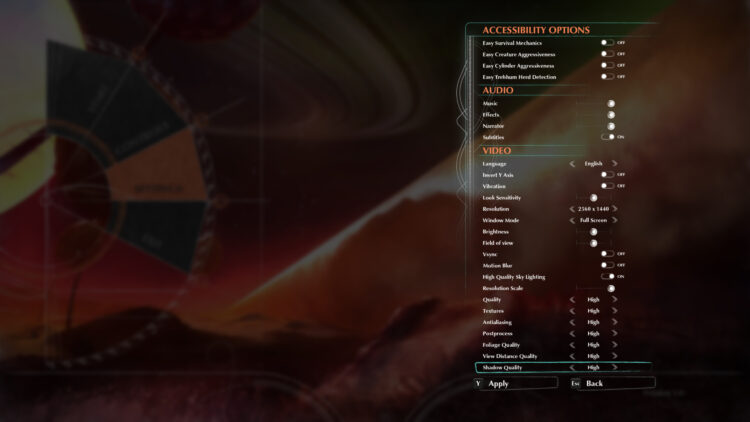 This and the option to make the survival mechanics easier by cutting the rate that the hunger and thirst meters deplete by half are nice inclusions. However, there are still parts of the game that can be difficult to figure out. Certain puzzles aren’t all that easy and can even get frustrating. There are times that The Eternal Cylinder uses the story’s wonderfully voiced narrator, courtesy of Kevan Brighting, to offer additional guidance but this isn’t common. It would be nice to see the narrator used more or an additional text-only option that provides hints when needed.

In this industry, it’s often unclear what so-called “good graphics,” even means. What does a game have to look like or do to stand out? I don’t subscribe to the idea that world-class visuals are defined by state-of-the-art engine work. Or that a game must have true-to-life visuals. While these can be impressive in their own right, for me it’s the artistic direction that truly defines a great-looking game. 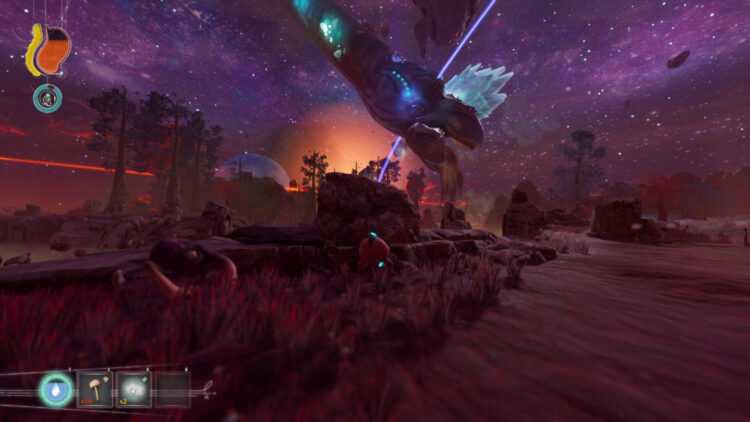 The Eternal Cylinder is one of the finest examples I’ve ever seen of near-perfect art direction. Yes, the models and environments are nice, and that’s important, but it’s the underappreciated aspects that help it stand out. From the consistency of visual design throughout the game to its stunning SFX and particle effects, The Eternal Cylinder‘s visuals are special. It’s rare for me to stop, look around, and appreciate what I’m looking at. But that happened several times playing through this game.

I can’t get enough

With some games it’s obvious early on that they are going to be good. In the case of Eternal Cylinder, I had already decided within the first couple of hours that Ace Team had delivered a quality product. Moving further through the story merely cemented that thought. It isn’t a particularly complex game due to its strict linear progression, but that doesn’t really matter.

Having an extremely compelling story supported by good gameplay mechanics and first-rate visuals is more than enough to produce something well worth playing. Just about anyone who values a well-written story above all else should consider checking out The Eternal Cylinder. It is a wonderful game that will leave most people more than satisfied.

The Eternal Cylinder is a gorgeous adventure game that features one of the most compelling stories I've seen in years. Its strict linearity may be frustrating for some, but that slight downside is vastly outweighed by this game's many strengths.