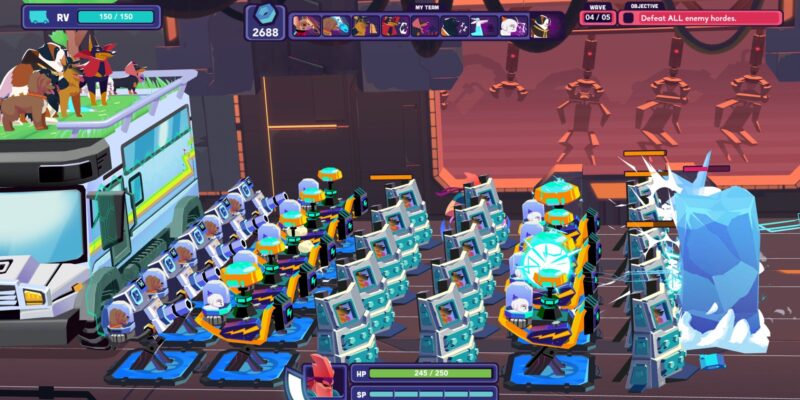 As a general rule, I don’t care much for tower defense games. The Last Friend is a combination tower defense and beat ’em up, set on multiple lanes like Guardian Heroes or Streets of Fury. Well, those are just beat ’em ups, but you get the point. I didn’t expect to get much out of the game and, while it’s often too easy and I wish it had some options for tough post-game play, I got a lot of enjoyment out of this one. The combat’s great, the abilities are fun, and the visuals are cute, adding up to an enjoyable experience, even if you’re not crazy about dogs.

The Last Friend puts you in the shoes of Alpha, a guy with a beard that’s good at punching things in the head. While traveling in an RV with his partner, a chihuahua named T. Juan, they decide to go about rescuing dogs. There’s a plot here about a madman trying to destroy the world so that it can be a doggie paradise, but it’s not all that important. Regardless, the dialogue is pretty good for what it is, as it can be amusing.

At first, there are only three lanes you can maneuver between. You simply press up or down to swap between them. Turrets, traps, and utility devices can be placed in grids in these lanes. Your ultimate goal for most levels is simply to protect the RV from getting totaled. Early on, you get upgraded to five lanes. You can get stars to permanently upgrade certain things by keeping RV damage below a certain threshold. These upgrades affect such things as the amount of scrap enemies drop or how large of a shield your RV has. Surprisingly, The Last Friend is mostly insanely easy, and I got three stars in every stage but two with very little effort. 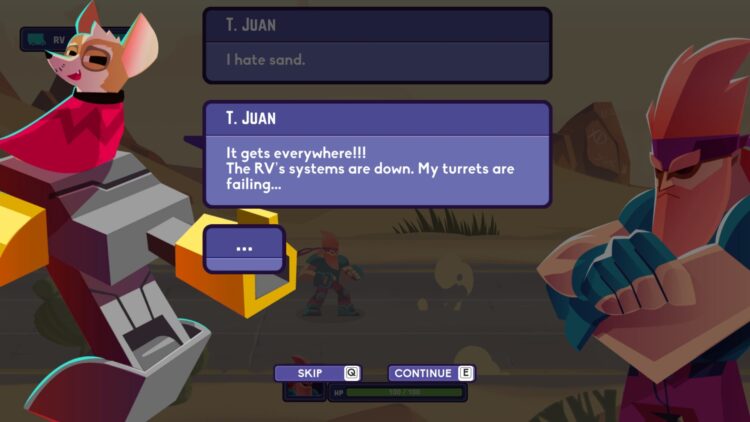 You’ve got a friend in me

Alpha can move freely among the lanes during gameplay, punching and kicking wherever he pleases. He’s got a strong and heavy attack, which can be combined for combo attacks. Alpha also has a stamina bar for specials, plus a counter that blocks an enemy’s attack and damages them instead, which is also basically a special since it takes up an entire chunk of stamina. Combat is very responsive and feels awesome, and I never got sick of knocking the crap out of everything.

In fact, it’s good enough that The Last Friend has entire levels that aren’t related to tower defense. These have various goals, but they usually see you defeating all of the enemies or fighting a boss. One has you collect vegetables. What? These give you stars based on how quickly you clear them, as you don’t need to protect the RV at all during these sections. Although the game focuses on the defense levels, there are plenty of these one-off levels to break up the action. Most of the boss battles are quite fun as well, even if they’re just as easy as the rest of the game is. Well, save for the last couple, but you can cheese them by spamming your counter.

As for the tower defense and skill aspects, those come down to the dogs you bring with you. I’m being literal here, as every additional ability that I haven’t already described has a breed of dog associated with it. At the end of stages, you usually rescue a single dog and they join your team. You then get to name them. Yes, I rescued every dog and gave each and every one a unique name. While many dogs are mandatory, some are optional. A few are tied to side quests that require you to beat stages with specific loadouts, which are some of the only times The Last Friend is challenging. 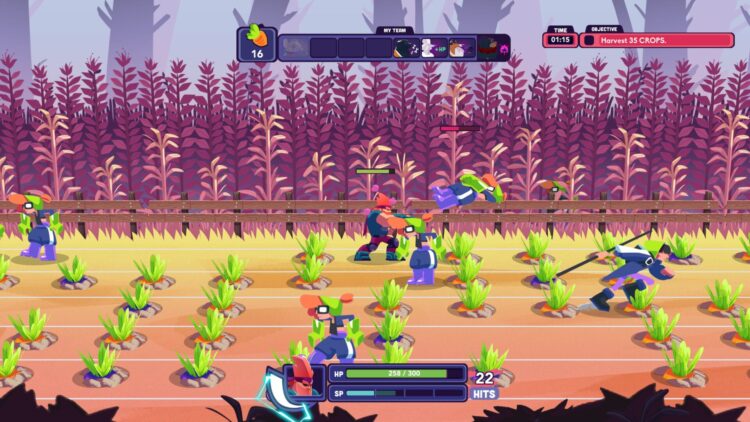 The three branches of doggerment

Dogs are designated into one of three categories: turrets, abilities, and specials. Turrets can all be placed in the lanes themselves. My favorites are a wall that enemies must destroy to keep moving, a water blaster that slows enemies down, and an electric turret that shocks the hell out of enemies. In fact, these three turrets are so good that I never needed to use any others, as making good use of them along with upgrades made me practically unstoppable.

Your loadout can be comprised of a mix of turret and ability dogs, but it’s up to you. A lot of the abilities can be very useful, though, especially ones that buff your attack or grant you lifesteal on hit. One ability lets you heal turrets you’re standing near, which is very helpful, especially once it’s upgraded. Specials require you to fill a meter and then unleash your special, which varies based on which dog you’ve equipped. These are separate from the rest of your loadout, so you’ll always have exactly one on you. My favorite special is a dog that lets you heal yourself and your turrets. Most of the others are based on damage.

As you beat enemies down, they drop dog treats, which you can take to Lupe, who’ll use them to cook upgrade dishes for your dogs. You can raise any dog up to level 3, which has varying affects. For turrets, you actually have to use scrap dropped by enemies to upgrade them during play. Abilities get additional use when upgraded, though, such as the turret healing dog, who allows you to heal turrets faster, as well as heal multiples simultaneously. Upgrading your dogs and choosing the right loadout will make a massive difference. 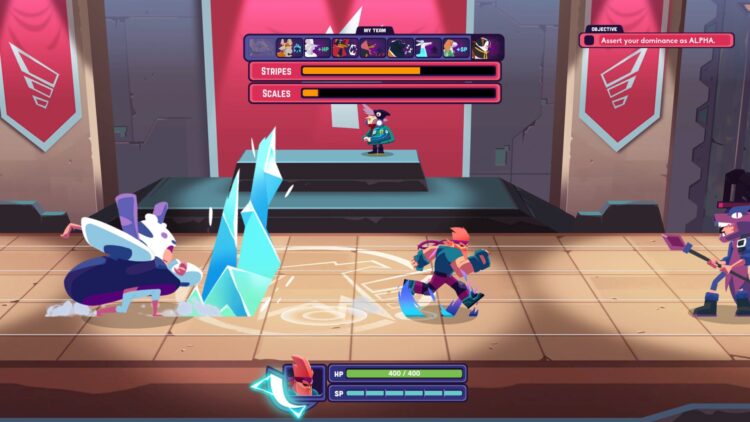 However, you’re so overpowered in The Last Friend that it’s not even funny. I almost never died. In fact, I can count on one hand the number of times my RV even got damaged, which surprised me. The enemies are widely varied and I liked figuring out how to best deal with them, but between my overpowered turrets and my overpowered character, they didn’t stand a chance. Things got tougher toward the end, but it was barely enough to make me break a sweat, even if the amount of stuff going on did make things hectic.

The Last Friend took me about six hours to almost 100% complete. Once you beat the game, you unlock a new dog and can take on a boss rush that you can farm for tons of dog treats, but unfortunately, there’s not any harder mode to move on to. I truly hope the dev adds some kind of tougher difficulty that lets me take my fully-kitted team back through early levels against supercharged foes, as I’d love to jump back in and keep hitting things while building up turrets. This is a highly entertaining game though, due to the combination of great controls, an enjoyable game loop, neat options, and good graphics. I wish it wasn’t so easy, but here’s hoping for that hard mode. 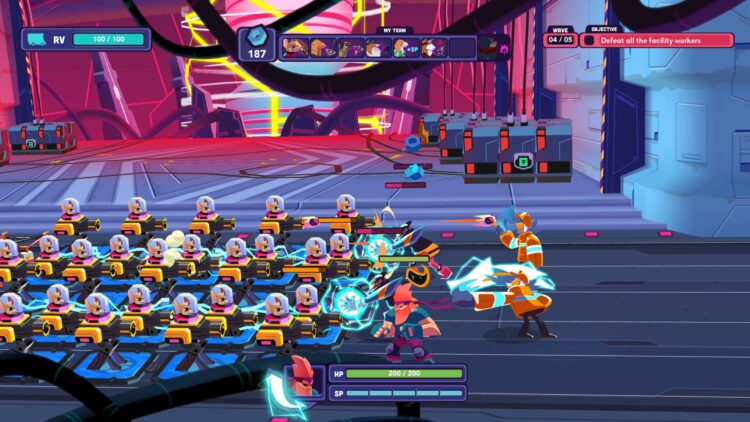 The Last Friend is a hell of a fun time, combining action-packed combat and flashy tower defense into a killer package. It's a bit short and too easy, but these dogs will have their day.

A Juggler’s Tale review — No strings on me