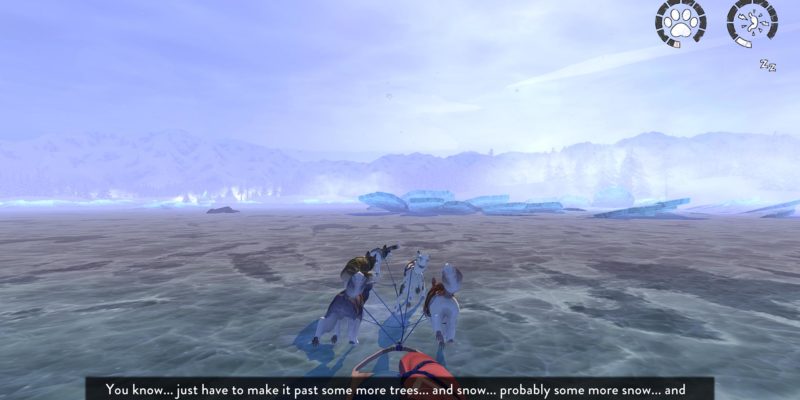 I have to be honest. A rogue-lite about dog-sledding was not something I thought would ever exist. The Red Lantern has some interesting ideas, cute dogs, and endearing visuals, but it’s significantly held back by repetition, too few mechanics, and a complete lack of anything you can call gameplay. It might be worth a look for anyone who’s sold by its premise, but someone looking for an enjoyable rogue-lite will almost certainly walk away unfulfilled, even if the freshness of the game’s central ideas are commendable.

The Red Lantern sees you thrust into the role of a young woman who has decided to move to Alaska and fulfill her dream of leading a dog sledding team. She packs up, makes arrangements, and drives up with her dog Chomper in tow, who she has decided will be at the front of the team. From there, it’s up to you to scope out several adoptable dogs and pick the four you’d like to join you. Each has different strengths, weaknesses, and will have their own events show up. For instance, Barkley will get out in front of danger and maybe fight off a wolf. Another dog is said to follow scents, but has had a lot of run-ins with skunks. Naturally, any time you take him up on an offer to let him sniff something out, it’s a skunk. Great.

Once you’ve got your dogs picked out, you then reach the wilderness where you have to lead the dogs towards a cabin with the titular lantern hanging from it. The main character is voiced by industry stalwart Ashley Burch and her dialogue is both written and delivered with panache. As she’s the only human, she has the tendency of talking to herself all the time. You’ll be hearing the same lines over and over and over again though, which gets old fast. The Red Lantern is billed as a narrative adventure, but not much happens, and the game can get emotionally manipulative. Yes, the dogs can die. Yes, the reasons for this are often totally arbitrary and happen more for shock value than anything else. 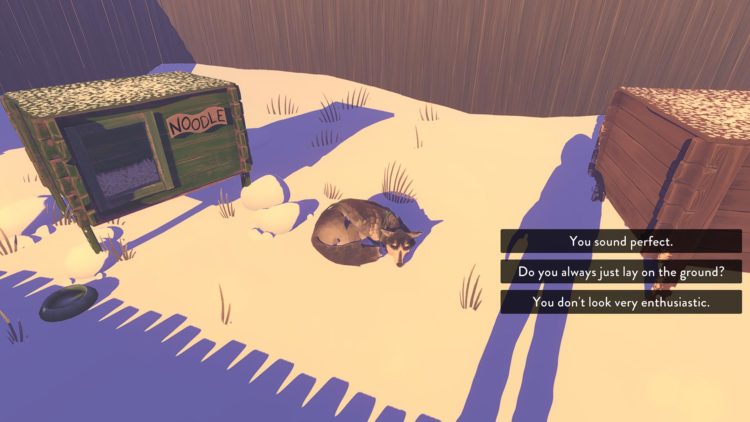 The Red Lantern begins in earnest when you disembark from your car, get the dogs connected to the sled, and then set out in the wilderness to get to the cabin. There isn’t any gameplay, really. You sit back and watch while the dogs pull you. You do get to make decisions though. For instance, you can tell them to go left or right, or when to hunt or search out events. You can move the camera while they’re running, but you don’t control the dogs. The primary danger is that both your character and the dogs can starve, so they’ll all need to eat regularly in order to get to their destination.

The game is, unfortunately, predicated on the fact that the main character is a giant idiot. You see, she has assembled a team of five dogs and has planned to take them out into the wilderness. However, she has brought practically no food, because buying a bag of dog food and some beef jerky was just too hard to remember. She did bring a rifle for hunting purposes, but she only brought a few bullets. Oops. Almost all of the “challenge” in The Red Lantern stems from two things: having enough food for you and the dogs, and dealing with dangerous animals that can kill you.

As you ride through the wilderness, you’ll come across events that you can follow up on. Doing so uses up a peg on the main character’s hunger meter. You’ll mostly be focused on hunting larger game, as they provide more meat. Early on, you’ll also need to worry about finding wood to start fires as, of course, she barely brought any of that either. Why anyone would give so many dogs to this stupid woman is completely beyond me. The fire issue was mitigated for me early on as I found an ax that made cutting wood cost no energy. Although, I never got to use it because I found flint shortly after. That made it so that I never even needed wood start a fire. Any items you find during a run are permanently added to your inventory, as they remind dumb-dumb that she should have packed supplies to begin with. 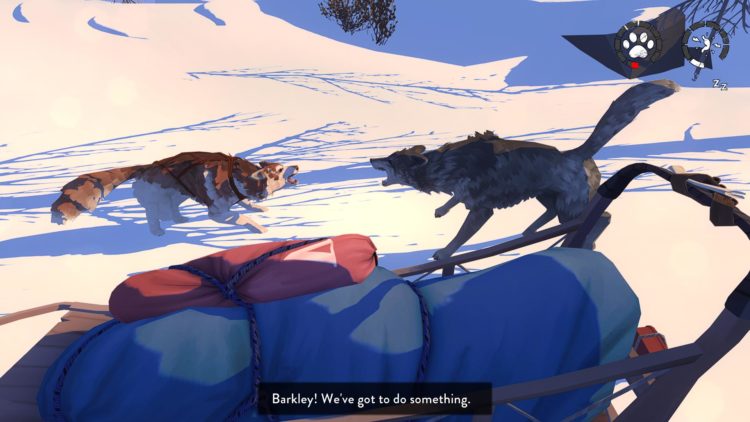 I’m sure you’re wondering how The Red Lantern frames the whole failed run thing. The answer is more idiocy. Every failed run is framed as the main character dreaming the journey. This is even weirder when you realize that the same repeated events happen identically on each run, likely including your final one, which isn’t a dream. Every single one of my runs had us get attacked by a wolf with the exact same sequence, dialogue, and aftermath playing out. I guess the main character is clairvoyant.

There are also certain points in a run where the main character says the exact same things, meaning that it’s easy to get sick of The Red Lantern in a very short amount of time. By my second run, I was already bored. Thankfully, it doesn’t take long to gain passive bonuses that make it really easy to succeed. As you see more events, your character remembers to bring more food and bullets and you’ll accrue more items. When I got the dog shoes that allowed the dogs to get double health from food plus the trap that lets you get two pieces of meat every time you sleep, the game was as good as over.

It didn’t even take me three whole hours to see the ending through in The Red Lantern. And I was sick of the game over an hour before that. I came close to winning earlier, but there’s often an event towards the end where a bear shows up in your path. It can easily ruin runs. Or, there’s the moose that tramples one of your dogs to death. And once again, you’re not doing anything but watching and selecting menu choices while playing the game, outside of the hunting minigame that has you choose when to pull the trigger when two icons line up. Also, any event that takes one of your five dogs out of commission will halve the max energy of the entire dog team. Because, somehow, losing one-fifth of the dog power results in half of their efficiency vanishing. Makes perfect sense. 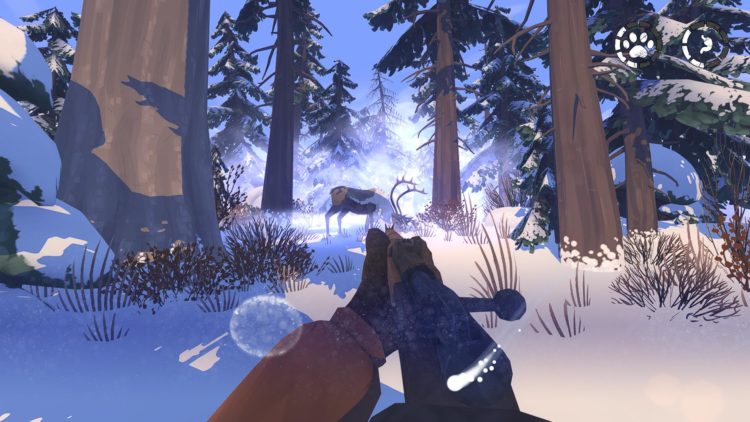 Yes, you can pet the dogs

At least The Red Lantern is nice to look at. The dogs are cute, you can pet them if you’re so inclined, and watching them run on in the snowy wilderness is pretty and relaxing at times. It’s also easy to get invested in what’s happening, as the presentation is put together well. But even at its very short runtime, it’s boring, repetitive, and devoid of gameplay. If it had been a 1.5 hour purely narrative experience, it could have worked, but being a rogue-lite just makes it feel padded and pointless. The $25 USD price tag is also too high for what it offers, meaning that these dogs simply aren’t worth the trip. 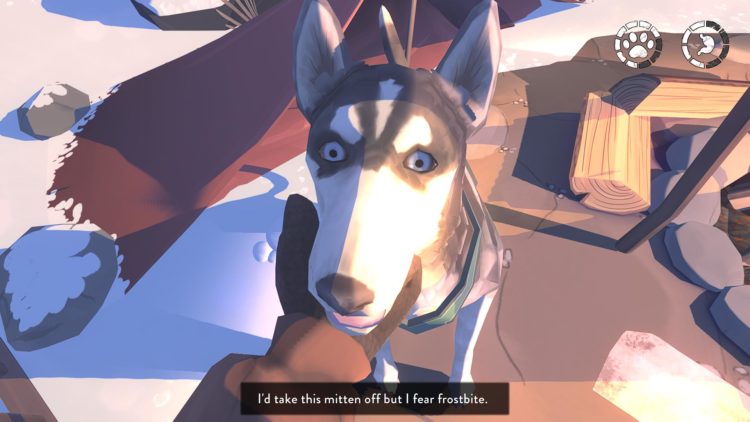 It has the occasional nice moment, but I got sick of it a while before beating it. Furthermore, it can be beaten in under three hours, so that's really saying something.