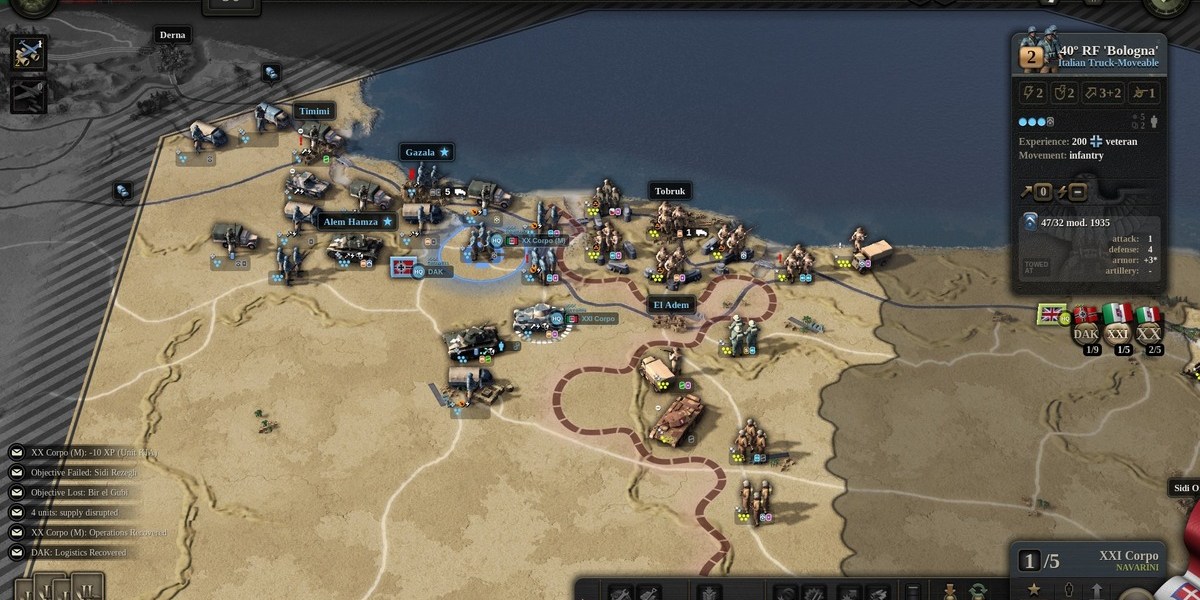 Unity of Command II is a banger of a World War II game. Clean interface, great visuals, an interesting take on how to depict war at a scale where you’re throwing around divisions, it’s got it all. And what’s more, it has been treated to DLC after DLC of new campaigns. The sixth of them is Unity of Command II: Desert Fox DLC, letting us Rommel it up in the desert in the period of 1941 through 1943.

The previous Desert Rats expansion led us down the path of the Commonwealth desert campaigns, striking against the Italians, the Afrika Korps, and the Vichy French. Now, we get to experience those campaigns from the bad guy side, whether it’s marching victoriously to El Amein or retreating ignobly from El Amein (popular place, that).

One of the fun features of Unity of Command II campaigns is the alt-history tracks. This was already present in the main game campaign, allowing us to choose the more aggressive — and harder — series of scenarios in Italy and France. Unity of Command II: Desert Fox DLC has two such alternate tracks. One of them that splits off early on, while the other offers two spots to branch off from the main campaign. If you choose to maintain history un-alt-ered, you, as Rommel, will preside over some of the most daring victories and crushing defeats of the North African campaign. The distances are massive, the supply situation is never good, and the enemy AI has ample opportunities to demonstrate what it can do when it’s not playing in a strictly defensive role.

Your forces will usually come in two varieties: the rare, yet strong German armor and motorized infantry, and the more plentiful but weaker Italian forces. The ideal is often to charge ahead with your strong units, dashing through the desert and hoping that you’ll either be able to supply them via your HQ powers or by capturing enemy supply dumps. Any entrenched enemy is to be first surrounded, cut off from supply, and then given over to the Italians to gradually reduce over time.

On the defensive, Italian infantry quickly becomes the sacrificial speedbump to trip up the AI while the good forces retreat.

History is written by the scenario designers

However, once you turn off the historical track, you even get to play scenarios focused on specifically on Il Duce ad his the fascist failsons trying to reclaim their Abyssinian possessions. As supply issues and vast distances were getting in the way of giving Duke of Aosta a proper kicking in the Desert Rats DLC, so they do in Desert Fox, but now we’re the Italians trying to ahistorically reconquer the land. “The Nazis conquer the Holy Land” is a phrase you desperately don’t want to hear. Screenshot by PC Invasion

In fact, Unity of Command II: Desert Fox continues another trend first glimpsed in the previous DLC: giving you the mirror versions of missions you already played. In Rats, that was managing the British retreat in Greece. Here, it’s reinforcing the French in the Middle East.

Now, some of these missions are made possible by the alternate-historicalness of it all. If you choose to rush for Suez, it gives the Vichy France forces in Levant a fighting chance. Rommel can stiffen its forces with loaned Nazi units, providing a much-needed offensive oomph.

Much like in the previous German DLCs, alt-history tracks are also made more difficult by playing up the greatest hits of the historical campaigns. Hey, you know how Rommel loved to outrun his supplies while taking huge risks? When it comes to invading Iraq, the mission briefing tells you to just rush B heedless of flank security. It’s beautiful, it’s fun, and it goes completely against the usual alt-history grain of depicting the potential outcomes of the new timeline as flawless solutions.

Crush the British with your mind

In summary, Unity of Command II: Desert Fox DLC continues going from strength to strength — another expansion providing a new challenge. Who knows? if the developer is so inclined, maybe we’ll even get to play Operation Dragoon some day.

Unity of Command II: Desert Fox DLC gives the glory and the grime of Western Desert campaign as well as plenty of what-if scenarios.

When will the rest of crafting release in Warhammer 40K: Darktide?