Unsighted is a top-down action RPG set in a futuristic world where humans are, as usual, ruining everything. It promises a heart-warming narrative with engaging fast-paced action combat, and some puzzle-solving elements thrown into the mix too. The basic premise revolves around a meteor that lands on earth and supplies the world with Anima. Anima is an element that allows Automatons (androids) to become conscious. Before Anima, Automatons were soulless robots doing the bidding of humans.

Now, if an Automaton runs out of Anima it becomes Unsighted. An Unsighted Automaton is an aggressive but mindless machine, driven by the sole purpose of gaining more Anima. Naturally, the Automatons want Anima to remain alive and grow their communities; be in control of their own destinies. Typically, humans want to control the source of Anima and uncover ways for it to benefit humanity. That’s the main tension of the story and it’s where your journey begins. 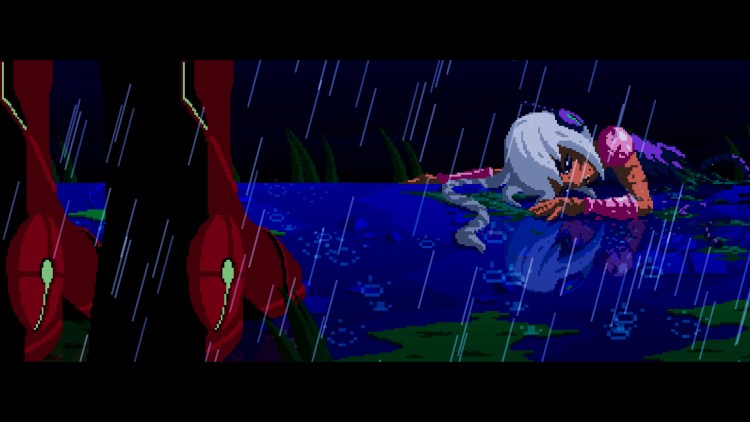 You play as one of the Automatons, Alma. The humans have just attacked your friends and family, and have taken control of the source of Anima. You begin with very few memories of your past. However, you quickly encounter other Automatons who remember you and care for you. They fill you in on what has transpired and explain that you’re the best Automaton fighter ever. You’re the only chance they have to reclaim the meteor, get more Anima, and continue living their lives.

Every Automaton you meet in-game has a finite amount of time before they become Unsighted. That includes you. Meteor Dust can be found in chests hidden around the city of Arcadia, where the game is set, and be used to extend anyone’s life by 24 hours. However, time is always ticking away and the only way to stop it is to reclaim the meteor.

The feeling of running out of time is intense in Unsighted. It does an excellent job of making you feel responsible for the fate of the Automatons, and it certainly drives the narrative along. You feel the pressure to succeed and save everyone. It’s a heavy burden. 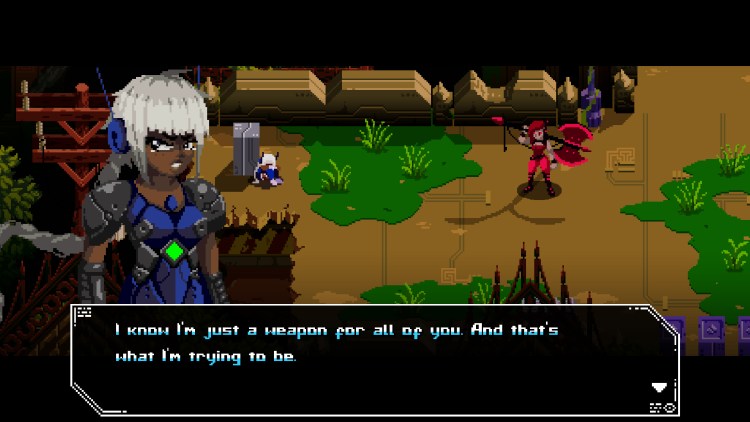 The flip side is that you need to make every minute count. Sometimes I didn’t feel like playing the game because I didn’t want the pressure of progressing weighing on me. Also, Arcadia is vast. There are lots of side routes to wander down and explore. But instead of enjoying exploring, I constantly felt like I was wasting time.

I can’t tell you what happens when you run out of time in Unsighted. I wasn’t brave enough to face my own death. But, if you need more time, you can always sacrifice another Automaton to extend your life. I needed to do this once and I felt terrible about it.

Before the humans attacked, five meteor shards were given to five powerful Automatons around Arcadia. It is decided that the best way to fight the humans, and their monstrous creations, is to gather these shards to craft a powerful blade. That’s your first major goal. 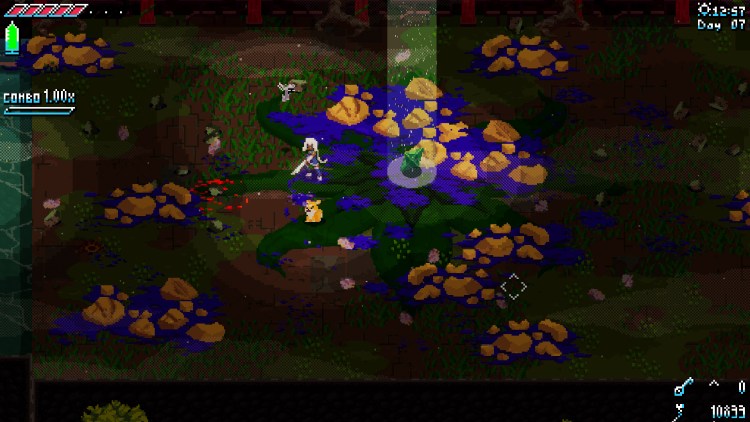 Unsighted makes a fundamental mistake early on by telling you that you can acquire the meteor shards in any order. You cannot. You need specific tools, like the ice grenade or spinning top, to be able to clear obstacles and traverse certain parts of the map. I wasted so much time exploring a section I ultimately couldn’t get through because of this. And as I mentioned, you’re constantly running out of time. This annoyed me and it took me a while to get over. It could have ruined the entire game.

Before getting onto a whole load of things that are very good about Unsighted, I just need to mention that it’s very easy to get lost if you take a break at the wrong time. A few more key markers on the map would have helped me return to the path I was on and would have prevented me from wasting a lot of time. I nearly gave up on the game entirely after I spent almost an hour trying to retrace my steps and work out where to go. There’s also a side quest where you save dogs. They were cute at first. But I wasted many in-game hours on this and became frustrated by the questline.

Having said that, I’m very glad I didn’t give up on Unsighted. The action combat is engaging and fast-paced. The difficulty ramps up quickly, but that makes every victory all the more rewarding. Your blade, of which you have many customization options, feels crunchy and impactful when you slash into an enemy. Parrying an enemy melee attack or projectile feels terrific too. And, if you’re panicking a little (like I did), you can always opt to dodge out of the way.

Since you’re an Automaton, you can empower your character by installing different chips. These can make your melee attacks do more damage, grant you additional projectiles, reduce damage, increase stamina, make your power attacks charge faster, and so many more options. I thoroughly enjoyed this simple yet rewarding character-building system. I was pleasantly surprised by how effective changing my build proved when I was struggling with a boss fight. 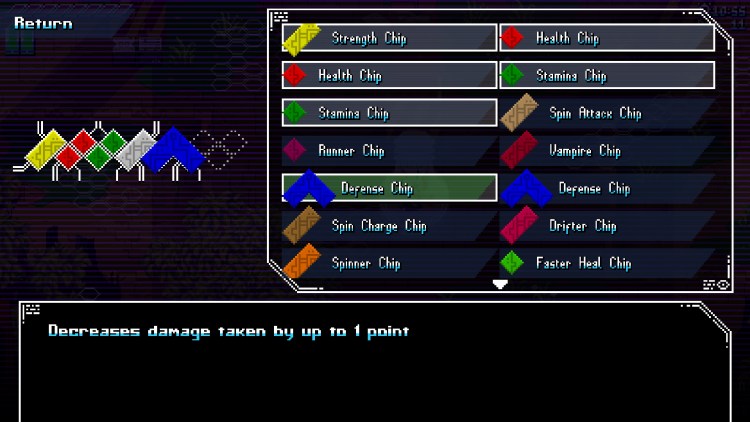 I love the pixel art of Unsighted and the scenes are beautifully styled. The perspectives were sometimes a little off, but you get used to it quickly enough. Each area of the city has a bespoke look and feel associated with the powerful Automaton living there. There are also unique mechanics in each of these areas that help refresh the puzzles. Just make sure you do them in the right order, as they are labeled from one to five.

Unsighted’s gameplay and visuals are solid wins, but the narrative is also endearing. I was worried that the story wouldn’t feel rewarding enough. But, it delivered some poignant moments near the end that tied everything up nicely and left me feeling warm and fuzzy inside.

Learning to be human from a robot

You are trying to save all the Automatons, but your focus is a specific one that is missing at the beginning of the game. Alma clearly has feelings for the missing Automaton, but she doesn’t express them. That’s probably because love is a concept that she doesn’t understand yet. The flashbacks where two Automatons are developing their connection are impactful, because of all the things the two of them don’t know how to express. 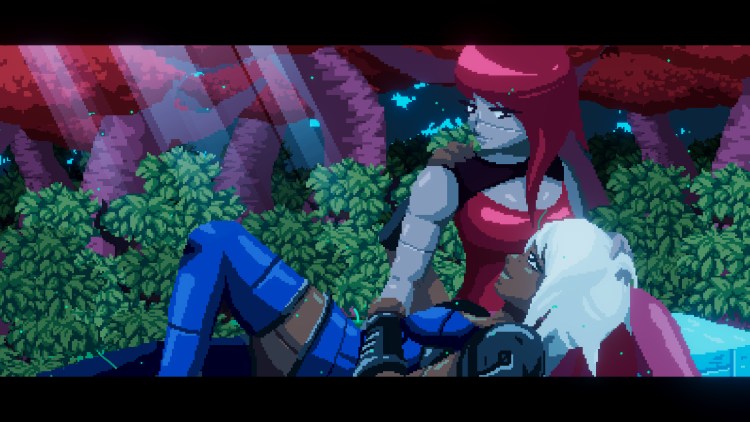 During the journey, Alma grapples with desires that pull her in opposite directions, and I struggled along with her. Because you don’t know how long the game is going to take, you don’t want to give up your meteor dust for other characters, when you may need it for yourself. Your sense of self-preservation is constantly at odds with your desire to keep everyone alive.

When the main supporting character, an Automaton fairy named Iris, dropped to less than 24 hours left, I finally started giving out meteor dust. I used just enough to keep her and Alma alive as I picked up the pace and rushed towards my goal. Eventually, I sacrificed a lesser character to give Alma more time. That allowed me to give more meteor dust to Iris to keep her going.

In the end, the main campaign will take you about six to seven hours to finish. While I may have been frustrated at times, particularly when lost, I didn’t regret any of my time spent with Unsighted. 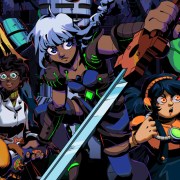 Unsighted delivers engaging top-down action combat and a heartwarming narrative about connection, sacrifice, and love. The gameplay is fast and victory tastes sweet. Not everyone will enjoy the journey's burdens, and getting lost can frustrate you immensely, but the destination is worth the journey.