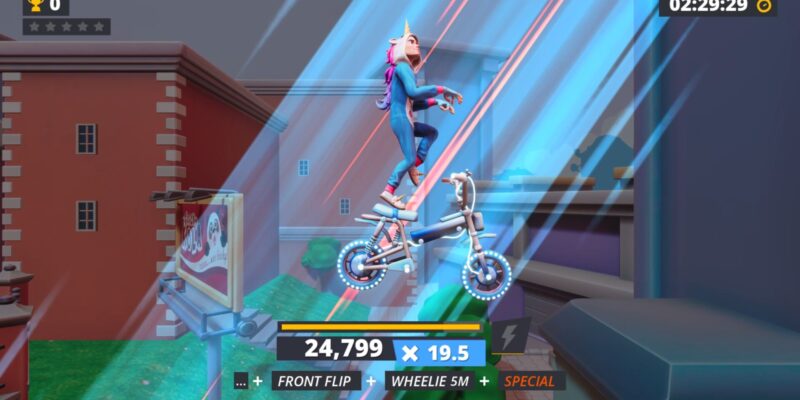 Dammit. Those who’ve known me for a long time know that in real life I splice the word into conversation like some would use a comma. In my home, the word was also synonymous with Ubisoft’s Trials series, because my bellows of it could be heard echoing in every corner the moment I started playing. The newly christened Urban Trial Tricky looks to once again scratch that obscenity-inducing itch.

We might as well address the elephant in the room before we get too far out of the chute: the Urban Trial trilogy of games (yes, it’s actually a trilogy — I checked) is essentially a limited subset of Trials’ features, with the serial numbers filed off. Yet, for whatever reason, this installment focuses more on the flair than the checkered flag. In the big picture, this isn’t necessarily a bad thing by any stretch of the imagination. That said, it can be hard to somewhat put on blinders to features available in their direct competition. Consider this my best attempt to review Urban Trial Tricky without referring to Ubisoft’s brand from this point forward. God help my soul…

Believe it or not, but the Urban Trial series of games have been available on steam since 2013. If you’re like me, you’d find that level of longevity impressive from a legitimate “B Movie” version of a popular franchise. Yet at this point, the Urban Trial brand seems keen to dig out its niche in the more acrobatic and eccentric aspects of the genre. Ultimately, this proves to be a very smart way to help the games stand out in a crowd.

Urban Trial Tricky is to motorbikes what the Tony Hawk franchise did for the skateboard. The object can be used in an innumerable number of ways, but this time around the game’s focused on flashiness and an almost arcade vibe. Sure, there are a handful of the more traditional racing-centric stages, but they are few and far between, not to mention far from the center of attention. I would almost go as far as calling them an afterthought in the bigger picture. Ultimately, the core gameplay revolved around testing the limits of your timing, not to mention patience. 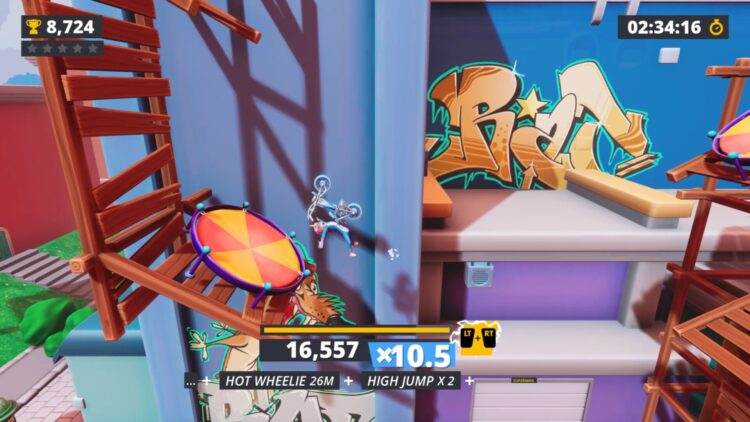 Thanks to the unskippable tutorial stages early on, it becomes extremely apparent that you’ll need to become proficient at more than just traversing left to right to succeed. At least the game makes a point to tear that band-aid off early on, managing your expectations as a player. While this is a bit of an adjustment from the normal formula, I was all about giving this new bent the benefit of the doubt. Then I learned about the special move controls and instantly started experiencing second thoughts.

Every special move is tied to where the bike is at any given time. If it’s in the air, there are a certain collection of activities that can be performed, initiated using a series of unique button combinations. The same can be said for when the vehicle is either in a wheelie, stoppie, or stationary position as well. Unfortunately, except for the tricks performed aerially, the remaining trio of positions feel unnatural and awkward to try and pull off. Granted, this might improve slightly over time, but I’ve actually cleared every stage and still feel weird trying to complete a majority of the moves consistently.

As you progress through the campaign, additional moves and combos are unlocked. As a result, up to three buttons would need to be successfully chained together with the proper cadence to accomplish the desired special. Initially, all you might need to do is hold a single button to launch into a super, but eventually you’ll need to get the hang of these longer combos. Luckily, in the only stage type requiring such combo work, the button sequences are shown as visual prompts. If they hadn’t been visible, I’d have been more boned than the Roman Catacombs. 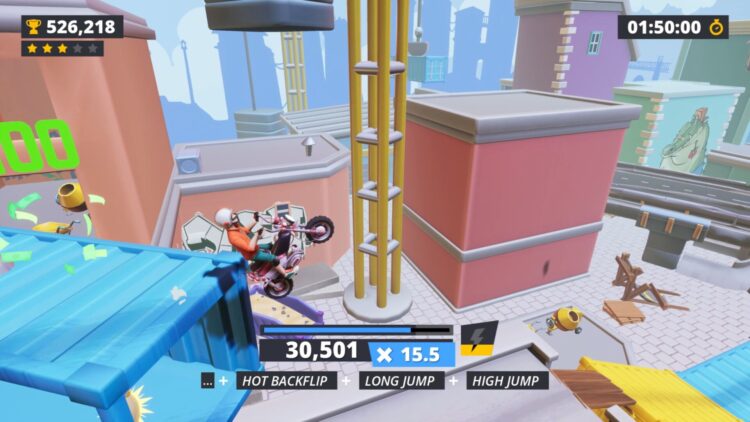 As I alluded to earlier, presentation is the focus and, in that respect, it does well for the series. Urban Trial Tricky runs beautifully in 4K at a blistering 60 fps. The more trick/skill-centric camera feels drawn in on the rider, making the character the focal point of the action. In retrospect, the increased dependency on trick missions makes total sense. Plus, it would be crucial to pad out the runtime.

Limiting your view of the periphery looks to be for several reasons on the design front. First off, if your attention is drawn in on the character it means that you will likely be able to see less of the environment and, in turn, focus more on your specials and combos. Honestly, stages are packed tighter than a can of sardines. Virtually all of the map layouts are more fixated on verticality than distance, given the shifted emphasis. For this same reason, it also seemed that most races were far shorter than you’d traditionally expect. 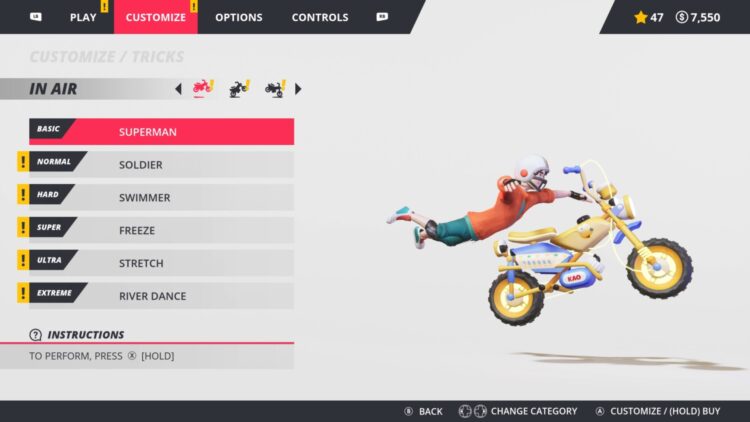 Repurposing the same handful of tracks across numerous missions must’ve been a boon for the development team. I mean, why not use the same locations to perform trick runs, mimicking challenges, and additional tutorials? Stages are laid out in a fashion where you almost need to platform your way over to the optimal sites to truly cement a solid run. Missions are sequenced in a way that forces you to understand the entire stage’s layout before you’d come around to the actual racing objective. This helped move the races along tremendously, yet I was only able to top the dev team thresholds once.

Personally speaking, I’m of the mindset that if you feature tutorials as deep into the campaign as Urban Trial Tricky, you’ve probably not explained and/or implemented your mechanics effectively enough. Cruel as that may sound, the last couple rounds of trick tutorials could just as easily be duplicated and it would’ve accomplished the exact same thing and prevented the gameplay interruption.

The highest “dammit per minute” ratio has to go to the trick runs. These missions would give you a running timer, with the challenge of driving up the combos and multipliers high enough to pull in tremendously inflated scores. All it takes is one ill-advised or improperly performed landing (or even worse yet, a botched move) to get that multiplier completed nullified. I can’t even count the number of times that I had a score that would’ve landed me somewhere in the stratosphere, only to have it jacked up by my own greed. Dammit, indeed. 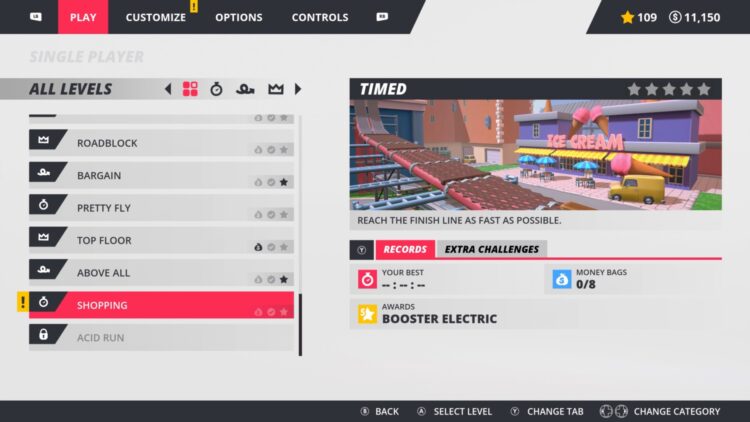 In one last passing shot, it’s hard to avoid discussing the campaign’s runtime. I was able to beat the entire campaign in a single sitting. Granted, that was a rather extended session, but it was still underwhelming as far as the amount and quality of content was concerned. A vast majority of the stages felt cobbled together and remarkably unremarkable — they were just there. And don’t even get me started on the lack of multiplayer outside of leaderboards. Talk about missing a key opportunity to make up ground on the competition!

I did enjoy my time with Urban Trial Tricky, but it was more a masochistic kind of way, rather than one of legitimate joy. The game attempted to burrow down on a deeply underappreciated aspect of the genre and give it some time in the limelight. Instead, all it managed to reinforce was the reason why it had been an afterthought in the past. Unless you are really jonesing for another hit of that sweet motorcycle madness, it’s probably best to just leave this beast in the starting blocks.

If you're looking for a proper Trials-like experience, look elsewhere. The focus on tricks and combos takes some getting used to, and is likely not even targeted at the same audience. This is a ride that will end far too abruptly, and lacks a majority of the variety associated with the genre.