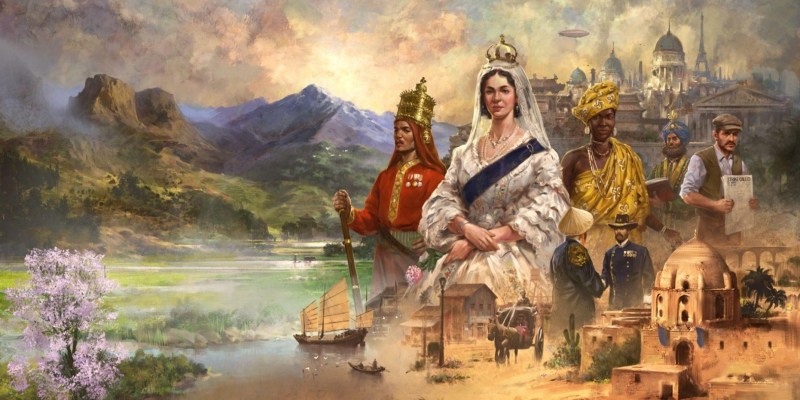 Victoria 3 is launching soon. As one of Paradox Interactive’s grand strategy franchises, it can truly be a daunting task to learn everything from scratch. And, to be fair, I did have a lot of qualms before I decided to dive right into it.

Partly, it’s because the Victoria or “Vicky” series has never been my forte. Although I’ve put in countless hours into Crusader Kings, Europa Universalis, Hearts of Iron, and Stellaris, the Vicky games never really captured my interest. As such, I’m someone who’s already familiar with Paradox’s works, but I’m approaching this latest offering with fresh eyes.

Let’s get started with Sweden

There were two reasons why the Victoria series never truly hooked me: the time period and themes/gameplay focus. The time period — 1836 to the early 20th century — was the heyday of European hegemonies, from the Scramble for Africa and slavery to imperialistic dominance and the Industrial Revolution. As for the themes, in Crusader Kings, I could at least role-play as a ruler who takes care of their dynasty. In Europa Universalis and Hearts of Iron, respectively, I could attempt to colonize my homeland, the Philippines, as Spain, or defend it against the Japanese.

Each franchise has a tighter focus on what it wants you to do and delve into. Victoria 3, meanwhile, is primarily about trade and managing the economy, which are the functions/mechanics I tend to automate or neglect in other titles.

Still, I gave it a shot, starting with the tutorial as Sweden. Already, I could see quality-of-life improvements from some recent Paradox games, such as tooltips that would appear as you mouse over other panels. Sadly, things went downhill from there. There were specific tasks that I could tackle, but too many things were going on at the same time that I found some tidbits hard to grasp. Worse, each task led to multiple tooltips, panels, tabs, and icons, that I nearly had a migraine at the torrent of information. Again, even with familiarity when it comes to other titles from the same developer, I still felt confused and discouraged.

I almost felt like giving up, until I decided to watch some tutorial videos and read developer diaries. Slowly, I understood some of these factors, though there were a lot of blanks that needed to be filled. I spent time checking balance sheets and graphs, which became downright tedious. I had to wonder why: “If X is in-demand, and it has a green revenue icon, that should be good, right?” Then, I had to ask myself later on why: “If Y was in-demand, and then this trade route stopped being profitable a month later, does that mean too many of those goods over-saturated the market, was my production inefficient, did my convoys disappear, or did I no longer have a trade route, to begin with?” 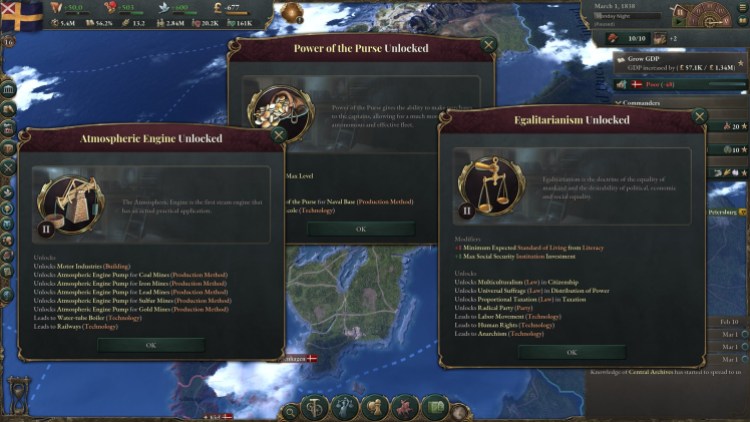 Eventually, I decided to play as Brazil. At the beginning of the campaign, the nation is engaged in the Ragamuffin War and another conflict against Grão Pará. Warfare is, perhaps, one of the strangest changes I’ve seen in the game. If other titles had you selecting multiple units and advancing them one by one to capture provinces, then Victoria 3 is relies primarily on automation and streamlining.

It involves assigning a general to a front, whereupon he’ll command your army regulars from various barracks, as well as any conscripts you raise. That general will then advance (or defend), and battles will take place automatically. This can be a welcome change, if only because warfare in other Paradox games devolved into extensive micromanagement and Whac-A-Mole.

Unfortunately, it also turns into a strange case of waiting and twiddling your thumbs until the conflict is over. I would’ve wanted a system where you can toggle what gets automated/streamlined and what’s set for full manual control — i.e., let me fight the battles on my own and let the AI handle trading, or vice versa. Then again, that goes against the design concept for this game. 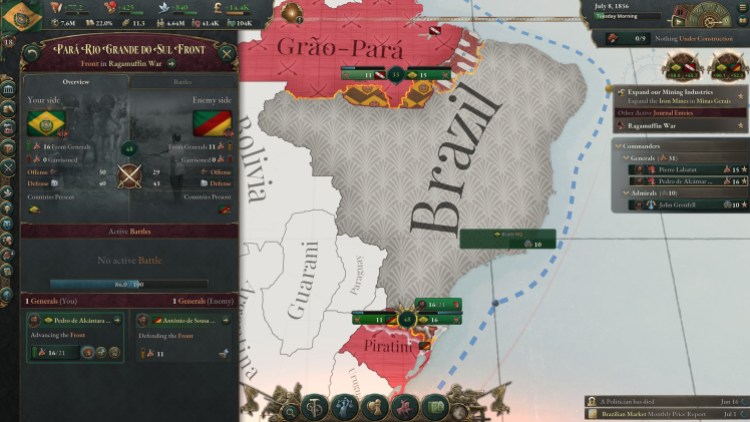 One factor that did catch my eye in Victoria 3 was the Diplomatic Plays mechanic. Assuming you have an interest in a region, you can enact a Diplomatic Play, such as conquering a state, puppeteering a nation, cutting a larger empire down to size, and so on. Every country within that region, as well as those with an interest, can engage in that act.

There’s a period, prior to the breakout of hostilities, where you select war goals (which surprised me since I can’t seem to find a way to cancel a war goal to regain spent maneuver points), and sway others to your side. In effect, even the smallest conflict in a far-flung portion of the world could lead into a massive all-out brawl that involves the Great Powers.

Another concept that intrigued me was the use of various interest groups that have a say in how your run the country. If possible, you can reform your government, bringing different groups, such as the church, landowners, intelligentsia, industrialists, and armed forces into the fold. Of course, each sector of the populace has its own priorities and ideals, so any action, or inaction, can affect your government’s legitimacy and the loyalty/radicalism of these people. 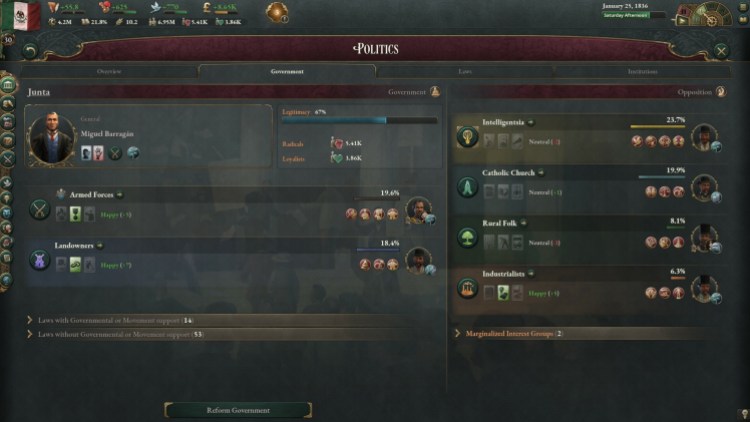 The glory of the Philippines

Of course, I had to play as the Philippines, too. Or, rather, I selected the Philippines, then I switched to Spain to grant independence to my homeland. That gave the Philippines thousands of cash to spare, and even a bunch of regular army troops. In quick succession, I managed to conquer the neighboring states of the Sulu Sultanate and Borneo, while gobbling up the Malay Peninsula. Soon, my people reigned in Southeast Asia, which also earned the ire of the European Powers due to accruing a ton of infamy.

I did win a few major wars, but only because AI Austria happily got swayed to my side to fight off the North German Confederation. That was followed up by France coming to my aid to take on Great Britain. It was strange to watch the Great Powers annihilate each other, all while I sat cozy after taking over a small province in modern-day Indonesia.

What’s the strange part, you ask? The fact that they kept on fighting and losing countless troops, and I still couldn’t offer a peace deal. The warscore wasn’t lowered extensively, and my economy was being bled dry even though I’ve already captured my main war goal. 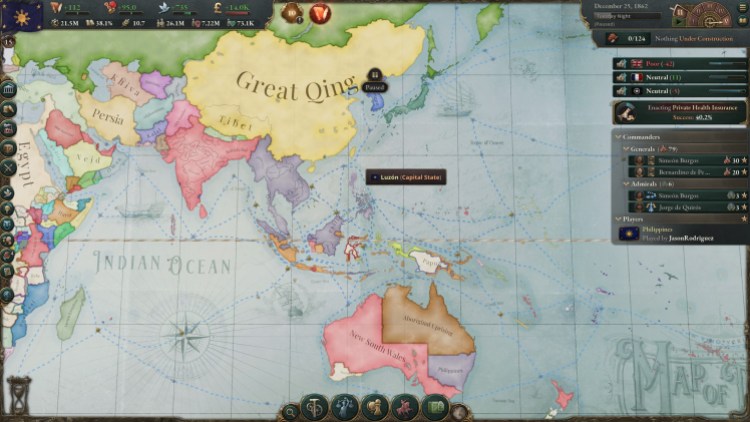 On a positive note, Victoria 3 is downright gorgeous, with one of the most visually pleasing maps I’ve ever seen. Zoom out, you can see the color-coded countries of the world. Zoom in, and you’ll notice your individual provinces growing. From peasant workers in farms to the advent of industrialization, you’ll get a glimpse of the progress being made by each state. Everything is magnificent to behold, as you see the fruits of your labor, and the results of the decisions you’ve made for your chosen country.

However, other questions remained unanswered. For example, why are buildings all over my lands being constructed in a series (i.e., one at a time) instead of per province? Why is the AI joining a rival’s side even though we both have numerous trade routes that were mutually beneficial?  How come there are provinces that won’t allow Diplomatic Plays, even though I have an interest in the region/I already have lands under my dominion therein?

In the end, I do think that if I approached Victoria 3 as a nation-building or political management game, as opposed to the usual focus on trade or the weird automation of warfare, then it’s possible to see that it has the right ingredients to keep me playing for hours. Unfortunately, it took a while before it finally hooked me, and it was only in short bursts before I started wondering what the heck was going on. It’s decent for what it is, and perhaps others will enjoy it, too. But, in my case, I’d go back to what I’ve come to learn and love from the other grand strategy franchises. 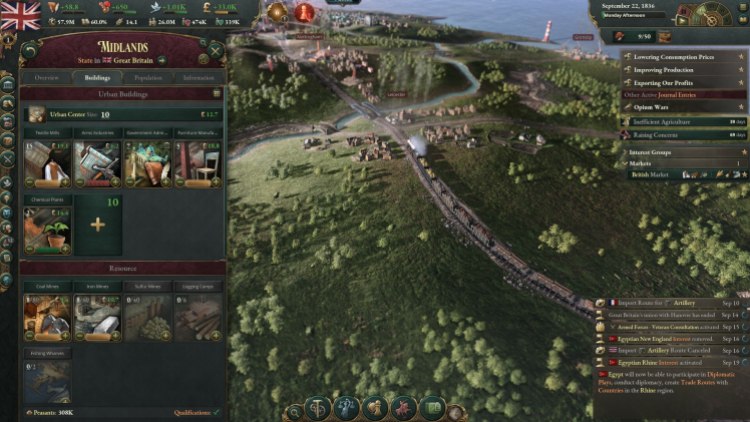 Paradox Interactive's grand strategy game with a focus on economic management and trade.
6.5

Victoria 3 is, without a doubt, grand in scale and scope, and it's downright gorgeous, too. Sadly, the countless mechanics mean that there are too many moving parts, which lead to more questions than answers. The automation and streamlining of battle is, likewise, a baffling change. Even as a veteran of Paradox Interactive's games, this is still one series that I can't get behind.