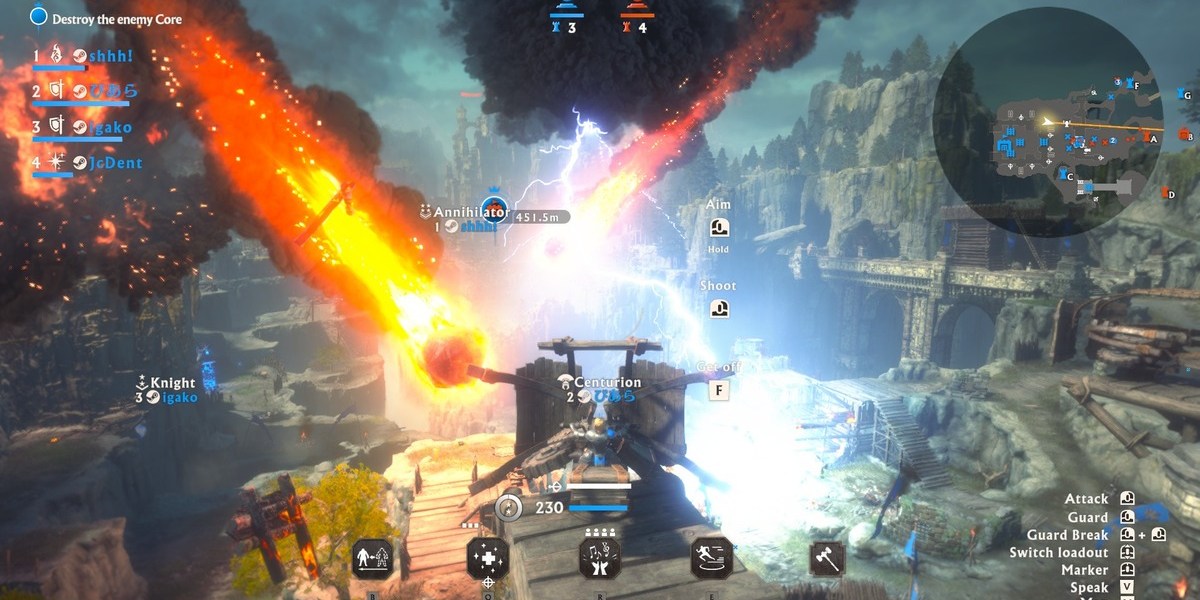 Sure, Mordhau and Chivalry 2 might be cool games, but what about people not interested in careful control of the blade? What if some folks just want medieval-ish siege-like combat that also features wizards? Then the prayers of those have gone answered, as Warlander is your free-to-play, third-person mass slasher-and-magicker.

Like with the other greats of the genre, two very arbitrary sides exist in the game. I assume the blue guys are good and the orange guys are bad. Outside of the colors, they’re both identical, down to how the troops look. But despite the many brotherly commonalities, all the soldiers of one faction want is to destroy the castle core of the other faction while preserving their own. This may involve capturing some towers along the way to facilitate sending more reinforcements to the front.

I too remember the Onslaught mode of Unreal Tournament 2004, and can safely say that Warlander suffers for not having a Redeemer pick-up. Having said that, I can now collapse into a pile of dust to be swept away by the gales of time.

So, in Warlander, you can play as a Warrior, a Cleric, or as a Mage. They are, respectively, melee tanks focusing on single target damage, support melee characters that provide healing and some other utility spells, and glass cannons focusing on range and AoEs.

That’s not to say that Warriors and Clerics don’t have ranged weapons in addition to their sword/hammer-and-board. It’s just they’re not very satisfying to use, what with those being low-damage, full-auto crossbows. They also do less-than-nothing against giant tornadoes. Screenshot by PC Invasion

Now, if “full-auto crossbows” didn’t clue you in, Warlander is a somewhat silly game. Historical realism has no place here. The warrior is your fantasy-standard soldier in plate armor who still bears a sword and a shield. Clerics are all waifish ladies who don’t step out into the field without their plated high-heel shoes. Your mages are not only dressed in robes and large hats, but their magic arrow is a full-auto spell unleashed by going finger guns akimbo.

It also has a reliance on speed and skill even compared to Chivalry 2. Warriors and Clerics live and die on switching between attack and defense (the shield blocks everything) and, crucially, not letting anyone get behind them. Mages need to know when to best use their powers and how to stay away from the fight, because they’ll die if they get into melee range. Your finger guns don’t do much in melee. Screenshot by PC Invasion

You need to juggle your two weapon sets, as they also hold half of your available powers each. You also need to know which powers are useful. For example, in the current state of Warlander, a Warrior without Powerbomb — the wrestling move where you grab the enemy and crash them down on their head — is playing with one arm tied behind his back. It’s such a great move for neutralizing other Warriors and staggering them for a few hits afterwards that you may forget that it almost one-hit kills low-level Clerics and Wizards.

Even if you liked combat that is decided more by power than mere skill in the blade, quite a few powers are underpowered or fiddly to use. Powerbomb is the king of Warrior arsenal and only a rebalance of the game can change that. But there are things that need more technological fixing. For example, quite a few spells don’t just go off when you press they key on the keyboard. No, you have to set the target – very annoying for heals – and only then can you approve or cancel the casting.

Ah, yes, levels. They have to do with the weird way you set up your characters for the fight in Warlander. For when you go into battle, you don’t take a single character. You take your deck of five, and you can switch out when spawning or teleporting around. The mixture is up to you: you can have two Warriors, two Clerics, and a Mage; three Mages and two Warriors, just a single Warrior; and so on.

There’s a reason to diversify. First of all, any loot items that drop are singular. If you equipped the new ‘Longsword Of Incremental Betterness’ on Warrior 1, you can’t give it to Warrior 2. And, on a real technical sense, you can specialize by giving different gear with varying boosts. I have not checked if Magic Agent Orange is in the game. Screenshot by PC Invasion

But even the characters aren’t all the same. Each of them collects their own XP, and as they go up levels they can unlock titles, which are like (very meager) subclasses. More importantly, higher titles allow you to equip more gear. Say a starter Warrior has a capacity of 240 and a Longsword takes up 60. There’s only so much of the (lowest tier, very boring) gear you can pile on him.

Want more capacity? Level up that specific Warrior until he gets to Squire, bestow the title on him, and then he’ll be able to wear less pathetic pauldrons! Except that there’s one issue: you won’t be able to spawn him at the start of the match. To do that, you have to reach the requisite amount of Valor points, aka score. You don’t lose score for spawning titled characters, but unlike les paysans, he’ll have have a cooldown for respawn.

What this means in practice is that more skilled players will get to their better characters faster than you do, but killing them will also set them back — at least temporarily. And you get Valor points for everything, from blocking with your shield, to resurrecting players and building siege engines. 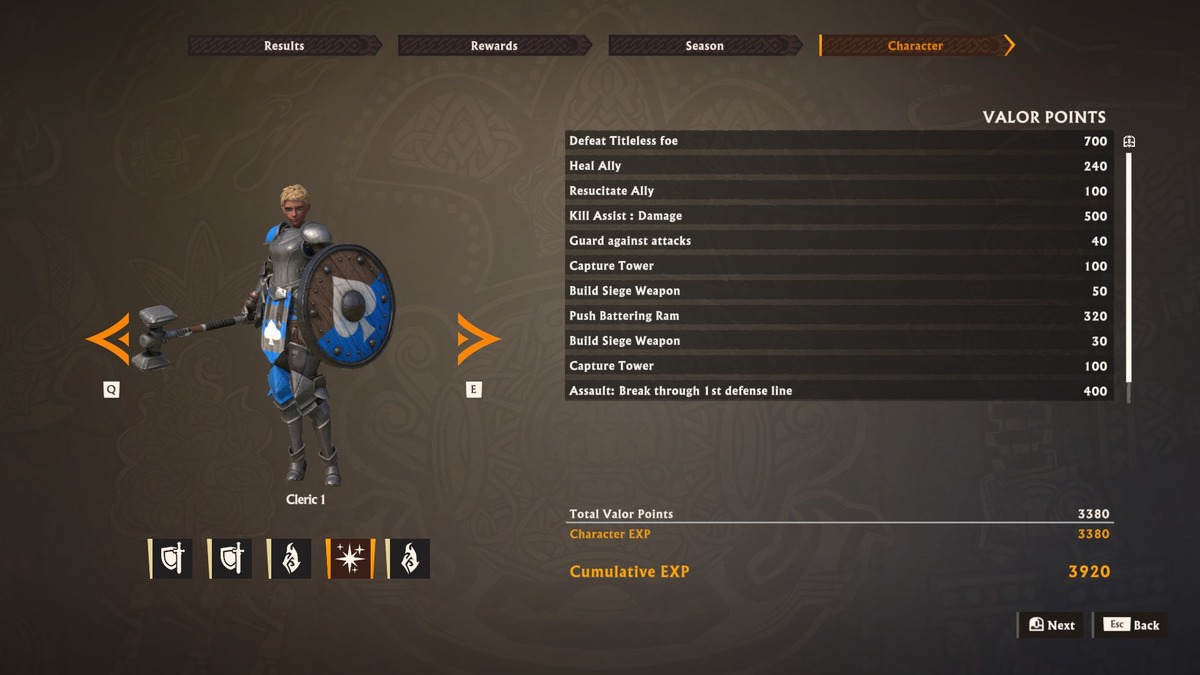 Oh, the siege engines. Your castle is surrounded by walls, walls with destructible gates and constructible guns. On the attack, you can build (and rebuild) rams and siege towers… and summon a robot that seats five? Sure. All of these wouldn’t be too much to write home about, but your build efficiency depends on keeping your reticle on the middle of the build circle while your character hammers away. It’s a small change, but it adds some fun and skill into something that, in most games, would be just an exercise in holding a button to fill a bar. 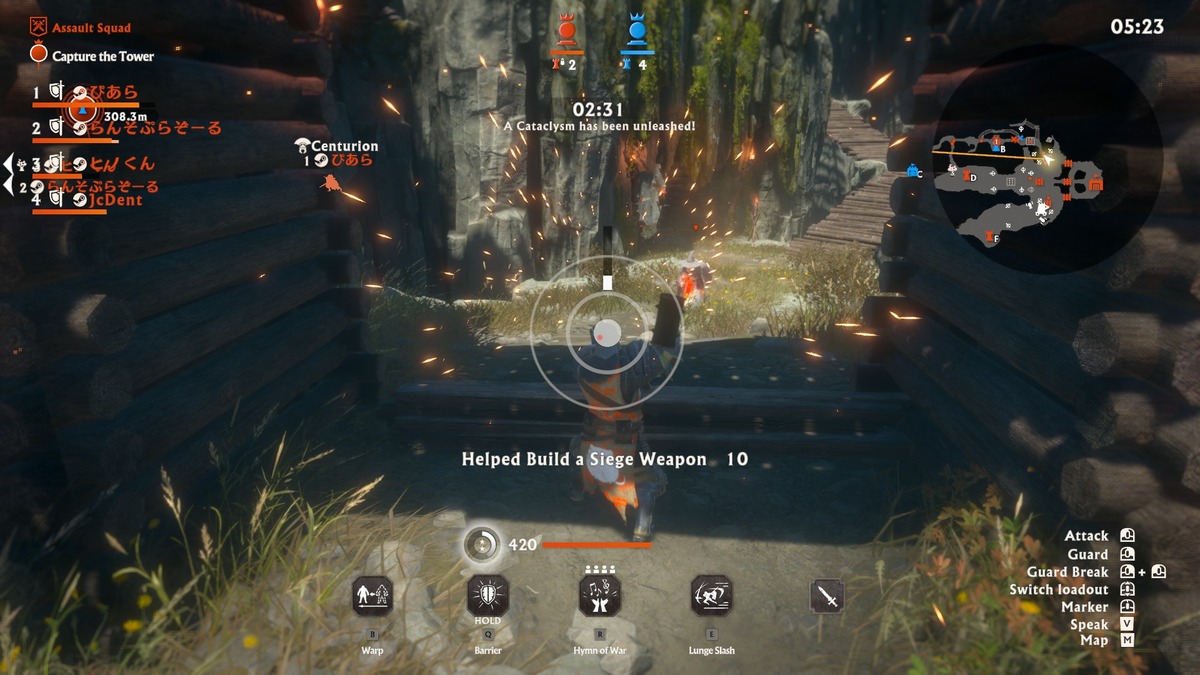 Hammering some planks into a gate with alacrity. Screenshot by PC Invasion

Ah, but it’s not the only place where Warlander awards precision. If, while attacking enemies in melee, you stagger them, you’ll see a white heart shape briefly appear. Those who have the presence of mind to see the heart and the discipline to hit it will do a devastating combo. An even rarer occurrence is for a melee character to execute a finisher on a badly wounded enemy for more Valor points. It’s usually faster and easier to just cut them down in the melee.

Speaking of point-like things: currencies! Warlander has two. Silvers are used to buy new gear and fiddle with your existing stuff. It’s the regular currency you gain after battles, when recycling items, and so on. There’s also gold, the premium currency used to buy cosmetics, all sorts of earning boosts, and season passes. So there’s no outright pay to win, but considering that people buying passes and potions for gold will have to grind a lot less… it get a little more muddy. 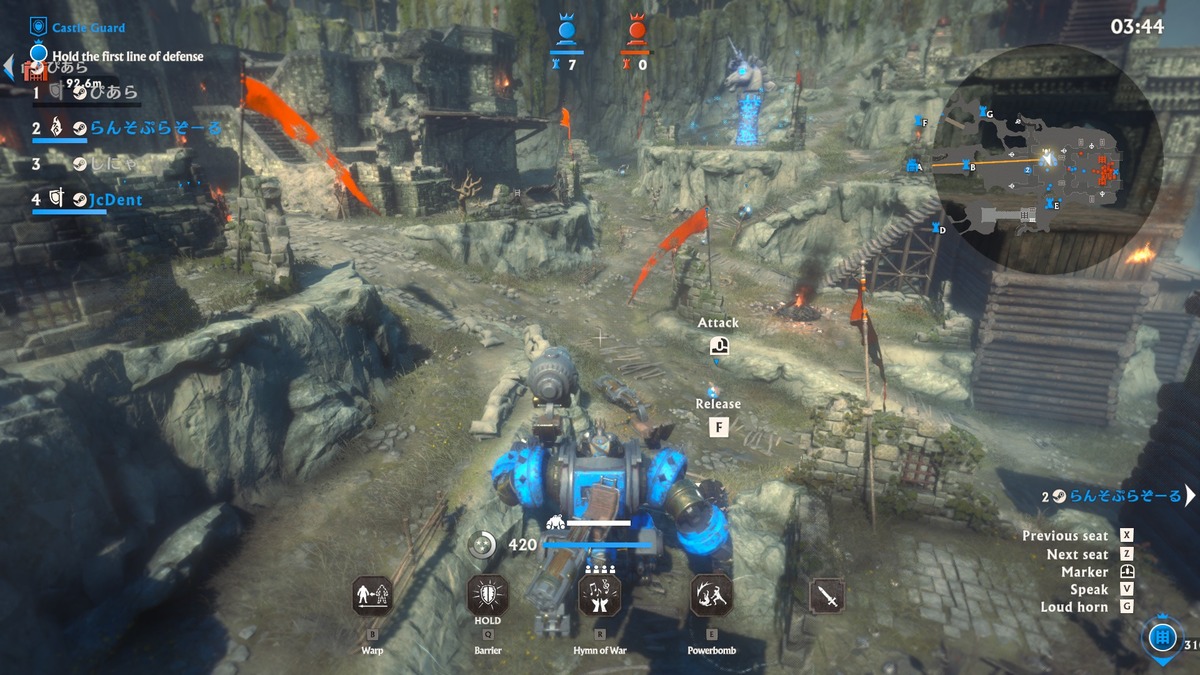 Only a Japanese game designer is brave enough to put a giant robot into a fantasy game. Screenshot by PC Invasion

On the other hand, Warlander isn’t a looker, and that is probably a bigger issue to me than the gameplay. The designs are okay, but not really impressive. They’d be serviceable if not for textures and accompanying audio. In general, Warlander doesn’t look, sound — and, in the case of all the full-auto crossbows and other silly ranged weapons — or feel powerful/impactful. Recoilless high-ROF weapons dealing chip damage never felt good in any game.

One very weird choice is character customization. You have very limited control over armor color, and even when you do, only very little gets affected by it. So your character will look gray and drab, even if you apply glamours that change the shape and material of your gear. You can change the design of your tabard, but it will take the color of your team. You can choose a single (not fantasy appropriate, like sports numbers or Pusheen) symbol for your crest, but it simply remains white and is placed way too low on the tabard. It’s all a little bizarre. 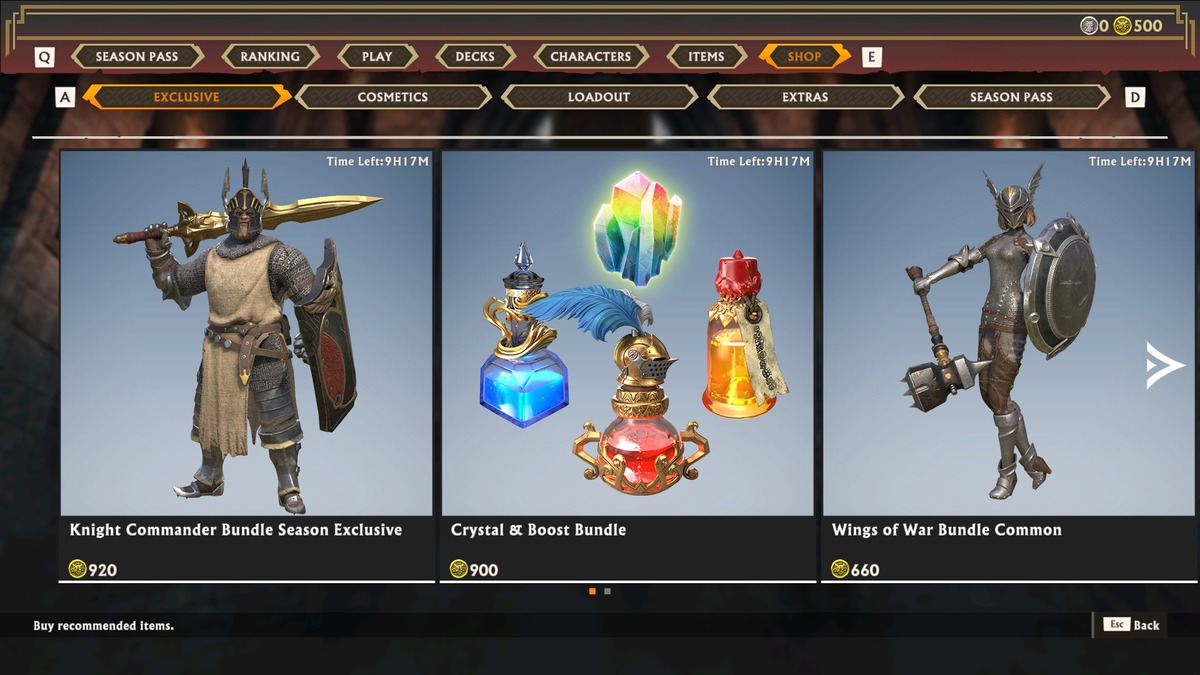 Even premium currency can’t make all the gray go away. Screenshot by PC Invasion

All in all, I’m not impressed with Warlander. Sure, it has some interesting ideas to it, but the gameplay either isn’t that great or is absolutely not for me. Even with my lack agility and dexterity, I had a much better time eating dirt in Chivalry 2, and it was a more visually impressive, aurally pleasing experience. I just wish more games of that caliber had the guts to let me ride in a giant robot.

Warlander will cost you nothing to try out and see if its high-paced arcade-y combat overcomes the the tedious visuals and audio.

By Kurt Perry23 hours ago
Reviews