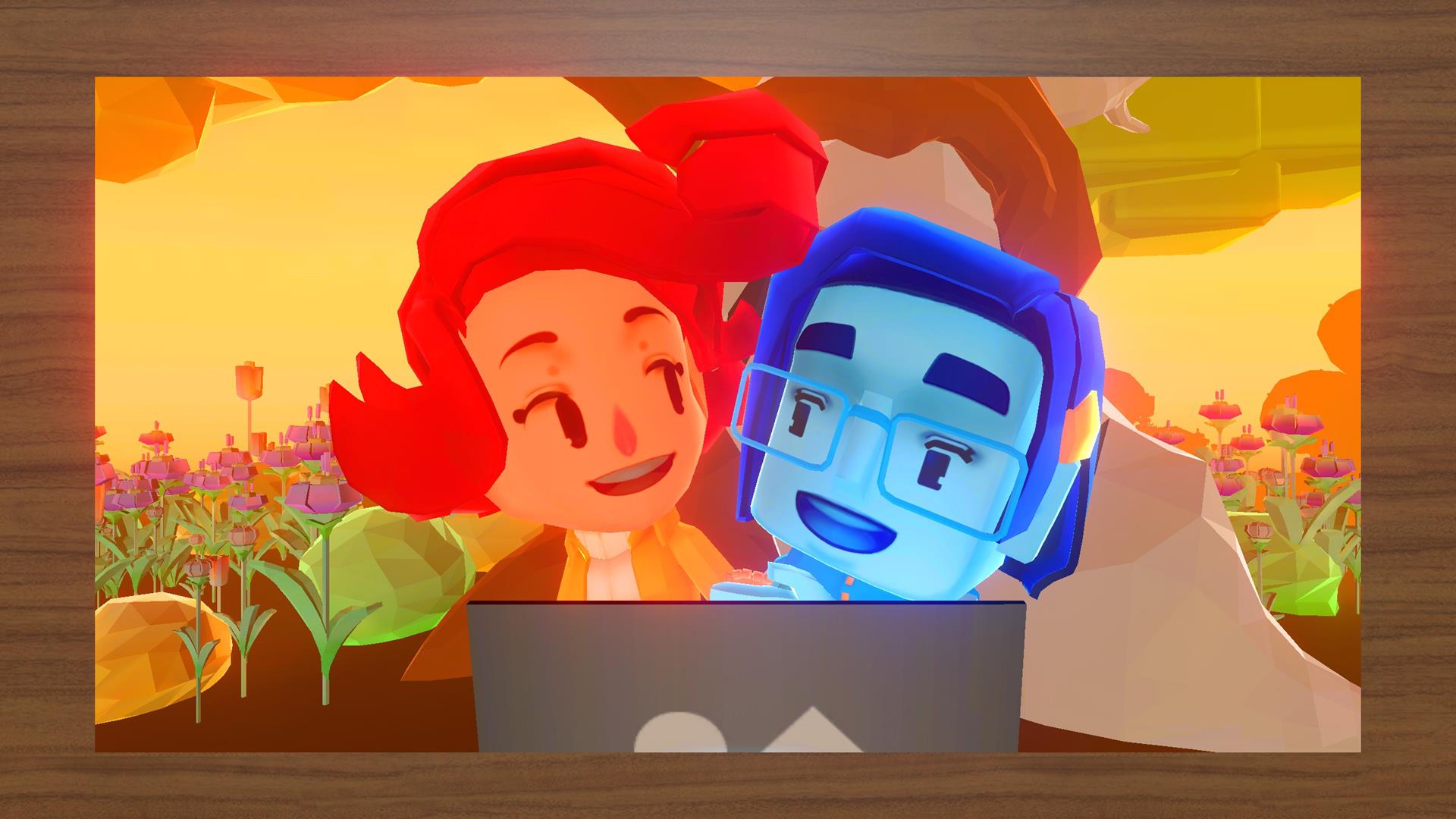 For better or worse, A Fold Apart – with its focus on long-distance relationships — has arrived at a very appropriate time. We’re in the middle of a period in which communicating via technology has become more important than ever before. Plenty of people, including those who actually live near their significant others, now have to communicate this way for safety. 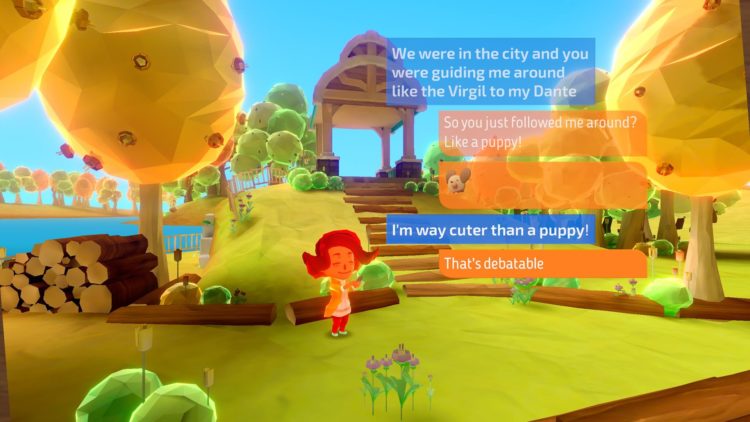 The text message exchanges are pure and delightful.

The latter reason for a long-distance relationship is the crux of A Fold Apart‘s simple tale. We join two characters, the Architect and the Teacher, in a loving partnership. The Architect is given the job offer of a lifetime, but it’ll mean his (or her, as the genders of both characters are up to you) moving away for a year. A Fold Apart‘s clever 3D puzzles are framed by the strains and troubles caused by this temporary parting.

The two communicate solely via text message across the year, and players are treated to – and can alter – these messages. But this isn’t the gameplay. When one of them reads something that they interpret negatively, they’re spun into a sort of mental spiral that you need to help them physically traverse.

You do this by, as the name implies, folding. Every puzzle in the game is effectively a sheet of paper: It can be flipped and folded over to create a path to the goal. The simplest sort of puzzle might have a gap between the character and the goal on the front and a platform on the back. A little bit of folding and unfolding, and you can get the character to the exit.

Out of left fold 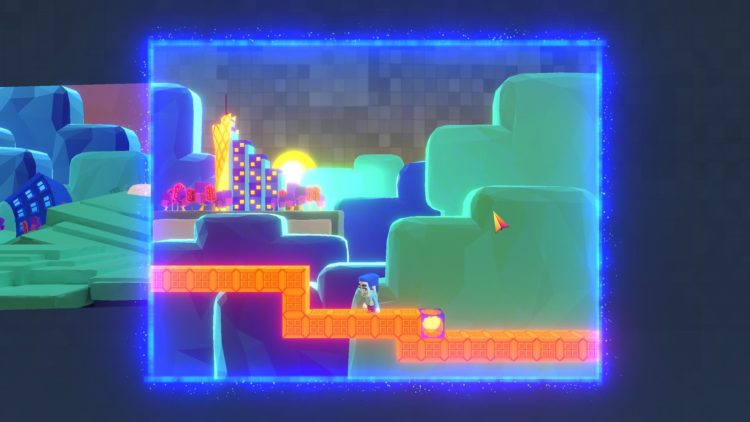 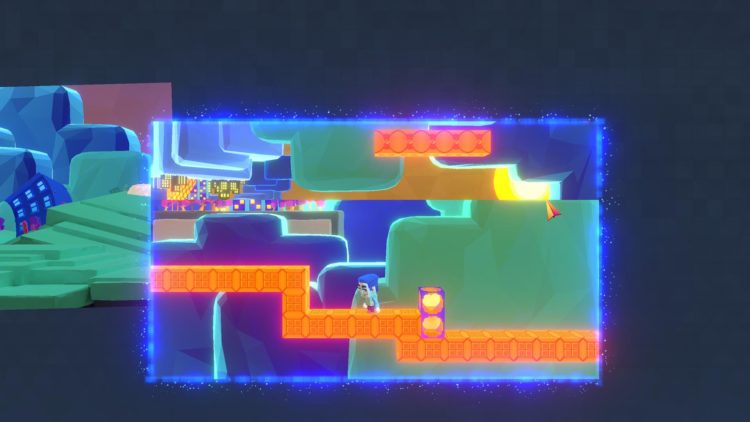 These two screens show one of the simpler puzzles: moving a block on the bottom to act as a platform, folding the top of the paper so a second block (on the reverse) drops down, and then being able to pull that along and use it to climb higher.

Things get vastly more cunning and complicated later. Each of the game’s six chapters introduces new mechanics like folding at the corners or rotating the paper. Pushable blocks might need to be moved around to create platforms your lovelorn characters can climb onto. It requires a pretty good grasp of what I can only really describe as 2D space with a 3D element: Everything is flat, but there’s a reverse side you’re also manipulating.

If that sounds mind-bending… well, it is. Some of the later puzzles in A Fold Apart are total bastards, but they rarely feel unfair. The game also has an excellent hint system that restarts the level and, at your prompting, makes moves one by one. If you get stumped, you can use this to effectively skip one step in the puzzle rather than risking spoiling the whole thing, or even just see if you’ve made the right moves so far. And you can take direct control at any point of this progressive hint system to continue on from anywhere you like.

One mild downside is that the paper-folding mechanics occasionally glitch out, but I’ve never actually seen this happen with an essential move. Every time it’s happened, it’s been a move that was unnecessary; in that sense, these bugs were almost like a second (if unintentional) hint system. And those aside, the technical aspects of A Fold Apart are pretty much flawless. 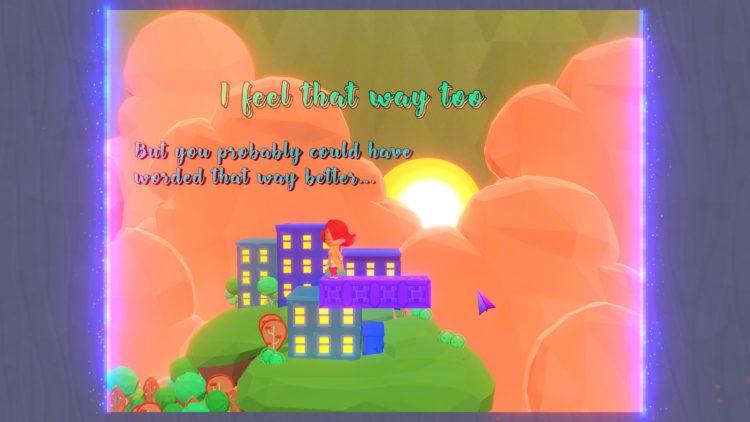 While the puzzles are devious, they’re never unclear. The sparkly edges denote sides that can be folded.

The aesthetics of the game, both visual and audible, are equally superb. Gentle piano underscores the entire game. The happier moments and triumphs have uplifting music; when things go wrong or the characters are unhappy or worried, things get a little bit slower and more discordant. It’s never anything but tender, some crashing sound effects aside, but it does a good job of softly calling attention to the emotion – positive or negative – in any given scene.

The papercraft characters and world are gorgeous and unique, and while it’s hard to show in stills, each piece of paper is like a little window into a 3D world. The “flat” paper can be folded and rotated but the world within is 3D, and the movement of the camera adjusts what you can see within. It’s simple but breathtaking.

In terms of gameplay, I only have two real complaints, and both have caveats. The first is that A Fold Apart is short. Really short. If you’re pretty bad with puzzles and refuse to use the hint system at all, I could see it maybe lasting four hours as an edge case, but for most players (and me), I suspect it’ll be between two and three. The caveat here, of course, is that every one of the game’s puzzles is a cleverly designed vignette, and A Fold Apart doesn’t overstay its welcome. Nonetheless, this is probably the single biggest push against buying A Fold Apart right now: It will not take you long, at all. 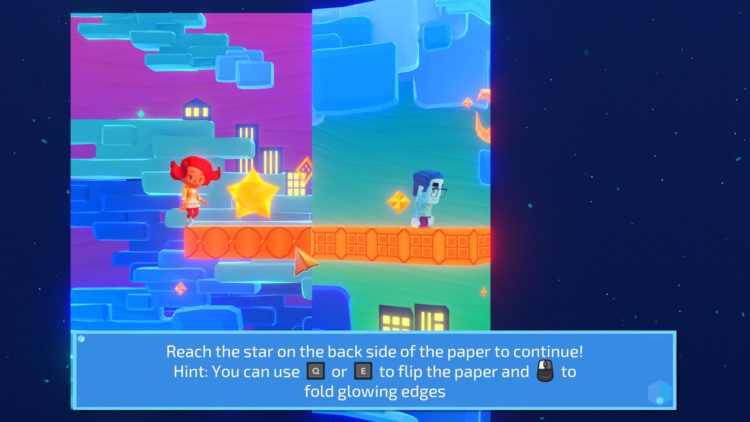 It’s hard to display in pictures, but the folding effects – with the back of the paper and the images on it warping as it bends – are stunning.

The other issue is that the movement is a little ponderous and slow. A multiple-second animation to climb a single block adds up if you’re restarting a puzzle over and over again due to trial and error. But despite this being a negative for the game mechanics, it’s again something positive for the experience. The Architect and the Teacher aren’t athletes, and this is a slow and languorous game. Faster animations would absolutely change the atmosphere.

And the atmosphere is key to A Fold Apart. I’ve tried my best not to get into personal details in this, but to some extent I have to because it’s One Of Those Games. 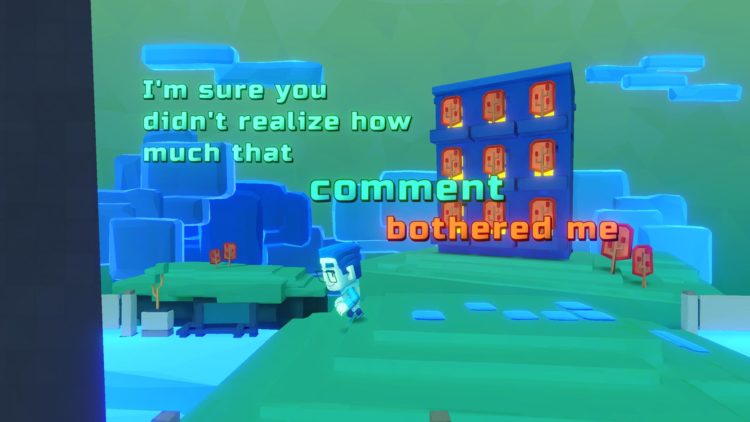 This is basically “I’m Sure You Didn’t Realize How Much That Comment Bothered Me: The Game.”

As someone who’s had a number of long-distance relationships, it brings up a lot of memories, most of them bittersweet at best. A Fold Apart does a heartbreakingly good job of pointing out the insecurities that can fester in these relationships. Simply put: it’s so, so easy to read too far into the simplest sentences. A Fold Apart highlights this with stark and painful clarity, and anyone who’s ever been in a relationship like this will be able to relate.

To anyone who hasn’t been in this sort of situation (or even taken a text message the wrong way) some of the overreactions might seem silly. But at a distance, largely communicating through text, it can be so hard to tell what’s going on in another person’s life, let alone in their head. You unconsciously analyze and over-analyze things. A simple thing like, “I dreamed you were here. It was so nice,” can be easily misinterpreted as an unhappy dig at the person for not being there. And that’s without getting into sending a few caring messages, getting no response, and then finally receiving the dreaded and aloof “Out with friends, talk tomorrow.” 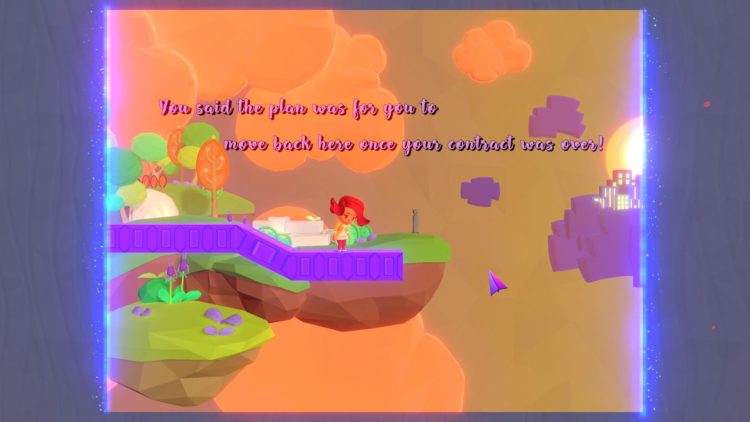 If you want to know how much this impacted me, scrolling back through the screenshots I took made me wince.

There are issues it doesn’t touch on – fear of infidelity being the biggest – and I’m kinda glad for that. The Architect and the Teacher are secure in their love. But the distance is a giant hurdle that’s driving a wedge between them, which starts off minor but quickly grows to the point where it may seem insurmountable.

If you can relate to this stuff, then beware: A Fold Apart will bring up memories. It will probably hurt. It reminded me of a lot of past experiences, stupid thoughts and decisions, and old regrets. But it can also give you a new perspective on these things, and maybe even a bit of hope. It’s beautiful and harsh in equal measure, in every way: its visuals, its puzzle design, and its overarching story. A Fold Apart is a very special little thing which is likely to leave a sizeable impact on the right sort of person, and that’s worthy of acclaim. It’s poignant, sharp, hopeful, painful, and it’s aimed squarely at our times. And our hearts.

A Fold Apart is short and pricey, for sure, but the few hours it offers are an arresting blend of devious puzzling and heart-rending storytelling. Infinitely more so if you've been in a long-distance relationship.