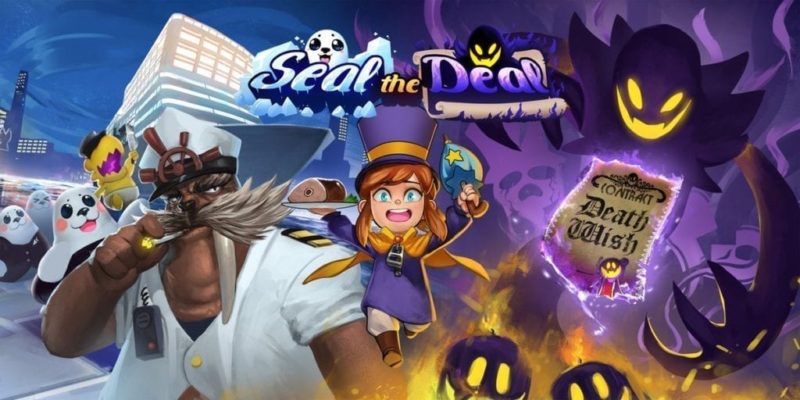 A Hat in Time is a great little throwback to the GameCube’s era of platforming goodness. Released about a year ago, the title garnered a fair amount of goodwill. The developers are now seeing fit to add a little more content to this package. And for the first 24 hours, it’s free!

Seal the Deal is the first major update for A Hat in Time and it’s adding a sizeable amount of content. An entire level is being added with its own storyline line and Time Pieces. Taking place within a cruise liner, The Arctic Cruise has you bounding past runaway dinner carts and platforming off of chandeliers. There are also a ton of cute seals everywhere.

They get the seal of approval

The DLC also includes a new mode called Death Wish being added. Essentially, this takes levels and bosses that you’ve already conquered and ratchets up the difficulty. Now levels have more hazards for you to avoid and bosses attack even more relentlessly. There are also Death Wish challenges, which task you with not only with completing the levels but to accomplish additional objectives that put you right in harm’s way. This DLC should satisfy any players who thought A Hat in Time was a bit too easy.

There are also six new Time Rifts to platform your way past. Multiple cosmetic outfits and flairs are being sprinkled throughout the game. There is even a local co-op mode that is being added to A Hat in Time as a free update, separate from the Seal the Deal content.

The Steam page states that The Arctic Cruise requires 35 Time Pieces to access. Also, Death Wish requires 27 Time Pieces. From the sounds of it, the difficulty of this new content is mainly for veterans of A Hat in Time anyway, so it shouldn’t be too much of a problem.

Hop into A Hat in Time soon and grab this DLC. After it’s 24-hour free spree, the content will grow a $5 price tag.