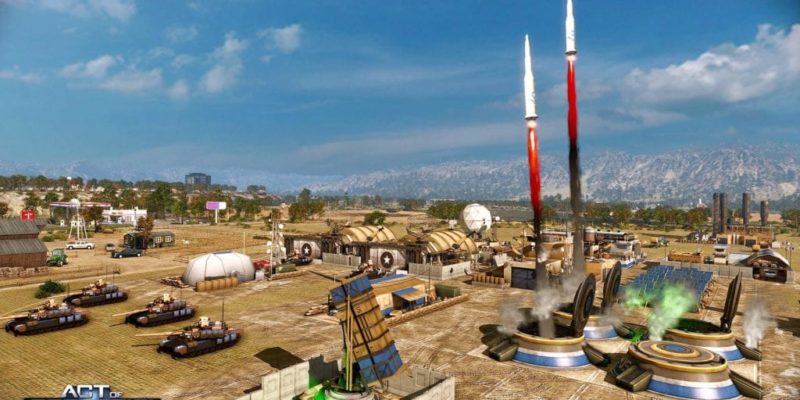 Eugen Systems have released some cracking strategy games in the past few years, including RUSE and the Wargame series, all of which have offered more wargame-y twists on the typical PC RTS formula. Now they’re back with an all-new RTS entry called Act of Aggression – a game that’s a lot more like a traditional RTS, but still brings some surprises of its own.

The base building, upgrading, and resource gathering elements of the RTS genre may not be features all RTS fans enjoy, but there’s a large community out there who are hankering for more of that style of gameplay. Sorry, but capturing a point and hoisting a little flag is somewhat less satisfying than picking away at the enemy before ultimately wiping them out.

With EA having completely ruined the Command & Conquer franchise, there’s been a gap in the market for a modern warfare style RTS and that’s exactly what Act of Aggression is trying to be. Three factions that are all different, all battling for supremacy, and all fighting over resources. It’s a tried and tested formula and when done right it can be incredibly satisfying. 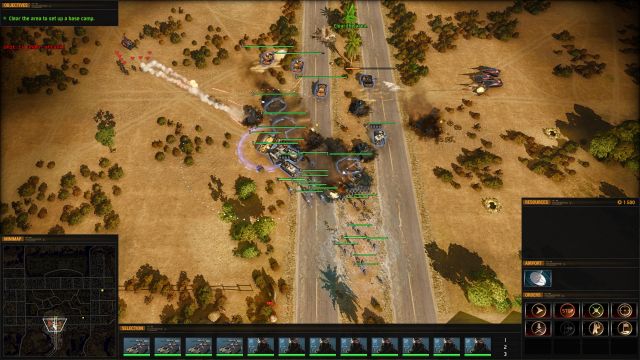 Act of Aggression has been in Early Access for some time now and players have been able to test the game’s multiplayer, first with the US and Chimera forces, and then – more recently – the technologically advanced Cartel. Playing the game this way before playing the solo campaign has been interesting, but it’s probably not the way I would prefer to tackle an RTS for a couple of reasons.

One of the joys of playing a new RTS is learning the units through mission progression, but having extensively played the multiplayer you know exactly what everything does, making it difficult to figure out if the single-player campaign missions are well-paced.  What it has highlighted is that the single-player unit unlocking progression is slightly different to that of the multiplayer, because Eugen has carefully tuned the solo missions to make them challenging.

Most RTS single-player campaigns are straightforward: start off easy with some basic units and then progress up the tech tree from there. Act of Aggression is slightly different and it’s not a simple task to get a handle on exactly what’s going on with the campaign. There are two campaigns in the menu, the Chimera and the Cartel, but no US Army. The US come into play during the missions within these campaigns as the plot unfolds.

The plot is odd and it’s not easy to follow but essentially it’s the UNO Chimera task force and US versus the advanced Cartel. There are plenty of code words such as Eclipse, Zeus, Thor and a few other mythical gods, but the whole thing is not presented particularly well. Taking a leaf out of the C&C book, the voice acting is super cheesy and frankly terrible in places – and not in a Joe “Kane” Cucan good way, either. The script is so bad that at times you have to re-read the dialogue at the bottom of the screen because it sometimes makes no sense. 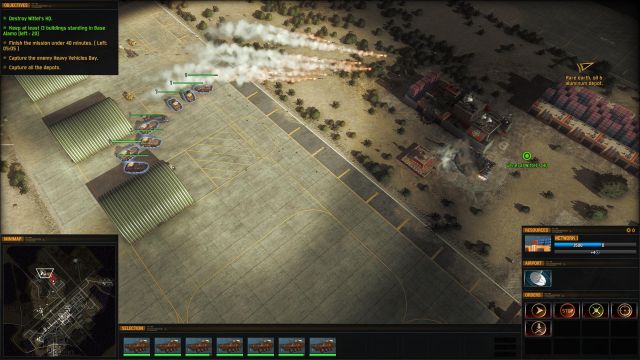 But I’m not going to dwell on the story or script because I will only confuse myself, and honestly, it doesn’t really matter much because the story isn’t the strong point of Act of Aggression. It’s all about the gameplay and the challenges in the solo campaign.

What Eugen has done is challenge the player by placing them in solo mission scenarios which require the player to think outside the box. This is done by limiting units, unlocking tech at specific points in a mission, or limiting or changing the way in which resources can be gathered.

A good example of this is demonstrated in a particular mission where, as the US forces, you need to take out multiple enemy bases… but there are no resource nodes. Instead, all resources have to be collected from depots and then transported back to base. The problem is you need to capture those depots first, and each one is guarded by different unit types. This means that you can’t capture every depot in the same way: you need to use anti-air units to take one, while another calls for anti-tank weapons. With limited resources available for building heavier units, it takes some careful chopper-flying and troop-dropping to achieve your goal.

This is a typical example of how Eugen have made the solo campaign engaging, and there are times when it’s easier to restart a mission than persevere once you have a better understanding of what’s involved. Each mission usually features multiple objectives; some are required, while others are bonuses such as keep X amount of units alive or finish a specific part of a mission in a specific timeframe. I’ll admit that Eugen had me a little stumped a couple of times which doesn’t happen often when I’m playing an RTS.

A really neat feature in Act of Aggression is the POW mechanic, where other player’s men can be captured once they are injured. These prisoners can be transferred to prisons to auto-generate cash, or automatically traded for bulk resources at a time of your choosing. Initially this looks like a gimmick, but the more you play, the more it becomes apparent that prisoners play an important part in the economy and can boost your funds significantly. This mechanic also means that you don’t have to completely rely on resource collection from refineries should a game have progressed beyond the early stages. 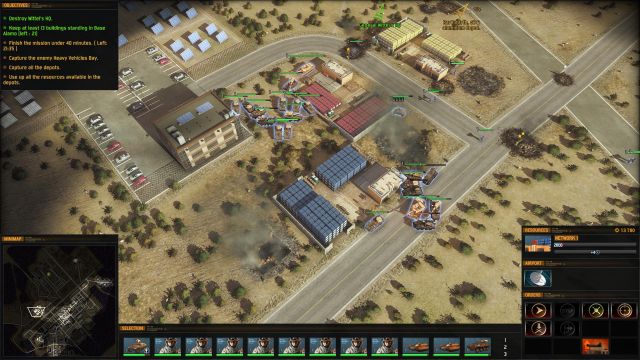 Another oddity with the campaign is when the faction you’re playing changes between missions. Just when you’re getting to grips with the Chimera units, the next mission may have you playing as the US, which at times can break the flow. Some players will appreciate the change while others may find it a little frustrating, even if it’s offering variety as the campaign progresses. That said, there are missions where you have to control two different factions at the same time which is a challenge.

Each faction in the game has their strengths and weaknesses (as you’ve expect) but it’s not until you start playing the multiplayer that these become more apparent. The US and Chimera could be considered the more “traditional” RTS factions, with light and heavy armoured units backed up with specialist troops. The Cartel, on the hand, are quite different: they utilise more advanced technology which also includes stealth abilities.

The real challenge in Act of Aggression is understanding what every unit does, what can counter it, and how to best use it. Each faction has upgrade tiers which are only unlocked after specific buildings are built. These tech tree tiers will then open up even more possibilities for existing units, by augmenting their weaponry or even adding a new ability. Once these abilities are learned, they are then automatically applied to both existing units, and all future units. The US and Chimera come with three tiers of progression while the Cartel comes with two.

At first glance the Cartel appear to be the most powerful faction, but dig a little deeper and they do have limitations, such as no real long-range firepower, making them more effective at stealth and hit and run tactics. The US, on the other hand, have some formidable weaponry at higher tiers such as the rocket launching HIMARS which can just about shoot halfway across a map. There’s a great variety of unit types for all factions, opening up all kinds of tactics depending on your preferred play style.

While Act of Aggression‘s graphics are great, with massive explosions, realistic smoke trails from rockets, and detailed landscapes, some of the buildings do tend to look a little too similar. This is especially apparent with the Chimera buildings, which are generally big square blocks, making particular buildings hard to pick out in the heat of battle. Obviously, things do become more recognisable the more you play, but a little more effort to distinguish some of the faction’s buildings might have been nice. 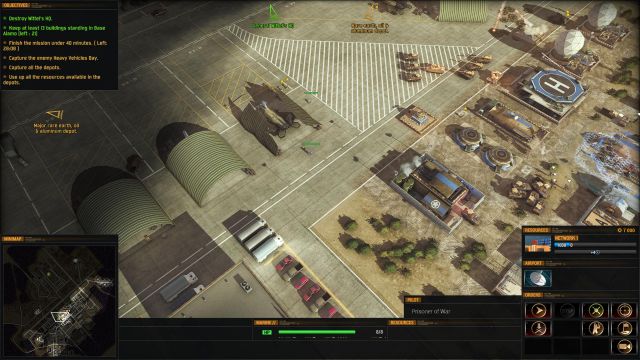 The real star of the show is the multiplayer, which comes with a stack of maps and an easy-to-use lobby system to find games. There’s a selection of different maps for various team sizes should you want to team up, options to play with no super weapons, and… well, everything you’d expect to make it easy to get a game up and running.

Once you’re in, the tactical options available create a sense of tension that I haven’t felt in multiplayer since the early C&C games. Do you start creeping towards your opponent with turrets? Do you start with an economy build and go heavy with resource collection? Do you attempt to capture all the banks right at the start for maximum money generation? Do you apply immediate pressure by attacking resource collectors? There’s a lot to consider which makes the multiplayer incredibly fun.

There are going to be inevitable comparisons between Act of Aggression and the classic Command & Conquer: Generals, but to my mind, Act of Aggression is the better game. C&C is dead (thanks EA) and Eugen’s RTS is a welcome addition to the scene. If you love the style of C&C then this is an essential purchase – even if it does have a few flaws in the story presentation and voice acting departments.

I’ve had a complete blast these past few weeks, notching up well over 150 hours in multiplayer, and I can see that this is a game I’ll be playing for some time – much in the same way I still play Red Alert. Act of Aggression just ticks all the right RTS boxes.

For more on Act of Aggression check our guide and tips.