Kalypso and bitComposer are back with another game in the Air Conflicts series with Air Conflicts: Vietnam, and like its predecessors, it’s bringing more arcade flight action to the PC.

Thrust into the Vietnam conflict, pilots are tasked with undertaking risky missions against the communist forces of the north in an effort to stop the spread of communism throughout the region. Well, we all know how that worked out.

I can practically hear The Doors in this image.

Just to reiterate, Air Conflicts: Vietnam is not a flight sim no matter how much we (ok, I) would want it to be. It’s more of an arcade action title thrusting players into the cockpits of some of the iconic aircraft used during the Vietnam conflict. This is made plainly obvious by the fact there’s an option to play the game with a controller, joystick and keyboard.

Opting for the keyboard option because my joystick has gone AWOL and for some reason the game would not recognise my Xbox controller, the controls were simple enough and actually work relatively well on the keyboard/mouse combo, no matter what flying machine you’ve opted for in a mission.

The missions themselves are broken down into small chunks with story cutscenes jumping in between each segment. These small bites of action and cutscene work pretty well, mainly because some of the missions are quite short with small mission zones. In fact, the very first mission you can fly across in matter of seconds which was a little unexpected.

As this is set during the Vietnam conflict, there’s the obligatory introduction of choppers. If you play games which include choppers then you’ll know they can be a right pain to control, especially when using a keyboard and mouse combination. Fortunately the control  system is not too bad here; though it takes practice and can be a little fiddly, especially on choppers such as the Chinook which is not exactly speedy making you a sitting duck for the AA. 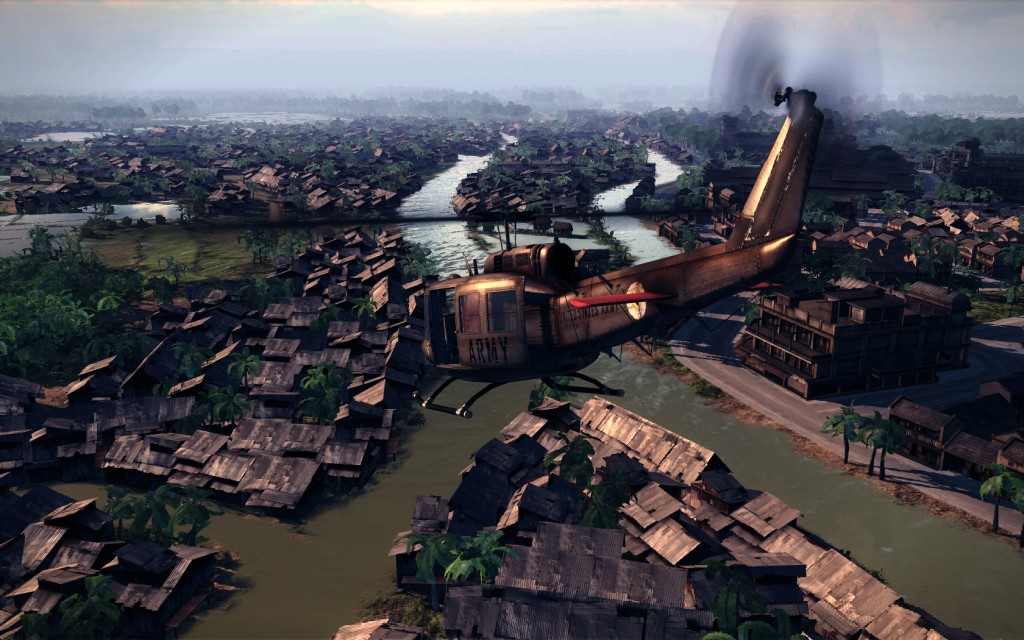 This isn’t a Chinook. However, I’m fairly sure it is a helicopter of some sort.

With a whole collection of aircraft and choppers it would be unfair to give you them all right from the start. Instead, the more you play, the more aircraft unlock. This is one of the incentives to keep you playing and get through the missions to find out what’s waiting on the deck of the aircraft carrier.

With mission progression comes the ability to hop between any aircraft that happen to be on the mission with you. This means that although you start out in a particular aircraft, the chances are you’ll have to switch and control something completely different to complete the mission successfully.

For example, on one mission you need to spray Agent Orange over a forested area but it’s protected by AA guns. You need to switch from the transport spraying vehicle, which is incredibly slow and comes with no weapons, into one of the jets to take out the AA. Then you can start spraying in peace (or war, as it happens.) With the AA down it was time to start the war crimes by spraying chemicals all over the enemy. I didn’t exactly feel comfortable doing that, and coincidentally neither did my character who launched into a diatribe after the mission was complete about how it all felt rather “wrong”.

After running out of Agent Orange, the US just threw helicopters at the Viet Cong.

The game is living up to its billing as an arcade action title, as the combat can be fast and furious in the speedier jets and locking on with cannons or Sidewinders is not easy. I think I took over 20 attempts at one of the earlier missions trying to take down three MiGs. Sure it was frustrating, but I only had my inept targeting skills to blame.

With aircraft working as support for ground troops, a lot of the time is initially spent zipping over the lovely looking Vietnamese jungle picking off AA, ground troops and vehicles. You’re busy making sure areas are clear for troop landings and taking out key enemy locations. In short, the missions are pretty much what you’d expect to find in a game based during this particular conflict.

There are some handy views that can be switched to help with all this, including the bomber view which is targeting from below the aircraft. It’s a nice feature but so far I’ve found it a bit hit and miss (see what I did there). There’s also a trusty missile/bomb cam view; fire one off and hold the mouse button to see it if hits.

A feature that’s specific to the choppers is the ability to switch into the gunner position. A few missions move you from pilot to gunner to strafe the enemy or launch grenades on AA vehicles which is a nice break from trying to fly around defensive ground positions or launching a barrage of missiles on to huts and AA placements.

Returning after stranding yet another hapless soldier in the jungle.

To make you feel like you’re part of an elite team of flying aces, there are other pilots in the squadron who have to be managed and selected for missions. Fellow pilots can be killed in action or even go missing. If you really like the chap then there’s the option to attempt a rescue. That’s only if you can be bothered of course, after all he’s just a bunch of pixels. From my experience their AI is not the best so I would just let them fester in the jungle for being a bit crap.

Missions aside, the game does also provide multiplayer support for up to eight players, although at time of writing I’ve not been able to test this but it’s there for some quick dogfighting action.

After sinking a considerable amount of time into the preview build, Air Conflicts: Vietnam should deliver on the arcade action, and the missions are fun and quite varied if a bit on the short side at times.  The game is also managing to capture the atmosphere of the conflict rather well with its dense jungles, monsoon weather and period aircraft. If you liked the previous Air Conflicts games then this will likely appeal. Just remember, this is an arcade game and not a sim, it can be fast and furious.

Air Conflicts: Vietnam launches on 18 October and can be pre-ordered from Steam now.

By Martynas Klimas18 hours ago
Previews