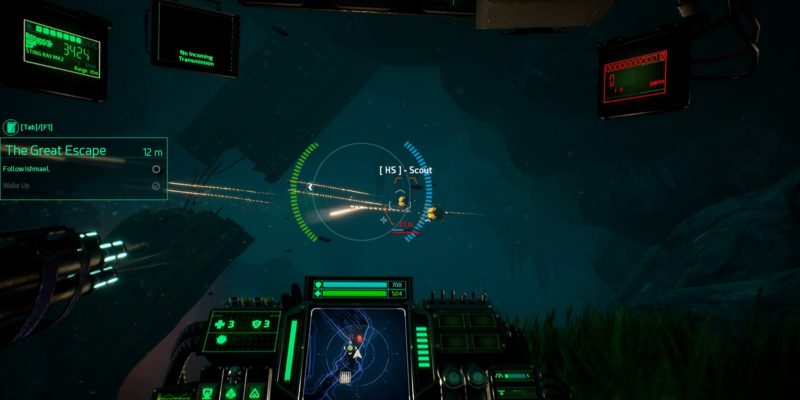 Aquanox Deep Descent has a fair amount going on under the ocean waves. Therefore, we’ve put together this handy beginner’s guide to tell you all about the game’s mechanics: combat and otherwise. Join us under the sea and you’ll be blasting things to pieces in no time. Or maybe you’ll be the one getting wrecked by the enemies. Either or.

To begin with, you can save anywhere at nearly any time. Unlike most other modern games, Aquanox Deep Descent has a 90’s FPS-style quicksave feature. And you’re really going to want it, as things can go horribly wrong for you whenever you turn a corner. Saves come in auto, quick, and regular manual forms and are easy to jump between. It’s worth having a separate manual save when you first leave a docking bay to go on a mission in case you want to try again with a different submarine without having to navigate back, but I’m getting ahead of myself. 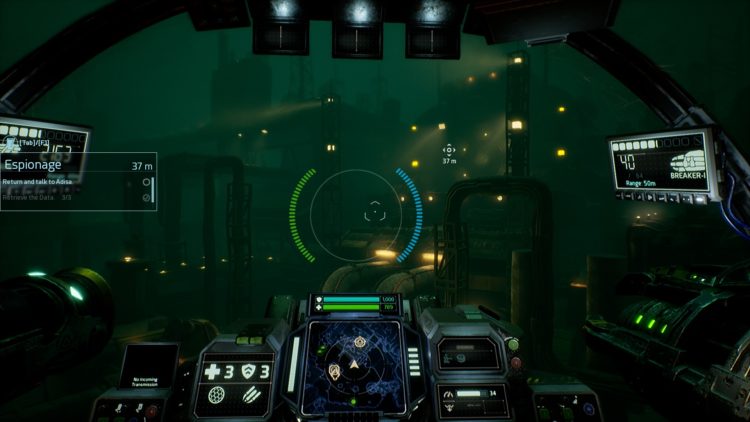 Here’s how you’re supposed to get past the beginning

I just want to get this out of the way. The beginning is probably too hard because you’re supposed to do it a certain way. Although it seems like you’re meant to fight everything, you are absolutely not meant to fight everything. At one point, you’re following Ishmael through a cave system and he’s leading you to meet Okabe, but enemies keep showing up. At this point in the game, you’ve got a weak craft with poor weapons and you lack the resources to craft more healing items. It makes for a truly poor first impression.

You’ll be right out of the tutorial at this point, so it’s understandable to not have your bearings. But quicksave frequently and don’t waste healing items. More importantly, you’ll need to lean on your shields. If you’re out in the open with no shields, you’re in trouble, so back off and wait for them to recharge. For the most part, though, run. The last two parts of the section require no fighting at all. Just rush past everything as best you can. Once you get to the open area where you’re meeting Okabe, don’t even think about the enemies. Just go straight to the marker on the other side.

The entire section is extremely doable but it just doesn’t make it all that clear that you’re in no shape to fight all these strong enemies with your one puny weapon. Once the game opens up and you become more accustomed to its mechanics, then it becomes a lot easier. Speaking of easier, Aquanox Deep Descent can be a very tough game, even on normal. I personally detest putting games on easy and almost never do it, but the difficulty is problematic enough that I bumped it down halfway through solely because I was tired of re-loading saves. Anyway, on to the main event. 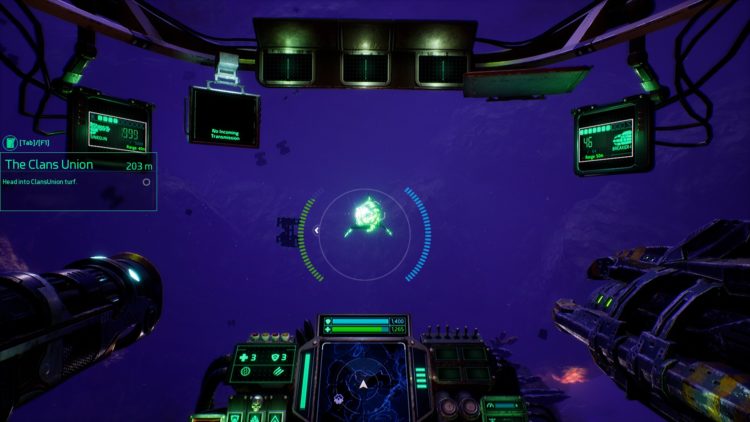 Once you’re out of the tutorial you’ll be able to dock at ships. There, you can change your ships out, upgrade them, equip new weapons and abilities, trade, and talk to people. Aquanox Deep Descent gives you a good amount of currency to do what you want. You’ll unlock more ships as you play the game and they vary in speed and defense. For most of the game, having a fast ship means you can turn and move much faster but can take much less damage. The bulkier ships obviously do the opposite. I truly don’t like how slow the latter are, though, and find the game to be significantly more enjoyable in nimbler ships, so I’d suggest using those. If you’re struggling you can turn the game down to easy where using a fast ship won’t be as much of an imposition.

You’ll gain access to several types of guns throughout Aquanox Deep Descent and preferences will vary, of course. But I preferred to always have a machine gun on my left hand with an explosive weapon on my right. My favorites are the breaker (torpedo) weapons and the shard (rocket launcher) ones.  They’re both great for making short work of weaker foes. The torpedoes home too, but enemies can fire chaff to cause those to miss. Shards must be aimed more carefully, but you’ll hit your target more often than not as long as you’re a decent shot. You’ll most often gain new weapons via completing side quests. Side quests also typically pay thousands of credits, which are helpful. It’s worth mentioning that locking onto enemies is mainly for showing how much health they have and keeping track of them. None of the non-homing weapons will zero in on enemies and you’ll need to aim manually, even when locked-on.

The combat in Aquanox Deep Descent is generally tough when you’re up against several foes. They tend to sit still and concentrate fire on you all at once, which makes hitting them easy but surviving hard. Which is why you’ll want to use a ship with a lot of jumps to routinely dash to the side while taking enemies out with breakers or shards. Softening them up with some machine-gun fire is also a pretty good idea generally. As I said before, though, quicksave before encounters. You’ll save some serious time that way. Also, enemy shields recharge, so don’t let up. I’m sure that’s obvious, but they have the same capabilities that you do. Save for the mutated sea life that shows up. Most of those aren’t a problem, but there are occasions where they spawn in huge numbers and you’re going to want to keep moving. Don’t be afraid to run. 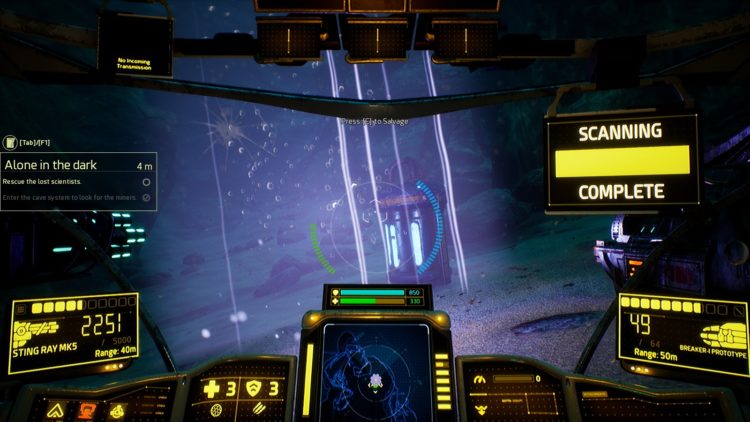 As you travel across maps in Aquanox Deep Descent, you’ll notice purple gear icons on the mini-map at the bottom of the screen. If they’re solid purple, that means you’re at the same height as them. If the purple points up, they’re above, and if it points down, they’re below. The game gives you plenty of resources, so don’t be afraid to use them to craft ammo and health items. Repair kits are easier to make than shield kits, though, so I’d recommend prioritizing those. You can craft everything while out in the field, but make sure you don’t try it in combat as going into those menus via pressing L-Alt doesn’t pause the game.

You can also switch weapons from that same menu, so don’t be afraid to swap things out if you’re having trouble. Certain weapons really do make all the difference. For instance, you’ll fight a whale a few times and they’ll either be easy or hard depending on the weapon. Use breakers and lock onto their weak points and the fight won’t be a problem at all. Additionally, remember to use your abilities. Early abilities let you fire a barrage of homing missiles, create a backup shield (which is really helpful and I recommend always having this one), or a move that lets you charge at foes and do a ton of damage. Two of the ships also have secondary weapons that fire automatically, but you have to remember to turn them on.

That’s all for this beginner’s guide, but it should hopefully be all you need to get through whatever Aquanox Deep Descent throws at you.