It’s usually not very promising when a developer with no previous experience on a classic franchise announces that they’re rebooting it. Most of the time, those don’t turn out so well. Aquanox Deep Descent is a re-imagining of the franchise wrapped in a modern package. And it’s very good! The visuals are strong, the underwater dogfighting is mostly satisfying, and it has a well-written story that will likely please both old and new fans alike. I wish there was some sort of end-game and more additional content, but this remains an enjoyable experience that didn’t bore me throughout its 15-hour runtime.

Aquanox Deep Descent tells the story of a future where the surface was ruined by war and mankind was driven into the ocean. A layer of fatal nano-plankton makes it impossible to return, warring factions strive for some sort of hegemony, and nano-machine enhanced humans that have lost their minds threaten the entire balance. The game begins when the four cryogenically frozen survivors of Project Nammu, an endeavor meant to free mankind from the sea, are awoken and tasked with fulfilling their purpose.

Although I wasn’t expecting it, the story in Aquanox Deep Descent is actually quite engaging. Almost all of the dialogue is fully voice-acted and the narrative is well-paced and interesting. The four main characters all have cryo-amnesia (naturally), and I liked learning about the undersea world, which is known as Aqua. Unfortunately, a good amount of the voice-acting is surprisingly bad. For instance, the leader of the four cryos, Kaelen, has one of the most wooden voices imaginable and several other characters don’t fare much better. Still, there’s a lot more going on here than I would have anticipated. There aren’t any 3D character models and everyone is represented by drawings, which was a good way to go, as I’d rather have artwork than awkward 3D models. 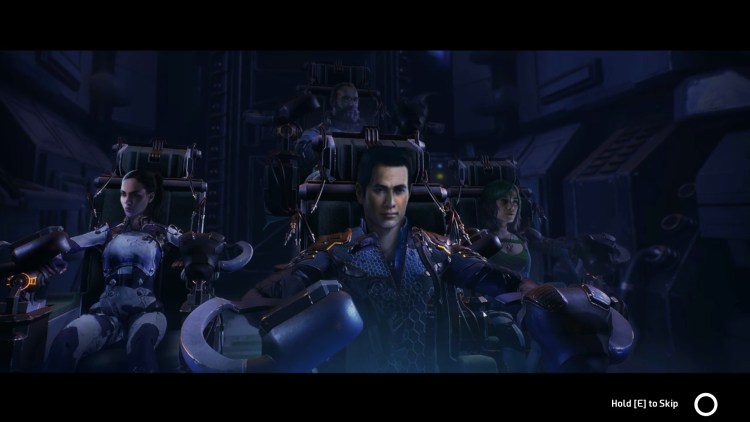 The campaign in Aquanox Deep Descent can be played cooperatively by up to four players, each controlling one of the four cryos. Or maybe they’re all in one DSF? I’m not actually sure. There are six submersible ships called DSFs that you’ll unlock by playing and they all have different stats. Some are built with speed in mind, others with defense. Some are in between and which one you’ll prefer will vary based on personal preference. The difference between the faster and slower ships is massive, though, and I strongly preferred the former. While piloting a quick one, you turn and aim very quickly and can travel at a faster clip. Holding down the shift button lets you boost as long as the meter has charge. Slower ships have more boost than faster ones, but they take a lot longer to refill their boost gauges. Each ship also has a certain number of jumps that allow you to quickly evade in any direction. These are all on cooldown.

Combat plays out like a typical dogfighter. You equip one of two main weapons, such as machine guns, shotguns, rocket launchers, and torpedoes. You can take whatever you want, but it’s naturally a good idea to have a lighter weapon and a heavier weapon depending on the enemy you’re facing. Much like the ships, the weapons feel very different. My personal favorite is the shard-type weapon, which functions like a rocket launcher. You can lock onto your foes to see what type of DSF they’re piloting and also see how much shielding and health they have left. But aiming is all manual unless you’re using homing weapons. The aiming feels accurate and your enemies explode in a satisfying way upon depleting their health.

While combat is enjoyable in Aquanox Deep Descent, I also found it to be frustrating a fair amount of the time. Every craft has a certain amount of shields and health. Shields recharge after time and both can be repaired with kits that you purchased or craft. But I found that enemies can do massive amounts of damage to your DSF in no time. In order to actually hit your foes, you have to aim carefully and boost to the side, but it kind of requires you to be a sitting duck. The game is fairly fond of throwing four enemies or so at you at once, which can drain all of your health and shields before you even know what’s happening. There were plenty of occasions when I’d move forward, only to find several enemies waiting for me that then immediately started attacking. Even the sturdier DSFs can be taken down like they’re made of paper depending on how many enemies you’re up against. You’ll also have to worry about mutated sea creatures, such as sharks or jellyfish, some of which can come out in you huge numbers and tear you apart. 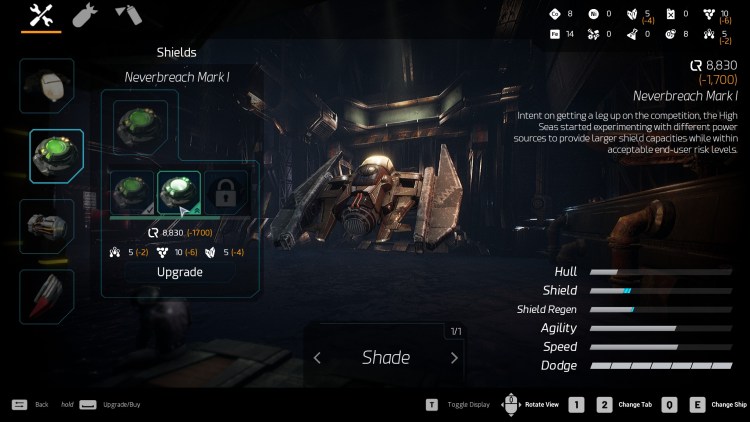 Down to one last breath

At least this can be mitigated. You have a skill called one last breath that will restore part of your health and shields if you take a fatal hit, plus it’s very easy to come by health and repair kits as you can craft them out in the field. Therefore, I can chalk my issues up to “frustrating, but not too bad at all.” Of course, some missions are worse than others. Speaking of missions, you’ll move Aquanox Deep Descent’s story forward by doing main missions. These have a good amount of variety and you’ll rarely be doing the exact same thing repeatedly. The game is made up of a bunch of maps that vary greatly in terms of size and visuals. Some are smaller and filled with caves and narrow spaces, others are wide-open and quite large. All maps are connected via warps, so you can go back to previous areas if you’d like.

There are also side quests to undertake for extra currency or new weapons. Some are simply bounty hunter missions, but others have more of a narrative focus and some of the rewards make them worth doing. The maps also have a lot of containers to score salvageable loot from. This is usually in the form of components you’ll use to craft resources and ammo, plus you’ll use it to upgrade ship parts. All salvage is marked on your mini-map and generally easy to locate. I rather enjoyed hunting it down. Some containers have unique weapons in them too. Two of the DSFs can equip secondary weapons that will fire at enemies automatically.

Aquanox Deep Descent also gives you two abilities that can be recharged. My personal favorites are summoning drones to fight for you and an extra shield that can be a lifesaver. The game gives you a fair amount of options that let you customize the way it plays to a certain extent. You can even change the paint jobs of your DSFs, which is really more for co-op than anything, as the game is played in first-person. There’s also a dogfighting mode if you want to try your hand at PVP. I just wish there was some sort of post-game that let you explore more or finish up any sidequests you didn’t complete. As I said, though, the game can take around 15 hours if you do most of the sidequests and explore a lot, so it’s not like it’s too short. 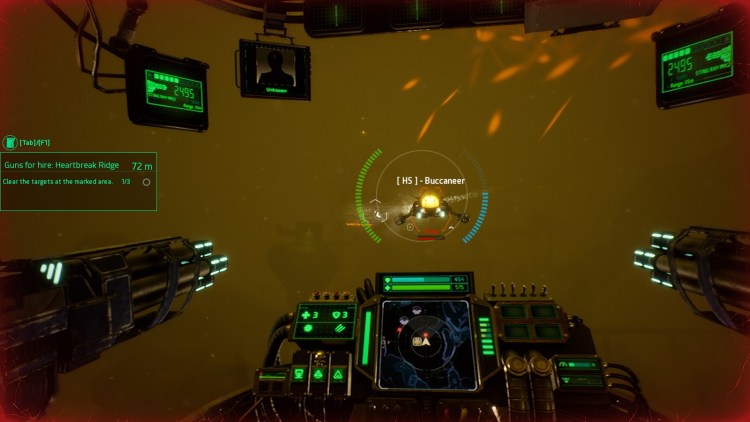 Aquanox Deep Descent successfully delivers on what it promised with an enjoyable story and ocean maps that are fun to explore. How quickly enemies tear you apart can get frustrating and the voice acting is often rather poor, but I had a good time with the game and think anyone interested in its premise will too. I also really like firing off torpedoes and watching the enemy ships explode. You should give it a try. 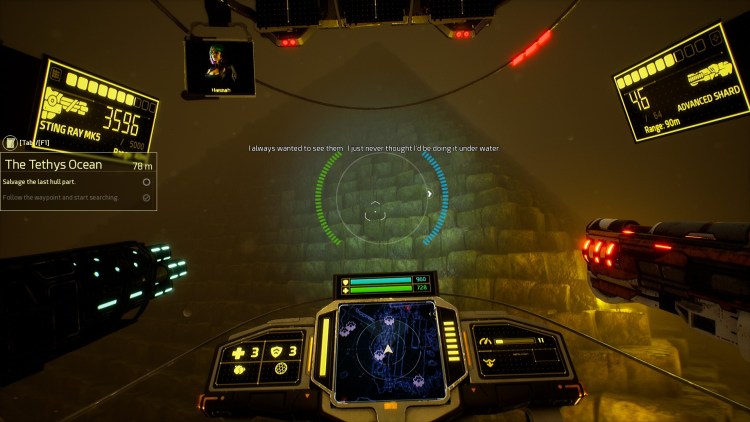 Duking it out underwater is a lot of fun in this game. The visuals are well-done, it plays well, and the story is quite strong too. Very much worth a look for anyone intrigued by its premise.