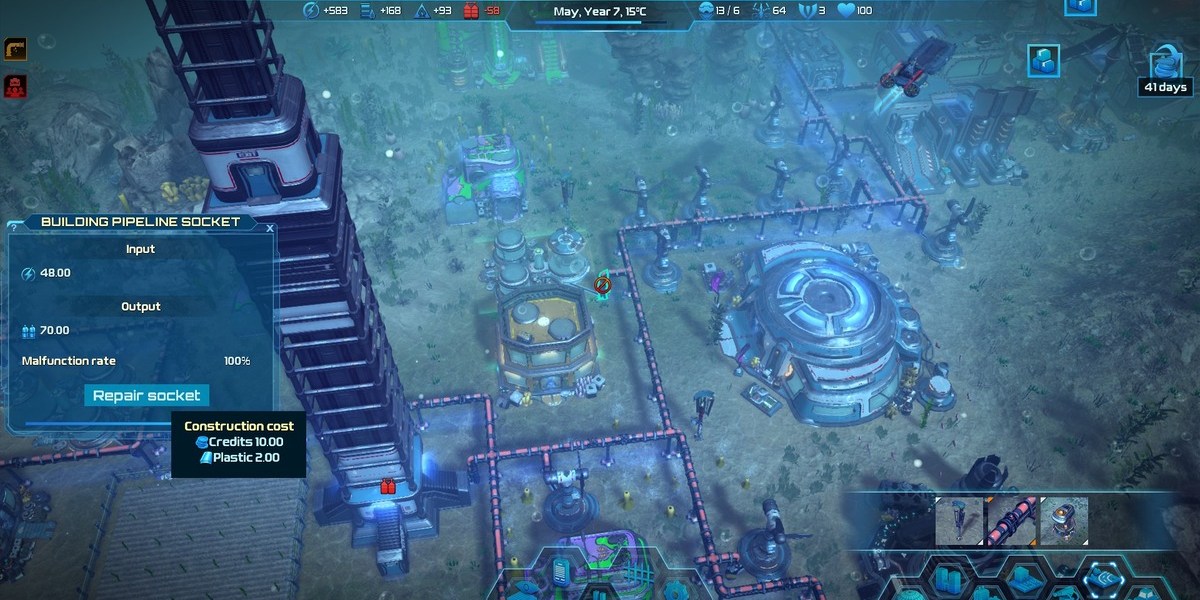 Have you tried playing Anno 2070, but felt it was too hard (or, perhaps, inoperable?). Then you’ll probably enjoy playing Aquatico, a city builder with but two upsides: it works without nary a Ubisoft launcher in sight, and is much, much easier than Anno.

The premise of the game is this: humans of the far future are looking forward to eking out a new life in space. But space struck first, and an asteroid caused flooding that rendered the surface of the Earth uninhabitable. The survivors are now striking out to raise underwater cities on the seabed. The heads at New Atlantis have just charged you with being the mayor of one such colony. The bots can collect steel from the random piles on the ground, but the detritus of fallen civilizations is untouchable. Screenshot by PC Invasion

And that’s all you’re getting as far as the plot goes in Aquatico. Simply choose your map and start building a colony. There are no scenarios, campaigns, or challenge modes — nothing; you build stuff to build stuff, but underwater.

Raised a town on Monday, soon I’ll raise another

Like many games of this genre — though I’m mostly thinking about Anno — it’s a game less about building cities and more about maintaining manufacturing chains. Plant X produces X, and X goes to plant Y to create Y, which can then be used in construction or sent to plant Z. Some will be dedicated to keeping the human settlers alive and happy, and others will fuel your endless expansion. Most of the work will be done by drones and only some occupations — notably drone construction — will require a human worker.

But while many games of this type run the risk of you exhausting your starting resources without having built up a basic self-sustaining colony, Aquatico solves the issue with money. The most rudimentary structures require only money to build and maintain, with bots presumably assembling them out of printed pictures of NFTs. 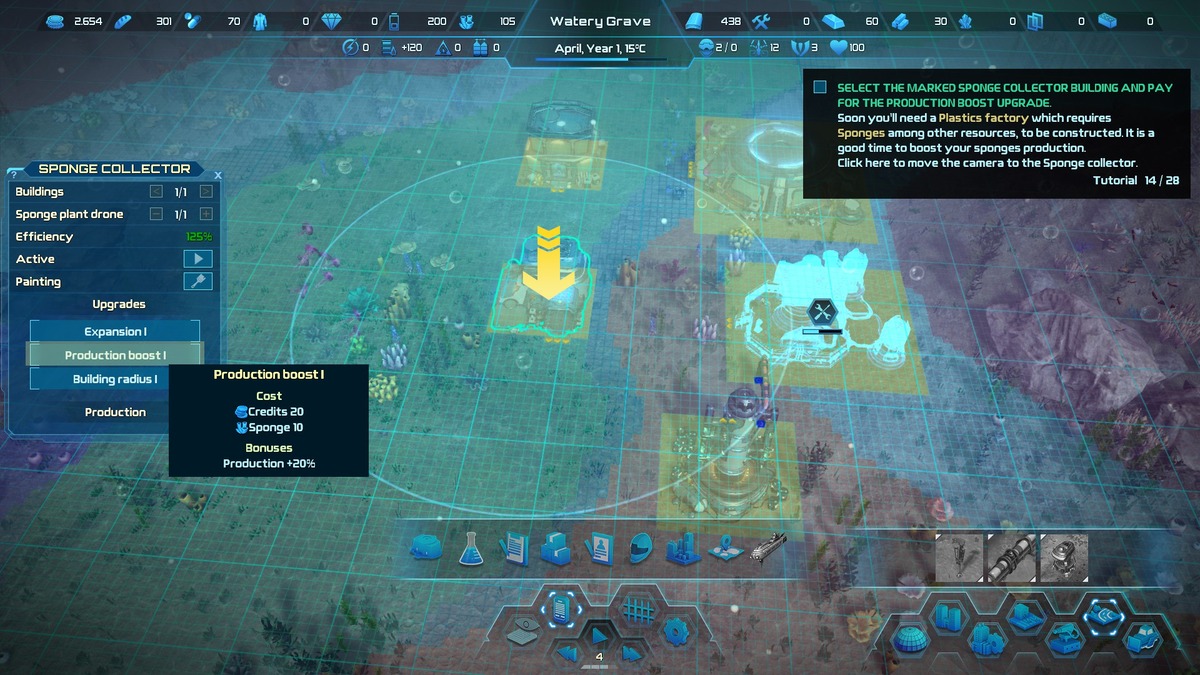 Most buildings can be upgraded in Aquatico. The upgrades are instantaneous, have no graphical component, and have to done manually on every structure. Screenshot by PC Invasion

Only then do things get annoying as you’re required to build a sponge gatherer place to send a bot out to gather sponges, and then a plastic factory to turn sponges into plastics. This is the core gameplay loop, have fun.

Oh, but not all goods in Aquatico can be transported by bots or humans. Quite a few need to be carried by pipes. Before you start wondering what limitations this will impose on the colony, let me reassure you that pipes are universal and of endless capacity. There’s no downside to just hooking up the entire colony to the same system. But, watch out! Sometimes, a pipe leaks, and you have to click on the malfunction notification to then click another button to fix the leak.

Words fail to describe how boring it all is. I’ve seen it all done in many other games and with much more purpose, but in Aquatico, everything is taken to the banalest extreme. For example, behold your citizens. Each technically has a profile with age, specialization, and sex. You may even know who they’re hooking up with. 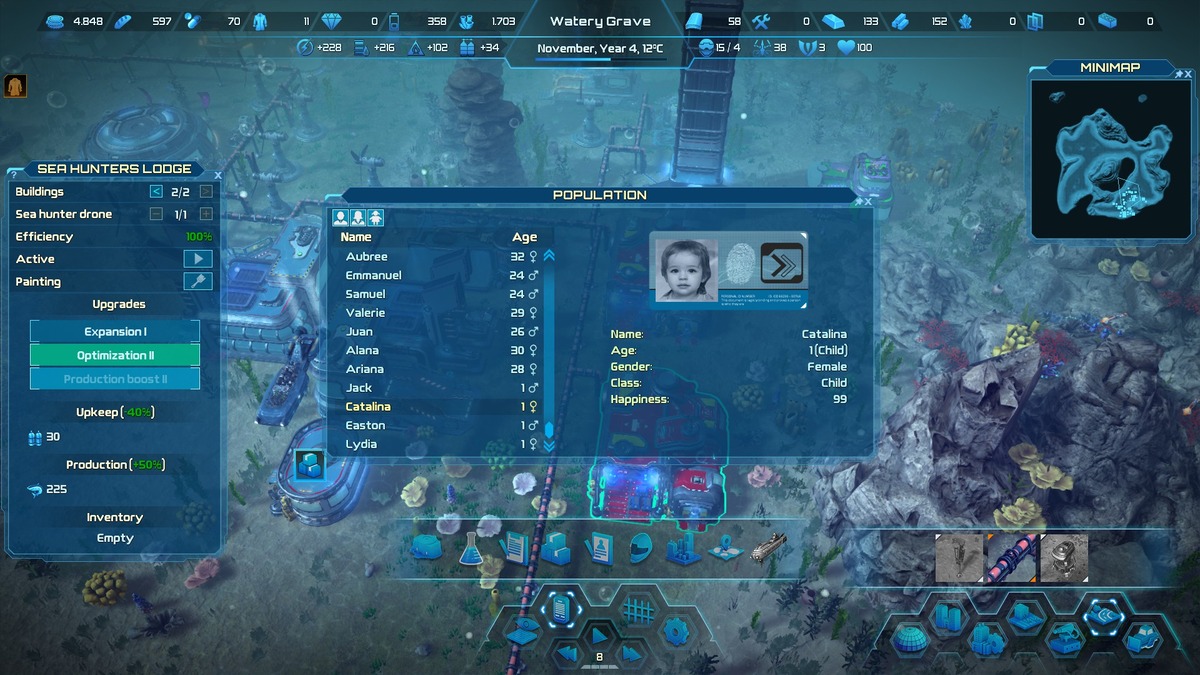 Look at this lazy layabout. Screenshot by PC Invasion

None of that matters since all those monogamous NPCs are interchangeable. This isn’t any of the Mars colonization games or Tropico, where individual citizens have stats that matter. You really have no reason to think about what they want and what they do, just fulfill such generic needs as food and nice lodging. Don’t worry, they’ll take any job and only develop a taste for finer things in life like clothing and medicine once you research the structures producing said things.

The dang research. Never have I seen a system more simple — or more wretched. It is but a thin tree where you either discover new buildings or new edicts to issue to the populace. There’s almost no way to impact the research rate as there are no research buildings or specialists in Aquatico. The only requirement is that you’ve unlocked the previous steps and have the money to pay for it.

I took my colony through three levels of development before I realized that I have to care about money or that research costs something. 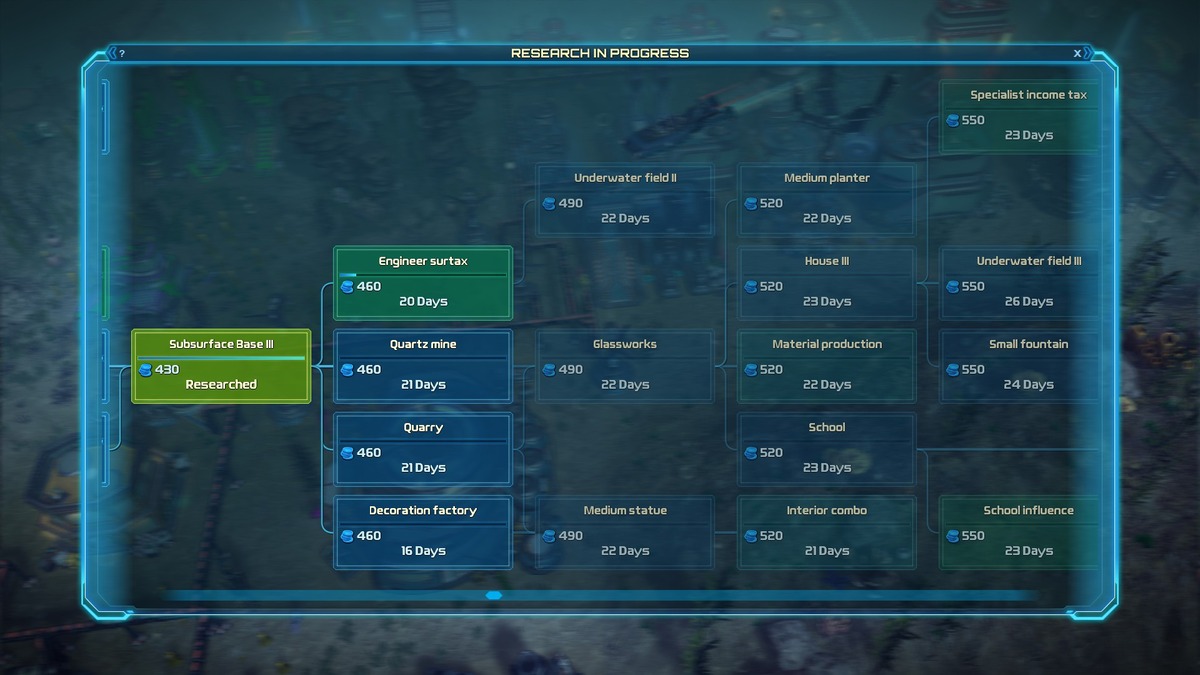 Finally, after advancing through three research tiers, I can unlock Medium Statues! Screenshot by PC Invasion

Most of the time, the only cost of research is your sanity. Let’s forget how divorced this system is from the rest of the gameplay. Let’s talk about creativity (or the lack thereof) instead. First of all, you’re never researching anything new and exciting. It’s all about giving you more busy work to keep your colony running. Any new factory is just a new supply chain link waiting to happen (or, rather, your existing infrastructure needing expansion) and none of it makes your game in any way interesting. At most, once you research guard posts, sharks will start threatening the colony — something that guard posts help against.

Secondly, there’s literally no imagination in what you research. In this post-apocalyptic far-future underwater city builder, you need to research benches and potted plants. Small sculpture and medium sculpture are two different research subjects. Those aren’t even special structures that need to be adapted for use with diving suits, they just sit in the open in the living domes. The future people that have a 6:1 drone-to-person ratio running their settlement have forgotten what a bench is and need to pay money (to whom and for what?) to remember how to combine two planks into a raised seating arrangement.

I’ve been to the year 3000, it blows underwater

At least when it comes to the actual industrial structures, you can, having reached level three of development, research such wacky technology like *checks notes* warehouses. Those are very different from your depots, which you’ll have already used for years and that already come with automated sub barges that basically beam stuff up and down for storage. 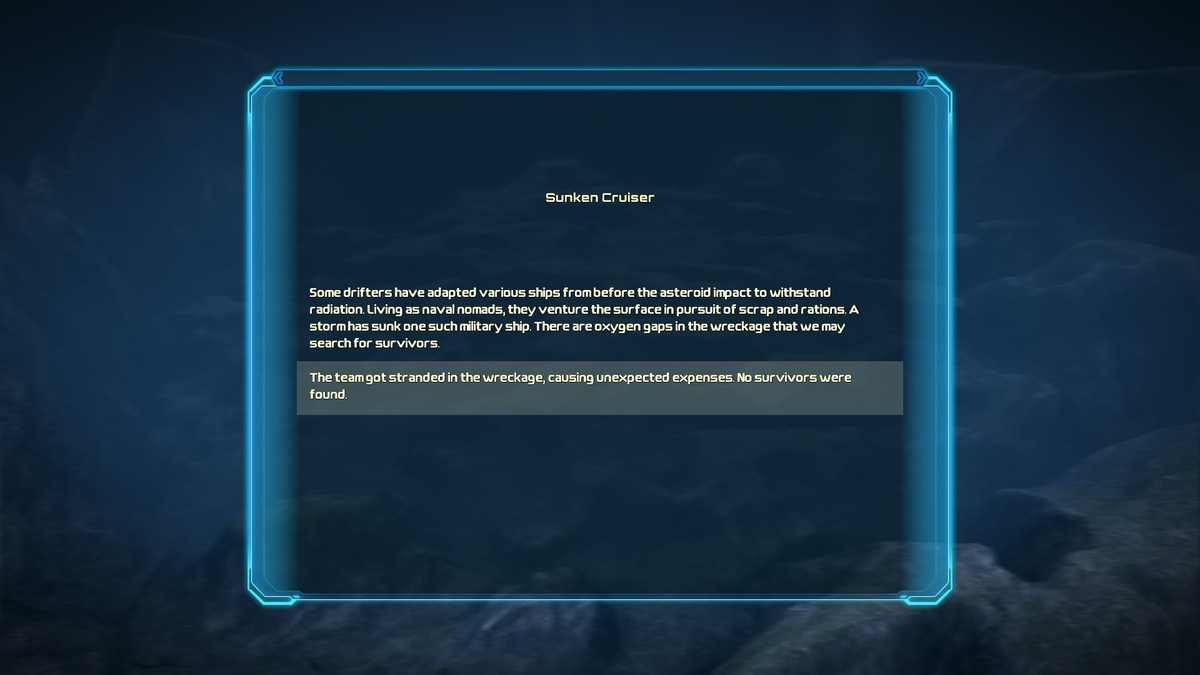 This is how the expedition quests look these days. You don’t even get choices. And the text is unclear: I didn’t lose any crew, we just didn’t find any new guys. Screenshot by PC Invasion

But wait ’til you get to explore the wider world in expeditions! Do you remember those from Endzone: A World Apart? Where choosing the right people and the right tools mattered as you were likely to get drawn into extended text quests where your choices mattered? What if that wasn’t the case and you just got flavor text and a pittance of resources instead? By Jove, this doesn’t feel like a perfunctory feature at all.

At least the developer of Aquatico understands that this may be a little lacking, as improving expeditions is one of the things on its roadmap. In fact, quite a few things that would make the game less boring are on the roadmap. The question remains, then, why would you play it now? For that, I cannot find a fitting answer; the game as-is offers nothing to anyone.

Aquatico is a city-builder that barely tries to innovate anything, and anything new is immediately overshadowed by how bland and mediocre the rest of it is.

Pathfinder: Inevitable Excess — Other Side of Threshold puzzle guide