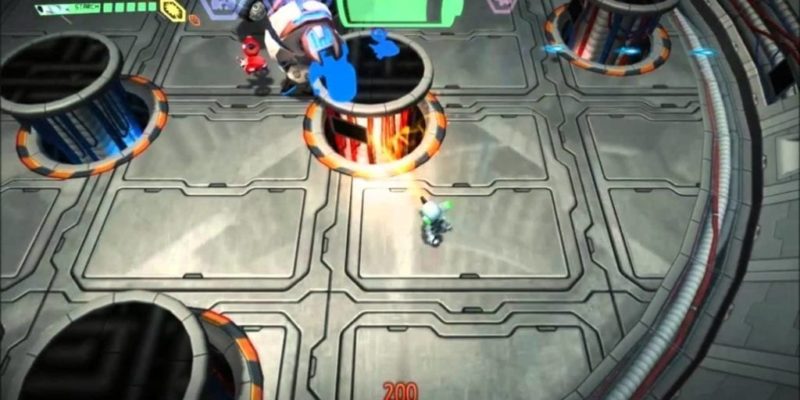 In my younger years, I often found joy in games like Gradius, Total Carnage, and Sunset Riders. While these games are varied in style or the elements in-game, they are essentially drawn from the same vein. The challenge among each of them was to make your way through mazes of enemies with just the right set of weaponry to mow them down to clear a path. And, for all intents-and-purposes, Assault Android Cactus also embeds itself amongst these classic titles. Worry not, seeker of retro flavor, it did one hell of a job paying homage to the genre, encapsulating the anxiety, and emphasizing its main goal: Nowhere to run, must shoot everything.

I spent a lot of time playing Assault Android Cactus the first go-around. To save a lot of space to be written here, please read the Early Access Impressions that dissected more of the game and my first impressions. In a nutshell, you are tasked as an elite android squad aboard a ship known as the Genki Star. It has now been overrun by mercenary robots looking to ravage the ship and its inhabitants. Cactus, the leader of the all female android squad, must now use brute force to rid the ship of its plague of robotic personnel.

Starting out, Cactus seems like the most well-rounded player. Her assault rifle primary and flamethrower secondary weapon seem like they can take on anything. Power-up orbs are collected from enemies, strengthening your fire, and can be maxed out if you go without getting knocked down. Each level restarts your fire, leaving you to sharpen your skills of dodging the bullet hell that can fill the screen. As more characters are unlocked, each plays an important part of the journey, and makes co-op a blast.Whether it is the energy draining beam that Starch holds, or the seeker rockets Lemon has a secondary, each can be balanced solo or with others.

Each character has secondary weapons that prove useful in all levels and boss types.

For those who haven’t ventured down the path of android anarchy, it’s treacherous and challenging, yet satisfying. Each android has a specific weapon in which they are selected to carry out. The secondary weapon can be enacted, thus creating a “save me” option for those who are engulfed in enemies or enemy fire.

Surviving is half of the battle, and the other half is blasting enemies. While there is a small emphasis on spray firing at overwhelming enemies, there is also a level of precision that is enacted in order to make it out alive. As mentioned in the Early Access article, the majority of the game is about managing space. Levels can change, towers will populate, and enemies may pour out of every crevice of unfolding architecture. While this may seem easily managed for someone just shooting down swarms, the entire time your battery power must be maintained and managed.

The first time running through Assault Android Cactus was roughly three months ago. Since then, I’ve played the incremental updates, but not nearly paying the attention to detail as I did when first laying hands on it. However, the variance in quality, which I thought couldn’t get any better, has been vastly polished since the game’s inception into Steam Early Access. The levels are more detailed with gradients and patterns now showing face on floor panels and ship parts. The game has been further optimized to deliver quality across varying graphic demands, and that is just in the visual department.

Getting hit multiple times will cause you to be knocked down, tasking you to pump the fire button, defibrillating yourself back into action. Enemies infrequently drop battery cells when destroyed which can cause frantic scurries just to obtain one before you die. This was one area in which balancing was needed from the first time played, and I feel it has been pleasantly altered. And just in time for the demands of the final boss, which is a true test of patience.

The balancing which I griped about in the early stages of play has been tweaked, or so it feels, delivering promise to those looking to complete the game wholeheartedly. This was mostly due to the battery drops causing frustration as they were more than sparse. Even now they feel limited, but with more of a purpose rather than punishment. And, making it through multiple levels will reward things like AI companions and the newly added Mega weapons that can be unlocked.

The best aspect to Assault Android Cactus is probably the Daily Rush. It opens up replayability for the long run and future potential content outside additional levels within the game. That’s something that I can get behind. The Boss Rush mode does the same for those looking to run back through high intensity battles and inflate your score for more unlockables. I do find that they are still excruciatingly challenging, but that is what makes the game worth it.

Previously, I found that the best part of the journey was the struggle and how it took copious amounts of persistence to get there. Defeating those enemies becomes celebratory, and deservedly so.

If there was anything to pick at, it would have to be in the multiplayer department. The expectation of online multiplayer has transgressed many areas of gaming. In terms of the multiplayer options, it would seem that Assault Android Cactus would include these. I did find it comforting that AI and local co-op are available, something that was utilized during strenuous boss battles in single-player. On the other hand, it could be incorporated into the regular online campaign.

Assault Android Cactus is the epitome of twin-stick shooters. It showcased additional content, polished visuals, and created a game where replay value isn’t an afterthought. It’s challenging and takes some real skill to land yourself in the top ranks. There is an essence of nostalgia lingering in its design, something the team at Witch Beam was able to knit together nicely.

I can’t stand behind the game enough, even considering its often unforgiving difficulty. The game presents itself as short on the level side, but compensates for it in Boss and Daily Rush challenges. The unlockables are fun, some even providing a deeper experience within the game.

If you want a challenge, pick up your controller, even you PC diehards, and play this game. You won’t regret it. The roll-call for games I have deemed nearly perfect are like unicorns. And, like the mythical creature, are often told in stories of old. Assault Android Cactus fits that narrative, exploding with color, and bows out more graciously than that horse looking thing with a horn.