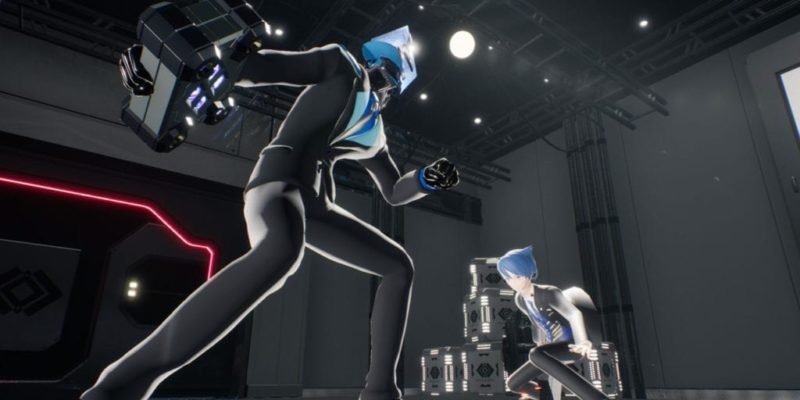 It isn’t often that developers try and match the high-octane intensity of character action games. Devil May Cry and Bayonetta set the standard for those, and there are rarely any games that can compete. Pulling off the fast, flashy, and highly technical gameplay is a rather tall order. Yet surprisingly, a lone developer, Wazen, has done just that with Assault Spy.

Assault Spy predominately tells the story of a spy named Asaru Vito. Asaru has been struggling to meet his quota after his boss tasks him with training a young woman named Kanoko. On a mission to case out the technology company Negabot, the two of them get caught up in a hostage situation. The company comes under attack by a man known only as Mr. Showtime, and the building goes into tight lockdown. It’s up to Asaru to fight his way through a horde of robots and make it out alive with the corporate secrets he finds along the way.

The plot in and of itself is fairly standard, but it’s bolstered by the fact that Assault Spy is predominately a comedy. Most dialogue exchanges occur in visual novel-style sequences with a lot of the typical trappings associated with anime tropes and the like. Surprisingly, though, the dialogue is actually rather funny. Kanoko’s trollish nature is a bit of a hoot. There’s also the stupid grandstanding of the game’s second playable character, CIA Agent Amelia Smith. These two in particular are a lot of fun. The entire cast as a whole is also surprisingly likable, and all cutscenes are fully-voiced by a talented cast. I wasn’t expecting to enjoy the story as much as I did, so that was a nice surprise. 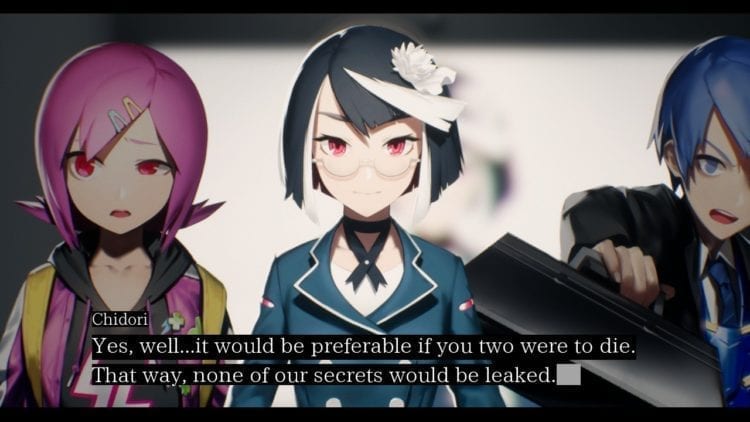 The Fast, Flashy Combat Is Truly A Blast

Since Assault Spy was developed by one person, its visuals are on the rough side. That being said, I think Wazen did a pretty good job. The character models are simple and the levels bland, but everything is fully functional. The character’s mouths don’t always move in the cutscenes and the non-combat character animations can be fairly janky, but I also found most of this to be fairly charming. The majority of the plot plays out between character portraits anyway, and the artwork is rather excellent. I like the character designs a lot, and the art is oozing with personality as well.

As this is a character action game, though, the focus is rightfully on the gameplay. And boy, does it deliver. Assault Spy has extremely fast, fluid, and extremely precise combat. I love games in the genre, and this one is something special. It’s insanely satisfying to pull off the game’s wide range of lightning-quick moves while dashing wildly around your enemies. And here the simplicity of the visuals definitely works in the game’s favor. Battles are chaotic and intense, resulting in a flurry of cool visual effects that do a great job of selling the game’s style.

Asaru’s moveset seems deceptively simple at first. There are three attack buttons: a light attack, a heavy attack, and the extra weapon attack. As you unlock moves for Asaru, you’ll be able to chain all three together in smooth, impressive ways. He and Amelia can also do a super quick dash, which can set up even more attacks.

Initially, all Asaru carries with him is his briefcase and business cards, making him something of an action businessman. He later gets access to an umbrella, which acts as a sword. Oh, and his business cards explode and can be strategically detonated. He can even call Kanoko out to distract the enemy. 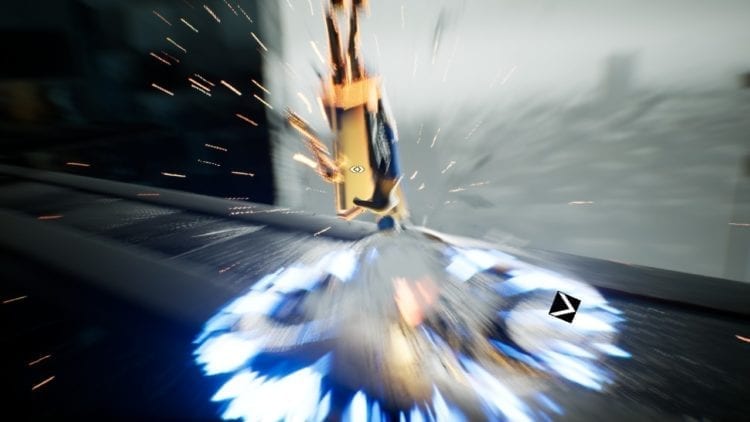 As Asaru, one of my favorite things to do is dash at an enemy, hit them full force with his briefcase, and send them flying, only to then dash after them and launch them into the air. I follow that with an air combo and a briefcase grab attack that can pull enemies back to you after you knock them away. It’s just awesome. And there are, naturally, variations on the attack commands. Delaying a button press can allow for different combos or variations of attacks. These require more precise timing but do extra damage.

Asaru can’t block, but the primary method of getting out of danger in Assault Spy is to dash out of the way. Successfully dodging with the dash is accompanied by a flash of blue and is really satisfying to pull off. On top of all that, Amelia not only has her own story mode with almost entirely new cutscenes, but she has a completely separate moveset as well. She and Asaru play differently to boot, which makes revisiting the levels again with her much less of a chore than it would be otherwise.  She’s less nimble and can block, unlock Asaru, making it necessary to massively adjust playstyles.

All encounters are ranked, with better ranks rewarding the player with currency that can be spent to unlock new moves at upgrade kiosks. The levels also have 50 Negabot employees hiding away to find, each having some more amusing dialogue and coming with a currency bonus. These are split up between the two story modes. You can even play three of Assault Spy‘s levels in any order you wish. It’s a solid choice that can help break up subsequent Asaru and Amelia playthroughs. 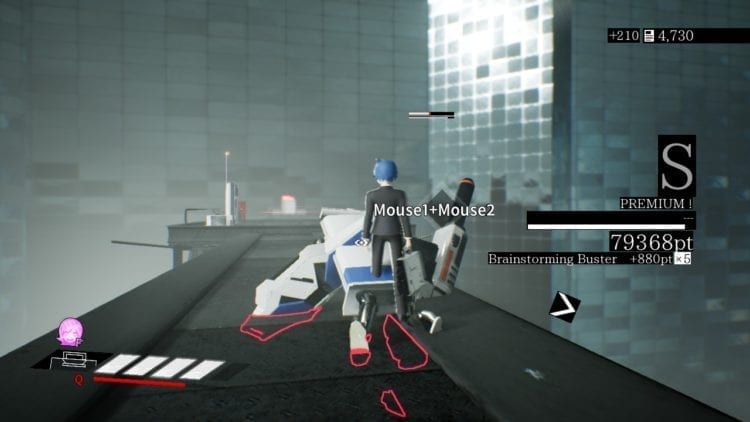 There Are Times Where The Camera Doesn’t Cooperate

Whereas Asaru is faster and based more around weapons, Amelia is slower and her attacks feel a bit weightier. She mostly fights with her fists but also gets a spear fairly early on in the game. She has a gun as well, which is a lot of fun to make use of. The two of them have their own unique special mode, too. Asaru makes use of overdrive, which allows him to slow enemies down and move super-fast for a short amount of time. Amelia makes use of a “hype mode,” which increases her damage if you keep her output up and a Super Amelia mode that makes her invulnerable and deal more damage.

Assault Spy does have a few issues, however. When fighting large amounts of enemies, the camera doesn’t behave some of the time. It’s also difficult to not get hit in the back by enemy gunfire when focusing on others. On normal difficulty, Asaru and Amelia can only take five hits from anything in lieu of a health bar. However, the game is mostly fair about this and liberally gives you healing items. Offscreen enemies also have an attack indicator when they’re about to shoot. However, it’s difficult to pay attention to these a lot of the time. While this and the camera are both problematic, they thankfully aren’t too detrimental to the whole experience.

The game has a bunch of boss fights, and they’re an absolute blast for the most part. All bosses have break gauges that you have to wear down. Once you do so, you successfully launch them and punish them severely. Making proper use of this oftentimes saw me taking away half of their health in one combo. However, two fights in particular are kind of obnoxious. One seems normal until it starts dropping in enemies to help the boss. 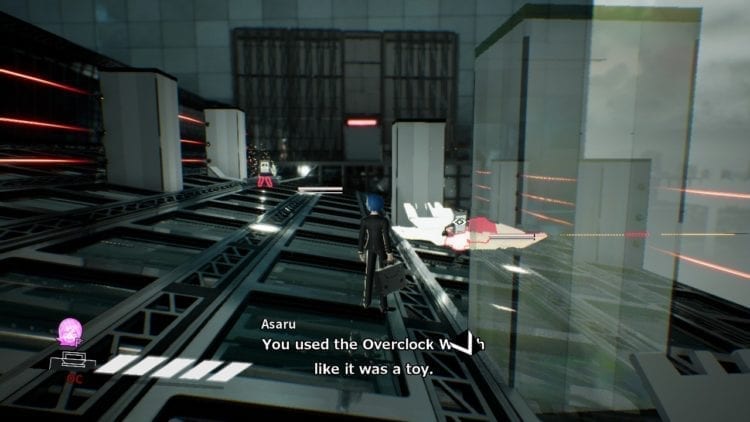 Each Playthrough Is Short, But There’s Plenty of Content

This didn’t work well. Either I had to focus on the boss and attempt to dodge the gunfire coming from offscreen, or I had to focus on the enemies while trying to dodge the boss’s attacks. I actually beat this boss once with one powerful enemy remaining, only to die immediately upon messing up. The game’s final boss also utilizes my most-hated boss fight trope: the regenerating boss. The fight itself is pretty cool, but most of the challenge comes from this gimmick. Getting past it was kind of a chore. Once I did, though, it was immensely satisfying.

Assault Spy‘s stories are fairly short, running at about 5-6 hours per playthrough with all of the cutscenes. But since there are two of them, that alone amounts to a solid amount of gameplay. On top of that, beating the game on normal unlocks hard, which changes up the enemy layouts and lowers your health from being able to take five hits to just four. Once you beat hard, it unlocks an even harder difficulty. The skills you purchase carry over, and you certainly won’t be able to afford them all in a first playthrough. That right there’s a great reason to play through each story twice.

There’s even a Bloody Palace-style mode where Asaru and Amelia can fight their way through 50 floors of enemies and bosses. If you die, it’s back to the beginning. So, Assault Spy has a good amount of content on offer. Coupled with the game’s high skill-ceiling and the fact that fights are ranked, genre enthusiasts will certainly have a whole lot to sink their teeth into. 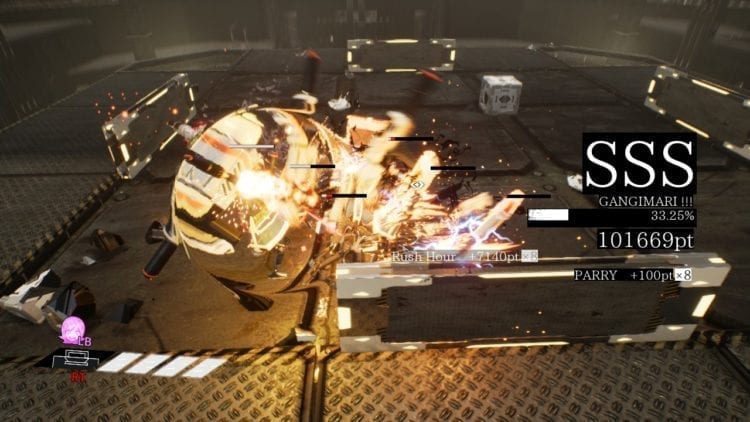 I Can’t Recommend The Game Enough To Genre Fans

Overall, Assault Spy is an absolutely fantastic entry into the genre that does a lot to differentiate itself from similar games. The fact that it was developed by one man only makes this more impressive. It’s got some issues with the camera, the graphics aren’t great, and a few bugs cropped up every now and again, but it’s definitely a wonderful time for genre enthusiasts. And it’s funny — we can’t forget that. The precision-based, extremely stylish combat makes it one of the most satisfying action games I’ve played in a long while, and it’s certainly worth picking up.

Assault Spy is a must-play for fans of fast, stylish character action. It's got some problems, but it's an absolute blast.