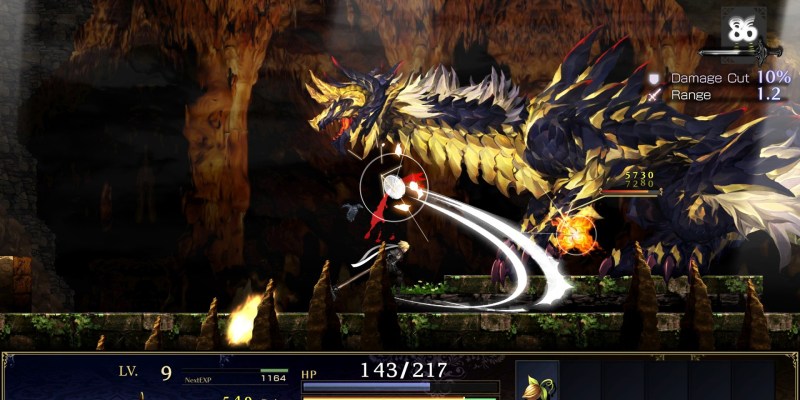 Every now and again I stumble on a game so much better than expected that I can hardly believe it. Astlibra Revision is an enhanced version of Astlibra, which was originally released in 2021. I’m pretty sure the title is meant to be Astrolibra based on the Katakana, but what do I know? Anyway, before the 2021 release, it was a web game dating back to the early 2010s. Astlibra Revision looks and feels like a doujin game, and that’s because it absolutely is. The graphics are a special combination of ugly and simplistic and, on the surface, the game looks generic. But it isn’t. This is an excellent game with a ton of content that grabbed me in a way that I wasn’t expecting.

Astlibra Revision begins with the protagonist and his childhood friend running from monsters. They get knocked out, and when the protagonist wakes up in a house he finds out that his friend is missing and that a talking crow has somehow brought him to safety. The two wander for eight years without finding another person, but they eventually stumble upon an adventurer who leads them to a town. Before long, the two are working for a guild in the hopes of finding the main character’s friend and learning just what exactly the talking crow, named Karon, is.

There’s a pretty fair amount of plot in this game. It’s surprisingly well translated and, honestly, the writing is far better than I imagined. Astlibra Revision is divided into a bunch of chapters that function as arcs, many with unique characters and focuses. They present a lot of intriguing mysteries and some very emotional story development. I won’t spoil anything here, but the plot even had me tearing up from time to time. It kind of reminds me of an Ys game. Considering how much I love that series, that’s pretty high praise from me. 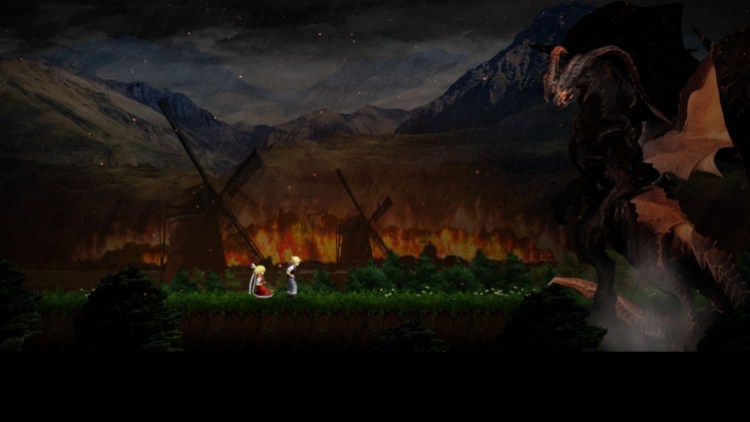 Astlibra Revision is a side-scrolling action RPG. At first, it seems almost insultingly basic. You can equip different weapons, shields, and armor and you can only swing your weapon in front of you or upward. But you find new moves in chests, and using the weapons and shields a certain amount unlocks new perks you can equip. After a handful of hours, you’ll be able to dash, backstep to avoid damage, do a shield bash, launch enemies with a charged upward swing, and counter-attack after blocking. There’s a surprising amount of depth here, and the game only grows more complex with time.

There are even magic spells that briefly transform Karon into different creatures — like a dragon that shoots fireballs. Hitting enemies generates mana, and you can fire off spells very frequently. You level up after gaining enough experience and then receive five points to put into your stats. Stat-building is one of the primary focuses in Astlibra Revision, and you can redistribute your points at will. But leveling up isn’t the only way to boost your stats. Attack, defense, and HP will be changed based on your equipment, as is standard.

But there’s also a giant tree — similar to the one in Path of Exile — that allows you more stat increases. Enemies drop different-colored gems used to purchase these increases. Purchase one and the next one can be bought, and so forth. As you move through the tree, you’ll find pathways are locked and require keys you have to buy elsewhere in the tree. It’s a well-thought-out system; you’ll frequent the tree often for your spending sprees. You can even convert gems to a different color if you happen to have an excess of one color and none of another. 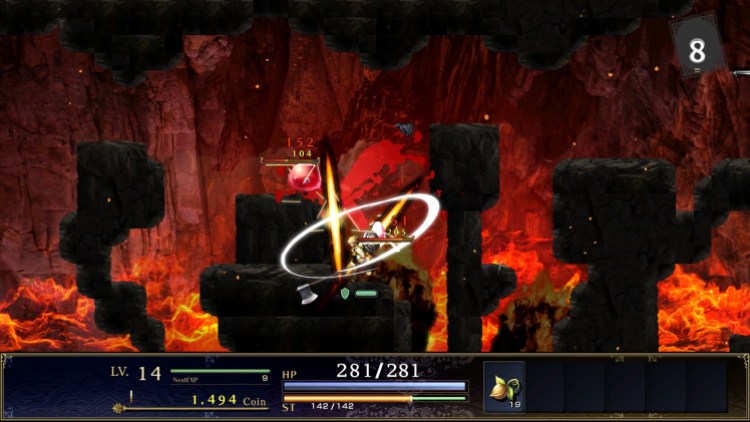 As you play the game, you’ll also happen upon magic gems you can use to slot your perks. These can require as little as one slot or even several, depending. Gems are offered by using equipment and spells, but some are also found in chests. As examples, you can discover a double jump perk in a chest, and you’ll get a skill that increases knockback from using a specific weapon. There are pages and pages of these, which allow you to tailor the experience to your own specifications. There’s so much variance and depth to it that you’re just always finding new things.

Astlibra Revision‘s chapters are usually geographically separate from one another. To the best of my knowledge, you can’t go back and forth between visited areas. As such, there appear to be many things you can miss. Some of these things are pretty major too, as a lot of the chests containing goodies are semi-hidden or not easily accessible. You might have to walk or jump through fake walls or interact with a tiny green jewel to make a chest appear. This could open up later in the game, though. It’s apparently over 60 hours long and I only knew of its existence three days prior to launch, hence why this isn’t a full review.

Then there’s the way you get new equipment. Monsters drop materials and gold to use at shops to craft new gear. Many of the shops in remote locations are a tiny building floating on a balloon operated by a talking pig named Mokyu. Once you reach a new area, one of your first orders of business is to try and get new gear made so you’ll stand more of a chance against dangerous new enemies. Enemies can hit very hard and, if you die, you have to return to your last save point. 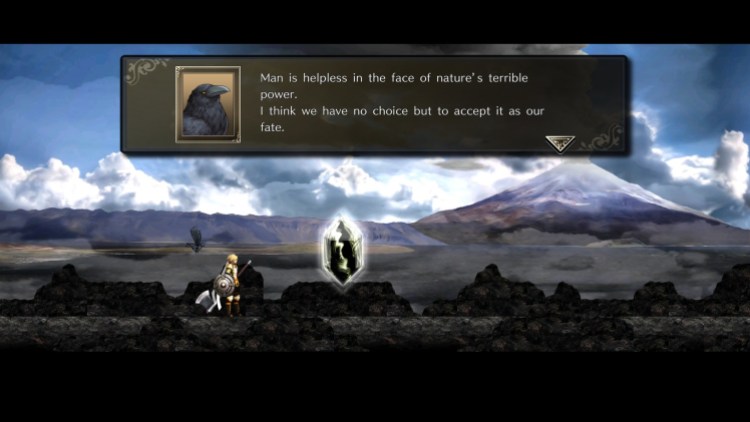 Save points are pretty frequent, but you have to be careful. Part of being careful is bringing sufficient provisions with you. You’ll need torches to light the way in the darkness, pickaxes to obtain ore from mining spots, and healing items when the going gets rough.

Astlibra Revision is easily one of the deepest, most captivating action RPGs I’ve seen in some time and I can’t wait to play more. I might end up updating this piece into a full review depending on how soon I’m able to get through it. But since it’s 60+ hours (plus an endgame), I don’t want to get ahead of myself. There’s quite the adventure here, after all.

A FIFA 23 World Cup mode appears to have been leaked