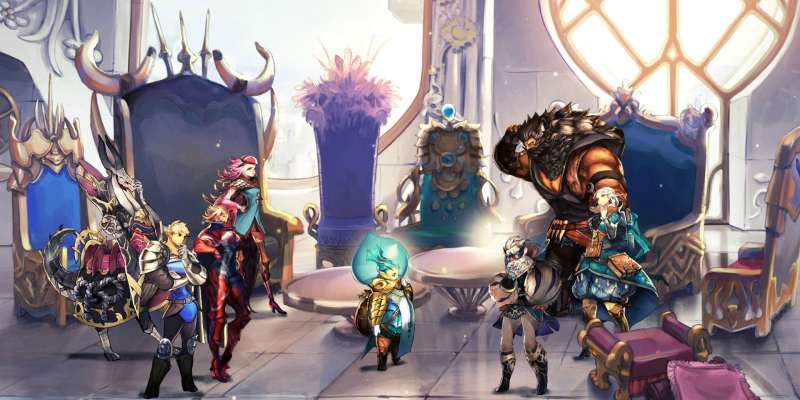 Story and progression are two very important factors in RPGs. When considering a journey that lasts for dozens of hours, you’d wonder if the whole adventure can keep you engaged. That brings us to Astria Ascending, a new game, made by Artisan Studio, that’s packed to the brim with content and various activities.

The French company is comprised of industry veterans, including those who worked on the Final Fantasy series. You’ll even notice a few similarities and borrowed concepts here and there. Unfortunately, it’s bogged down by having one of the most tedious campaigns in recent memory.

Astria Ascending takes place in the world of Orcanon. There are various races, such as your usual humans, the diminutive Peyska, and the leonine Arktan. Coexistence breeds tension in the capital of Harmonia. This fragile unity is threatened by the arrival of monsters called Noises — and here is where the demigods come in. Eight characters take center stage, chosen to fight back against the threat of the Noises. Due to their powers, demigods are only expected to live for a few years before they die.

True, there’s a bit of intrigue once you start Astria Ascending‘s campaign. But, this narrative begins to unravel within the first few hours. The campaign is constructed in such a way as to remove all doubt that you’re following an extremely linear path. 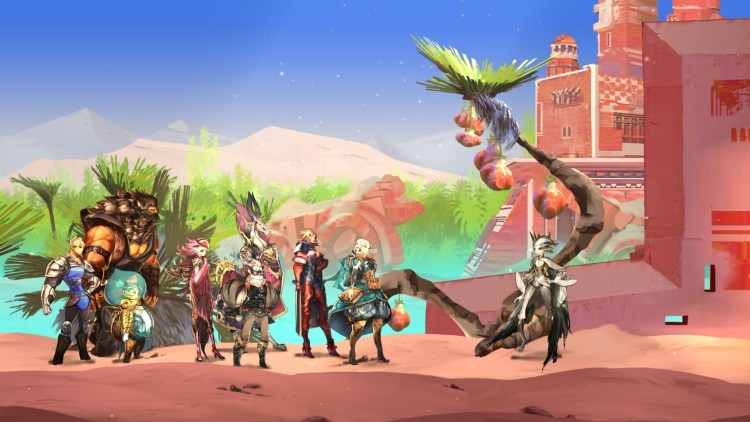 From the council room in Harmonia Tower, you’re told to visit an area to gain the power of a god. Next, you go to a temple in a swamp to defeat said god, letting you use it as a summon. You explore the remainder of the swamp temple, battling dozens of foes until you reach the final room. The group then returns to Harmonia Tower and the city’s ruler tells you to visit another location. These steps are repeated over and over for roughly two dozen hours. Then, during the final third of the game, things suddenly feel rushed.

It doesn’t help matters that characters, in typical genre fashion, have cheesy and hammy dialogue. Everyone talks about trying to restore Harmony like they’ve joined band camp. New NPCs are introduced, too, and they’re some of the blandest and most forgettable people you’d meet. Without spoiling too much, let’s just say that there are some who’d manage to wiggle their way into the plot to become important figures. Another downside, perhaps due to limited resources, is that a lot of enemies are reskinned versions of the ones that you’ve fought earlier in the game. 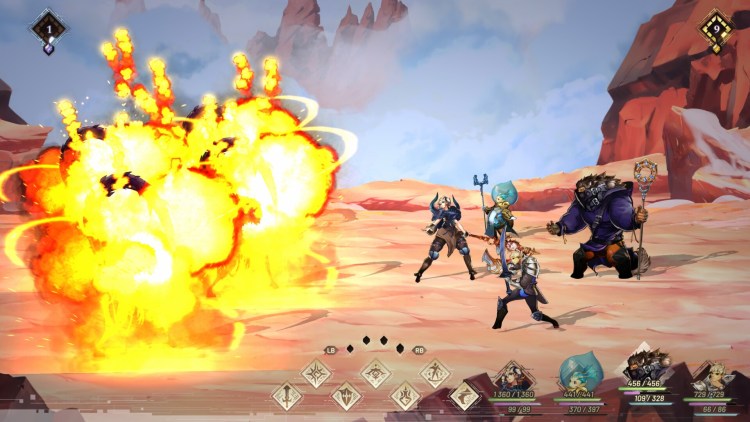 The job system and classes in Astria Ascending

Astria Ascending has turn-based battles. Although you have eight characters, only four are allowed to be in your party when fighting hostiles (but you can freely switch when needed). Characters take turns attacking, casting spells, and using items. There’s also an emphasis on using the elements. Some attacks are nullified or absorbed depending on the enemy’s elemental resistances. But, if you can land a hit with that mob’s weakness, you’ll gain Focus points to bolster your attacks.

Your eight characters start out with their base jobs (i.e., default classes). Eventually, you’ll get to choose from three possible main jobs. These classes provide new means of fine-tuning a character’s playstyle. For instance, Ulan is a Captain at the beginning, which means she’s able to defend her comrades. Among the main jobs you can choose are Harnesser (buffs), Black Mage (offensive magic), and Guardian (defense). The Guardian will likely be your pick here since it adds new abilities that can help protect teammates, block attacks, and counter foes. Later, you’ll acquire a sub job from one of the options you didn’t choose. There’s also another feature called a support job. But, I wasn’t able to find a single crest to unlock these even after finishing the campaign.

Anyway, each job in Astria Ascending has a rather nifty skill tree that slightly resembles a Sphere Grid. The skill points (SP) you earn are used to unlock abilities, stat boosts, and passives. Since you gain SP from beating foes, you’ll need to farm and grind so you have more than enough. Likewise, you have to consider which jobs to unlock perks for so as not to waste a lot of points early on. 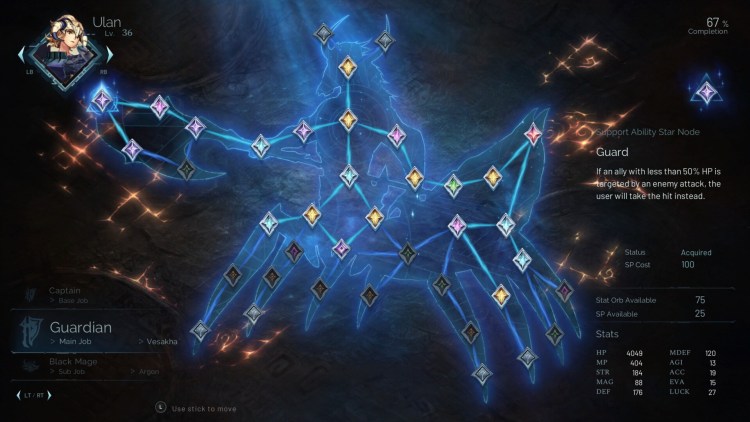 Characters left by the wayside

Although Astria Ascending gives you plenty of means to have an ideal character build, there are certain restrictions. You’re unable to change your class once you’ve chosen it, and you have no means to respec or refund skill points. Moreover, because characters have a default job and only three to choose from down the line, this can make or break their potential. A good example is how Dagmar and Eko begin the game as a Sorcerer and Scholar respectively. Dagmar can get additional elemental spells if you pick the Black Mage as a main job. Eko, meanwhile, can have new healing and buffing spells as a White Mage. Certain perks from their base jobs, such as MP Saver (mana cost reduction) and Blossom (mana restoration), synergize well with the skills you obtain later. In Dagmar’s case, he can grab Fierceness from the Sorcerer tree and Double Cast from the Black Mage tree. These will let him cast multiple offensive spells in succession in a single turn.

Eko and Dagmar can turn into powerhouses, so much so that they’ll become mainstays in your party. Of course, this means that there are some characters in Astria Ascending who will be left by the wayside because of limitations. There’s a character named Kress who starts the campaign as a Fencer. This default job entails using a physical attack followed by elemental magic. You might think that sounds cool. Sadly, the elemental and Focus system could mean that Kress’ physical damage gets nullified. She also lacks competent area-of-effect (AoE) abilities that can hit all foes. She does have her own main jobs (i.e., Guardian, Dark Knight, and Warrior), but other teammates can better fill these roles.

Then, there’s Alassia, an important fixture in your campaign, at least when it comes to the story. The Summoner Alassia is actually the one who can call on the deities to lend aid to your squad. It’s just too bad that this mechanic requires you to gather more Focus points, and the summons themselves aren’t particularly useful (again due to elemental combat). She’s completely trounced by Dagmar and Eko with their powerful builds. When you have useless characters, it’s hard to become invested even if they play a major role in the story. Imagine if Terra (Final Fantasy VI) or Yuna (Final Fantasy X) became afterthoughts. As an aside, I should mention that Cosmo Breaks (i.e., Limit Breaks) exist, but I’ve rarely activated these. 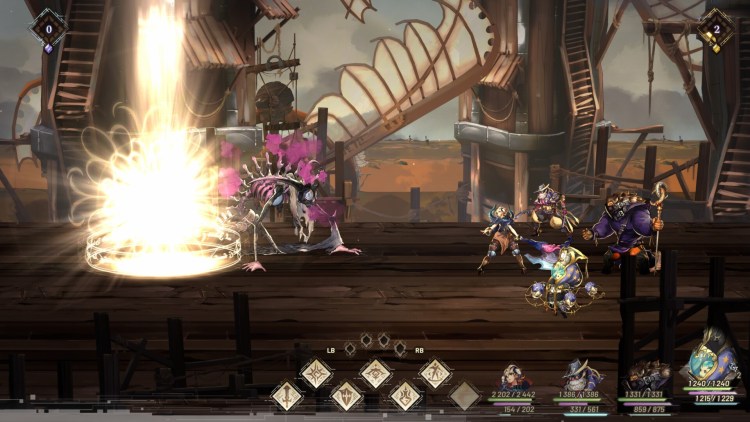 Is this a Metroidvania?

On the bright side, Astria Ascending has remarkable platforming mechanics. The dungeons in the game are platforming romps that slightly remind me of Valkyrie Profile. It’s also akin to Metroidvanias we’ve seen recently.

Ulan, who acts as the main character, can acquire Zodiac Ring powers to help the team explore. There’s one that can freeze enemies and activate switches. Another can blow a gust of wind to move obstacles. One could even create a statue that acts as a ledge. Some dungeons have puzzles for you to solve as well. 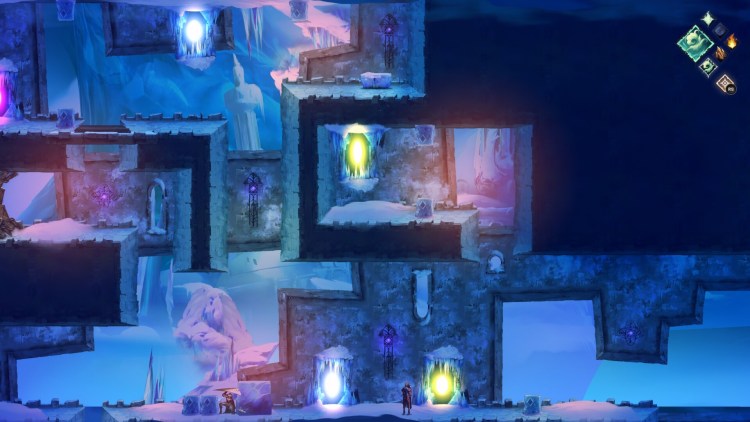 The level design is also top-notch, and locations feel varied and thematic. For instance, the Gemini Temple is situated in grasslands, with puzzles that involve pushing blocks to the correct spots. The Scorpio Temple, meanwhile, is a frozen cavern with doors that turn the room upside down. Then, there’s the Libra Temple that takes place inside gigantic windmills. You even use the air currents to glide and float past thorny traps. It’s possible to return to some areas once you obtain new Zodiac Ring powers to find more secrets.

Perhaps the only issue here is that the dungeon map system is atrocious. Instead of opting for a flat, 2D layout of the area, the game uses a 2.5D representation with overlapping layers. It can get extremely confusing since rooms appear as giant blocks without regard for obstacles or ledges therein. Then, when you enter doorways, you might realize that it’s connected to a room that’s further away. 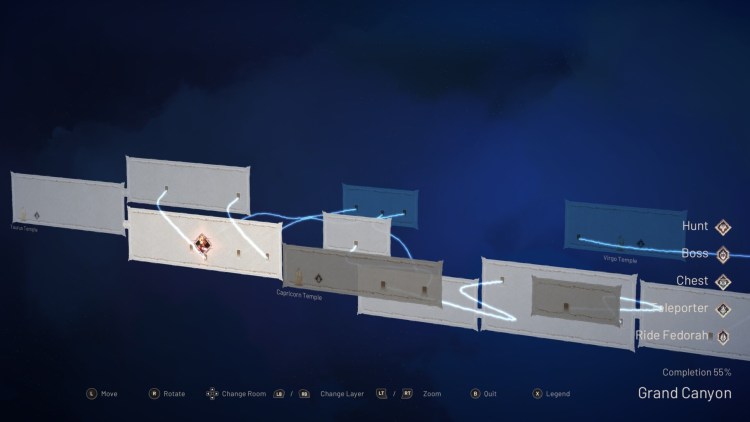 What else can you look forward to in Astria Ascending?

Astria Ascending feels like a “greatest hits” record of mechanics and tropes that we’ve come to know from past RPGs. While the narrative can seem middling and progression turns tedious, you can lose yourself in other activities to pass the time. One of the main fixtures is a card game known as J-Ster. It reminded me of Final Fantasy VIII‘s Triple Triad. You engage NPCs in card battles where each token you have has a certain value (i.e., stat point/power). These tokens are placed on a board and, depending on the rules, you can rotate these so that some sides can resist or nullify the effects of what your opponent plops down. You might as well start collecting some of the rarest cards. Just beware of the “Random” rule since it might pick those that have low values.

Apart from J-Ster, you can also conduct Hunts to find stronger monsters in the areas that you’ve visited. They tend to drop decent loot and a ton of experience points (XP). Likewise, you can defeat waves of mobs in an arena. There’s even a minigame where you control Fedorah, a flying creature, in a shoot ’em up. Finally, once you’re finished with the campaign, there’s a 10-floor dungeon known as the Time Rift which presents brutal challenges. 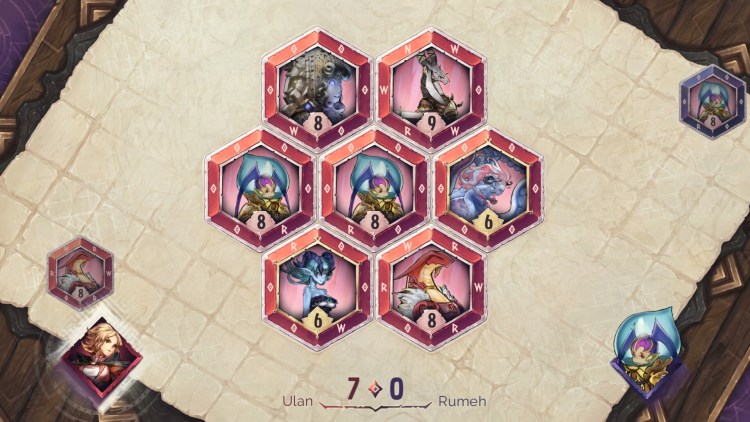 From a technical glance, I didn’t encounter too many issues with Astria Ascending. There were a couple of bugs, but they were minor. On top of that, the visuals were quite charming. Characters and enemies have a certain cartoony flair, but the hand-drawn designs, including those for environments, backgrounds, and special effects are fairly decent. As for controls, only a gamepad works as of the time of this writing. Mouse and keyboard controls will be implemented as part of a Day 1 patch.

In the end, you can expect to complete Astria Ascending‘s campaign in roughly 30 hours (not counting the grind for XP and SP). You can get more mileage if you wish to do the sidequests and discover all the secrets the game has to offer. The only thing that might put you off is the tiresome and repetitive campaign structure and grind. Some characters seem useless and, because you can’t speed up the animations during fights, you’ll likely go through the motions. 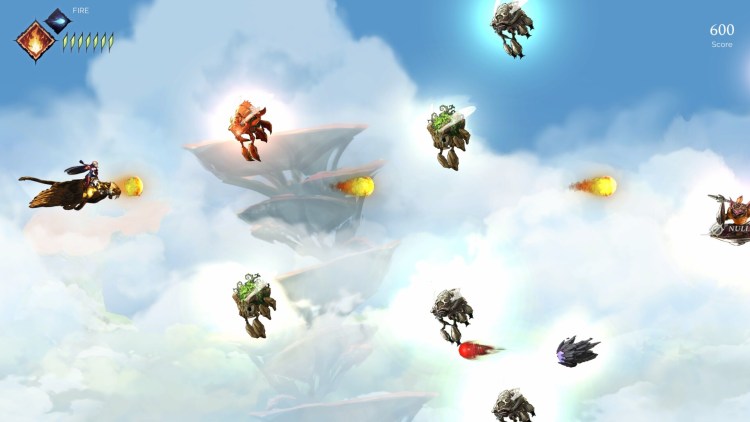 A JRPG made by veterans of the genre. You'll take control of eight demigods as they attempt to preserve Harmony.
8

Astria Ascending is filled with countless features and mechanics to add more flavor to an adventure that can last dozens of hours. However, it does have some noticeable issues that can sour the experience. The poor narrative and progression can become too tedious, and some characters will feel useless down the line.