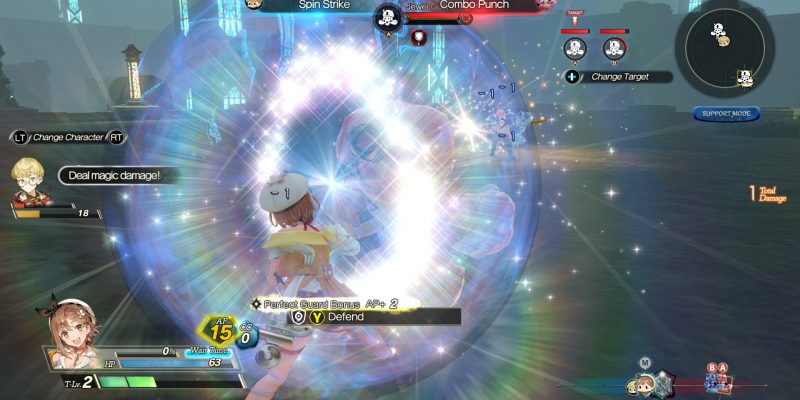 Atelier Ryza 2 combat is an awful lot like the first game’s. Therefore, I’m going to refresh your memory while also adding some new tips for the changes introduced here. You’re still going to be spamming skills and watching your companions pull off neat AP order attacks, though. Some things never change.

The first thing to note about Atelier Ryza 2 combat is that both your characters and their foes no longer stand in neat lines. Instead, they’re standing in wider areas where they can spread out from one another. This doesn’t make much difference early on when you’re only fighting one enemy at a time. But when you’ve got more to fight, your two AI-controlled companions will decide which one they want to attack. Obviously, you’ll want to have all three characters attacking one enemy at once in order to reduce their numbers ASAP. But due to the new layout, it can be confusing to get all three characters attacking the same foe.

You could do this by observing the field itself, sure. But the best way is simply to look in the upper-right-hand corner. There you’ll find enemy icons with A, B, and C on them, indicating which foe you’re targeting. Instead of trying to parse the visual information, simply pick one of the three to fight, switch between your characters, and then target the one you want to dispatch first. Now that you’re actually on the same page and whittling the enemy’s health down, there are some things to note. 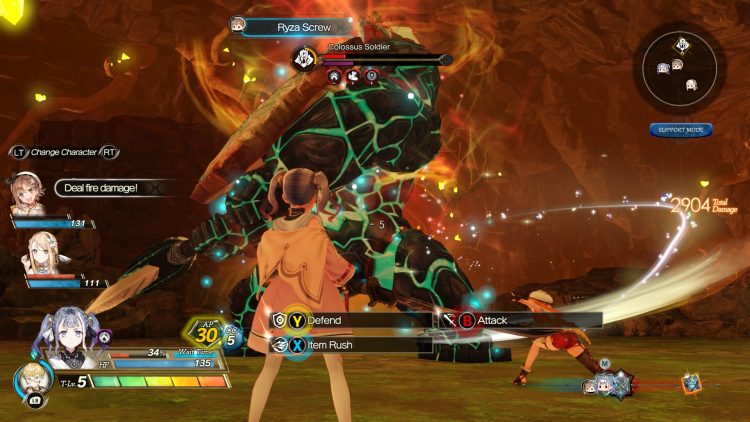 Regular attacks cost nothing to use. Whenever a character in Atelier Ryza 2 is in play, the wait bar will fill up. Once it’s filled, your character will be able to attack, use core items, or use skills. Landing a regular attack will generate AP for you to use. Fights start out at level one on the tactics bar. This bar will increase as the fight goes on. While at level one tactics, you can only have a max of 10 AP for your entire party. I suggest having it so that your AI companions don’t use AP, especially since they’ll likely waste it.

You’ll notice that you can defend against enemy attacks in Atelier Ryza 2. You can press and hold the defend button and your character will keep their guard up. Enemies attack with mostly the same rules as your party and have to fill up their waiting gauge which is displayed via a circle next to their character model. If you defend a second or two before the enemy attack hits, you’ll execute a perfect guard and gain an AP bonus for doing so.

Regular attacks in Atelier Ryza 2 obviously aren’t as good as attack skills, but you should always use them. After you input enough button presses for your character to use three regular attacks (which is the maximum amount of those) you can then chain that into skills. Always use regular attacks prior to utilizing skills, because that will grant you more AP than simply using the skill by itself. At higher tactics levels, you’ll want to not only chain regular attacks and skills together but skills themselves. If you’ve got the AP for it, you can pull off a bunch of skills in a row. The more skills you chain, the more of a damage bonus multiplier you’ll receive. Each successive skill adds 10% damage, meaning that saving your AP will allow you to do more damage overall. Also, your two allies will sometimes tell you to do certain kinds of damage. Doing so will cause them to use an AP order, which can either be an attack or support skill that will come in very handy. 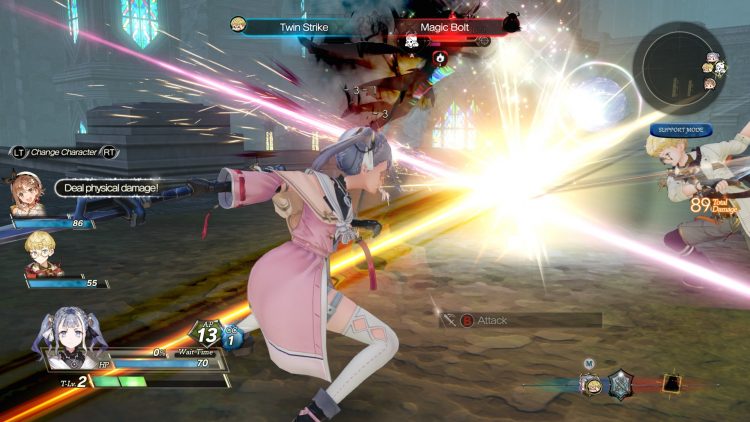 I’m about to break

Both your party members and their enemies have break gauges. As anything takes damage, this gauge will fill up. If it fills up, then the broken character will be defenseless and incapable of doing anything until the gauge empties. Keep in mind, though, that certain items (such as dry biscuits) can heal both health and break damage. Allowing a character to break can make things tougher on you, so consider having some break healing on hand.

Breaks are important for another reason, though. Unlike your characters, certain enemies can charge up powerful attacks. These can’t be blocked and you’ll need to put the charging enemy into a broken state or kill them before they finish charging if you want to avoid the damage. There will be plenty of times that you can’t stop one of these charged attacks from going through. If that happens, heal so that your characters are more likely to survive or not get broken by the attack.

If you want to squeeze a bit more damage out of your party in Atelier Ryza 2, keep an eye on your supporting member. You can have one additional member on standby and can swap them out for whoever you’re currently controlling. This has more than one use. You can use it to get some more regular hits in. Or, if you’re a bit short on AP, you can switch to them to kick your AP up a bit more and then hit your foe with specials. More importantly, if a character is about to fall in battle and you don’t have time (or the desire) to heal them, you can swap to your standby member and keep going without missing a step. 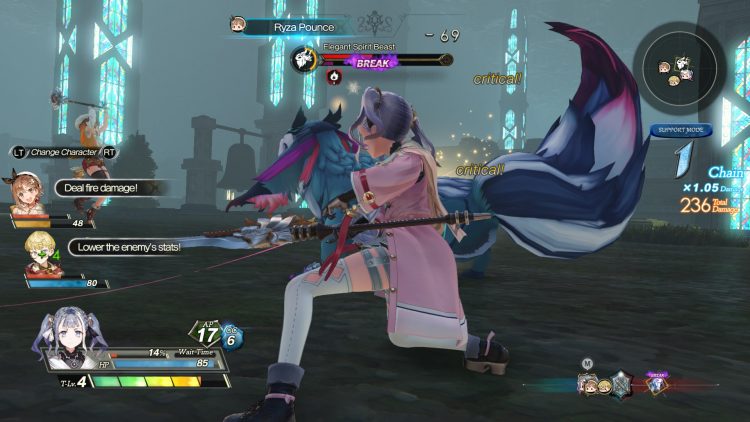 Core items are a sometimes thing

You can equip core items to characters in Atelier Ryza 2, which are usually of the healing or damage variety. In order to use a core item, you’ll need to have core charges during battle. Much like the tactics level, you can only increase this by fighting. The number on your core indicator will tell you how many core items you can use. If you have zero, then you can’t use anything. Core items can either be used in place of an attack during a character’s turn or you can spend 10 AP if it’s an emergency and go right to them whenever you want. Naturally, that’s fairly pricey, so it’s better to use them when they don’t cost any AP.

That’s it for the combat in Atelier Ryza 2. As long as you bear this guide in mind, you’ll rarely be caught off-guard.