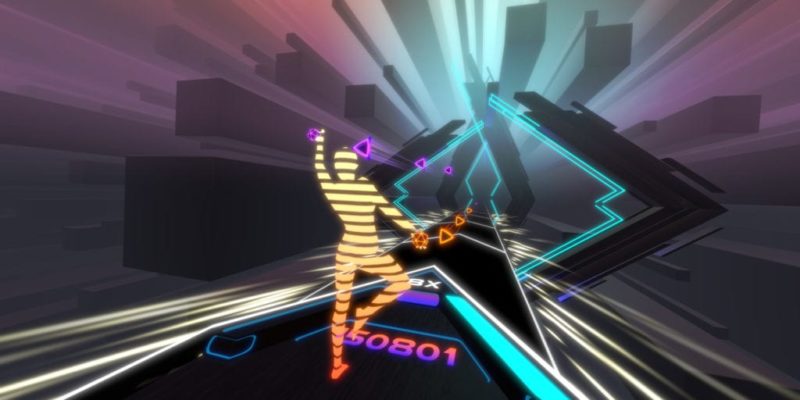 There is a certain magic that only music-based VR games are capable of producing. There’s no shortage of games in this niche. Beat Saber, Audio Shield, and Sound Boxing all come to mind. But that hasn’t stopped Kinemotik Studios from throwing its hat in the ring with Audio Trip.

The immersion these games can produce is second to none at making you feel directly responsible for your success. The addition of music timed to all your actions gives you the recipe for an enthralling experience.

Each time a new game has come with a unique twist. Audio Shield had you bashing notes like a Spartan warrior. Beat Saber put the weapon of a Jedi in your hands. Sound Boxing lets you punch sound like the badass you are. Audio Trip‘s hook is the art of the dance.

The core gameplay here is simple, as you would expect. Each hand has a different color, coded to corresponding notes. There are three types of notes for you to hit. The first just requires you to touch it with the correct color. The next type acts as a drum and requires you to hit the note in a particular direction. Last is a trail, which challenges you to keep your hand inside the stream.

These core mechanics are simple enough for anyone to grasp them within the 30 or so seconds the tutorial takes. In theory, they should make for a workable, if boilerplate, music VR game.

Unfortunately, Audio Trip suffers from an abrupt difficulty curve. It’s not a unique problem; Beat Saber has a very similar issue. The issue is that the easiest difficulty is generally too easy to be fun, while everything beyond that is for crazy people. Unlike Beat Saber, however, Audio Trip‘s harder difficulties aren’t something most people are going to be naturally good at.

In the highest difficulties of both Beat Saber and Audio Trip, notes tend to come at you faster than you can consciously perceive. In Beat Saber, this is manageable because, in general, your next move is intuitive. If you hit a down note, chances are the next note is an upward one. The game rewards you for going with your instinct and going with the flow of the chart.

Beat Trip, on the other hand, has opted to simply throw as many notes at you as possible. At times it becomes literally impossible to see what the next note is, and it remains difficult to intuit naturally. The result is dramatically less fun.

This problem is compounded by the finicky hit detection for the notes. The hitbox for your controller is at the end of your hand instead of at the center. It’s only a matter of inches, but when notes are coming at both sides of the periphery of your vision, it makes it a tad bit impossible to do well without a lot of practice.

Once more with feeling

The game also demands a frankly absurd amount of VR space. The movement cues in Audio Trip, directed by walls that cannot be touched lest you break your combo or fail, have you making huge steps to either side. I’m guessing this is to involve your feet more, thus invoking the image of dancing. But above the easiest option, the pace is so frantic that anything done here is more akin to a wounded animal flailing.

Am I having fun?

That may sound like more of condemnation on my dance skills or ability to play this game, but hear me out. VR owners make up a fairly small fraction of people who play games. The VR players who enjoy these music games are a smaller fraction of that fraction.

Now take that fraction of a fraction and split it again to get the people who are actually good enough at these games to engage at the higher levels. Split it again for those who have a big enough VR space to move around freely. That’s not a lot of people in the grand scheme of things.

Even if you are one of those fractional people, there is very little to recommend here that isn’t better elsewhere. I like to think of myself as being above average at this type of game. I generally play on the second hardest Beat Saber difficulty. Heck, I modded Audio Shield to be more frantic and involved. I really love this style of game, so believe me, it brings me no joy to say that Audio Trip is no fun.

One of the few things this game boasts is licensed music from top artists. Those top artists include Lady Gaga, Skrillex, DeadMau5, and someone called Zedd. The only songs I recognized were Just Dance by Lady Gaga, and Bangarang by Skrillex. Both of these seem like strangely old songs to license, with the first coming out in 2009 and the second in 2012. I mean, I get it, songs are expensive to license. But still, using 11-year-old songs to claim that you’ve got “top artists” is at least a little misleading.

The way the menu is handled is also bizarre. Instead of the defacto laser-from-your-hand method used by basically everything else, Audio Trip opts for the more hands-on approach. Meaning you literally have to put your hand on the menu to pick songs, scroll the list, pick your difficulty, and start each session. It’s a small thing to harp on, but good lord is it needless and annoying.

“What if we made them have to actually push the buttons?” – Guy with no good ideas to contribute.

I don’t want to be all negative though. One of the nicest features Audio Trip adds to the formula is the Short Trip toggle. This lets you drop into any of the songs around the halfway point. This bypasses any slow lead-ins and brings you right into the most challenging and fun parts of each song. It’s a genuinely good feature that I hope better games adopt.

Right now, there is little to no reason for anyone to pick up Audio Trip. The game is more of a tech demo than anything else at this point. There are only 10 songs in the batch, with 20 promised by release. The lack of a global leaderboard, which is promised to be coming soon, basically kills the game for the only people dedicated enough to really care.

They may get every issue I have with the game fixed by release, but even then, why? Why would you bother with this one when there are much more feature-rich games out at the same price point? Do yourself a favor and get any of the other games I mentioned instead.