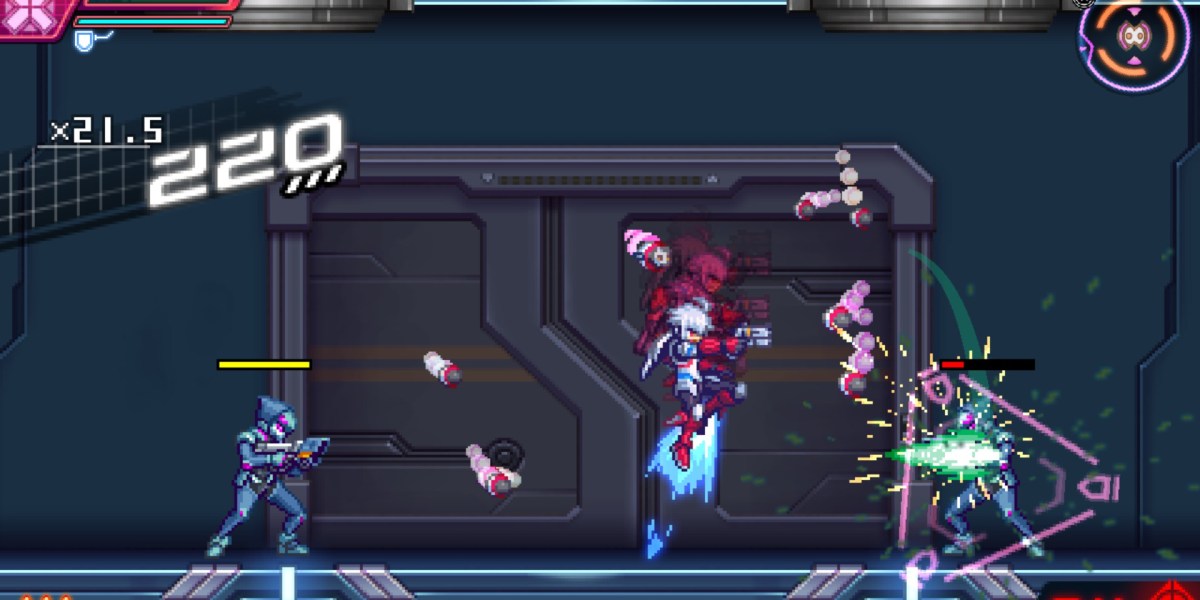 It’s taken a surprisingly long time for Azure Striker Gunvolt 2 to come to PC. The first game in the series came out a year after its initial 3DS release, but this one took nearly four years for whatever reason. Thankfully, after all this time, it’s still flashy, frantic fun that’s well worth playing. Although you’ll almost certainly want to play the first one beforehand.

What on earth is happening?

I, however, did not play the first one before jumping into Azure Striker Gunvolt 2. And I’ll tell ya, that wasn’t a great choice. The game tells the story of a group of people called Adepts, who use Septimas to gain super powers. Or something. One of the main protagonists, Gunvolt, is one such Adept who is aided by the . . .er . . . digital ghost of some girl that gives him extra powers but maybe not? And there’s another protagonist named Copen who has very similar powers but isn’t an Adept. But he’s got a little sister who’s related to the digital ghost in some way and he hates Adepts and is also a scientist and I -. No. Nevermind.

The primary plot of the game focuses on Gunvolt and Copen fighting an organization called Eden, which I suppose is a group of Adepts vying for superiority over regular humans. The leader of Eden, Zonda, first introduces themselves as a man, who then jumps into a mirror and returns as a woman, and finally reveals themselves to have actually been a little girl the entire time. I think I just got an anime bingo. Zonda has broken Gunvolt’s digital ghost friend into shards and divvied them up among their seven subordinates, and it’s up to whichever of the two characters you’re playing as to get them back. 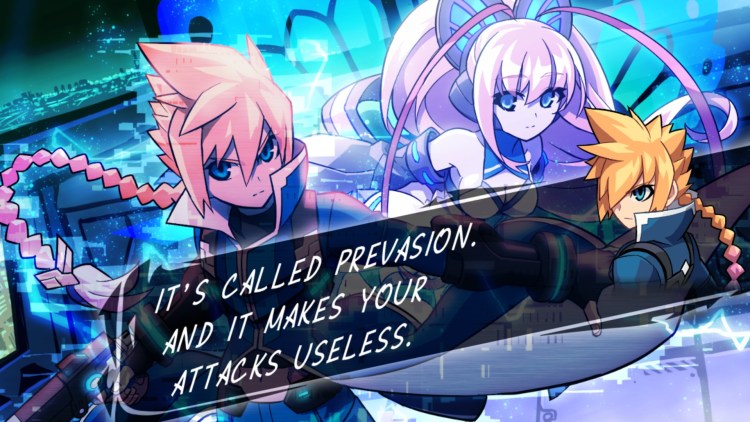 Suffice to say, I had very little idea of what was happening or what most of this meant. There’s a lot of talking, which is all fully voiced in Japanese. At its core, it isn’t too hard to follow as long as you squint and pretend you’re playing a Mega Man game. There’s an evil so-and-so with a bunch of people in their organization, and you pick levels to fight them before going and getting the big bad. It might be enjoyable for the initiated but, man. I should have played the first game.

Gotta get outta the way

The structure of Azure Striker Gunvolt 2 is much easier to explain. Gunvolt 2 starts with a two-pronged prologue where you play as Gunvolt for one part and then Copen for the other. Once you finish these, you then pick one of them to play as and hop into their levels. At first, each has four levels available. They share one of these, but the other three are unique to their playthroughs (for a while, at least) and are designed around each character’s unique abilities. Once you complete these four stages, you then go and do three fortress stages that culminates in a boss rush and the final battle with Zonda.

But wait, there’s more! To get the true ending in Azure Striker Gunvolt 2, you’ll need to beat both stories and then do the last level again as each character, at which point you’ll be able to fight the real last boss and see each character’s ending. This was one of the few things I didn’t like about the game, as you have to play through that last level four times all for two more boss fight and the endings. 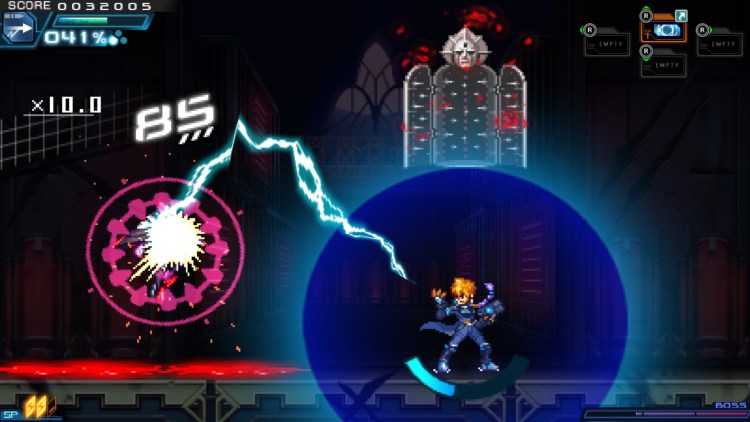 Each character’s story doesn’t take more than two-to-three hours to get through each, so this isn’t a particularly long game however you shake it. But getting the true ending with each character will allow them to play the other’s prologue stage and three unique stages, plus a special boss rush. There are also a large amount of challenges for each character that will net them items they can use to synthesize new equipment.

While Azure Striker Gunvolt 2‘s structure and general movement echo that of many Mega Man games, combat is quite different. Gunvolt and Copen share similar abilities that allow them to dodge any incoming attacks as long as they have a certain amount of resources. They both also plant tracers on their enemies, which allows them to do a large amount of damage, but the ways they both go about this are practically opposites.

Gunvolt comes equipped with a dart gun that can plant three tracer darts in enemies. These darts do a very small amount of damage, however. Most of his offense comes from his flashfield, which channels an electric current into the darts upping the damage output. The number of darts he has can be increased or reduced with items, plus defeating bosses gains him new types of darts that can pass through enemies when charged, let off a sharp burst of shots, or various other options. 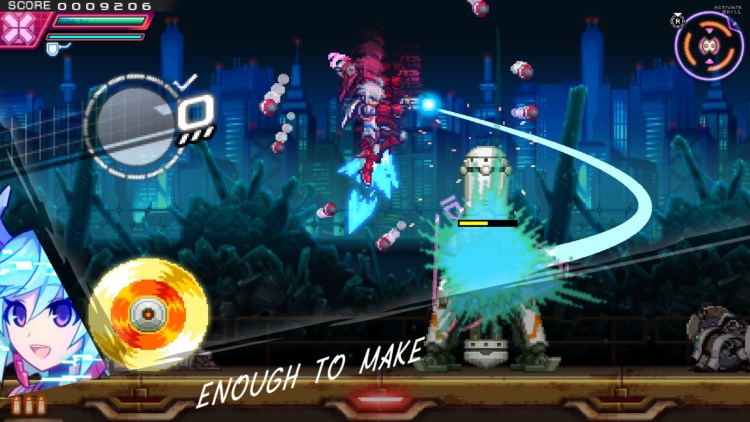 This is dictated by his energy bar which depletes as he dodges damage and uses his flashfield. If it empties, it overheats and he takes all damage to the face. He also can have four special attacks equipped at once that use SP that slowly refills itself as you damage foes. He’s a fun character to use, and the ideas behind him are novel. But there’s a problem. And that problem’s name is Copen.

Just as X became overshadowed by Zero, Gunvolt is totally outclassed by Copen. Copen is more mobile, much more damaging, and just generally safer to play. Azure Striker Gunvolt 2 isn’t particularly difficult while playing as the titular character, but it’s typically easy while playing as his counterpart. Whenever Gunvolt uses his flashfield, his Prevasion (a passive ability for charging energy) doesn’t work. But his flashfield is his major means of attack. Copen can use Prevasion as long as he has bullets, which he can recharge by pressing down twice, just like refilling Gunvolt’s power.

But Copen has a gun that’s an actual weapon as opposed to tracer darts. And he has EX attacks tied to a bar that quickly refills that he can use very frequently. On top of that, he can also put tracers on enemies. But he does this by dashing into them and then unleashing a lock-on barrage that does a lot of damage. Gunvolt just doesn’t stand much of a chance against him. 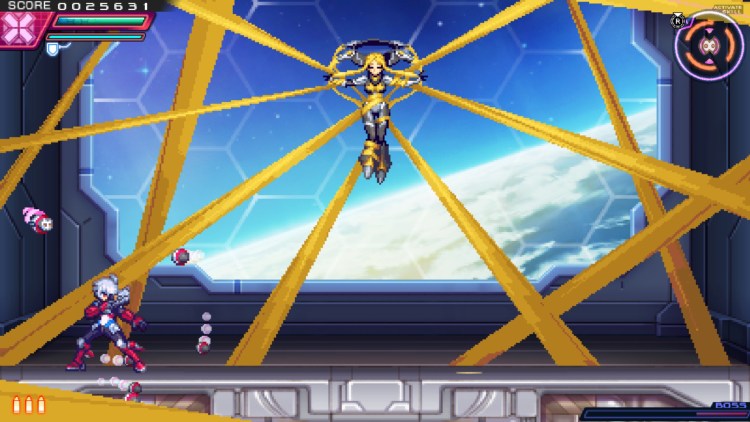 For instance, the boss battle before the true ending fights is identical for both of them. For Gunvolt, it’s a tedious slog against an enemy that routinely calls forth a shield and attempts to heal itself. For Copen, it’s a cakewalk that takes barely any effort. The same is true for practically all of the bosses. Copen can also dash in mid-air (which Gunvolt can also technically do with a synthed piece of equipment) and rocket himself upward in tight spaces. He’s simply better in every way, so it’s no wonder that the next game in the series focused on him and not Gunvolt.

No reason to dodge this one

It’s certainly not a knock against Azure Striker Gunvolt 2 that one character is so much better than the other. When all is said and done, this is an extremely entertaining game with tight, frenetic gameplay and a healthy host of combat options. As this is a port of a 3DS game, it runs very well, aside from some surprising slowdown when Copen does his downward slam reload.

There’s a whole lot to like here even if the game is short. But it’s got a lot of replay value due to challenges and additional modes, such as a speedrun mode that takes Prevasion away. Fans of 2D action platformers shouldn’t miss out on this series if they’ve avoided it so far. Just try and play the original first. Trust me on this one. 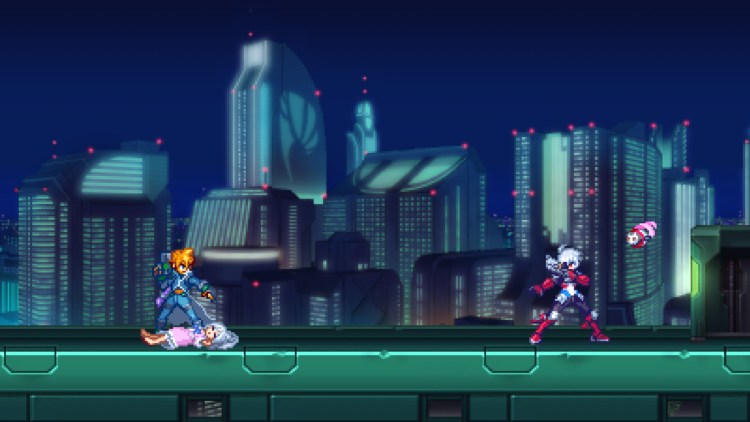 Microsoft to shut down Mixer, will transition streamers to Facebook Gaming [Update]