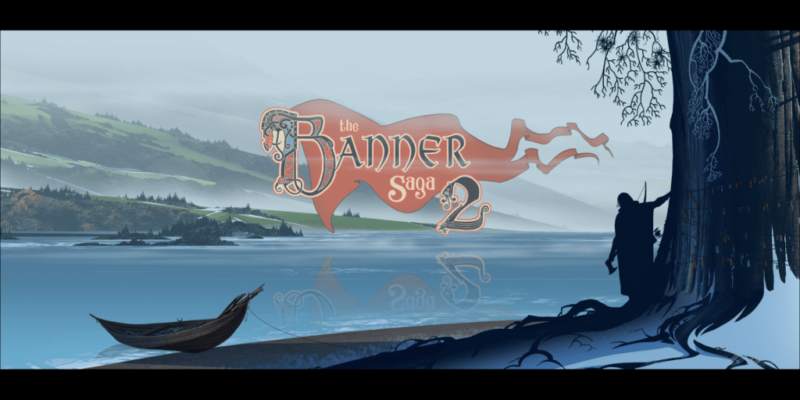 People who like to play and replay character-centric titles to arrange the ‘perfect’ storyline may be pushed beyond the brink of sanity by The Banner Saga 2. As the first chapters of the decision-heavy game made abundantly clear, things can, will, and must go wrong at every possible turn. Even the choices that end up beneficial will often test your resolve by at first seeming hopeless. An unremarkable interaction made earlier in the journey can sometimes nudge your caravan of hardy fantasy-Nordic souls towards catastrophe, and no-win situations can occasionally (very occasionally) turn out in your favour.

In most instances these consequences stay the right side of sadistic, punishing you only for actions that, in retrospect, probably were unwise for the given situation. But the world of The Banner Saga 2 is in the grip of apocalyptic events, so it’s healthiest to accept that some losses (of both named characters and generic members of your travelling clan) are going to occur no matter what you do. Sometimes, the game is just going to twist the knife. Best to grimace and bear it, rather than reaching for an older save to reload. 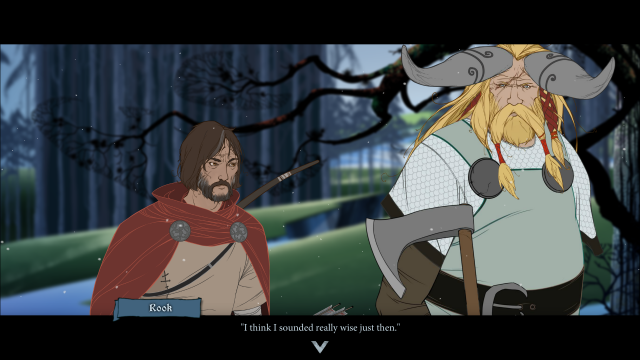 The Banner Saga 2 picks up almost immediately after the events of the first game, placing you back in control of your rag-tag troupe of Varls, menders, clansmen, and assorted heroes, and placing you back on the road, marching away from the tireless Dredge. It’s very much a ‘Part Two’ rather than a stand-alone videogame sequel, so unless you’ve finished the original Banner Saga very little of it will make sense.

The first game was admirably restrained with the pacing of its exposition, allowing players to absorb the world through context and character interactions, and this second set of chapters assumes you’ve retained much of that knowledge. There’s a brief recap video accessible through the main menu, and periodic sentences like “this guy has been with you since Location X, he’s important because …” appear to prompt your memory, but not a great deal beyond that. Even this title’s tutorial is fairly short, giving it the air of a refresher course rather than a full lesson. The message is pretty clear: playing The Banner Saga 2 without knowledge of the first part is at your own risk.

In-keeping with that approach, it’s possible to import a save from The Banner Saga right into this game. As well as recalling who’s alive or dead in your story, an imported save will transfer the number of clansmen, fighters and so on who survived at the conclusion of the first game. You’ll also have all the magic items, renown, and number of supplies you finished up with. In my case that turned out to be not all that many clansmen or fighters (compared to a ‘default’ start), but far more renown (used, again, for levelling up and currency) and food. Apparently my actions in the opening chapters had been suitably notorious and resource-rich, but a bit on the dangerous side. 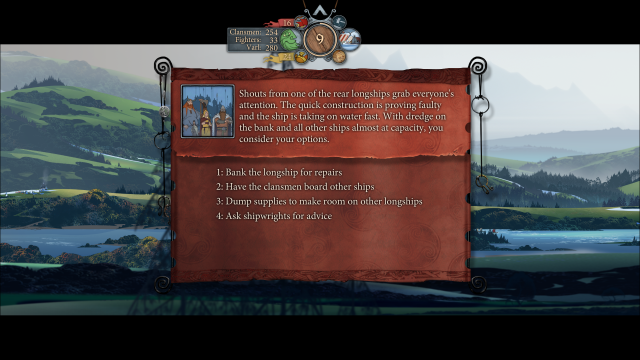 5: Abdicate command as you huff your anxiety into a paper bag.

If you don’t have an end-game save from last time, you’ll start with a selection of magic items and heroes that were levelled in broadly the same range (between five and three) as those in my imported party. It’ll also be up to you to select which of two main characters survived The Banner Saga’s climatic battle, and will continue leading the clans towards, ideally, safety.

The next step of the caravan’s journey is the lengthy road (and, as it happens, river) to the capital of Arberrang. Needless to say, this won’t be at all simple, and as you get closer to the destination, realisation dawns that pretty much everyone is migrating there. So even if you do make it, you’ll be walking into a major refugee crisis. The Banner Saga 2 continues to pursue the themes of displacement initiated by the first game, and the narrative further explores the idea that the Dredge are sweeping across human and Varl lands not out of conquest, but pushed by fear. Everyone, it seems, has the end of the world at their backs.

That rumbling doom chases you all the way through the game’s 12-15 hour running time, and quickly splinters your main group; sending a separate party (which you revisit and play in alternating chapters) on a different quest altogether. 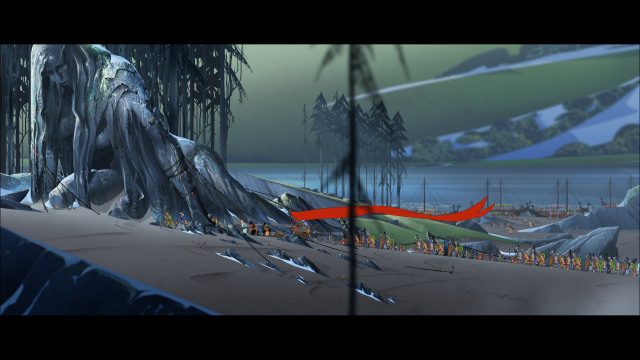 This statue caught a glimpse of itself and collapsed in recognition of how great it looks.

As you’d expect from a direct continuation of the prior game, travel across this faltering land consists of the same sequence of camping (and resupplying), text-based dialogues and decisions, and periodic turn-based battles. Once again, Stoic’s art design (the Eyvind Earle-inspired landscapes in particular) is spectacular. The visual and aural harmony of the title’s majestic vistas and Scandinavian soundtrack – austere ambience channeled through mythic war horns – evoke a beautiful, haunted realm.

New additions to the structure are largely at the peripheries of familiar actions. It’s now possible to convert clansmen (who will scavenge and hunt for additional food on the road) to fighters (necessary for protecting the former in larger, pitched-battle events) at a training camp that pops up during certain moments of rest. That same trainer offers a sequence of set-piece scenarios designed to refresh your memory on how specific units can support one another, and teach players how best to use some of the new talents. Completing these also grants additional renown, which is an always handy bonus when you want to level a character up or purchase more supplies for the road.

Named individuals in your party who have maximised a given stat can now put points into additional passive skills. If Armour is at its highest level, for example, the character can be further protected by a percentage chance to avoid armour-based damage altogether, or the possibility of regenerating armour points each turn. 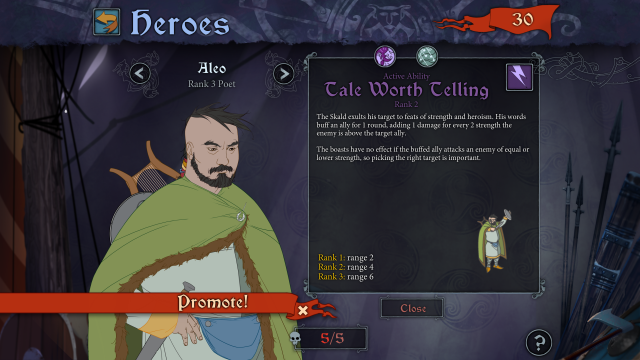 This guy can be pretty handy, as can the chap whose ‘insult’ ability can make units miss turns.

These additional talents and unit types (not just for your party; the Dredge have some new forces, and there are some entirely new factions as well) expand the vocabulary of The Banner Saga 2’s combat encounters, but they don’t re-write its language. Stoic have committed to their central battle mechanics, so they remain otherwise identical to The Banner Saga. Turns still alternate between player and AI units until one side is down to a lone soldier, and the system of health being the same as attack power (protected by an armour stat) is still the same as well.

That means the slightly odd tactic of maiming (but not actually killing) enemy units, in order to make them waste an ineffectual turn with their now reduced health/strength, is still in effect. Though there is now slightly more emphasis on specialist skills and enemies who you’ll want to end quickly no matter what. While the combat system remains imperfect, it’s sufficiently engaging, and deserves credit for attempting (and now sticking with) something new rather than copy-pasting an XCOM system on top of fantasy Vikings.

Just as before, the combat situations in The Banner Saga 2 are extremely punishing. Although not every battle has to be won, failing too many in a row can send you into a doom-spiral of wounded, under-levelled characters. When you run into a critical (and unavoidable) fight in this state it can be close to impossible, tacitly encouraging players to reload and replay lost battles that the game (ostensibly, at least) wants people to roll with. It doesn’t help that, once again, characters you’ve lovingly spent loads of renown points on can take off for plot reasons at the worst possible moments.

The ability to switch to a lowered difficulty at any point in the game lessens these problems a little (and that’s something I absolutely took advantage of to get this game finished in time for review), but it’s an imperfect solution.

Aw man, bears? I don’t want to have to kill bears.

With an ever-increasing cast list of named characters, the impact of deaths in The Banner Saga 2 can sometimes feel diminished. An early loss barely registered with me, because I struggled to even recall when I’d met that particular character. In contrast though, a later demise had me grappling with the temptation to join the unholy legion of save-scummers. The series still knows how to make a death in your party hurt, especially when it comes as a direct result of your own lousy decision-making or failure to heed clear warnings.

There are times where that isn’t the case, and there’s a fairly pivotal scene where the game, perhaps for time or budgetary reasons, only really depicts the aftermath. As well as pushing the story into unfortunate ‘tell don’t show’ territory (the opposite of what you want), it feels a little unfair to be dealing with the fall-out from an event you didn’t really see, and had no influence upon. The series is no stranger to the concept of “bad things out of your control just happen sometimes”, but in this case the transition from event to aftermath is so jarring that it feels like some of the decision boxes (even if they were of the ‘no win’ type) simply went missing.

That’s a rare blemish on a narrative that’s going to some increasingly cosmic and metaphysical places but, so far at least, hasn’t lost its emphasis on human (or humanoid) adversity, tribalism, and diplomacy. 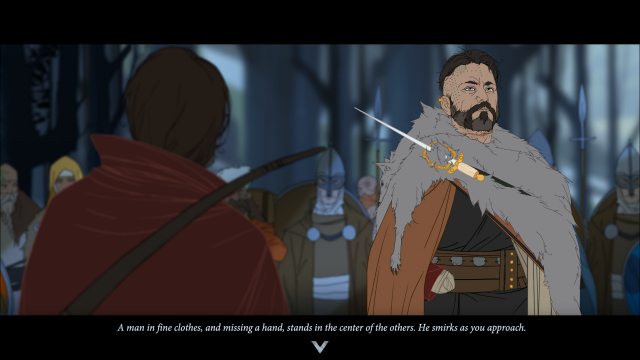 The Banner Saga 2 is a natural continuation of the first release, which brings pretty clear advantages and setbacks. It’s terrific that a resumed save really does start you off where your journey concluded last time, applying all of your decisions (both narrative and mechanical) and recalling how many supplies your caravan carries with it. Re-orienting yourself with your preferred party composition and strategies can take a little while, but that’s a fair trade for a save-transfer that goes much further than a basic “okay, who survived from the last game?” check. The same art and sound teams who brought such splendour to the first Banner Saga return too, painting new destinations with brush and instrument alike.

But it means the flaws evident in some parts of the game’s structure return as well. The battle system brought divided opinion on release, and the added abilities, skills and units are unlikely to radically alter anybody’s views. Like its predecessor, The Banner Saga 2 expects you to roll with the punches you receive both in and out of combat, but while it’s possible (and satisfying) to take the narrative blows on the chin, persisting through too many lost fights just sends your clan hurtling toward a road-block and a restart. Re-loading after a story beat always feels a little cheap, but doing it for battles is practically mandatory.

Despite some missed opportunities for refinement, the moment-to-moment text decisions, their consequences, and the impact on the game’s ongoing story continue to impress. Arduous they may be, but it still feels good to be back out on The Banner Saga’s gorgeous trails.