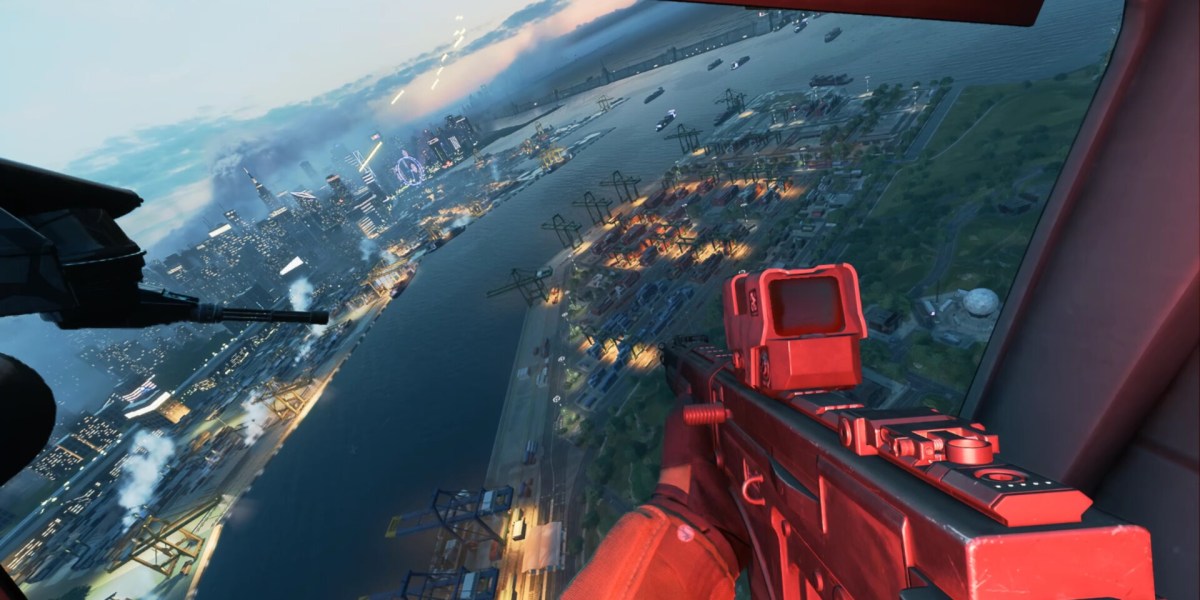 As a franchise, Battlefield feels as though it has lost its identity over the last eight years. The glory days of Battlefield 4 seem so long gone, with newer entries failing to offer the same fun-filled experience. Battlefield 2042 marks the franchise’s first return to the modern era since Battlefield 4. Although, whether it lives up to the standards of the classics is up for debate.

Some players are enjoying it while others are frustrated with its issues. Many websites that got pre-release review codes lauded it, but outraged Reddit users seem to think that this is the worst Battlefield ever made. As usual, the reality lies somewhere in between.

Battlefield 2042 abandons a lot of the established aspects of past Battlefield titles. Most notably, the class system is gone and has been replaced by specialists: playable characters in Battlefield who have their own abilities and gadgets exclusive to each of them. An example of one of these specialists is Webster Mackay, a Canadian soldier who can reposition quickly with his grappling hook. Another is Navin Rao, an Indian soldier who can hack enemy vehicles, temporarily disabling their weapons and defenses. As of launch, there are 10 specialists in total. 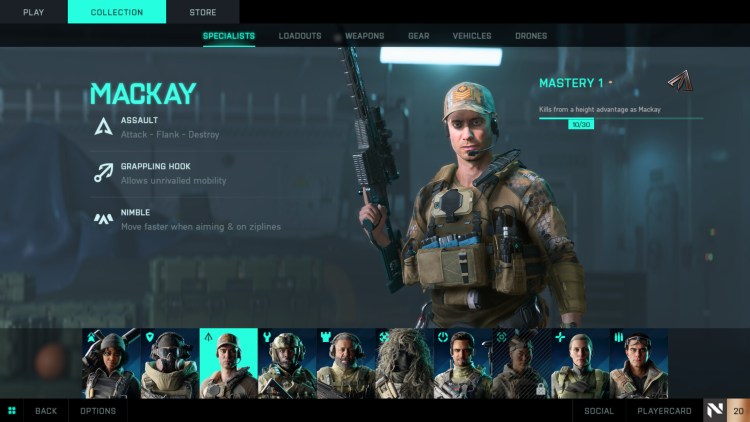 A lot of players aren’t happy with the traditional class system being replaced. And to be honest, I had the exact same reaction when I first started playing. However, as I have worked through the levels and experimented around, I’ve started to enjoy the specialists more than expected.

They do a fantastic job of facilitating those iconic “only in Battlefield” moments that DICE is so proud of. Being able to grapple up to a crane and then blast a whole squad camping up there feels exhilarating. Sundance’s wingsuit is particularly fun. I had one moment where I swooped down off of a skyscraper and dropped C4 mid-flight onto the helicopter hovering below. This system isn’t perfect, as I believe the loss of traditional roles hurts teamwork, but the potential of the magnificent plays that come from the specialists largely make up for that.

There aren’t many official game modes available in Battlefield 2042. There are two main modes alongside the community-driven Battlefield Portal. As a side note, there is no single-player or campaign. This doesn’t bother me, as I think Battlefield campaigns mostly suck, but it could be a deal-breaker for some. As for the game modes, the first is All-out Warfare which is made up of Conquest and Breakthrough. Conquest is the classic Battlefield mode where players have to capture areas across a large-scale map. 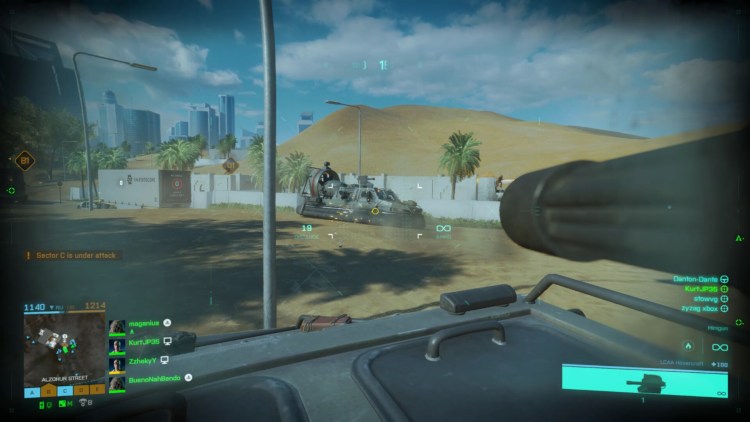 Breakthrough is effectively a variant of Rush but scaled up. The attacking team has to infiltrate objectives defended by the other team. Although, rather than planting bombs like in Rush, the attackers are tasked with capturing zones similar to Conquest. Breakthrough featured in both Battlefield 1 and 5 and has served as a decent addition to the franchise.

As of launch, Battlefield 2042 has no official playlist for Conquest Small, Air Superiority, Domination, Gun Master, or even Team Deathmatch. Technically, these can be played through the Portal, although this alternative has its problems.

Battlefield Portal is a great idea in principle. It allows the community to create its own game modes based on the content that is available. DICE itself has even put together some nostalgia-driven playlists within the Portal that aim to recreate fan-favorite game modes from past titles, like Battlefield 3‘s Conquest and Bad Company 2‘s Rush. 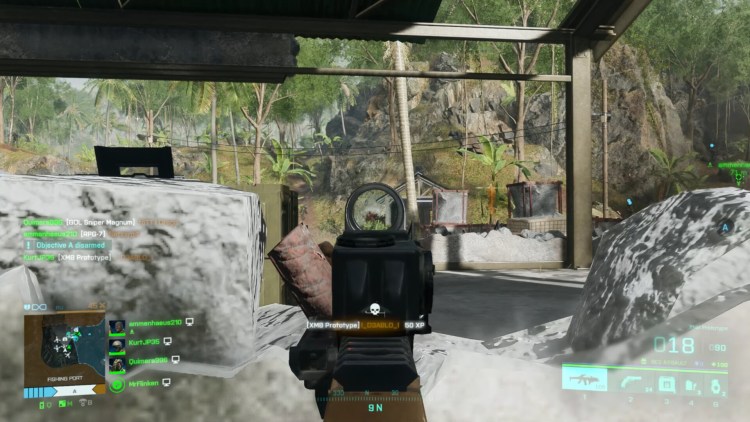 Unfortunately, it has its limits. Due to players exploiting XP farm servers early on, DICE has had to place an experience cap on all Portal game modes. Furthermore, weapon progression is disabled in Portal so you can’t earn attachments.

I suspect the idea behind Portal is that it offers players who want to experience classic Battlefield an alternative. Large-scale, 128-player wars may sound awesome, but it can get tiring. Unfortunately, the lack of progression limits the usefulness of the Portal. Until changes are made this will likely remain a niche secondary mode and never fulfill its true purpose.

Hazard Zone is the main new game mode that has been introduced in Battlefield 2042. Truth be told, I didn’t care much for this ahead of release as I assumed this was just another generic battle royale. The last time Battlefield tried battle royale we got Firestorm, and the less said about that the better.

In all fairness, Hazard Zone does offer something different from your typical battle royale game. Rather than be the last team alive, the goal here is to get to the marked extraction point whilst collecting as many data drives as possible. Doing so will reward Dark Market Credits that can be spent to gear up for future Hazard Zone games. 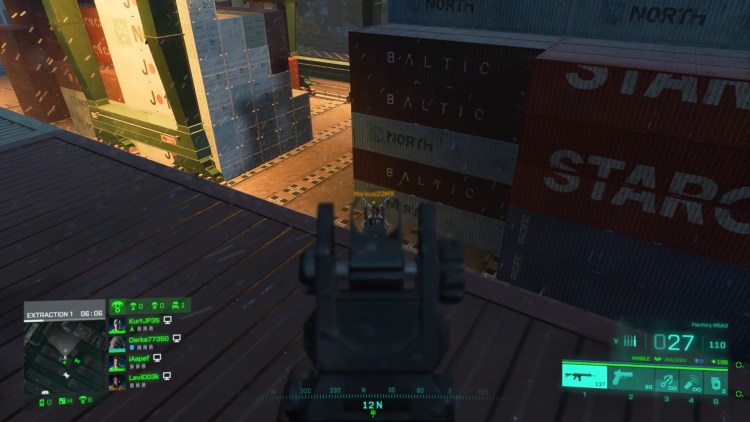 It isn’t just other squads that you are fighting against to reach the extraction points. The maps are also filled with AI-controlled occupying forces that defend the extraction points and will shoot you on sight. This creates a situation where you have to be prepared to fight both the CPUs and other players.

I don’t mind Hazard Zone, but it isn’t anything special. A lot of players draw comparisons to Escape from Tarkov, but I don’t think it’s anywhere near that level. While Tarkov has unrivaled gun customization and tense squad-based gameplay, Hazard Zone offers little in comparison. Although it’s kind of fun when playing with friends, I don’t see this new mode catching on anytime soon. There just isn’t enough depth to it.

I want to emphasize that most aspects of Battlefield 2042‘s gameplay are fun. You can do hilarious things like drive a hovercraft up the side of a building or no-scope an enemy from five hundred meters away. Regardless of the criticism that some players have given it, this game offers a genuinely fun and chaotic Battlefield experience.

Despite this, it would be dishonest of me to pretend it doesn’t have issues. In fact, there are some design decisions that have been made that I can’t even try to justify because they feel so out of touch. More so than anything else, the weapon bloom exemplifies this. 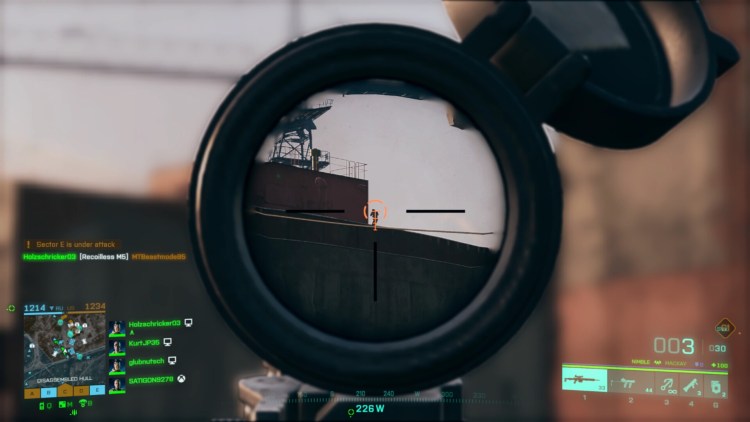 Bloom has no place in Battlefield. Shots like this should not be missing.

Weapon bloom refers to the random deviation of bullets that can occur after shooting. In other words, the bullet won’t always go where you are aiming. This feels awful. Knowing full well that your aim mechanics are on point but not seeing hitmarkers or kills follow that is about the least rewarding gameplay experience I can imagine.

Even worse, this seems to apply to not just the automatic guns, but also the marksman rifles and snipers — taking a precision weapon and making it impossible to be precise. Thankfully, Battlefield‘s lead game designer, Florian Le Bihan, has come out on Twitter and confirmed that his team is looking to address this. Even so, it’s hard to believe that this was ever considered a good idea. I don’t care if it’s realistic or not; you should never sacrifice gameplay for realism. Especially not in a game like Battlefield which is about as arcade shooter as it gets.

I’ve always appreciated how Battlefield‘s progression worked. Rather than having unlocks chained to levels, players would instead progress a class and gun tree by using things from those categories. For example, in Battlefield 4 if you wanted to unlock the SCAR-H you would first have to get 4,000 score using the AK12. It was simple but effective, allowing players to choose how they progressed. 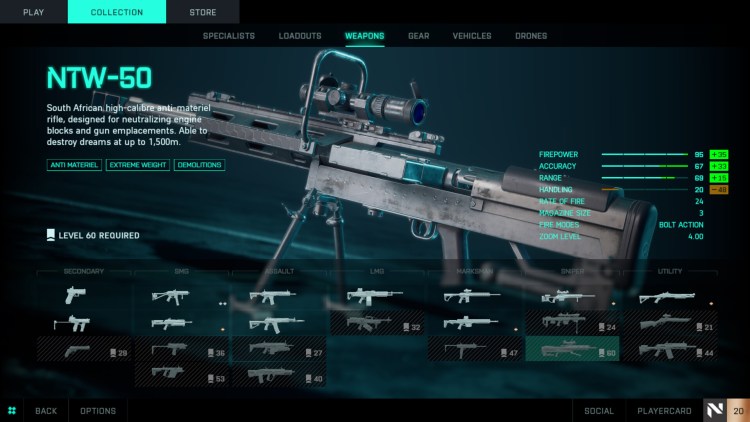 That is all gone. Now you unlock guns and gadgets by simply leveling up Call of Duty-style. You could argue that this is easier to understand. But, let’s be honest, it isn’t very interesting. I can’t specialize in shotguns to acquire a gun I love like the SPAS-12 anymore. I just have to grind out the levels using whatever and playing whatever until I get it. Well, actually, the SPAS-12 isn’t even in Battlefield 2042 with the game launching with only 22 primary weapons. There are more in Portal, but until the experience cap is removed, it’s hard to count them.

It goes without saying that Battlefield 2042 is a gorgeous game. As with all DICE’s titles, this truly pushes the boundaries of what is possible with modern technology. Even on lower settings, which I suspect most people will be playing on, it looks fantastic.

The downside to these visuals is that Battlefield 2042 is difficult to run well. This game is both GPU and CPU intensive, the latter largely owing to its complex physics engine and sub-par optimization. The Steam page claims that this can be run on a GTX 1050 Ti, but I’m not fully convinced. A hypothesis that this benchmark video seems to support. 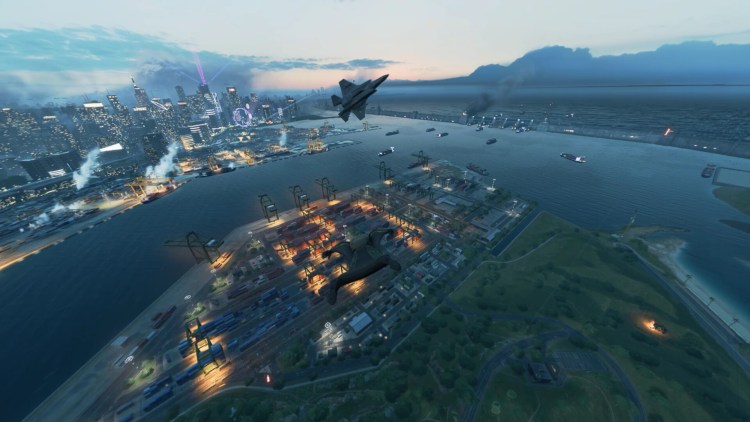 Put it this way, an RTX 2060 barely scrapes by at a consistent 60 fps on 1440p, minimum settings. It’s playable, but not ideal by any means. Also, if you don’t have at least a Ryzen 5 3600 or better I wouldn’t even bother trying. You will most likely experience stuttering and have your GPU bottlenecked by your CPU.

Considering the sheer amount of players and data, the servers tend to hold up well. Certainly better than many battle royale games I’ve played with similar-sized lobbies. Despite this, there is some jitter that can be irritating when it gets particularly unstable. This is something to be aware of, as I have had it impact several of my lobbies.

It’s fun, but patches are needed

Battlefield 2042 is not the best game in the franchise, nor the best shooter of the season. It is buggy, isn’t well optimized, and is home to some bizarre creative decisions that I just can’t understand. Although the community outrage is massively exaggerated, I can understand why some players are frustrated.

Yet, even with all of that said, I can’t bring myself to hate this game. This is still a Battlefield game where I can do dumb stuff and be chaotic as possible while having a damn good time. Throw some friends into the equation and it can get hilarious. It may not be perfect by any means but Battlefield 2042 has already given me some of my best gaming memories of the year. Although, even that doesn’t justify the state the game has launched in. Work needs to be done to make things right.

Battlefield 2042 has a lot of problems. From its optimization, questionable design, and various bugs, it is clear that this game was not completely ready to be released. Yet despite all of that, I have still found myself having a good time bathing in the chaotic fun that is Battlefield. It needs some patches for sure, but Battlefield 2042 is by no means a lost cause.

Sherlock Holmes Chapter One — The Muse From Abroad guide