Roaring out of the six month absence, the man behind Bear Simulator reappears with a pretty length update on how things are going. He doesn’t do quite so well at saying “sorry for not updating for six months” or even really explaining why this took so long, but there’s no doubting that he wrote a bunch of words about Bear Simulator.

And proved he’s still alive, which is nice. This is the update which was promised last week.

“I know I’m behind schedule but hopefully all the things added will make it worthwhile,” he writes. “Kind of holding off on updates because I want everything to be a surprise, just hording stuff to make a grand bear update in the near future. Really want to get this game on Steam so my aim is to make sure it’s all fantastic enough for Steam Greenlight.”

In a summary of his main game-making troubles, he confesses to getting caught up in trying to add too many new things to Bear Simulator and getting sad when he plays other games that feel better than his. Regions in the game have undergone some remaking (before “they were buggy, too open, sort of boring and worst of all, kept crashing,”) and there’s now a user interface/menu, which looks like this. 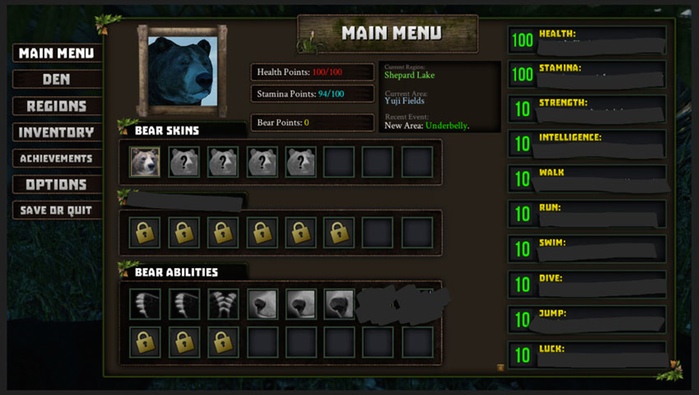 Attempts to implement some sort of two-player adventure mode have apparently not gone too well, and fish are said to have been causing major issues too. Maybe we were all wrong to laugh at Call of Duty: Ghosts and their advanced fish AI? Maybe …

Anyway, there are a lot more issues covered in the update. Things about backer rewards, progress on other parts of the Bear Simulator game, a plan to allow beta testers to play a small part of the game in advance. You know, nice, normal Kickstarter things.

“Anywho, will try to finish it asap but I also want it to be a grand bear game. Should be making more/better updates when I have the game on Greenlight. Everything is organized enough that it should get done it’s just a matter of time,” he concludes.

This War Of Mine Introduces War Child Charity DLC

Terraria: Otherworld is explained a bit more, plus GDC trailer