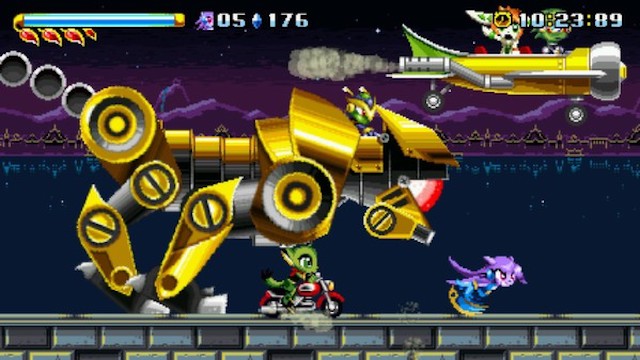 Let’s say you’re big into retro games. You know, titles that are inspired by the likes of the 8- and 16-bit games released during the NES/SNES/Sega Genesis eras. During this time, these games were easy to get into, but hard to master. Regardless, they’re still a lot of fun to play.

What you may not realize is that a number of indie developers have made their own take on the classic retro games, but with a twist. Sure, there are more popular favorites like Shovel Knight and the Castlevania-inspired Bloodstained: Circle of the Moon, but there are also a handful you may not have heard of.

We’re here to set that straight. You’ll find some selections that are just right for you, depending on what you’re looking for in the classic game realm. No matter which way you go, you’ll find something entertaining enough to make you feel like a kid again. And hey, you’ll save the hassle of pulling your classic game system out of the closet.

If you like classic racing games, try… Horizon Chase Turbo

So, you grew up playing old-school racing games like Top Gear and Outrun, did you? With that, you’ll want to give Aquiris Game Studio’s Horizon Chase Turbo a try. This is inspired by the classic games of old, with a control system straight out of Sega school, but also a number of fresh challenges to keep you on your toes.

You’ll also appreciate the wonderful retro-style music, as well as the fast-speed visuals that can enthrall you at every turn. And with a big world map to conquer, there’s no shortage of road to run on. You can purchase Horizon Chase Turbo on Steam for $19.99 USD. Well worth that price.

If you like classic Legend of Zelda games, try… Blossom Tales: The Sleeping King

Want to try a Zelda-style adventure but don’t necessarily have a Nintendo Switch sitting around? Not to worry, as FDG Entertainment’s stunning retro Blossom Tales will fill the void. Developed by Castle Pixel, this game brings with it a wonderful visual style straight out of the old days, complete with some fun music to boot.

But the real draw here is the combat, as you change your fighting style with various weapons — quite useful considering the tough bosses you’ll be pitted against. With 15+ hours of gameplay, lots of puzzles to solve, and a few surprises in the story, this game will easily Blossom in your game collection. You can find out more about it on the official Steam page, then snag it for just $15 USD.

Those of you that have heard of Devolver Digital may have already picked up the thrilling Enter the Gungeon, a shooting adventure for the ages. But what if you need more bullet-heck action with a retro twist? Enter Moppin’s Downwell, a simply made but wonderfully elegant journey into Hell.

The game follows a nameless hero as he makes his way through an endless array of caverns, with new difficulties and enemies at every turn. He’ll have to shoot downward to clear the path, occasionally nabbing power-ups and avoiding lethal obstacles to stay alive.

What may start as a routine five-minute session will become hours of addictive play. And at a great price, too, as Steam currently has Downwell for a mere $3 USD. That makes this a value to put your money, ahem, down on.

There are more than enough beat-’em-ups to make the rounds on Steam, including Castle Crashers and even the Streets of Rage games. But if it’s an original, exciting entry you’re after, SebaGamesDev’s Fight’n Rage is perfect. The game revolves around three different heroes as you attempt to rescue babes while taking out adversaries, human and animal alike. You’ll use a number of swift moves to your advantage, while at the same time finding weapons and power-ups to keep your health from dwindling. With an atmospheric soundtrack, tons of great gameplay to master, and challenging boss battles, this is one retro Fight you should happily take up. Check it out on Steam now for $19.99 USD.

Although Jamestown+ has been around for a few years on Steam now, it’s easily reminiscent of the good ol’ days of 16-bit-style “shmups,” or “bullet hell” shooters if you prefer an easier term. Featuring a bizarro sci-fi story with a Western twist, Jamestown+ pours on the challenge across a number of modes, while you unlock a plethora of ships and weapon types to mix things up a bit. You can also bring your friends along for the ride, as the game supports up to four players at once — and the more firepower, the better when it comes to boss battles. With utmost quality in almost every frame and slick shooting action, Jamestown+ still delivers after all this time. Check it out for yourself on Steam.

With the sequel coming our way in just a few weeks, Freedom Planet seems like an easy recommend. Sure, Sonic the Hedgehog fans could easily turn to Sonic Mania Plus and be just as satisfied. But GalaxyTrail’s innovative platformer will hit all the right notes with those fans. Featuring some terrific animal characters and tight platforming action, Freedom Planet reminds us of the retro jump-and-bop action of old. And you can pick up the original game for $15 USD right now while getting prepared for the sequel’s arrival. It never hurts to practice up and see what other animals, besides hedgehogs, can do.

If you like Metroidvania style games, try… Axiom Verge

Game dev Tom Happ recently confirmed that Axiom Verge 2 is on the way, likely to hit Nintendo Switch first before making its way to PC. Still, its arrival is inevitable, so there’s no better time to discover the original that started it all. Inspired heavily by Nintendo’s Metroid games, but with nuance and design all its own, Axiom Verge is a stunning journey into the darkness. Using sharp 8ish-bit visuals and sound, the game also benefits greatly from original gameplay techniques, hidden items, and other fun goodies. It’s a real blast from the past, but still made in this generation. Check it out on Steam now and feel the urge to Verge.

If you like Road Rash-style games, try… Road Redemption

There’s a very good question afoot here. How come EA hasn’t released a new Road Rash game in years?! It’s been the hottest racing series going for quite some time, and then it just dropped off the face of the Earth. Sigh.

Luckily, we have EQ-Games and Pixel Dash bringing us Road Redemption, a fantastic racing game that takes the Rash formula and turns it on its head. No, literally, you’ll bash opponents off their bikes at high speed while trying to win races and hunt down boss riders. It’s good, twisted fun and works as a great tool to get your aggression out after a hard day’s work. Join the Redemption fun by grabbing it on Steam today, and we’ll see you on the road (no, literally, you’ll probably be on the road).