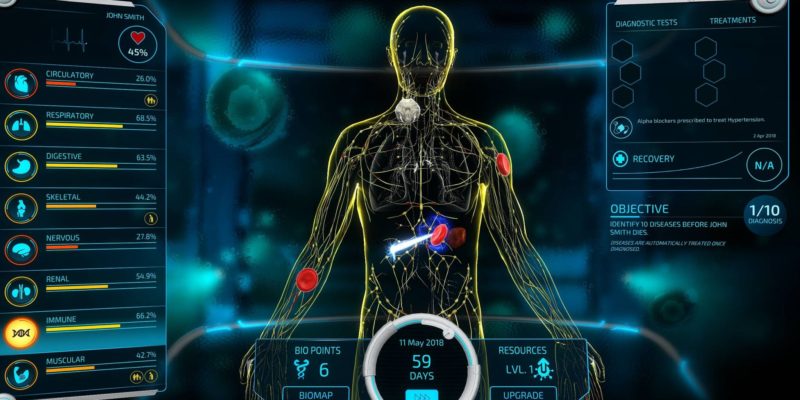 Becoming a doctor is not easy, it takes years of studying and practice. Now with the help Bio Inc. Redemption from DryGin Studios, everyone can play doctor and test their knowledge of the medical profession, or in most cases, lack of knowledge.

Bio Inc. Redemption is a strange game in which players are challenged to diagnose a patient and then attempt to bring them back to full health or kill them. Yes, there is the option to try and actually kill the patient that lies helplessly on a medical table.

The game sounds like it should be incredibly complex but it’s quite a simple premise and relatively easy to play. As the doctor, you need to take samples from the patient, look at the symptoms, try and diagnose the cause of those symptoms, then treat the patient before he keels over and dies. 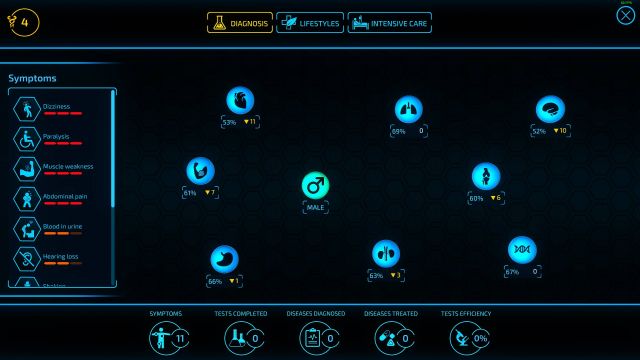 Diagnosing and treating a patient can only be done by collecting Bio Points which involves collecting blood cells from the patient which appear on the patient’s body and have to be clicked on with the mouse. These cells are collected from the patient’s different systems which include nervous, renal, immune, digestive etc. These are all accessible from the main screen and players are alerted when new cells can be collected. This involves flipping between the patient’s different systems as fast possible to collect the cells with the mouse before they vanish which does get tedious.

This resource system makes sense but it’s also one of the game’s annoying mechanics. Your patient is left suffering and new symptoms appear as you wait for these cells to appear for collection. With each diagnosis and treatment requiring a certain amount of Bio Points to administer, it’s a battle against the clock as the patient’s symptoms worsen. The process can be sped up by upgrading the resources option with Bio Points as you play but it’s still tough as you frantically click around trying to collect Bio Points.

The game is basically a process of elimination and a little bit of trial and error on testing for causes of symptoms. If you have a little bit of medical knowledge then there are specific areas that may jump out to check first. Not being medically trained whatsoever means looking at the possible causes on the Bio Map and then seeing which possible causes match the majority of the symptoms and then running some tests before applying the solution. All of which costs Bio Points. 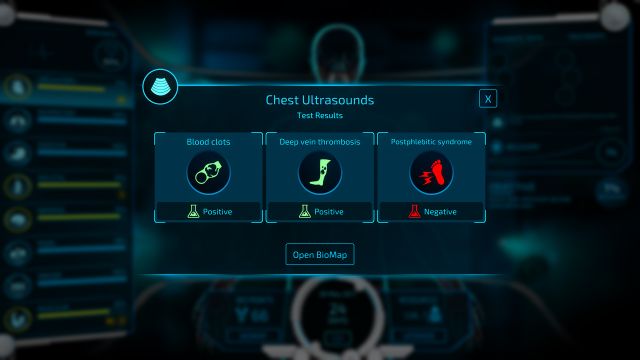 Once a test is ordered, it takes time for the results to come in and time is not always on your side. The longer you take to remove the symptoms the worse the patient is likely to get as the patient’s other ssystems start to fail. Some of the cases I encountered were insane and included Parkinsons, dementia, heart attack and more all at the same time on the same patient. If you were that unlucky in life there would be some serious questions needing to be answered with regards your health, exercise, and diet. Lifestyle choices do play a part in treating the patient as well as the patient’s mental well-being so you need to also keep an eye on those.

Keeping a patient alive is a challenge but the more you play, the more you start to recognise symptoms and possible cures which starts to make the game a little easier. There is the option to play Dr. Death where the tables are turned. If curing patients starts getting a little dull then why not try and bump them off.

Playing in the Death mode you need to do the exact opposite of the above and start inserted illnesses and viruses into the patient to finish them off as fast as possible while the AI doctors try to treat the illnesses you are giving the patient.  The game also comes with a multiplayer mode where one person can try and save the patients while the other tries to kill them off. You have to feel for the poor patient caught in the middle of that battle.

Having sunk quite a few hours into Bio Inc. Redemption I can safely say it’s quite challenging but also a quite repetitive. I also found the whole experience a little macabre, especially when testing out the death option. Attempting to kill off my patients just made me feel a little uneasy about what I was trying to do. Silly I know as I am dealing with a patient made of pixels, but still, it made me feel a little uncomfortable.

Bio Inc. Redemption is an interesting game and you may even learn a thing or two about medicine. If you read the notes that pop-ups between games and also pay attention to the symptoms and treatments you may learn a thing or two. The game is also reasonably well executed but it might not keep you engaged for long due to the repetitive nature of the gameplay and the annoying resource collection. It did also crash out quite a few times which was also frustrating (Update: This may have now been patched). Perhaps the game was trying to tell me something about my medical abilities.

An interesting concept which is let down by the resource system and the repetitive nature of the gameplay.

Extinction gets a story trailer ahead of next month’s release

Life as a Battletech Mercenary is not straightforward

By Kevin Foley8 hours ago
Reviews