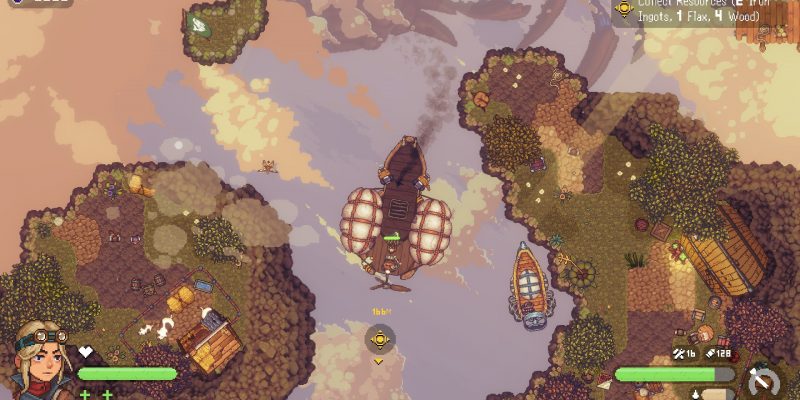 Through the ages, gamers have clamored for one thing: a game that allows you to fight both in your flight craft and on foot. That desire has taken us on a road littered with corpses like Battlecruiser Millennium. Will Black Skylands join it among the rotting bodies of its peers? Or will it fly gloriously, blasting broadsides at the clouds?

But first off, the story. The Earth in Black Skylands has experienced an oopsie woopsie, so everyone now lives on floating islands and sky ships. The people have separated into guilds – scientists, earners, falcons – probably following the ancient lore laid down by Divergent. You’re Eve, an adventurous Earner, and your dad is the moron who brought on the massive alien bug Swarm that’s now trying to eat your people. This has also led to the rise of fascist Falcons who rule with an iron fist. Will you be able to shoot your way out of all of this?

Black Skylands is a game about using your sky ship (part dirigible, part sailing ship, all action) to flit from island to island to liberate the people, collect resources, go on quests, grow in power, and then shoot the Swarm in the face. Your fallback position is the Fathership your family lives on, and there you’ll construct buildings for various upgrades and resource benefits. It’s also the place that will refuel and repair your ship for free. 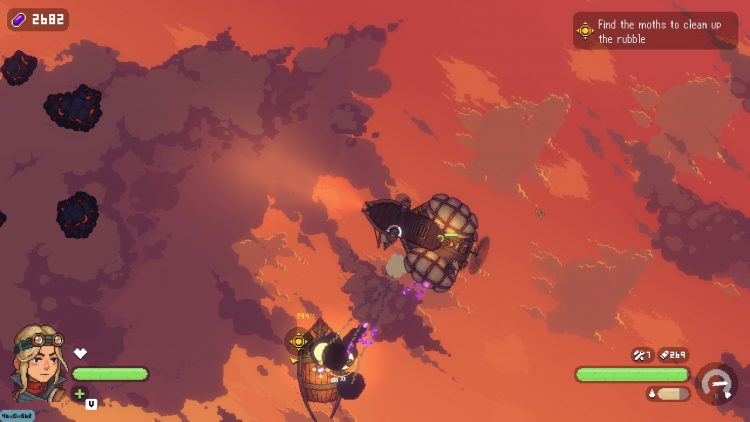 When it comes to missile-firing enemies, you can act as your own CIWS.

As Eve, you’ll have three guns on you at all times, but your melee attack is nothing to sneeze at either. What else is in your bag of tricks? A hook, which is a necessary tool in a place where falling endlessly to your death is always an issue. The hook not only allows you to zip onto hard land, but also draw in enemies and resources.

You also have Luna, your moth. As Black Skylands leans heavily towards anime influences, moths in this game are like Harry Potter owls who’ve spent a lot of time at the gym: they not only carry messages, but are also strong enough lift a person. Luna will bring you back to the ship if you’re defeated, carry resources back if you tell her, or even carry you back to the boat if you’re in the middle of an island and don’t fancy footing it back.

Bombardiers to your stations

So those are the basics. You might start getting an inkling that there’s more to Black Skylands than just pretty pixel art graphics, yeah? Well, you’d be right, as the ground component incorporates instakill backstabs, killing enemies with melee to get ammo, weapon switching, reloads, recoil, hook tricks, exploding barrels, and using your sky ship as a gunship to mow down hapless landbound infantry. 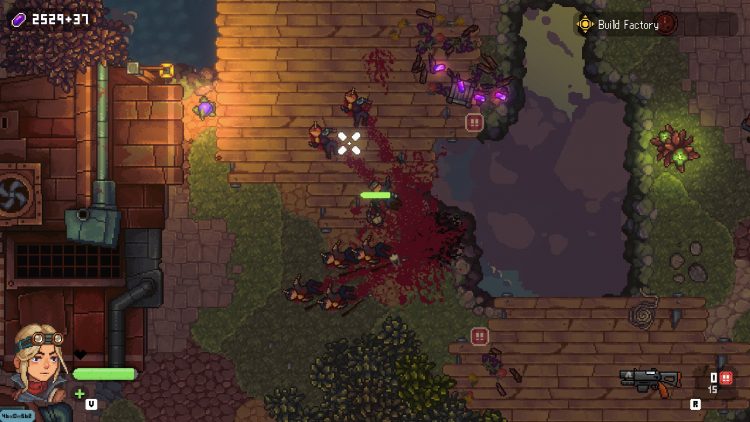 How many eighteen-year-olds do you know who can slaughter seven men without collapsing into a pile of trauma?

The battles in the skies are no less intense! Your ship may have a single pair of guns, but you can rotate these for easier targeting while also firing individually. The starting Behemoth is slow and sturdy, but can’t fire straight ahead – only front-side, directly to the side and aft-side. Needle, the first boat you can buy, can rotate guns to fire directly to the front, but has no way of shooting to the aft – though it is nimble, yet less enduring. Oh, and ship rotation is influenced by recoil while the weapons can overheat from firing, so keep all of that in mind.

But that’s not all. If you’re not driving the cloud boat, you can walk around the deck, usually for disembarking via hook. You can also bring crates back into the hold. This is how you mine coal, which is only found in floating asteroids. Said asteroids are also usually a navigational hazard.

As your ship gets damaged, holes appear on the hull, which you need to run to and repair to get that HP back. And if things take a turn for the silly, you can use your personal firearms to shoot at the enemy from the safety of your boat, up to and including using sniper rifles as the game’s premiere BVR platform. 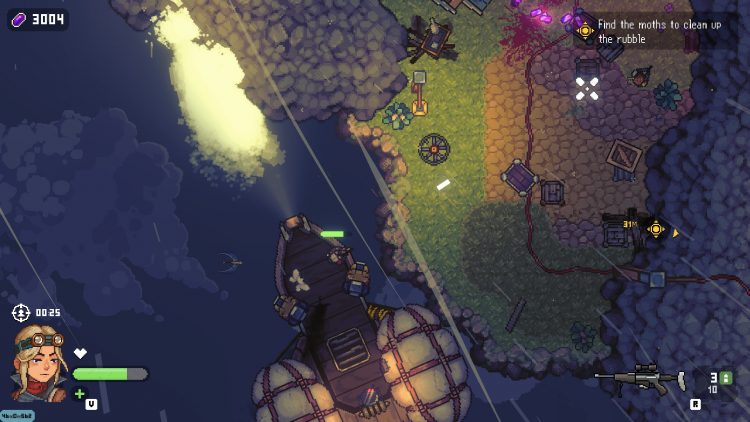 Sniping is just the thing I’m doing in this screenshot.

Enemy-controlled islands are rated by the abstract power of ground and air complements separately, so you need to upgrade both your gear and your boat to take them on. This requires collecting resources, growing plants (on timers of about five to 10 minutes) in your base for trade or crafting, and finding mod crates for weapon components. Yes, you’re not only buying guns at the arsenal, you’re also kitting them out with new barrels, magazines (one type throws the magazine like a grenade on reload), butts, and sights.

Now, all of this is exciting, but there are issues with Black Skylands as well. For one, the garrison power mechanic sucks. Say you have a 412-power boat. If you dare show up next to a 420-power island, you will get killed. The flying enemies and the anti-ship turrets will be bullet sponges that will shoot you down in two hits. In fact, forget the usual turret disposal trick of just stabbing it in the back. An enemy with that “power level higher than yours” skull above them will be immune to your tricks. Which is not great if resources needed to get necessary shit upgrades are currently surrounded by enemies that can two-shot you out of the sky. 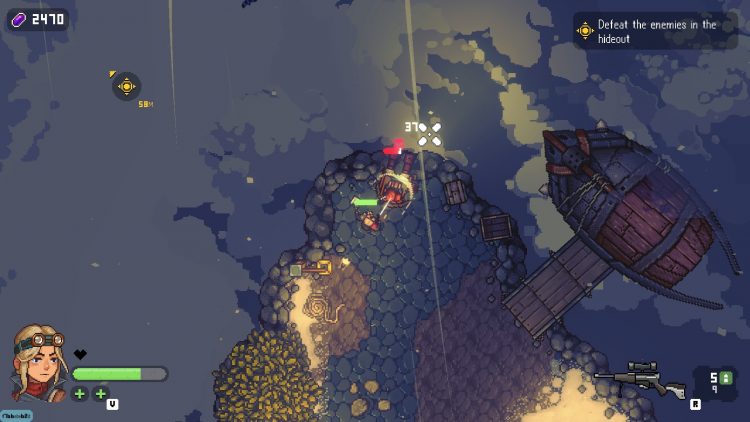 “I should be able to deal with this thing with 20 more backstabs!”

Yet that isn’t the only sequencing issue you can run into. Black Skylands is just about to hit Early Access, so you will encounter bugs a plenty. For example, I once had a bossfight where the boss just wouldn’t die. I died in another bossfight, but instead of being respawned at the start, I awoke back at the Fathership and had to fly back to the fight. Then I learned that the boss fires instagib waves that your boat can’t dodge, so I had to find a way to maneuver myself so that I’d be able to reach the fight on foot.

Oh, and another time, I cleared an island from occupation (while looking for resources) before completing a plot-relevant fight at a bandit base, so now the island is full of civilians and endless artillery barrages, and I think I’m locked out of campaign progress.

I also encountered some deathless random enemies, too. Another time a bug made enemies forget that they can attack, which bought me some breathing space for a time. I’m also fairly certain that making Luna carry a mod box back to the ship makes it disappear. There’s also one bit of tutorial text that’s still in Russian, so I have no idea what one of the sky structures is supposed to do.

All in all, Black Skylands is a fairly dope game. The writing is actually really well translated – or, at least, it’s no more ESL than any other localized anime game. It’s also humorous in parts! The art is beautiful, and there’s real depth to the game mechanics. Not a bad state to enter Early Access in, but I would hold off from buying it until they fix all of those sequencing issues at the very least.

By A.K Rahming6 hours ago
Previews

By Jason Rodriguez10 hours ago
Previews