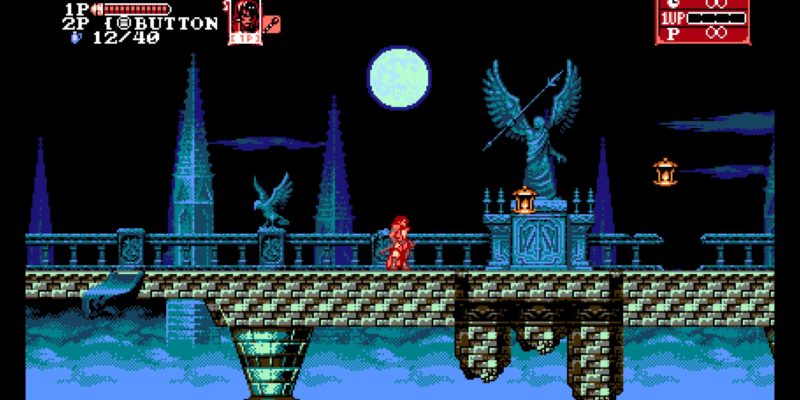 It was a surprise not only when this game’s predecessor was announced, but that it was also a tie-in to Bloodstained: Ritual of the Night. However, it was a fun, brief game that ended up quite welcome. Bloodstained: Curse of the Moon 2 will likely be just as well embraced. It’s another fun blast of classic Castlevania goodness that has beautiful 8-bit graphics, excellent controls, and great level design. When you add in the high level of replay value, you’re left with one satisfying 2D platformer.

Zangetsu returns as the lead character in Bloodstained: Curse of the Moon 2. He’s now joined by three new hunters who are unlocked by completing a few of the game’s eight stages. These are Dominique, the villain from the first game (don’t worry, she’s good in this timeline) who can jump higher than the rest, attack upward with a spear, and has access to sub-weapons that heal the team. Then you have Robert, a guy with a rifle that can go prone, crawl, and wall jump. Finally, there’s Hachi, a corgi in a suit of steam-powered robot armor that has the most health and can hover.

Just as in the last game, you can swap among these four characters at any time. And for good reason, as their different abilities let you access different parts of levels, which will net you some different items, hidden areas, and shortcuts that I’m sure speedrunners will have a field day with. Dominique is my personal favorite of the four, as I really like being able to attack upwards and she makes platforming more manageable. 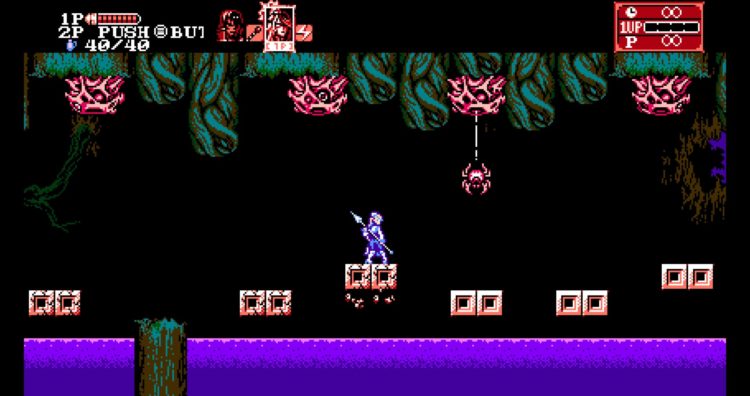 As in its predecessor, Bloodstained: Curse of the Moon 2 has very little plot but it does throw some surprising wrinkles into the mix. The game only has eight normal stages and it takes a couple of hours to get through. Once the credits roll, though, you’re informed that episode 2 is now available. One of your characters is gone and you’ll be playing through somewhat different versions of the game’s stages again. There are even more episodes after that, giving the game a surprising amount of longevity. The missing three characters from the first game even show up and are fully playable.

What a wonderful day to have a curse

Bloodstained: Curse of the Moon 2 is a side-scrolling platformer in the vein of the NES Castlevania games, as is obvious. You spend your time moving through the levels while dodging hazards and fighting enemies. Jumping works just like it does in the classics, so you can’t change your trajectory once you’re airborne and must hold the direction prior to jumping. The controls are excellent and the characters all move and feel quite different from one another.

Just like the last game, there are two difficulties included — veteran and casual. Veteran has a lives system just like the old games and, if you run out, you start the stage from the beginning. On casual, you have infinite lives and don’t get knocked back when hit. The more accessible difficulty can certainly dial down on the frustration for players who may not be familiar with the old-school mechanics. If a character dies, you’re then taken back to the start of the room as a surviving member. But if all your characters die, then you return with all of your characters at the last checkpoint, which is a candle that gets lit when you approach it. 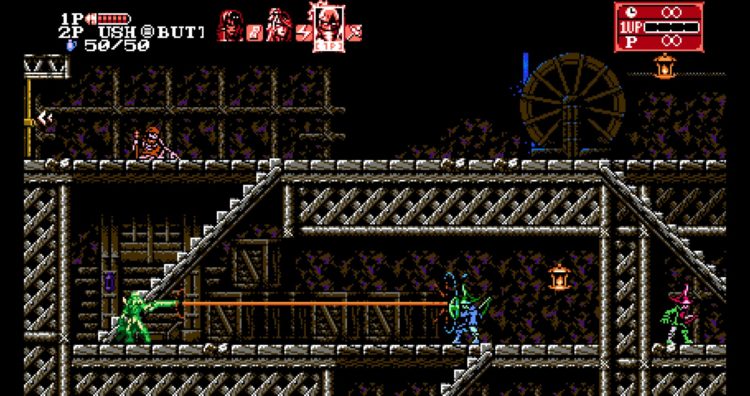 Each character has unique sub-weapons that drop from candles. These run off of magic power that you can hold a certain amount of. You’ll also find hearts that heal the character who picks them up. Although each character has their own health bar, the whole team shares magic. Sub-weapons are typically used for attacking, such as Zangetsu’s seal or Robert’s spears. But Dominique and Hachi are a bit different. Dominique also has attack sub-weapons, but she gets healing ones as well. One of these grows a plant from the ground that releases a giant heart, while the other is quite rare and can resurrect and heal your whole party. Hachi’s sub-weapon, on the other hand, makes him invincible until your magic runs out.

Although Bloodstained: Curse of the Moon 2 is completely stage-based, you can revisit other levels whenever you want. And since there are items you can’t get until you unlock other characters, there’s some incentive to do this. There are multiple types of upgrades to be found and they tend to improve your whole party. You’ll find HP increases, magic power increases, as well as defense and attack ones. It really pays to keep an eye out and it’s fun to search through the levels and hunt for these.

You’ll even find sword upgrades that change Zangetsu’s attacks. Early on, he’s not quite as useful as other characters, but once you upgrade him he becomes a force to be reckoned with. His three-hit combo and downward aerial slash are very reliable damage-dealers that significantly change up the way you use him. 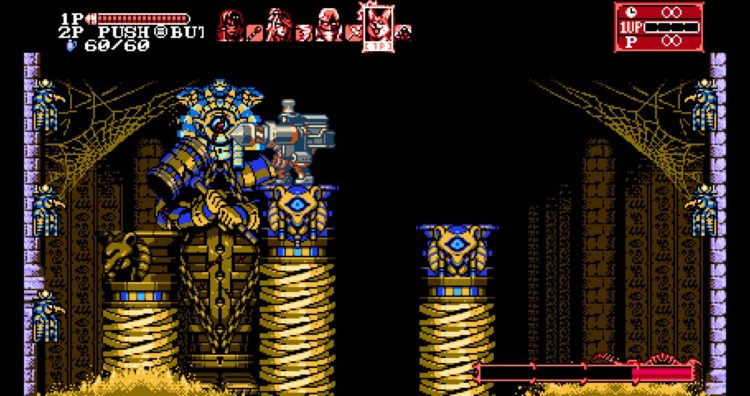 That being said, some characters just aren’t all that viable against certain bosses at all. This is either due to their jump height or attack, as they might not be particularly suited to meeting certain challenges. Speaking of which, the boss encounters are uniformly great. Their sprite-work is truly impressive and they’re all unique and interesting. They also get some different moves depending on which episode you’re playing.

Bloodstained: Curse of the Moon 2 works well on PC despite various issues with micro stutter and crashes prior to a quick patch. Inti Creates seems to have patched these issues within 12 hours of the game’s release, which is really something. When you first start the game, a small window opens and you then calibrate your controls. For whatever reason, the right trigger on my controller wouldn’t register, but that isn’t used anyway.

Once you get that out of the way, you can choose to increase the game’s scale up to 4 and activate fullscreen. On a 4K TV, the game looks great. It’s 8-bit, sure, but the levels are dazzling and much of it couldn’t be replicated on an actual NES. The environments are all varied and there are a plethora of well-designed enemy sprites. This game really shows how much detail can be packed into an intentionally retro title. 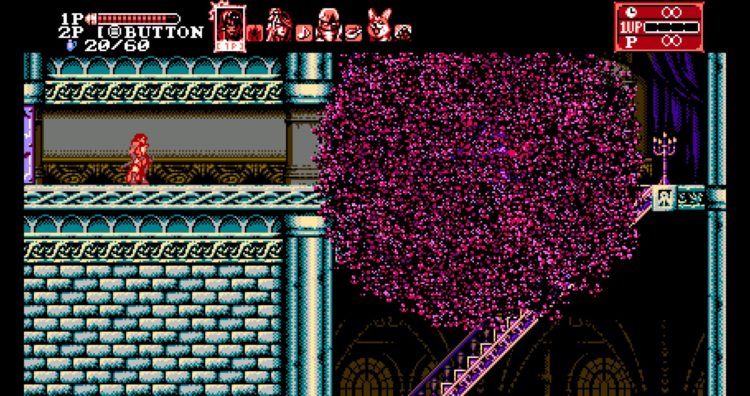 Inti Creates has a habit of coming out of nowhere with these awesome retro games, and Bloodstained: Curse of the Moon 2 is no different. With hours of replayability, fantastic visuals, and tight gameplay, there are a whole lot of reasons to get cursed by the moon again. As long as you don’t mind replaying the game multiple times to see the real ending. 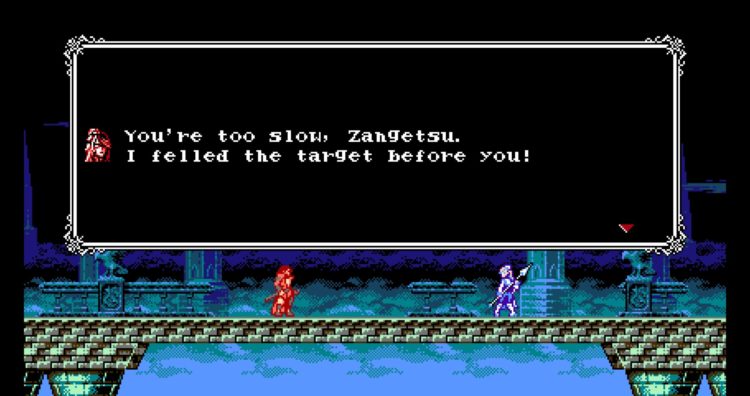 Bloodstained: Curse of the moon 2

The visuals are great, the controls are exactly what they should be, and there's plenty of satisfying platform action to be had. Bloodstained: Curse of the moon 2 will make fans feel right at home like it's 1989.