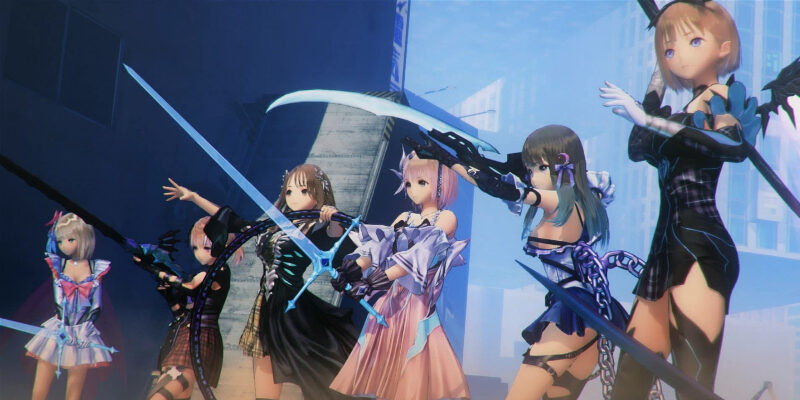 Blue Reflection entered the JRPG scene in 2017. The consensus? It was okay, but clearly flawed. The game showed a lot of the typical signs of a budget JRPG, especially due to its lack of polish. But the potential was there, and if the feedback was acted upon, a well-made sequel could elevate the series to another level. Judgment day has now arrived with Koei Tecmo and Gust releasing Blue Reflection: Second Light.

Truthfully, it’s surprising we even have a sequel to play. The original achieved reasonable sales but hardly took the JRPG scene by storm. Many had assumed that Blue Reflection was set to become yet another ambitious, but forgettable, game. And yet, it turns out that Koei Tecmo has not given up on this series, and neither had Gust. If my time playing Second Light is anything to go by, then that is a fantastic thing.

Delving into the Heartscape

The protagonist Ao Hoshizaki and the other girls are tasked with exploring the Heartscape. The Heartscape is a mysterious world that is created based on a person’s memories and emotions. Its concept is similar to that of the palaces from Persona 5. Although, in this case, the purpose of completing a Heartscape is different.

Unlike Persona, Blue Reflection: Second Light is about rediscovery rather than facing your other self and growing as a person. All of the girls that have been sent to Hoshinomiya High have had their memories wiped. The only way to get them back and figure out who they are is by exploring their Heartscape and finding memory fragments. 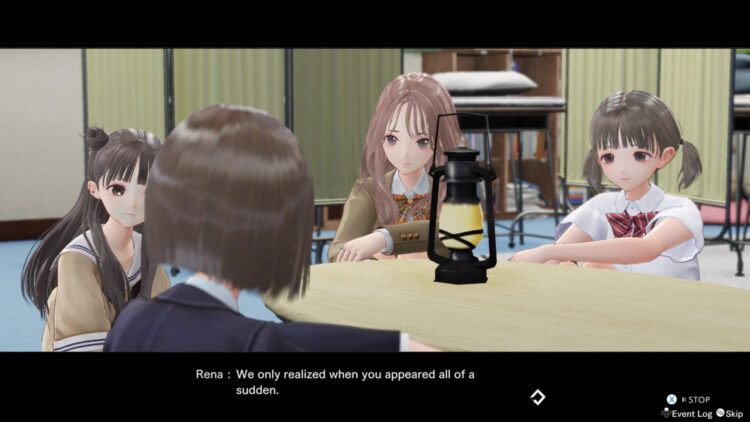 The story and characters of Second Light are by far its biggest selling points. Each character has an interesting backstory that fits their personality. Don’t expect any tragedies or life-changing narratives, as the narrative is surprisingly grounded for a game about magical girls. Instead, it mostly focuses on realistic problems that even you or I may have to overcome someday. It’s a pleasant change of pace from the dramatic end of the world storylines that JRPGs often go for.

Credit has to be given to Gust for the strides made in this department. The original Blue Reflection had a bad habit of giving a character a story arc and then having them slip into irrelevance soon after. In contrast, Second Light makes sure that all of the main cast remains the main cast from their first appearance right up to the ending. It makes it easier to care about each character when they are presented as people rather than just another plot point.

Hoshinomiya High has been greatly expanded with several new areas introduced. In addition to this, you can now freely move around the camera rather than stay stuck with whatever the game decides is best. This extra level of freedom is appreciated.

At first, there isn’t too much content in the school to justify looking around, but this changes over time. Once a few extra party members are recruited and you begin building new facilities, it becomes lively. Plus the dating mechanic where you can complete tasks with the other girls provides a reason to look around. 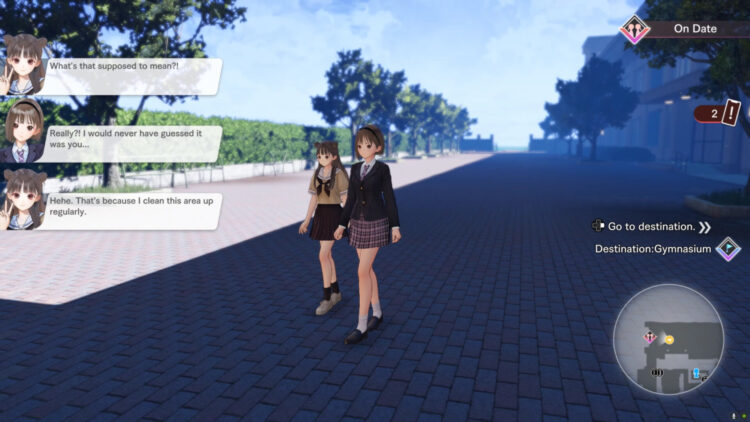 Speaking of dates, the yuri overtones present in the original have been turned down a notch. That change won’t be to everyone’s taste, but it does fit better with the game’s setting and aesthetic in my opinion. There are still some options to develop relationships with characters but it’s strictly platonic this time around.

Outside of dates, the other reason you are likely to explore is to complete side quests. Side quests come in the form of requests made by other characters. These are basic fetch quests that I expect to see in just about every JRPG. Being asked to collect three Rainbow Corn isn’t too interesting, but at least the rewards are usually worth it. 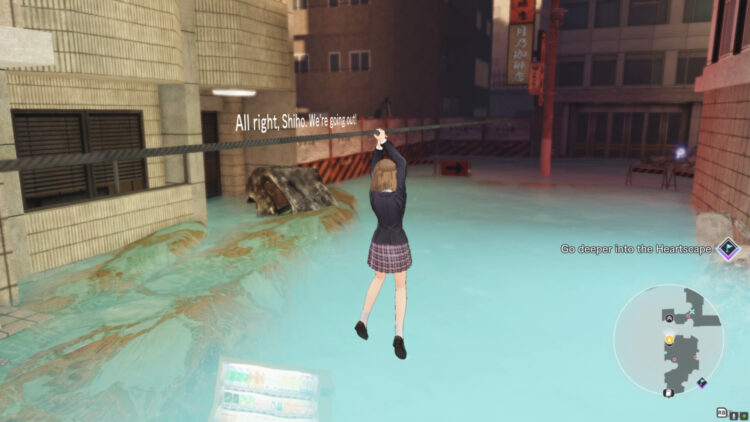 The dungeons don’t offer too much of interest from a gameplay perspective. They are functional and the new stealth mechanic makes moving around them a little more interesting than the first game, but you can find several JRPGs out there that offer more in this regard.

Thankfully, the art direction of each Heartscape holds up better. Heartscapes are designed to represent a twisted rendition of a location that is important to each of the girls’ pasts. All of the Heartscapes are gorgeous and work well as the main area for each story arc. It’s just a shame that the gameplay half of the dungeons doesn’t reach the same heights.

Blue Reflection: Second Light has a fairly complicated combat system. This is proven by the sheer quantity of tutorials that you have to work through in the first seven hours or so of gameplay. Many of these mechanics have been directly lifted from the original but given that this was an area where Blue Reflection excelled, that isn’t a bad thing.

The premise is that there’s a timeline that shows when each character will be able to attack. This timeline has both your party members and the enemies on it. There are highlighted sections for 1,000 EP, 2000 EP, and so on. EP stands for Ether Points, the resource required for using attacks. The more powerful the attack, the more EP required. 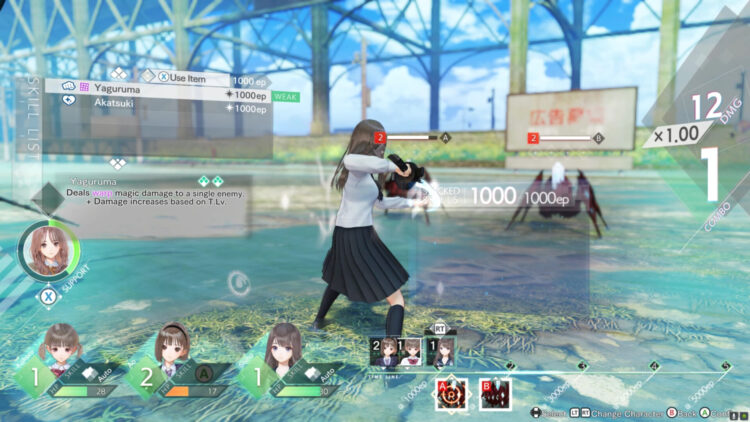 In the early game, you just spam low EP moves, as that’s all that is available. But this mechanic gets more interesting as you progress. Once higher EP attacks are unlocked, each battle becomes a balancing act. Ideally, you want to charge up EP to use more powerful moves but this comes at a cost. Whilst you idle and wait for EP to charge, enemies can freely attack.

Naturally, there are plenty of ways to grind out better stats. The most consistent method is just leveling up party members, but that’s not the only way. Talent points earned from dates and side quests can be used to unlock additional skills, stat boosts, and new passives. Some of these can quickly turn a character into your party’s strongest member, so they are worth the time investment. JRPG grinds usually exist to artificially inflate the length of a game and aren’t always rewarding so this is nice to see. 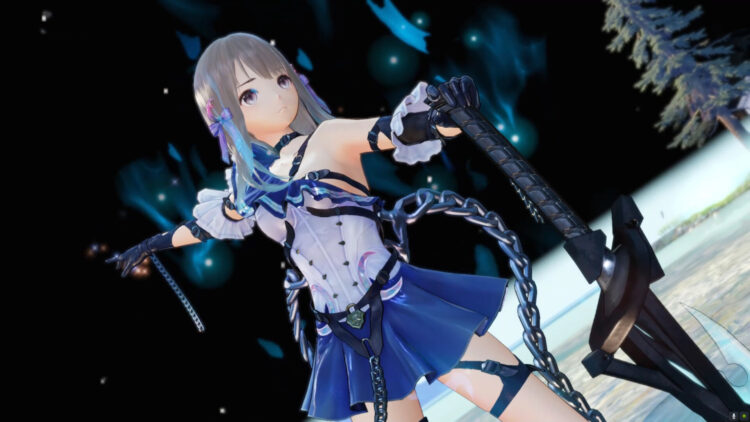 Of course, Blue Reflection: Second Light is a game about magical girls, so epic transformation sequences are a must. And on this front, I can say with confidence that it does not disappoint. They are colorful, vibrant, and all unique. Those that grew up with the likes of Sailor Moon and Cardcaptor Sakura will feel right at home.

If I did have one criticism regarding the transformations, it’s the mechanic attached to them. The trigger for determining when you can transform is vague. It’s linked to the gear mechanic where the girls can enter a higher gear by building up their Ether recovery speed. But I don’t think it works overly well, as it’s unnecessarily complicated. Furthermore, this transformation is automatic once third gear is reached, often causing it to interrupt the battle’s flow. The transformations may look cool, but their execution is far from perfect.

Exactly what a sequel should be

My expectations coming into this sequel weren’t too high. I enjoyed the original for what it was, but its limitations prevented it from becoming anything special. So I am very pleasantly surprised at just how well-made Blue Reflection Second Light is.

If the definition of a good sequel is a game that expands and improves on its predecessor’s ideas, Second Light is the epitome of sequels. Almost everything from the first game has been improved, with the character writing taking the largest stride. The result is a game that is second to only Tales of Arise for JRPGs I’ve played this year. Considering that Tales of Arise is a serious contender for the greatest JRPG ever made, it’s fair to say that Gust has done a fine job with Blue Reflection: Second Light.

Reflection: Second Light is a perfect example of what a sequel should be. It takes the ideas put forward by the original and improves all of them. There's better exploration, better visuals, and, most importantly, much better character writing. The original was an average and forgettable JRPG. In contrast, Second Light is one of the best JRPGs released in recent memory.

Riot Games reveals Among Us collaboration in new Arcane trailer

Genshin Impact: How to beat the Anomalous Ruin Grader in Shadow of the Ancients