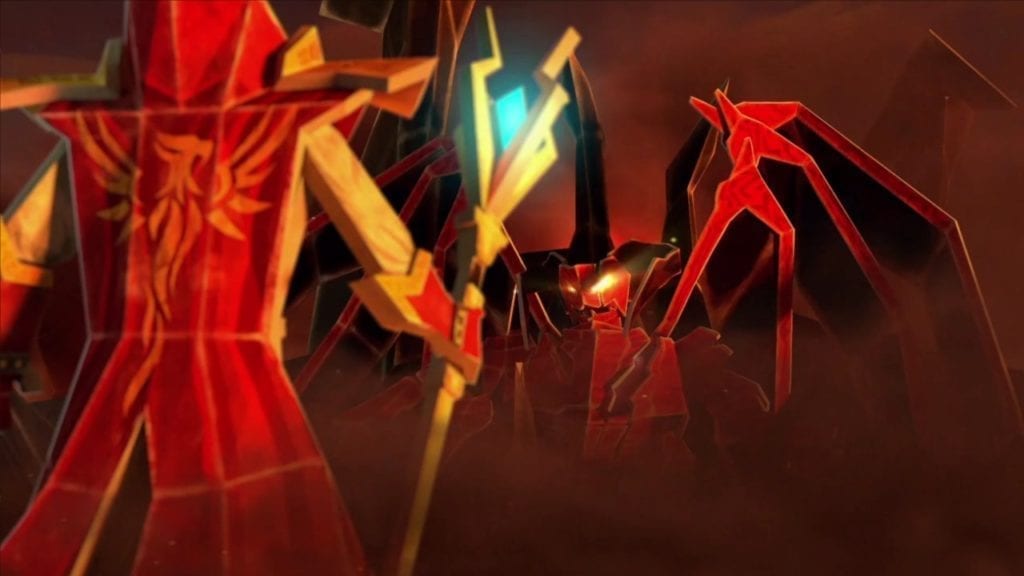 They say imitation is the sincerest form of flattery, and I certainly doubt any other product could do it better than Book of Demons. This action-roleplaying (ARPG)/deck-building/bullet hell hybrid from indie game dev Thing Trunk fully embraces what made the Diablo franchise beloved in previous years. The game officially launches today after two years of development as a Steam Early Access title.

Now, you might notice that I jotted down a slew of genres but that’s because Book of Demons is an amalgamation of various gameplay mechanics, set in a Diablo-like world, presented in Paper Mario-esque detail. All of these result in an amalgamation unlike any other.

The ARPG aspect is, of course, Diablo-like in its template. You dive into a dungeon that goes deeper and deeper, taking out skeletons and demons alike. You grab all the gold and the loot, then make your way to each boss encounter. It’s the additional mechanics and presentation which make Book of Demons unique. 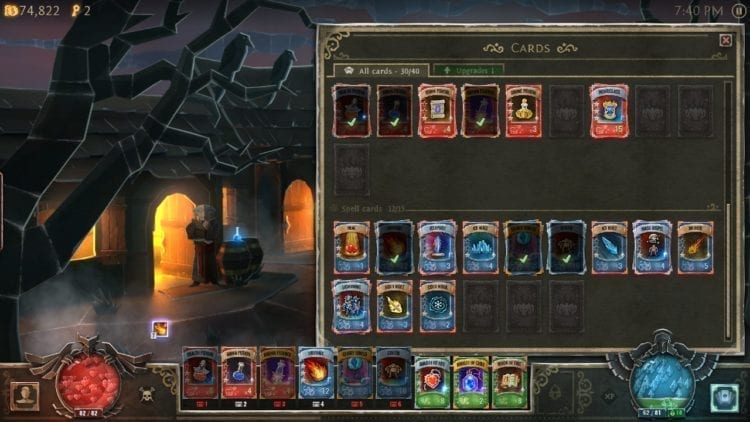 The card system: You can mix-and-match between the various item, spell, and artifact cards that you want to use. Note that your card slots are limited until you buy more using the gold you’ve obtained.

The deck-building aspect isn’t so much Hearthstone nor Magic: The Gathering. Think of it simply as a means to an end. That’s because these cards represent your items, spells, and artifacts (or passives). Your characters — the Warrior, Rogue, and Mage — don’t have their own skill trees whatsoever. Instead, your dungeon-delve is complemented by way of these cards: 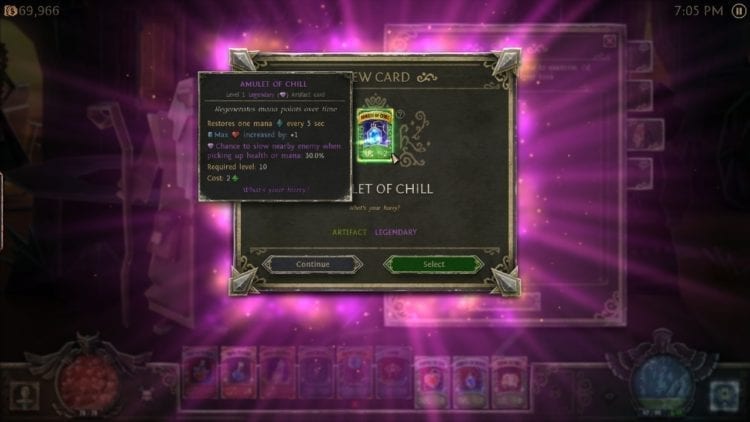 There are also rarer legendary versions of cards which provide stronger effects. For instance, the mana potion card is just that, it restores your mana. A legendary version, meanwhile, also slows down time. All the cards you have can be upgraded (or downgraded) as well to tweak their effect durations.

At the start, you only have a handful of active cards that can be selected (your active skills for the most part). Later on, you can add more card slots by exchanging the gold you’ve obtained in your dungeon crawls. You can mix-and-match these cards at any time to find a “build” that suits your playstyle or the dungeon at hand.

Flex Your Muscles in Book of Demons 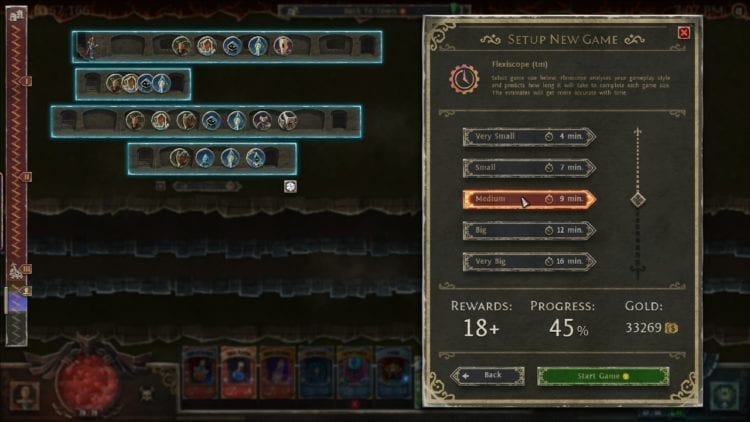 The Flexiscope system: You can tweak how many dungeon rooms/sections you’ll need to explore.

Book of Demons has three difficulty modes (Casual, Normal, and Rogue-like/Hardcore where perma-death is enabled). It doesn’t just end there, however. That’s because the game features “Flexiscope.” You can choose how long your entire dungeon trek will be for that particular act. You could have just a couple of rooms to explore and be done in around five minutes. Or, you could opt for an epic delving experience that lasts 30 minutes.

Your selection will, of course, influence the size and scope of each room. That means you’ll gain more rewards from bigger dungeons or lengthier runs. Still, it’s a worthwhile feature to have given that busy folks might only have time for a couple of quick runs before heading out to work, or taking a breather. Book of Demons is, essentially, an ARPG that allows for pick-up-and-play sessions.

Related to the above, Thing Trunk also consider Book of Demons (and upcoming titles) as “mid-core” games. You can tweak the difficulty and play session to suit the tastes of the hardcore crowd or make it so that a casual gamer friend would also enjoy it. Diablo might be too mainstream for some, while Path of Exile is too complicated for others. Book of Demons offers a healthy middle ground. 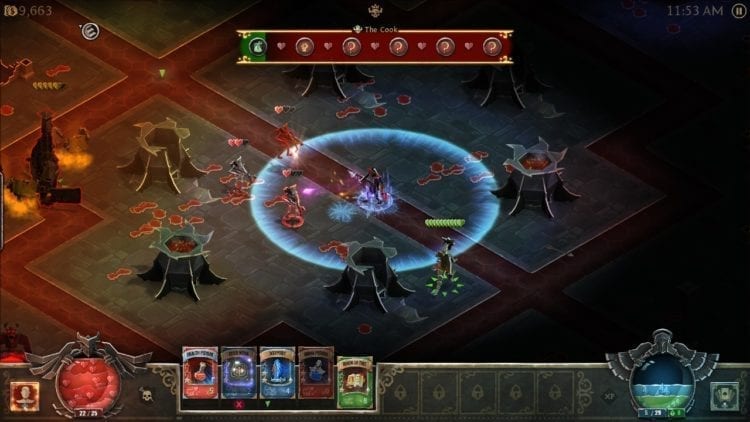 Movement by way of lanes.

Given than Thing Trunk is comprised of only seven developers, it’s obvious that Book of Demons focuses more on simplicity. In some ways, simplicity also adds to the charm. One can compare it to a Paper Mario-esque presentation since the entire game takes place in the “Paperverse” — basically a pop-up book. The graphics are rendered in 2D, although the isometric perspective renders it almost like 2.5D in a way.

Movement in each dungeon tileset is done via lanes or corridors. You can’t move anywhere else besides the existing lanes. You can, however, interact with objects in the background by clicking on them. Perhaps it is also this simplicity which makes Book of Demons challenging by default. It’s because of how the dungeon design and controls are laid out. When you cannot move anywhere besides the existing pathways, you’d be hardpressed to avoid incoming fire.

I can’t count the number of times the game suddenly turned into a “bullet hell” shoot ’em up (shmup) when dozens of mobs started throwing those fireballs and arrows my way. I often found myself having to backtrack just to keep out of range of skeleton archers. Since the only way is forward, I simply had to run into foes and make sure I had enough charges on my potion left. 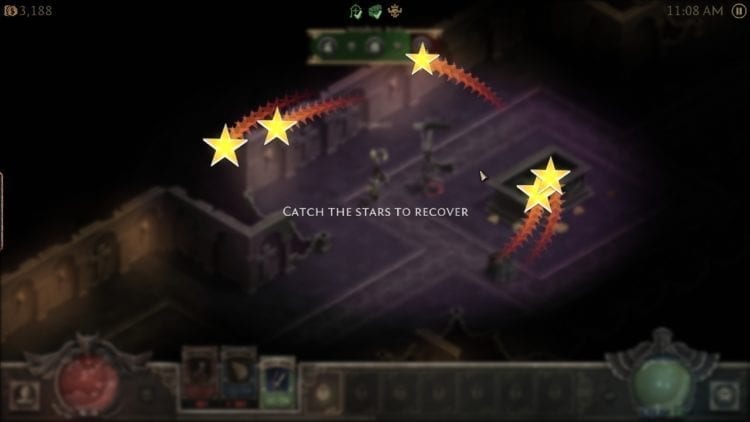 Catch a falling star and put it in your pocket because you forgot to dodge a falling rock.

To attack enemies, you’ll need to click-hold with the mouse (right trigger with an Xbox gamepad). If enemies are shielded, you’ll need to specifically click on the shields until they break (or rapidly press B on a gamepad). If enemies are immune, you can also click-hold on the icons (or hold B) to dispel this buff. The same goes when you’re poisoned where you’ll need to click when the health panel flashes to remove the effect. Lastly, when you get stunned, mousing over the stars circling around the screen negates it.

Combat is fairly simple if a bit mundane, punctuated only by random enemy effects which you’ll need to adapt to, as well as whenever your own cards are off-cooldown and are usable once more. While using a gamepad, I basically just held down the right trigger button whenever I moved to auto-attack and kill everything on sight, while summoning a golem or blasting foes with a meteor. It can get repetitive but the challenge does exist for those willing to give it a try. 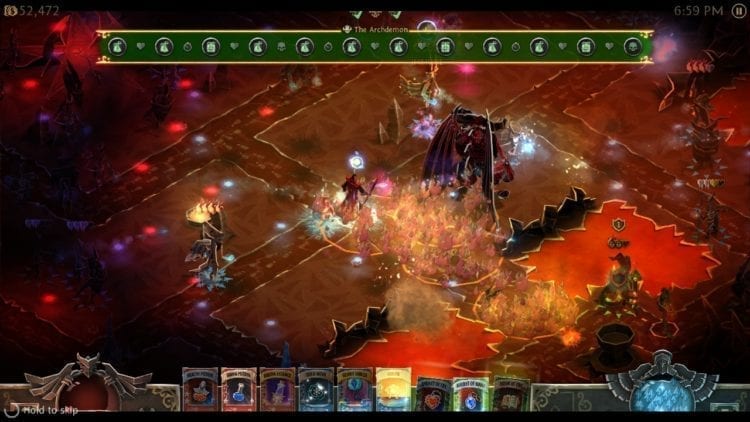 Throughout your adventures, you’re aided by a quirky band of townsfolk from a flirty barmaid, a shady healer, a fortune teller, and an old man. They offer services such as card upgrades/recharges, a bestiary to look at, and even a Magic Cauldron which adds bonuses to your health and mana.

I finished the main campaign in roughly six hours. Along the way, I encountered a handful of the usual dark fantasy tropes from skeletons, gargoyles, goatmen, evil spirits, and the like. The first boss, The Cook, is reminiscent of The Butcher. It even yells out, “Fresh treat!” for giggles. The end of the campaign pits you against The Archdemon — the Diablo of the story — complete with a visit from a random Archangel. That’s when all hell (pun intended) breaks loose, given all the random effects happening all at once.

Once you’re done, the townsfolk even break into a rendition of “I Need A Hero” from Bonnie Tyler before jiving to a catchy theme song of “Sha-la-la-la, Die Demons Die.” That’s when Freeplay Mode opens up.

Freeplay Mode simply has you select a particular tileset that you’d like, and then use Flexiscope to tune your adventure length. From there, you’ll just have to go from room to room, deeper and deeper, to acquire more cards, HP/mana bonuses, and achievements that you weren’t able to obtain during the campaign. 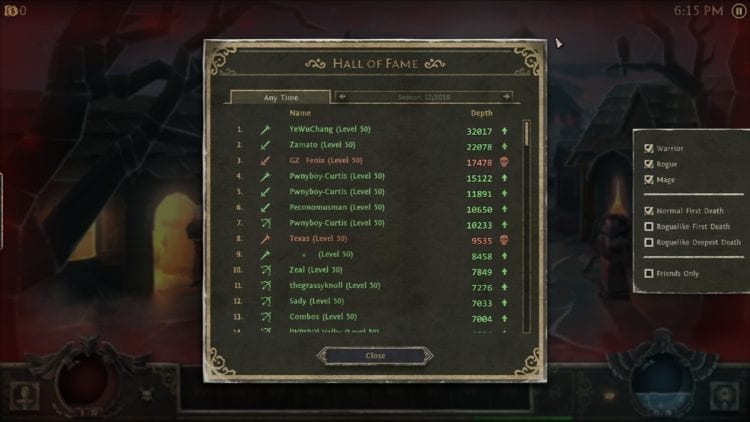 For the most part, it’s an endless romp of sorts, only limited by the variations of enemies and a definite goal in mind. An additional objective you could have is to simply earn a place on the leaderboards which shows how far your character has come before dying.

You could also choose to try out the newly-added Twitch and Mixer integration if you like to stream games. Your viewers could enter commands to spawn enemies to hinder your progress. They could even help you out if needed.

Book of Demons: The Final Verdict 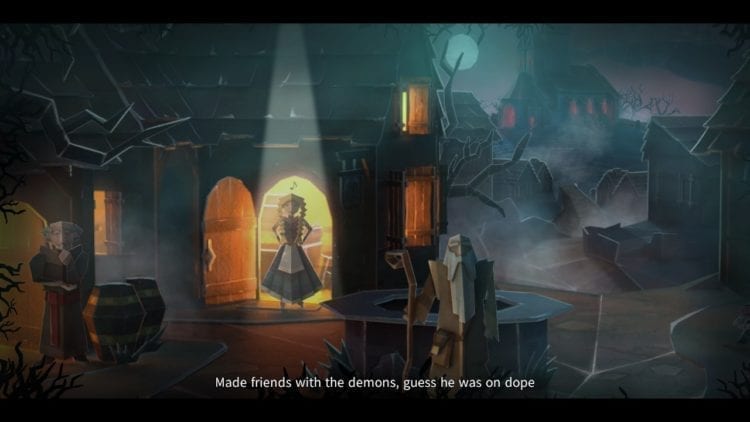 “Kill those demons but leave their private parts… for potions, of course!”

Book of Demons offers a blend of old-school Diablo ARPG goodness with a mix of quirkiness and humor. You’re provided as much control as possible on how you’d want to approach the game with the Flexiscope feature. The deck-building/card mechanics are also uniquely engaging.

Unfortunately, it also suffers from having a rather limited story campaign, that is, unless you want to tweak Flexiscope to have 30-minute long dungeon runs per section. Combat, by way of moving back and forth lanes and endless clicking, also does become repetitive after some time. There’s really not a whole lot to do in Freeplay Mode besides just trekking down a dungeon’s depths to find more cards or the runes to upgrade them with. That, or see yourself in the leaderboards. There’s a slim chance since thousands have been playing the game for the past two years).

Still, one can recognize the amount of effort that a small studio had put into Book of Demons. Likewise, their “Return 2 Games” series is as ambitious as it gets. The series will create their unique rendition of classic 90s games. Book of Demons — an ode to Diablo — is just the first of seven offerings. Things can only get better from here on out.

Delightful, fun, quirky -- Book of Demons keeps you entertained as it provides a unique take on what Diablo and the ARPG genre provides. Unfortunately, it also becomes repetitive and aimless towards the end.