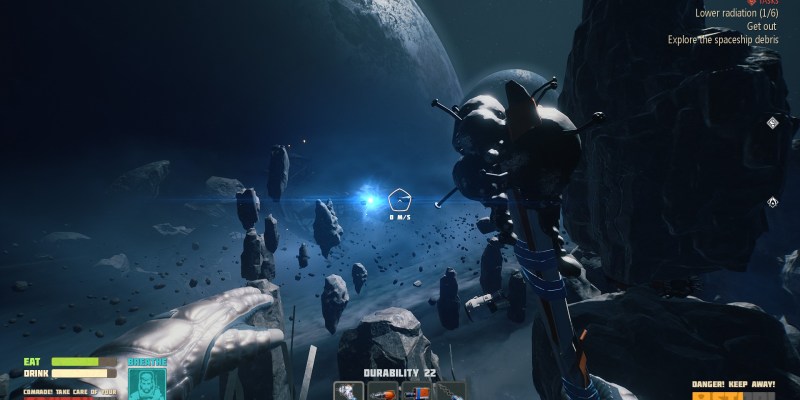 It isn’t wholly uncommon for Early Access games to begin ambitiously, only to drastically reduce scope when the finish line eventually gets crossed. Breathedge starts off strongly, albeit with problems telegraphing its mechanics and progression. The Early Access content provided a large, connected sandbox with base building and a lot to upgrade and explore. The 1.0 version launches this week with the rest of the game’s chapters, unfortunately changing gameplay genres and its focus along the way. There’s still a lot to like, but anyone who was expecting more of what made the game’s previous content so enjoyable will likely be disappointed.

Breathedge is often described as “Subnautica in space,” and that’s not wrong for the first three chapters. One of the main differences is that the story progresses in a more linear fashion and, notably, focuses on comedy instead of horror. You play as Man, whose grandfather has just passed away. While accompanying the coffin to the funeral service, however, things go screwy. Man’s ship is badly damaged and his grandfather’s coffin is sucked out into the final frontier. He’ll need to not only survive in the vacuum of space, but delve into the mysterious titular company and its army of corpse-powered coffin robots.

The narrative in Breathedge can be a bit confusing, but it is generally funny. A lot of the jokes can fall flat, but many others elicited a fair amount of laughter from me, especially during cutscenes. Man is joined by an AI known as Spacesuit and, since Man doesn’t talk, most of the game’s dialogue sees Spacesuit quipping at length. I found a lot of Spacesuit’s lines to be less funny than they could have been due to how quickly he speaks. He rattles lines off like Yahtzee but without the personality, or an overly bland auctioneer, which I feel is a missed opportunity. Instead, I lost out on a significant amount of the dialogue. At least the game stays the same level of funny in the post-Early Access stuff, regardless of how much the structure changes. 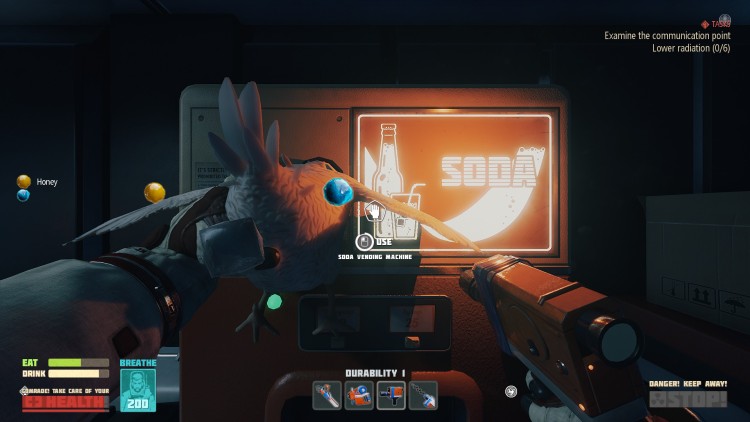 When the game first starts, you find yourself in a wrecked shuttle. You need to plug a leak with gum in the airlock and then you watch an instructional video (literally on VHS) before heading out into space. At first, you’ll only have 75 seconds worth of oxygen. You can’t last long in the vacuum, but you’ll need to gather little bits of metal to make a bludgeon for collecting more metal. Gradually, you’ll strike out and explore the surrounding area, all the while finding new materials and blueprints, followed by returning back to drop off the excess and craft new items and gear.

It’s a solid loop, but the issue is that it doesn’t explain itself well at all. It can be horribly unclear as to how you’re supposed to move forward. I appreciate the hands-off approach, but not when I feel like the only way to progress is to watch YouTube videos. However, this intro section is equal parts exhilarating and daunting. You can craft oxygen stations and refill your breath gauge with them. When you actually get to your destination, the feeling of accomplishment is notable. From there, Breathedge grows considerably. This sandbox is large and it becomes more easily manageable fairly quickly.

It doesn’t take long until you have massively extended your breath gauge and are now zipping through space on a rocket-powered vacuum cleaner. Your supplies will grow, and you even put together a base. This section is when Breathedge is at its best. Exploring the areas is fascinating and compelling. It does repeat some of the signposting issues, though. For one, the game makes no effort to explain base building beyond a brief introduction. I had to once again track down a YouTube video just to learn how to connect two modules (you need a single corridor by itself — no airlock.) I couldn’t even figure out how to get into one location because I didn’t know that I could actually swim in giant globs of mayo. Still, I relished this part of the game. And then everything I’d amassed was gone in the blink of an eye. Once you finish the Early Access portion of Breathedge, it ceases to be a space survival game. You travel around chapter four’s map in a ship, but you’re limited to shooting occasional enemies or docking at a few specific places. There is no freedom, nothing to survive, and the exploration is practically gone. Instead, you’ll run through linear corridors towards icons. The corridors are littered with items that you can pick up and carry back to your ship. If you try and pick most things up, you’ll find yourself running back and forth constantly in straight lines.

Just like the previous part, your inventory is all too small. And the game gives you far too many food and drink items. Keeping your hunger and thirst meters up is a no-brainer. Your base and everything are stuck in another map entirely. At one point, the game mocks you for thinking you can go back to it right away. Once you leave that sandbox, the rest of the game is like this, too. It’s more of a comedic walking simulator with crafting. Certain issues persist from the sandbox portion, but they’re intensified here due to the less interesting nature of running back and forth down the same corridors.

You’ll enter an area, grab resources until your inventory is full, go back to the ship to drop them off, and then press onward. Then you’ll hit the icon, realize you have to craft something, and you run all the way back to your ship’s processor to make what you need. Finally, you’ll run back and use the thing. Rinse and repeat. At the end of one of these areas, I had to run back and forth between my ship and the last area twice. It’s egregious. 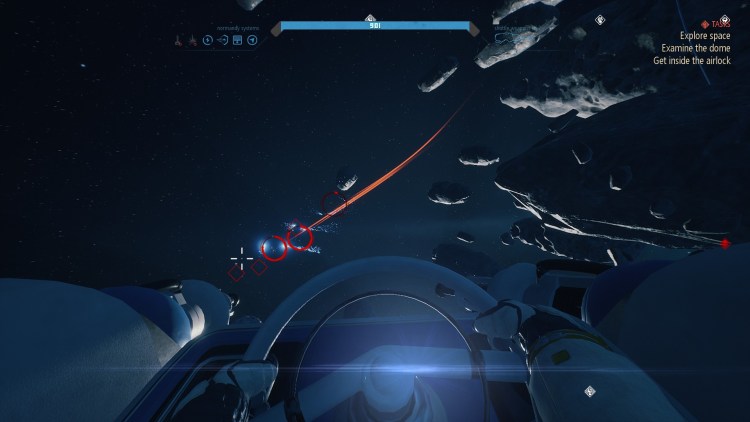 What have ye done?

The last two sections of the game are even more linear, focusing on another space station each. There are a couple of boss battles to break up the walking, but they’re punctuated by hiding behind cover while you wait for enemies to stop firing lasers at you. I was invested until the end, and Breathedge had more laughs in store. The walking simulator stuff isn’t bad by any means, it’s just a far cry from what the game does best. The sandbox section took me about 12 hours (not counting several hours of reloads) and the subsequent walking sim parts took about six.

Overall, I enjoyed Breathedge. The ending has some stylish scripted content, even if the final “boss battle” is more of an annoyance than anything. I’d also like to mention that the last section has a ton of materials to pick up for practically no good reason whatsoever. Plus, you’re so far away from your storage by then that your inventory is going to be full regardless. If the fact that the game practically abandons so much of what it accomplishes partway through doesn’t sour the entire experience for you, this is is still an enjoyable game worth playing. And you can always go back to the sandbox to keep building after the campaign is finished. Or you could have just picked the sandbox mode to begin with. 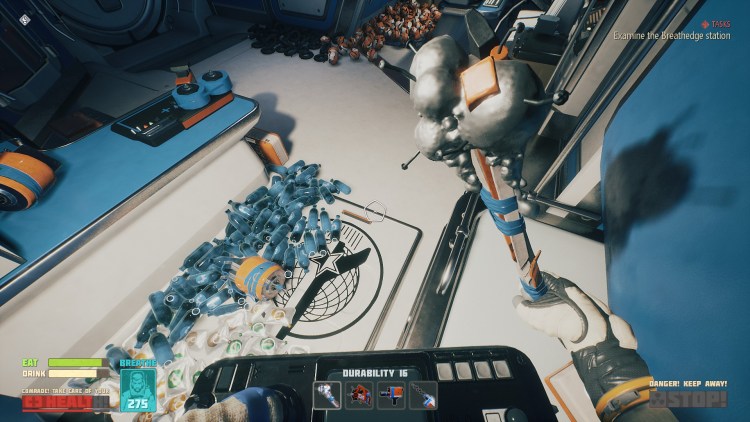 Breathedge has a lot going for it in its well-loved Early Access sandbox portion. But when it becomes more of a walking simulator, things take a turn. Regardless, it's a funny game that's still worth playing for anyone who enjoys the concept and the humor. But I can't help but think that many will be disappointed by the later parts of the game.