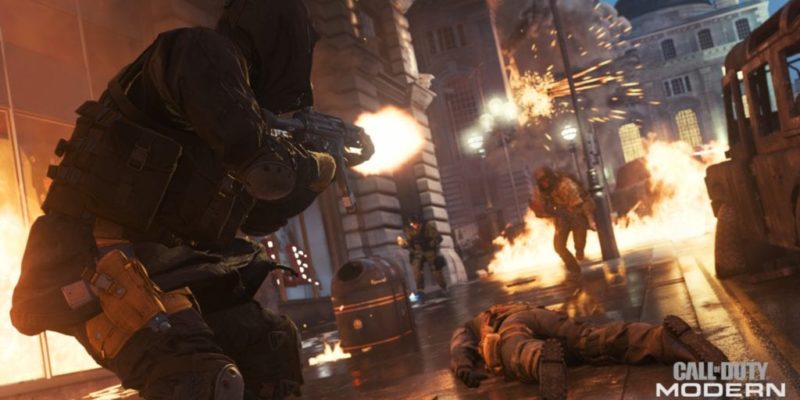 Call of Duty has always prioritized its console ports, and understandably so. PC has always felt like more of an afterthought and is often characterized by poor optimization despite its sub-par visuals. In Call of Duty: Modern Warfare, however, series mainstay Infinity Ward set out to craft the most realistic war game on the market for its PC players — and it did just that.

Holy moly, this game looks incredible — if you’ve got the space to keep it. Perhaps Modern Warfare should have included a hard drive as a preorder bonus, as it requires a massive 175 GB of free hard drive space to download (over double what the previous release required). Regardless, how will the PC port of Modern Warfare run on your machine? 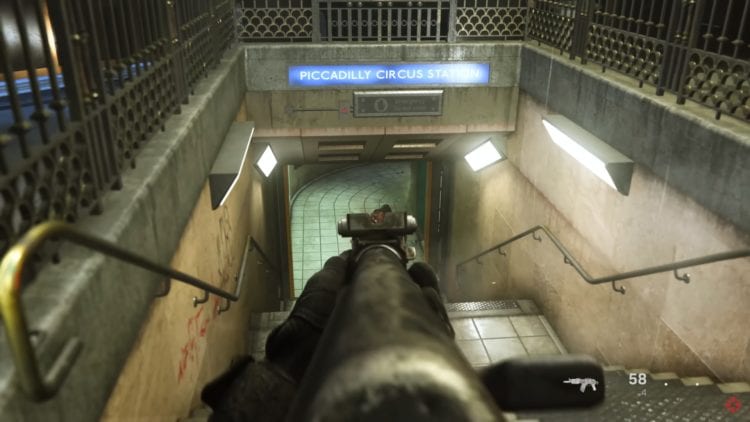 Here are Recommended Specs to run at 60 FPS in most situations with all options set to medium:

Here are the Competitive specs to run at a high FPS for use with a high-refresh monitor:

The minimum required specs of Modern Warfare are incredibly forgiving, requiring a setup straight out of 2012 to run. What this points to is Modern Warfare‘s incredible optimization, which we’ll get back to in a bit.

This Activision blog post offers a few additional configurations for those who want to experience the game with ray tracing enabled, but for now let’s take a look at the “vanilla” Modern Warfare experience, and boy is there a lot to look at. 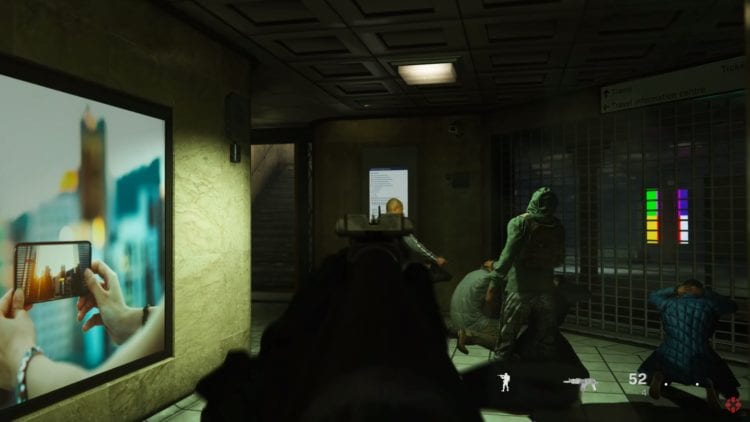 Infinity Ward truly pulled out all the stops when it came to the PC port of Modern Warfare, including a head-spinning amount of customization options. 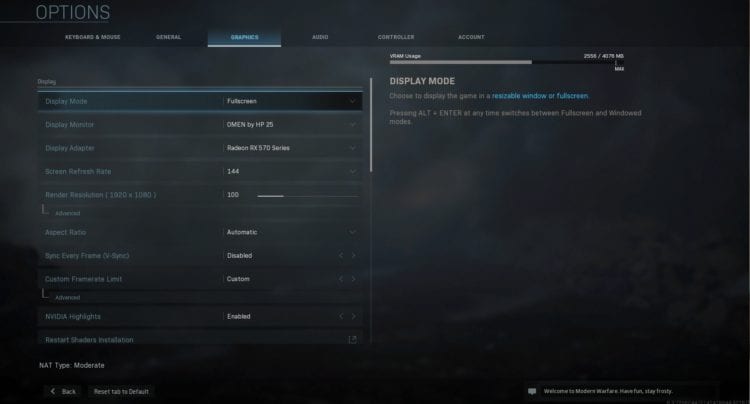 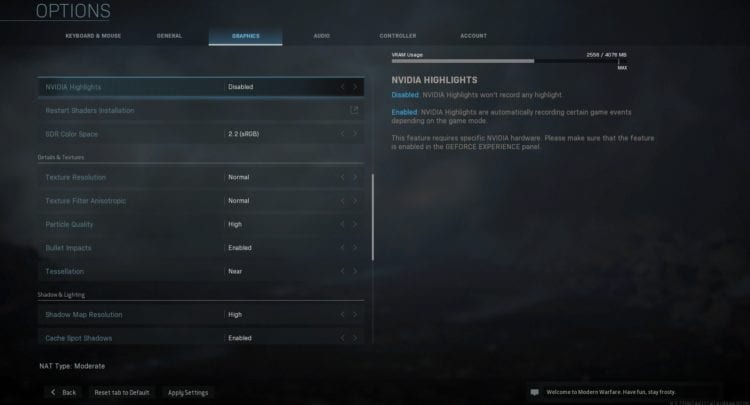 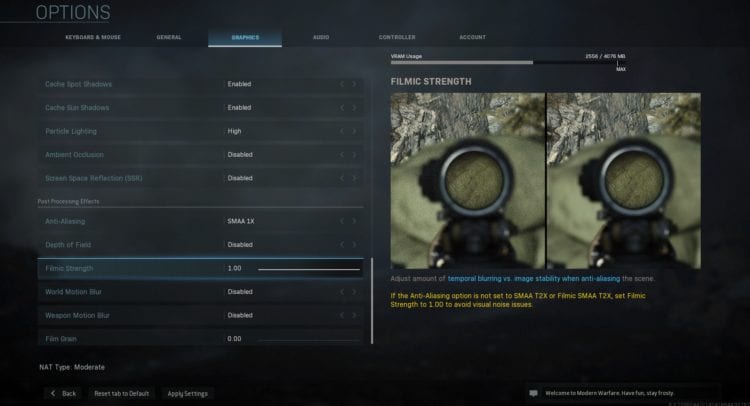 Filmic strength supposedly alleviates the fuzzy textures when no antialiasing is present, but I found that disabling depth of field works the same.

Frame rates are unexpectedly solid. I admit that my PC isn’t what it used to be, particularly being bottlenecked by the 4 GB frame buffer on my RX 570. Nevertheless, I was able to consistently hit a frame rate between 80-110 during the campaign, and consistently over 70 during multiplayer. This is with a mix of normal/high settings. This is much better performance than I saw with similar settings in Black Ops 4 and is similar to that of WWII a few years back.

Even with the highest graphical settings enabled (minus antialiasing), I was able to consistently hit 60 FPS in the campaign. Color me impressed. 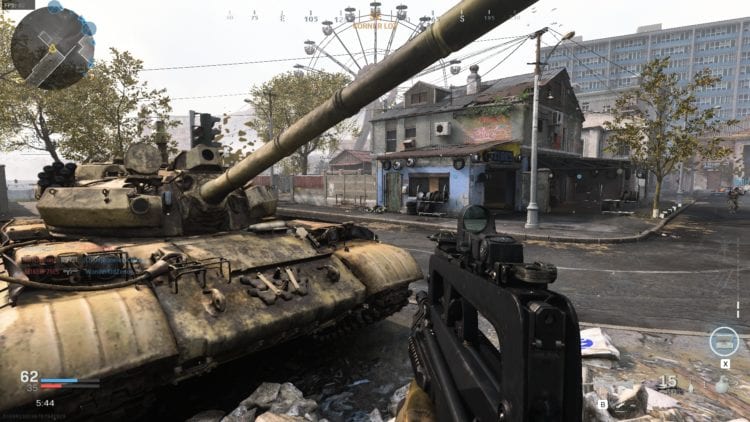 Low graphics settings make the textures on this tank look bland; let’s spruce them up! 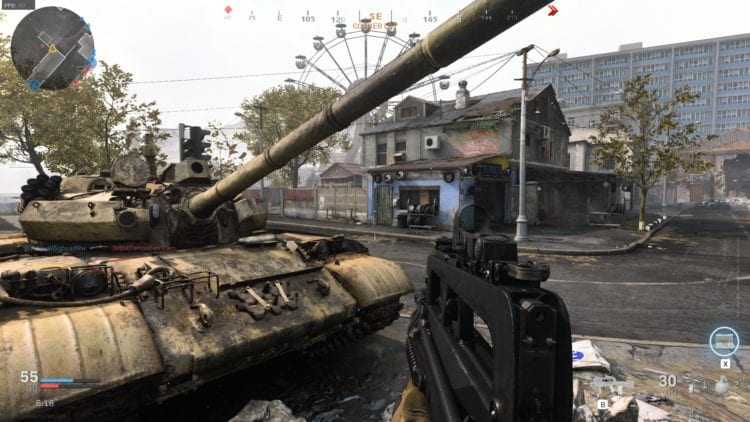 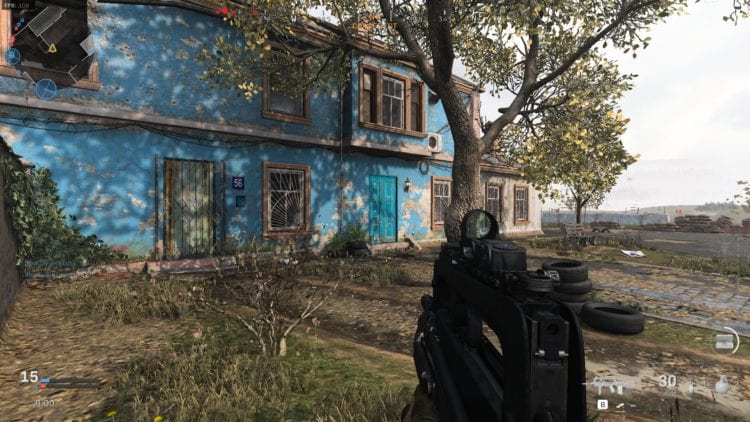 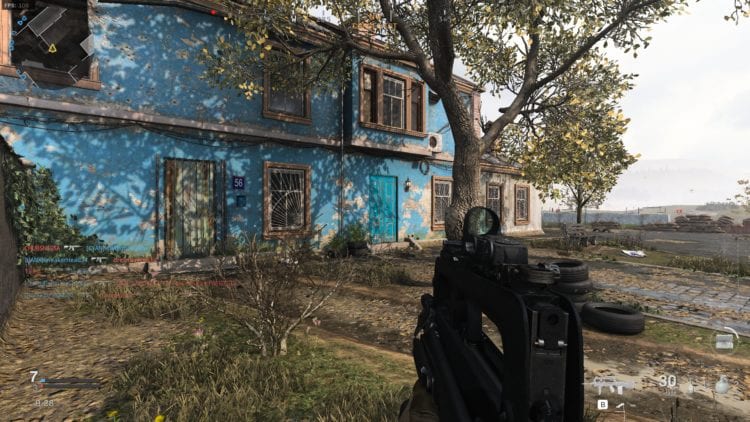 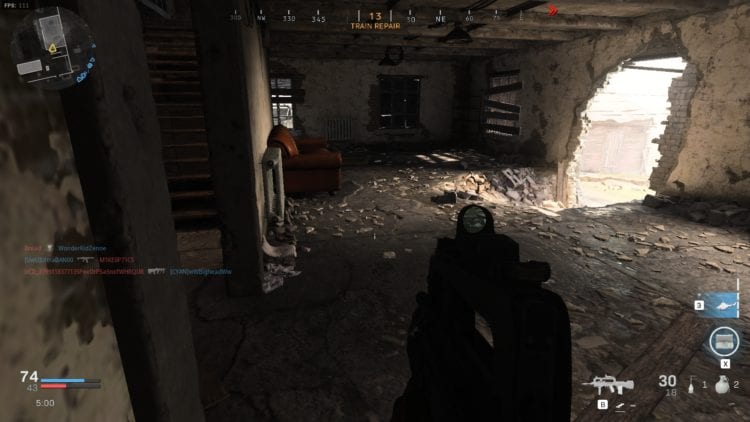 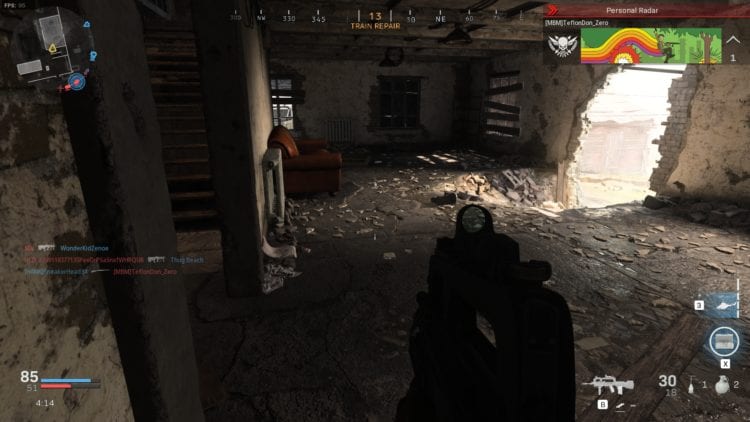 high settings (this screenshot resulted in a crash somehow) 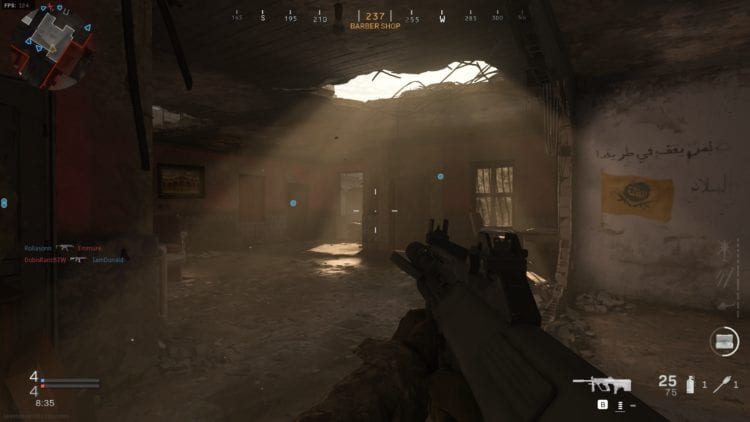 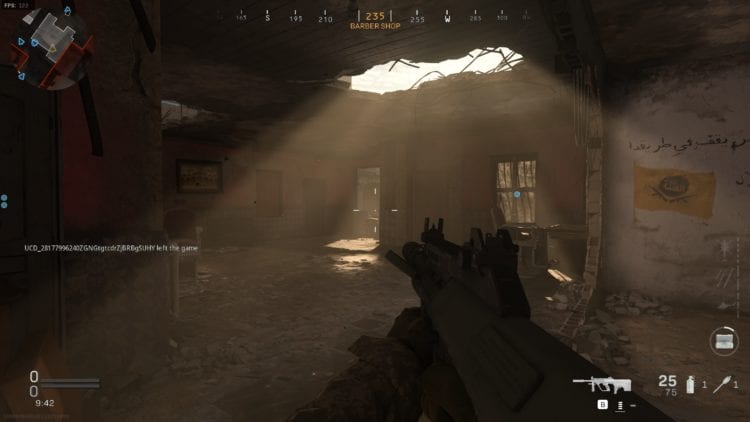 Modern Warfare is a typical first-person shooter: WASD to move, Shift to sprint, R to reload, and so forth. Although if you’re feeling a bit adventurous, Infinity Ward has given you the option to remap everything to your desire. Yes, I prefer using the mouse wheel to jump — sue me. 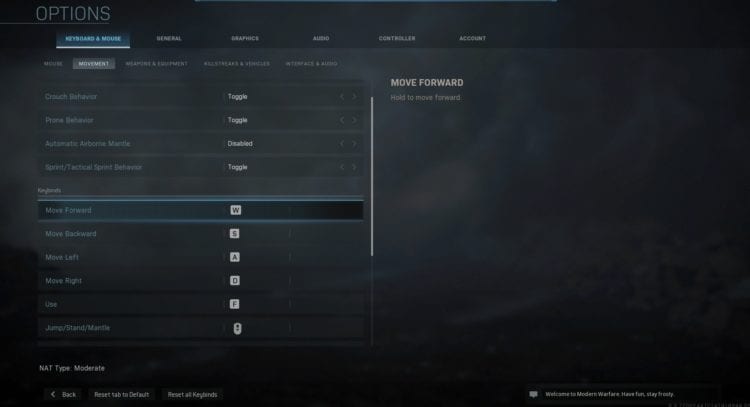 Nothing special here, but that’s exactly how it should be 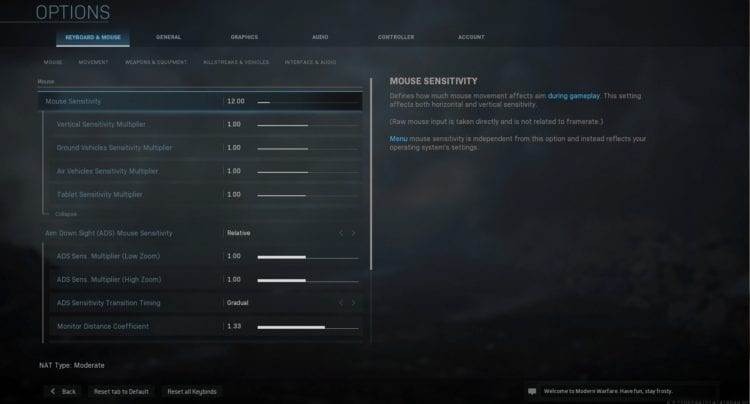 Mouse settings will allow you to adjust every aspect of your aim.

Fortunately, controller users will no longer be at a competitive disadvantage with the addition of crossplay. Opting in to the crossplay feature in Modern Warfare allows console and PC players to live in harmony, matching players together based on their preferred input device. This means that players using mouse and keyboard will be matched against other mouse and keyboard players, and the same with controller, regardless of platform. 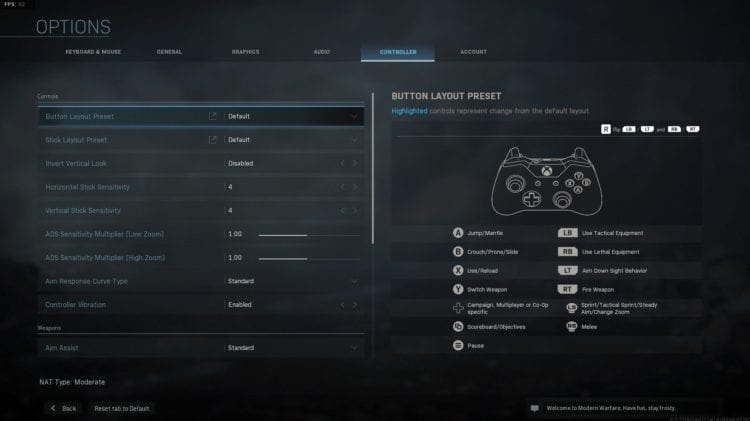 All the essentially controller options are here such as layout and button remapping. 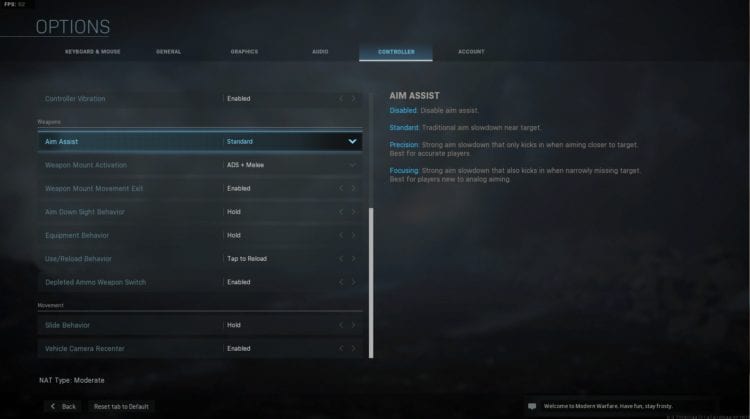 Even adjust your aim assist if you need it (don’t be ashamed).

A match made in heaven

Matchmaking in Modern Warfare is seamless. Granted, there were a few bugs with the servers upon launch, but that’s to be expected from a game with this much hype. Sharing servers among PS4, Xbox One, and PC allows for instantaneous matchmaking and has me wondering why we’re only just now thinking of this stuff. PC purists can also choose to ignore console players altogether by disabling crossplay. 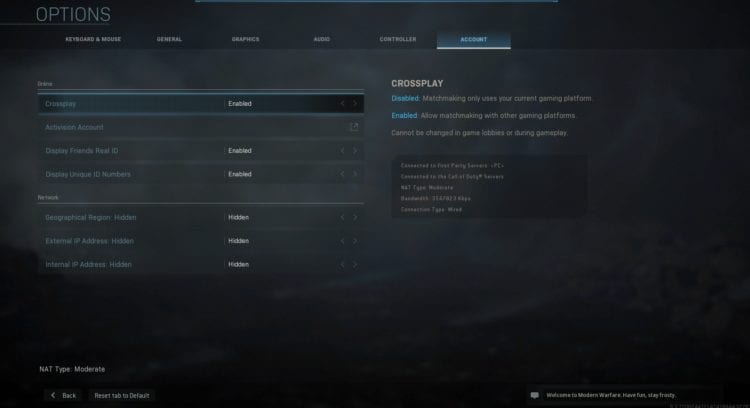 No crossplay, no problem

The cut scenes during Modern Warfare‘s campaign are plagued with a nasty frame rate issue that reduces the game to little more than a slideshow. Just prior to writing this I actually had one freeze so long I thought the game had crashed, the result of which was a lip syncing nightmare. It doesn’t appear that changing any graphics settings resolves this issue, but patch 1.04 may rectify this.

Other than that, I’m genuinely surprised by how solid the performance of Modern Warfare is, with my 5+ hours of gameplay resulting in only a few crashes (turns out I needed to install the beta version of my GPU driver). There also appear to be crashes in multiplayer that are linked to exceeding GPU memory, so keep that in mind, fellow 4 GB GPU owners.

There have additionally been some complaints about “shadow noise” appearing around certain textures, but turning off Depth of Field appears to alleviate the issue. 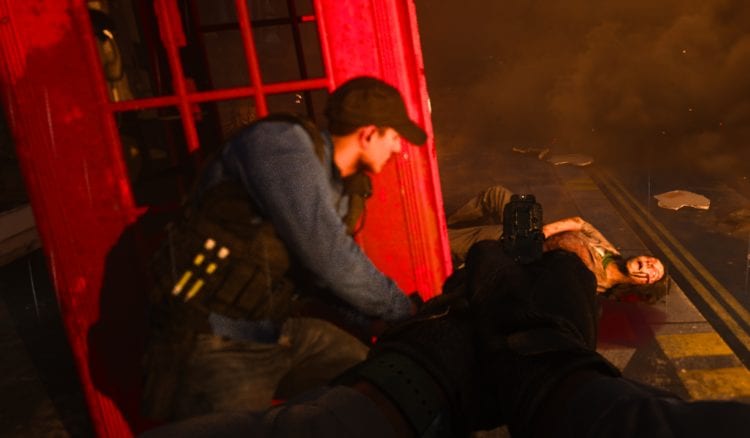 Call of Duty: Modern Warfare propels the series into the next generation with stunning visuals and groundbreaking features like crossplay. With rock-solid optimization in both campaign and multiplayer, even the most modest systems should be enough to help you relive the good old days of Call of Duty in stunning fashion. Infinity Ward has clearly prioritized their PC release with Modern Warfare, and it shows.

Here’s a bit of 4K gameplay featuring ray-tracing, for those of you who want to see Modern Warfare in all of its glory.

Afterparty review – Best friends partying their way through the afterlife