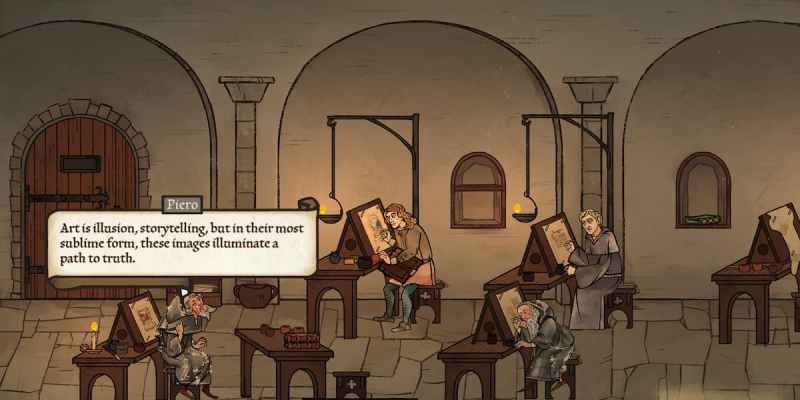 Obsidian’s historical narrative adventure game Pentiment just came out today, and its reception has turned out quite positive so far. The game has earned a respectable 87 Metascore on Metacritic, and although it only received more than 30 user reviews on Steam as of this writing, they have trended in an overall positive direction. Many will no doubt become interested in Pentiment because of this, and since the game has a fairly relaxed pace the whole way through, certain players will definitely want to try Pentiment out on the Steam Deck while they cozy up in bed. But that begs the question: can players experience Pentiment on Valve’s new handheld PC?

Fortunately, Valve has placed Pentiment in its list of Steam Deck-verified games, so players should have little trouble booting it up on that device. Additionally, since Pentiment boasts a simple 2D aesthetic with barely any intensive graphical effects to speak of, that should make running it on the Steam Deck even more of a cakewalk. As for controls, the game only requires basic button and movement controls to play, so you do not need the Steam Deck’s trackpads for any specific actions.

Is there a catch?

Where playing on Steam Deck might present a bit of an issue lies in the game’s text and dialogue. By default, Pentiment features fairly small, stylized text that some players may find challenging to read on the Steam Deck’s screen. Fortunately, Obsidian implemented an Easy Read accessibility feature that allows players to tweak the game’s text fonts to their liking.

If you own a Steam Deck and want an excuse to sit down with it and relax with a relatively stress-free experience, then you could do a lot worse than pick up Pentiment. Considering the game’s positive reception and undemanding specs and gameplay, it’s very likely that Steam Deck players will have a good time with it.

By Chirag Pattni19 hours ago
Guides