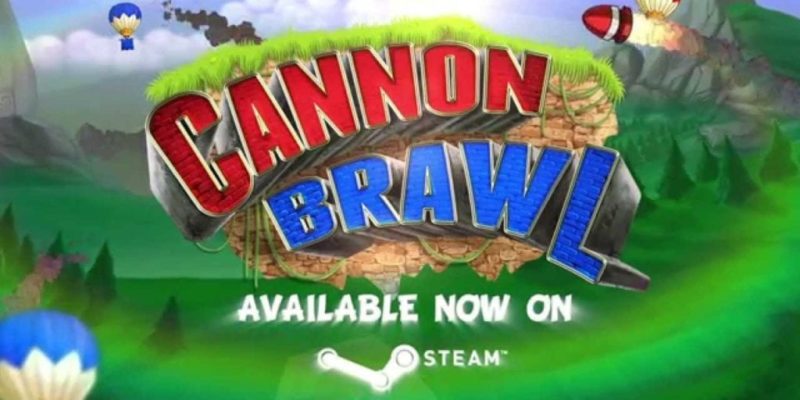 The RTS (real-time-strategy) genre wears many hats. One might be fitted for orc slaying, the other stitched for thwarting waves of an alien army. The one thing that they all have in common is the impulse or strategic planning it takes in order to turn a dire situation into a triumphant victory. If Cannon Brawl were any one of those headpieces, it would probably be made of balloons, gunpowder, and stitched with tongue-in-cheek.

It is hard not to look at Cannon Brawl and think that it could easily be ported over to the mobile platform. The game hosts a bright, vivid, and easily digestible color palette. This isn’t necessarily a bad thing, considering that the game is accessible through PC/Mac via Steam and could be highly successful on mobile devices. In reality, the game is a mobile title on the PC gaming platform. I am curious as to how the XP and purchasing of towers, objects, and various other characters will would lay out on mobile devices, yet still keep balancing intact, while avoiding the “pay-to-win” structure.

Most RTS games feature some sort of cool-down mechanic when either attacking or building structures. This is what introduces the strategy aspect to the game, leaving players to pick and choose their battle wisely. This can either spread victory throughout the lands or leave your people to suffer under the oppressive ways of the gun. Cannons, walking bombs, and missiles are among the death devices available for purchase. These are mostly used as offensive towers but can also play other roles in development your war plan. Defensive mechanisms include satellites that can be upgraded for stronger repellent powers and a bank. Yes, a bank.

In essence, the majority of the game is based off of map control. The central focus of each map is the minerals/mining/resources. There are diamonds and gold situated on hills and elevated plots of land. In order to reach these, you must expand your territory with the use of balloons, but to get balloons, you must have resources. Using the funds made by mining the resources will allow you to purchase new additions to your army. A rather intricate catch-22, so to speak. Luckily, the level starts you out with enough funds to make some strategic moves to start. It then becomes your task to grow and defeat the enemy’s HQ. The variety and challenge in gameplay comes in the form of new weaponry and enemy abilities.

Surprisingly enough, there are plenty of ways in which to play. One can enter the field with no defense and simply just blast away until your opponents army has been blown into the ocean — there’s actually a challenge for that. Other times, you can assess the map before the round begins to choose what and who will be maintaining your battlefield.

Each character has different abilities that contribute to your tactics. For example, if there are tons of minerals to be found, you might choose the Driller, who has the ability to do a drill blast every sixty seconds. She can blast to the diamonds below the surface or even drop an opponent’s cannon, skating on thin dirt. The initial player you are given, the Princess, allows for cool-down times to be fifteen percent shorter. When a large squadron of unrelenting blasts or protection is needed to be maintained, she is the right person for the job. The other main character you might use is the Prince, which delivers six HP every ten seconds. Gamers may lump them into such classes as the medic, heavy artillery, or even rogue using his speed. More are unlocked through the game but these are the three that will start your journey.

There are multiple characters to unlock. Each has their own given ability, which can tie into your battle plan.

The levels range from the normal “conquer the opponent’s base” gameplay to puzzle levels. The puzzle levels challenge players to use their learned skillset in order to defeat the enemy with the given set of rules. Sometimes, it is using only two shots available; other times, one must simply survive the onslaught of missiles, bombs, and even warheads heading in your general direction. All of these may cripple the nice array of shields you just purchased, so using your funds and resources wisely can easily translate into the real game. The puzzle levels become more of lessons adding value to tactics.

The only gripes that I have about the game are very small. I would have like to see a few more options to change graphics settings on the fly. After using the controller to navigate the game, I decided to go and try the mouse/keyboard combo. Browsing through the menus could be done a bit easier having mouse support, which doesn’t exist for a PC game.

Overall, the experience of Cannon Brawl is very fun. I found humor in the dialogue and addiction in the strategic gameplay. There are plenty of unlockables, whether it be characters, puzzles, or buildings to be found in your armory. The online multiplayer enough to keep you tied up in the arms of battle for either local AI or a human being. The game hosts a fluffy cartoon-like art style, which is palatable and fun. There are tons of weaponry and even a giant robot to smash your buildings to smithereens. The difficulty can range from easy to challenging.

After completing the game, the “Nightmare Mode” will open up and give you some true diversity ahead. The map structure changes, offering more than just the single campaign playthrough.

One could easily make it through the entire Adventure Mode in a single sitting. However, the challenges of another human being vary from that of just the AI. Matchmaking is rather swift as there has been consistency in the amount of players online at a given time.

The online multiplayer delivers high replay value, as there is nothing more challenging than facing off against another person who is looking to crush your castle and not just some meddling evil sorcerer brother.

By Blake Grundman14 hours ago
Reviews

By Steven Wong15 hours ago
Reviews