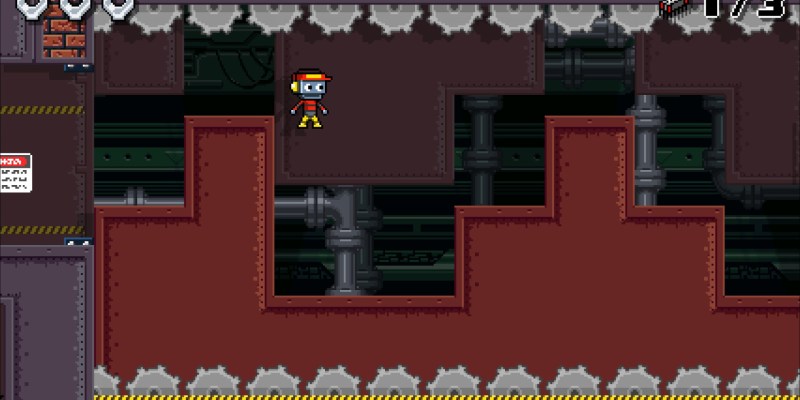 I mostly skipped out on ’90s PC-only platformers. CARL shares a lot of visual similarities to classic games, using a style and level design approach that was more common on DOS than anywhere else. But the game isn’t overly beholden to the past or lacking in ideas. This is a cute, well-designed platformer with excellent controls and one of the best finales a 2D game can ask for. It doesn’t last all that long but it’s mostly a blast from start to finish, even if a couple of late-game levels majorly got on my nerves.

In case it isn’t obvious, CARL is also the name of the player character. You’re a little robot (every robot in the game has a regular game that’s also an acronym). There’s also a doctor who goes by Doc, because the acronym from his actual name is FART. Then there’s a “robot” named DOUG who’s clearly a human wearing cardboard. The game is undeniably silly, but the dialogue is humorous and the story is interesting enough for what it is. CARL is aided by a scientist who formerly worked for the villain, a man named Kent who lost his mind and now aims for world domination.

To stop him, CARL lands in a garbage dump beneath Kent’s building. This dump is inhabited by all sorts of robots and acts as the game’s hub. You’ll find Doc’s clinic, where you can purchase upgrades for CARL himself, military bots that sell weapon upgrades, a fortune teller called MADAM that will tell you where to go, and a bar where you can play arcade games you find in the levels. One is a parody of Arkanoid that needed some more testing, as the paddle moves too slowly and it’s easy to get the ball completely stuck between the paddle and wall.

The hub is connected to four areas that have five levels each, the last of which is always a boss fight. Your goal in each level is to find the three chips scattered about and then step onto the elevator that leads back to the hub. Levels also have medals that let you purchase weapon upgrades, blueprints that unlock upgrades for CARL, CDs that grant you new tracks for the bar’s jukebox, and a bonus chip. There are 71 chips in all to find. To unlock each level, you have to have found enough chips, which is indicated on each level’s elevator.

The game is predominately a platformer. By default, CARL is equipped with a laser of some sort. Later, you’ll be able to purchase more types of arms, including a scattergun and rockets. CARL fires quickly and he’ll do battle against enemies in the levels. Defeated enemies drop scrap that you can use in conjunction with medals and blueprints to get upgrades. CARL can also jump, naturally. After defeating each boss, CARL gets a new ability that allows him to reach places in the hub that he couldn’t before, which grants access to a new set of levels.

The first of these is a double jump, but you’ll also find a dash and a stomp move, all of which can be powered up by finding blueprints. I wasn’t expecting CARL to control as well as it does, but the little guy has plenty of momentum and the jumping feels fantastic. Once you’ve acquired all his abilities, he becomes astoundingly mobile. Getting around an absolute joy. Between having extra jumps and the way that the dash covers lots of ground and lets you rocket off to the side even in mid air, you have a great deal of control.

The level design in CARL is mostly based on hitting switches to open up new pathways that allow you to thoroughly explore the levels. The design is mostly exactly what it needs to be, as the levels are all memorable and enjoyable to navigate. Different level sets have their own gimmicks. The third set is in the dark and requires CARL to navigate around a larger robot that patrols the levels. Touching it will result in instant death. The last level set even has sections where you have to play around with gravity by shooting switches. I did find a spot in one of these that caused me to get stuck, requiring a hard reset.

While I did like the levels here, one of them was honestly quite awful. It requires you to simultaneously control CARL alongside his buddy bot and have the two navigate a series of hazards. It’s a short level, but it’s easy for CARL and the bot to switch places, which will usually result in the controls getting even more confusing before you die. You have to figure out an extremely rigid way through the level, as making the slightest mistake will require you to start over. It’s the worst part of the game.

The boss battles are also quite good, albeit often extremely easy. I’m not sure if it’s because I tended to use the rockets, but they made short work of bosses. I died once or twice to the first boss and then never died to one again. One of the biggest treats CARL offers, though, is the finale. It features some epic visuals and an extremely unique setpiece that kind of blew me away. There’s even a car chase sequence that looks and plays totally different from the rest of the game.

CARL does have some issues with that one level, the easy bosses, and some of the bugginess I mentioned, but I had a great time with it overall. It’s charming and the movement is so fluid that it’s easy to go back and hunt for more hidden items just to play around with it more. It’ll take most players four to five hours to get through. But it’s well worth a playthrough or two, especially if post-release patches improve some of the more problematic aspects. If you want a 2D platformer that’s a little different than usual, then CARL makes for a great option.

CARL is a charming platformer with top-tier controls and one of the best finales you can find in a game like this.

Vampire Survivors gets a 1.0 release date for late October with a ‘major content update’