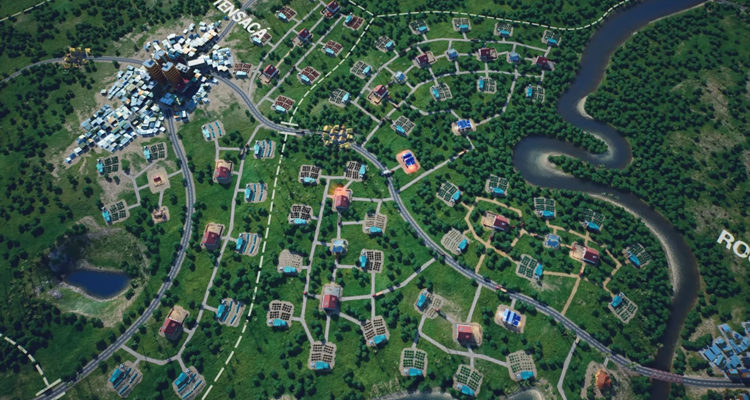 They say to get rich or die trying, and Cartel Tycoon is a game that truly lives by that mantra. It’s one of the more unique spins on the tycoon genre as far as the theme goes, but don’t let that fool you into thinking this is an action-adventure full of shootouts and Narcos-lifestyle glorification. It certainly follows the themes and offers some fun tie-ins to the genre, but management is key in this game and that’s what you should expect from the gameplay. Cartel Tycoon was first revealed during Summer Game Fest 2020 along with a playable demo, but now that the game is in Early Access, is it worth it?

To answer that question we must first travel back to June when we originally previewed the game. We found Cartel Tycoon to be a trial-and-error affair that certainly takes time and patience to get the hang of. It’s all about balancing your operational supply chains. You also need to avoid the attention of the police while paying off anyone else that sticks their nose in your business. It wouldn’t be a cartel game either without rival organizations to compete against. Essentially, all of the elements are there to produce an authentic drug smuggling experience. However, the game feels like it misses the mark for its full potential for several key reasons.

The most glaring issue still with Cartel Tycoon is its lack of accessibility. There’s very little in the way of guided tutorials to help get you started as a narcotics producer. The developers simply drop you in and begin to throw objectives and quests at you. There is a help icon in the top left corner of the screen, but it just provides brief text explanations of how to do basic things while throwing in some screenshots along the way. There’s definitely some good info in there, but I had to struggle through the unexplained user interface and make sense of extensive rules and methods for establishing a proper operation. I haven’t struggled to understand a game this much since I tried the Total War series. If time and patience are on your side, you’ll definitely figure things out, but the developers might want to add some guided tutorials for those of us who just want to start playing it right. 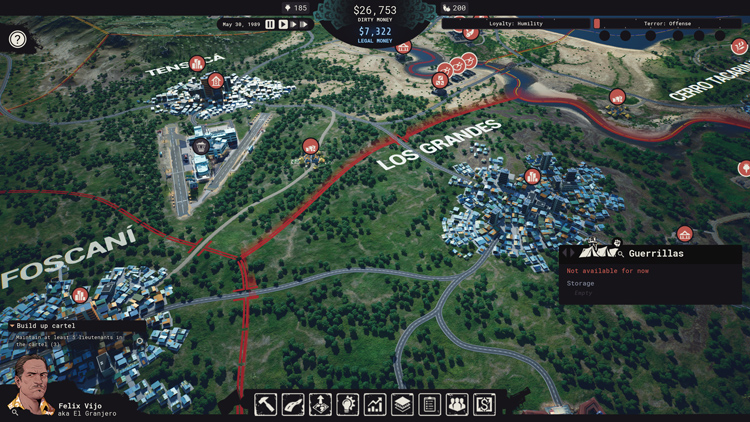 Once the drugs start flowing though, you do get a sense of satisfaction in managing your resources. You have to see the product through from start to finish. That means growing it on a farm, setting up nearby warehouses to store raw product, assigning workshops to package things up, and the list goes on from there in a genuinely nice degree of detail. This is where the game definitely gets resources right. It’s not hard to make the drugs, but you have to get them to the customers efficiently. However, once you get you money, then you get the power.

Just like with any great cartel, you need to own plenty of front businesses to launder your money. Equally important are the deals you make with city mayors and government officials to keep the federals and military off your tail. You start out as a local mayor in control of a city. Control grants access to all kinds of options for building things like hospitals, churches, research stations, and the mentioned laundering businesses. You will gain special perks and loyalty from creating these things, which all factor in to your capabilities and powerbase as you grow. Another thing you will need is a residence to perform tasks like hiring lieutenants, who can perform all manors of tasks like takeovers, dirty money transfers, and passive abilities. The latter is particularly beneficial for the adept multitasker, but it will take time to master.

Don’t get too attached to being the man in charge though, because you can easily get knocked off by one of your own guys if you run out of legit money or piss off the wrong government official. Should you end up as a dead Capo (boss), the game keeps going though. You just promote one of your lieutenants to inherit the cartel and this can actually work to your advantage when things get tough. Once the boss is dead, your Terror level (or law-enforcement heat level) can drop off and slow the pacing back down again. You might also get a fresh cash infusion from your new Capo’s secret stash. Oh yes, this game nails the reality of things quite well when it comes to business. 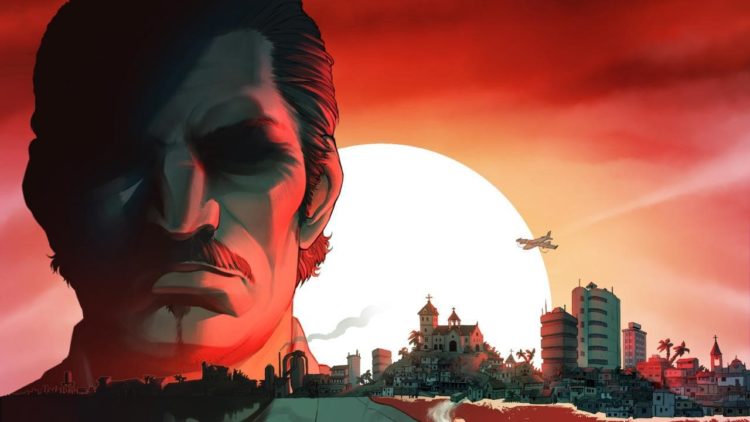 This is my city, unless the police show up

Unfortunately, it doesn’t nail the sense of competition against rival cartels as far as I could tell. The hostile territories are actually quite passive unless a questline triggers specific obstacles to arise. Otherwise, it’s often as simple as taking over the locations you want. It will attract some attention from the cops and increase your terror level, but once you take what you want, things can easily quiet back down again. This means you can end up with access to new places to export your products. However, claiming a new airport or shipyard doesn’t mean things are automatically easier. Passing through enemy cities with product will often see you get robbed or have to shell out a cut. That’s about it though when it comes to rivals. They just feel annoying rather than dynamic threats that are capable of striking back.

When it comes to the law enforcement faction, things are equally dull. While your rivals seem like pushovers at times, the government is always putting the smackdown on you. Shady individuals will show up to ask for bribes, but they are not really asking. Deny them, and the cops/military will eventually show up. Unfortunately, you cannot stop them. You can only avoid them or outsmart them. While I like this aspect of grabbing your illicit loot and hightailing it, it seems ridiculous you can’t fight back or stall them. 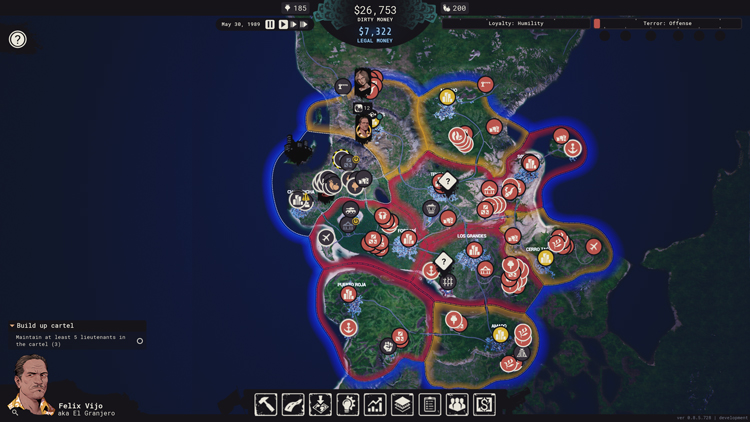 Yellow regions are owned by government mayors, while red are rival cartels.

I think going into this game, I expected to see more of a blend between the Tycoon and RTS genres. Looking at the marketing though, it’s fair to say that the developers have not tried to sell the game as such. It would have been interesting though to get into more shootouts, especially considering how chaotic the violence actually was between the cartels, police, and even the military. With that being said, the Early Access version of Cartel Tycoon often feels like more of a smuggling simulator than an actual cartel sim. Take that how you will.

As far as the differences between the demo and the Early Access version though, I just didn’t see much going on as far as features. There are some quality of life improvements like easier ways to upgrade the existing roads. There’s also the new Loyalty meter that I didn’t get a chance to fully explore. Beyond that, I believe the city mayors and their relationship perks are new. They allow you to keep the police off your back among other things. I guess the last thing I can say is that the map for the Early Access version of Cartel Tycoon is different and more populous than the demo. Though not by a huge margin. I also noticed that the soundtrack still cuts out after a period of gameplay. That needs to be fixed.

I do want to stress that this game does several things right though. Beyond the satisfying management gameplay and detailed 1980s Columbian drug cartel culture, this game looks very nice. Particularly if you can render it at higher resolutions with max settings. The performance is reasonable as well, given the scale and fidelity. It doesn’t look as good as Anno 1800, but I think it has plenty of tasteful art to make up for that shallow complaint. The characters look the part, the UI art features ’80s stuff like brick-sized cellphones, and the soundtrack (when it works) is punchy and festive.

They say that crime doesn’t pay, but in this game that expression definitely goes both ways. You will get rich and curse yourself for it before dying in tragic, mysterious circumstances. All in all, the Early Access version of Cartel Tycoon is a nice way to support the devs as they progress through development. However, it seems like this game has a ways to go. The core mechanics for empire management and drug smuggling are there, but I’m at a loss as to what kind of gameplay variety the developers intend to offer.

Right now the game only features a single mode, and there’s no multiplayer. A game about competing cartels seems like it would be a blast to play if there were a couple of human sicarios out there looking to knock you off. Another thing I don’t like to see is the mention of skins as part of a preorder bonus when there’s seemingly so much more content that needs to be implemented. I think the developers need to lay out a clear long-term road map for what we can expect, because what’s currently in the game is fun, but if what we’re seeing in Early Access is all that’s coming, players interested in playing Cartel Tycoon over the long term will be disappointed. If you’re skeptical about the final product like me, you might just want to stick with the demo for now. You can purchase the game through the official website if you’re ready to go full Escobar, though.