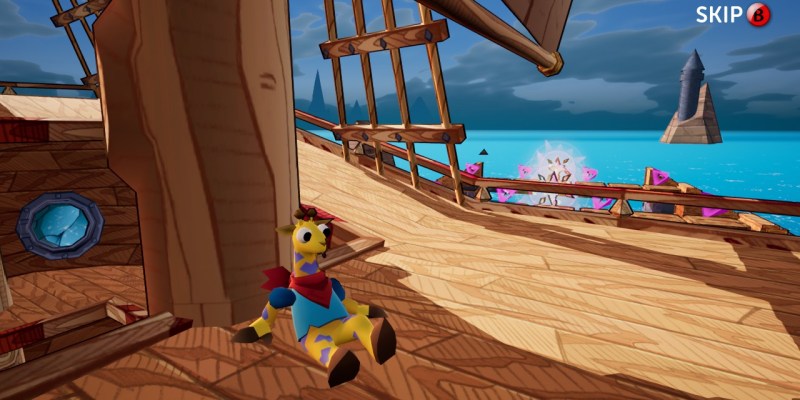 As much as I love 3D platformers, few of them truly nail the controls. Simply put, most of them can’t hold a candle to Mario, and I have long since accepted that this is a fish most developers just can’t catch. Castle on the Coast is a collectathon game mostly made by a single person. It isn’t particularly long, and the length of its individual segments is quite uneven. However, this is the closest I’ve seen a 3D platformer come to capturing the mobility-propelled bliss and whimsical level design of the genre’s best in quite some time. I wish it had more content, but I was still pretty blown away by what this game offers.

Castle on the Coast tells the story of a giraffe named George who sails to a, well, it’s in the title. George is actually the mascot for the Valley Children’s Hospital in Fresno, California. The game was made in part to be a therapeutic treatment for the kids there. Upon entering the castle, we learn that the wizard siblings, Aleandra and Vendrick, have been at odds with the adopted children they’re attempting to care for. They’ve locked off their residence at the top of the tower and forbidden anyone to enter.

One of the kids asks George to find the four keystones necessary to open the way so that they can go apologize and attempt to get on the same page. The story is fully voice-acted with copious cutscenes. Castle on the Coast has a certain low-budget charm to it, with angular character models that remind me of the Nintendo 64 era. The presentation still captures a really fantastic tone, though, making me feel an unusual childlike whimsy that I don’t see games successfully tap into all that often. Castle on the Coast has a very soft and sweet, yet defined look that makes me feel deeply nostalgic. 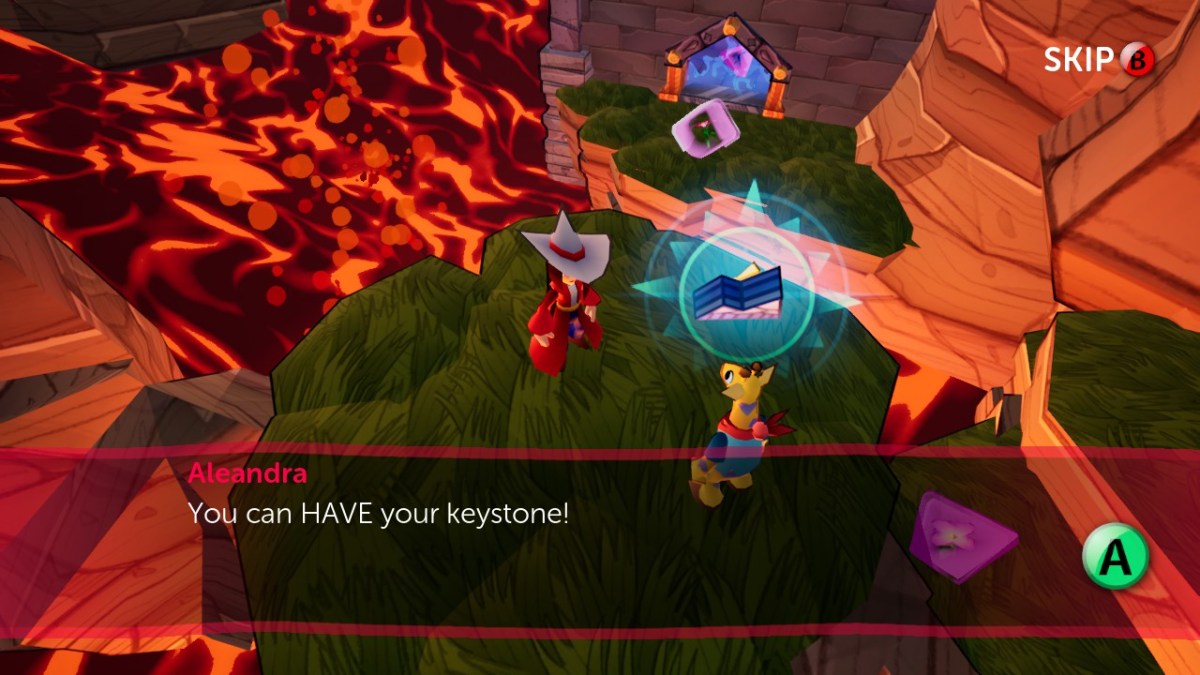 To put it simply, the controls in Castle on the Coast are wonderful. They’re extremely responsive and George, despite being a giraffe, is highly mobile. He can jump, double jump, roll much like Mario in Odyssey, twirl in the air, and execute repeated wall jumps. Many of the game’s platforming challenges would be hard with many platformer protagonists. With George, I was almost always able to save myself due to just how perfect the gameplay here is. It’s a joy. He also has a jetpack that can be used to get around more easily.

In the castle’s hub, there are entryways to the four areas containing keystones. But you’ll need to use collectibles to open the doors. These are stashed all over the place, and the time I spent poring over every nook and cranny looking for them was blissful. This game attacked the pleasure centers of my brain. No complex systems preclude you from grabbing the collectibles either, you just approach them and they get tallied up. Plus there are petals you can find all over that you can use to purchase costumes.

Speaking of those costumes, some of them are different versions of George. But you can pretty much just dress up as other characters, including the antagonists. You can fight Aleandra while using Aleandra’s character model. It’s pretty funny. I was overjoyed upon stepping into the first of the four main areas, as it had just as many collectibles to grab as the main hub. Getting that first keystone felt substantial, culminating in a trip to a strange world filled with rotating platforms that looked as if they were made of shifting, metallic paper mâché. This had me pumped to see the rest of the game. 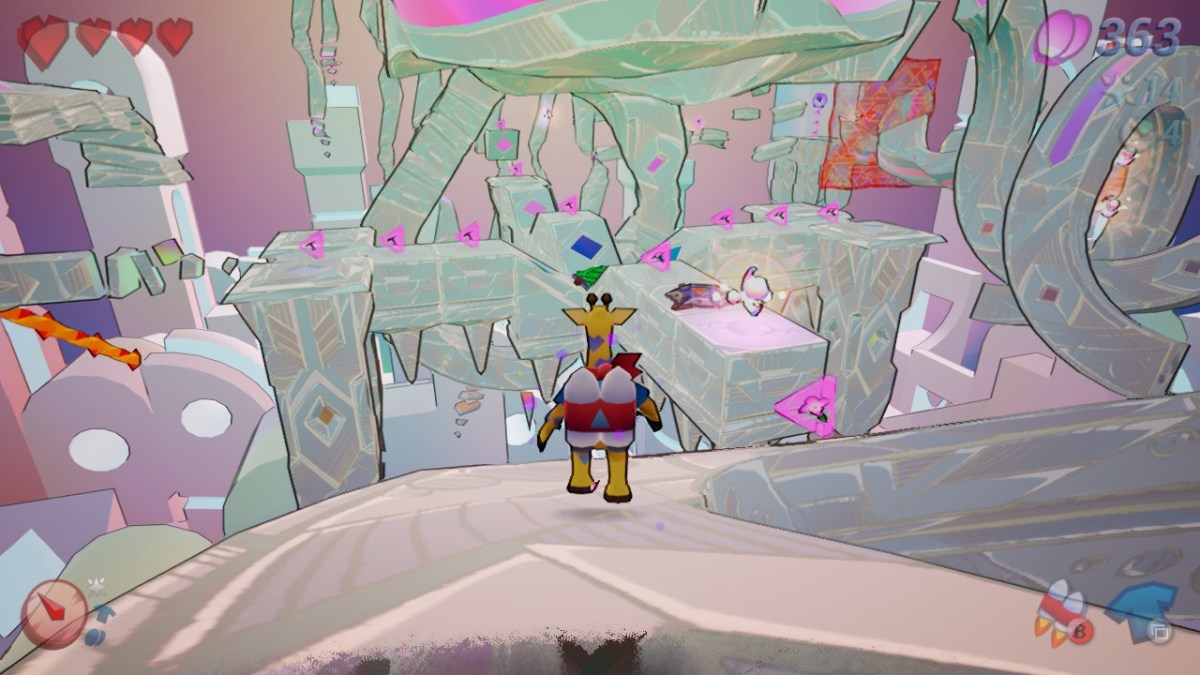 This section came to a head with a boss battle. George can either jump on foes or spin into them. The spin is the only part of his moveset that felt kind of weird to me, as it doesn’t have much range. However, you can use it indefinitely on the ground, which turns him into a whirling dervish. And that was fun in and of itself. Beating this first boss netted me the first keystone, and I set off with the understanding that each of the remaining three areas would be similar.

Upon making it to the next, I was saddened to see that there were half as many collectibles to find and a significantly shorter time commitment was required compared to my previous level. But this one also had its own boss battle, so I thought that, yeah, there’s just variance between the length. That’s fine. But the other two areas kind of just feel like an afterthought. These two areas had no collectathon focus and no boss battles.

Don’t get me wrong, the level design and gameplay are great in these too, but doing the others first definitely hyped up the rest of the game for me in a bad way. One area first focuses on driving through 10 rings with a car, followed by an obstacle course where you have to go through more rings while riding a sphere (or square, which is as difficult to maneuver as it sounds). All four of these sections end by taking you to that strange otherworldly space where you have to make it through platforming challenges. Upon collecting all four keystones, there’s one more area, which is much like the latter two.

Castle on the Coast is far from difficult, plus there are copious checkpoints, so no one will likely end up frustrated by playing it. However, the platforming is involved enough that even aficionados will have a great time. 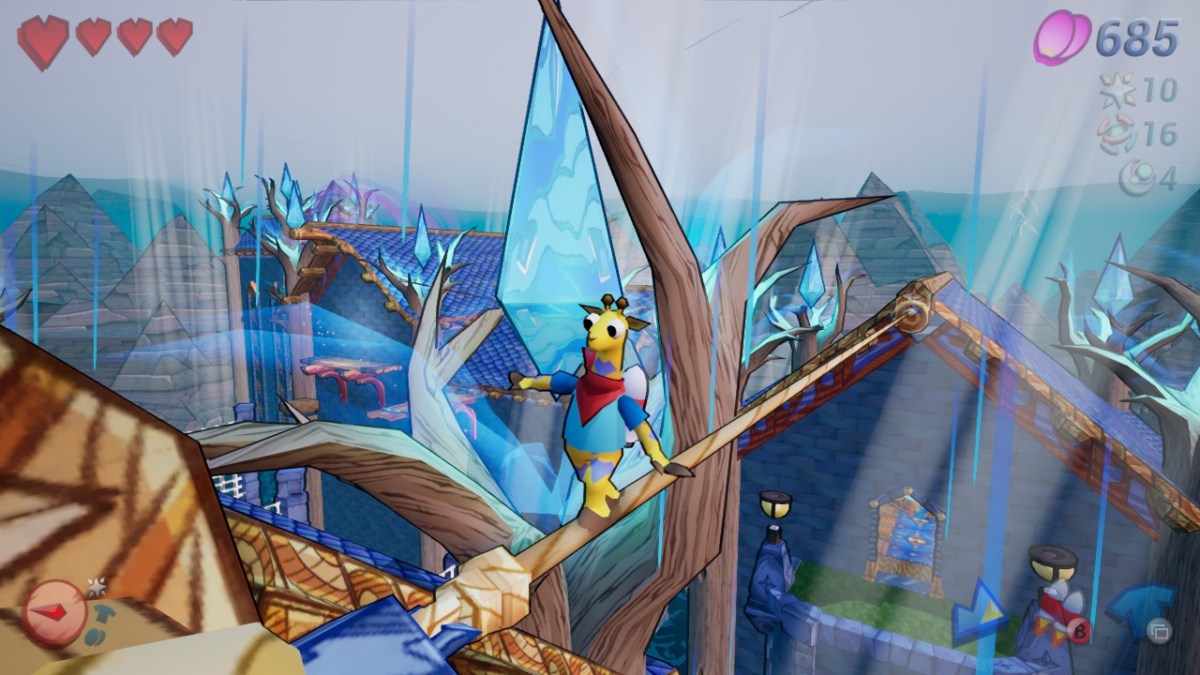 Castle on the Coast took me about 3.5 hours nearly achieve 100% completion. Honestly, this is a wonderful game that’s only held back by its short runtime and how inconsistent the length of each main area is. Aside from that, though, it only costs $15 USD, and a part of that goes to the Valley Children’s Hospital.

If 3D platformers are your bag, this game is a must-play, even if it’s over far too quickly. Between the absolute joy of double jumping, twirling, and diving through the air alongside bursts of jetback thrusts and the enthralling magical areas, this is quite the special treat. I just hope that the game’s designer, Peter Lantz, goes on to make full-length games in the genre. The ball’s in your court, Peter.

Castle on the Coast

Short but undeniably lovely and containing some of the best 3D platforming money can buy, Castle on the Coast soars, only to be held back some by uneven pacing.