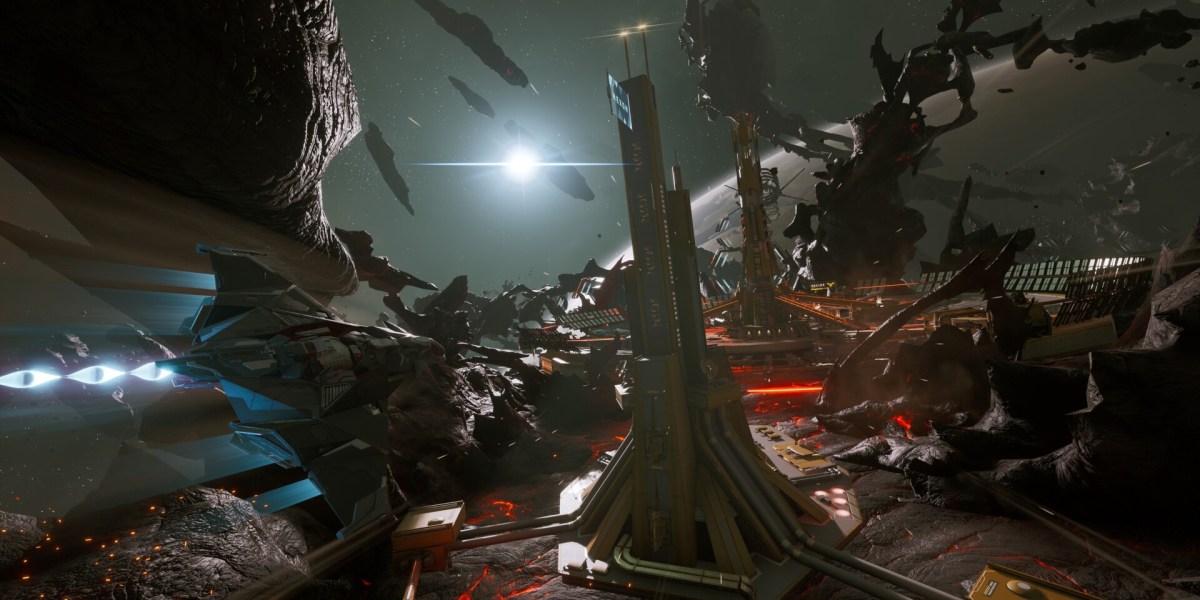 When I first heard of Chorus, I was all “neat, it’s ECHO in space!” But then… silence. I had all but declared the game vaporware when we got invited into an online presentation and a chance to try out a demo. So here’s Chorus as experienced via stream, and some personal game time, with a preview build.

In Chorus, you play as Nara. She’s an Elder of the Circle, or to translate it into human parlance, a superpilot for a space cult. Said cult has subjugated spaceborne humanity to fulfill the Prophet’s vision of Chorus. Nara breaks out from her conditioning and starts fighting back together with her ship, the Forsaken (Forsa to friends). But the fight will be long and hard, and the two of them will need allies. 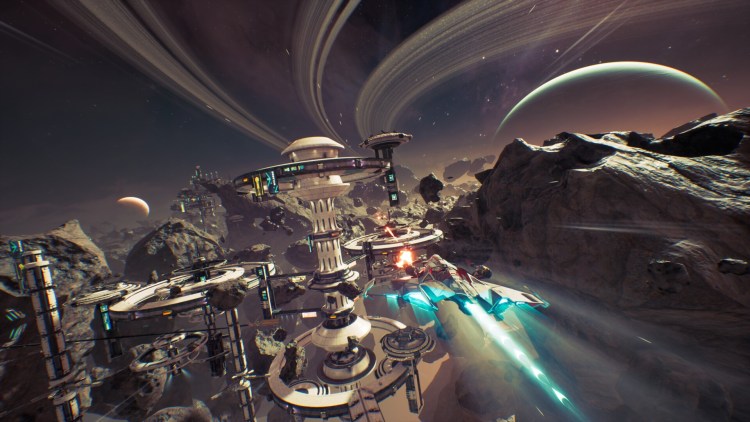 This is Tirak Haven in Stega Central. It looks nothing like the name would imply

As such, Chorus is a space fighter game, with two really weird elements. First of all, Nara and the Forsaken are a supernatural warrior combo, being able to teleport behind enemies, sense important stuff in the area like a plot-driven radar, and drift in a way that defies physics.

The second is that you can’t roll the plane. The mouse controls the pitch and yaw, but any roll happens incidentally. A and D just execute barrel roll dodges — I had to do plenty of those in the demo. The middle mouse button reorients you to the galactic plane. This is very unusual for any flying game and took some getting used to.

On the other hand, with Nara’s powers in hand, you kind of don’t need to know how to do fancy maneuvering. To get on the enemy’s tail, you only need to see them on the screen and just mash a button to teleport. You’ll be immediately put in a position to shoot from the rear, thus solving the major conundrum of gun-based dogfights. 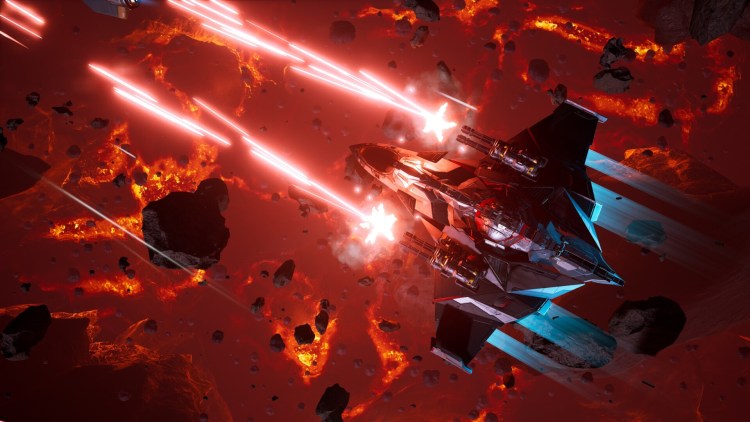 BEHOLD! THE BALEFUL TECHNOLOGIES FROM THE VOID BETWEEN DIMENSIONS!

And no, you don’t have have lock-on missiles. The ones that you have are dumbfire rockets, so without the teleport tricks, you’d be recreating the Battle of Palmdale in space.

Outside of just ganking swarms of disposable enemy craft, you’ll be attacking stationary targets like capital ship turrets and space base power cells. This is actually a bit more fun since you don’t have a single button solution to all your problems. The last mission of the demo had me attacking two defense pillars. I had to destroy their cells before the guns shot me down, and this is where speed boost and drift powers proved to be very useful.

After all, if you barely need to do anything to get on the target’s six, then drift only becomes really necessary when navigating in constrained space. Since the space temples shown in the presentation weren’t in the Chorus demo, that was the only way to use it. 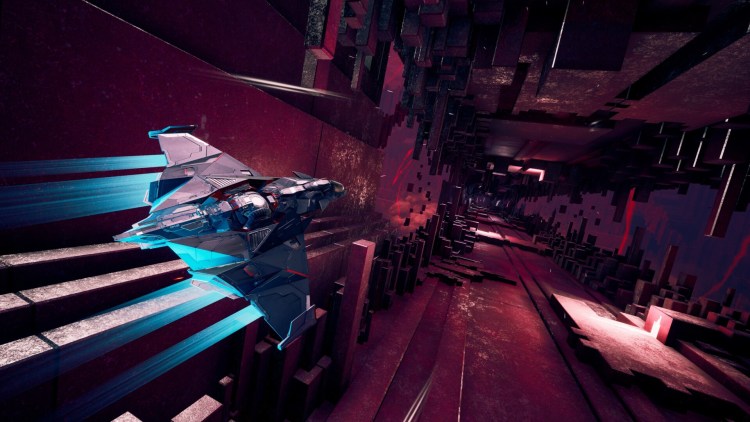 So, ugh, yeah, the space battle portions of this space fighter game aren’t that great when compared to Everspace, Freelancer, or whatever other good space game you’d like to name. It’s all dodging bullets until you can press the “I win” teleport button, and hoping that you’ll survive long enough for hull regen to recharge (you have a shield, but it melts so fast I wasn’t even sure I had one until I checked ship stats at a dock). That is less than ideal.

Popping the cockpit to grab some floating loot

In Chorus, outside of combat, or even during it, you can collect items floating in space. Sometimes, those are health regens that appeared from destroyed enemies, but most of it is hidden loot. Be it money or upgrade parts, you can use them when docked at a station. Personally, I find it weird that a space cult craft is using parts available to the hoi polloi, but that’s how it is. 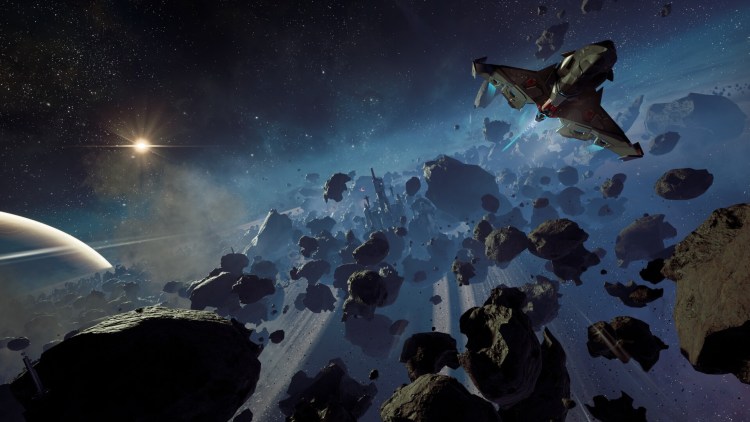 Man, these guys were annoying in Ace Combat

The Forsaken mounts three weapons — Gatling, laser, missile — and you can get better versions as well as similar alternatives. For example, I quickly switched the laser I had for a faster firing yet weaker version. The ship also has three utility slots which can be filled with components that boost HP, speed, and so on. Nothing really to write home about.

Outside of just ship improvements, Nara will be able to upgrade her powers (rites). Your combat capabilities will also improve by completing small objectives, like destroying enemies with Gatling to get a damage boost or shooting targets down immediately after teleporting behind them to increase teleportation range.

In space, no one can hear your “meh”

Now, with the gameplay out of the way, we can get to Chorus’ real disappointment: the visuals. For a game set in a universe dominated by a space cult from beyond our dimension, it looks extremely bland. While the Forsaken at least looks like the AI fighter from Stealth (2005, 5.1 on IMDB) with a ball jammed in the middle, the rest of the friendly human bits are just the blandest sci-fi stuff imaginable. 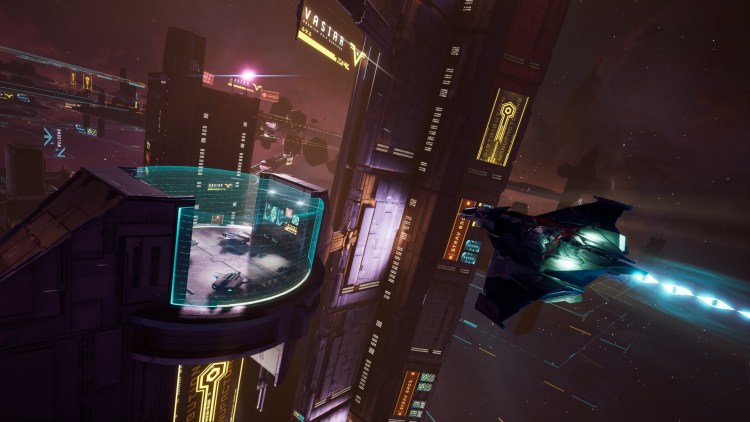 Much supernatural, very cult, so wow

It’s all just a grey jumble of simple geometric with the occasional space corp hologram billboard. The ships are not much better, looking like generic copies of Starfleet designs. But, the Circle/Cult craft are even worse. Between their simple shapes and large flat red panels, they’re closer to enemies you’d see in a mobile shmup than a PC space fighter game.

So, outside of the temples and Nara’s facial tattoos, there’s nothing supernatural and culty about Chorus’ visuals. It does the opposite of ‘oozing style.’ It’s just space, the blandest frontier.

There’s not much to say about the audio either, only that it’s extremely weird that Nara’s internal thoughts are delivered like whispers usually reserved for malign spirits doing atmospheric spooky stuff, while your RPG protagonist is delving into some super-evil tomb.

It’s always sad when a space game is like this

So at the end of the demo, I realized Chorus isn’t ECHO in space. The latter was an amazing artifact of ingenuity, a paragon of husbanding one’s resources and stretching that buck. The former is… a space fighter game that has a button that solves 90% of space fighter challenges, and extremely uninspiring visuals. Shame, really.