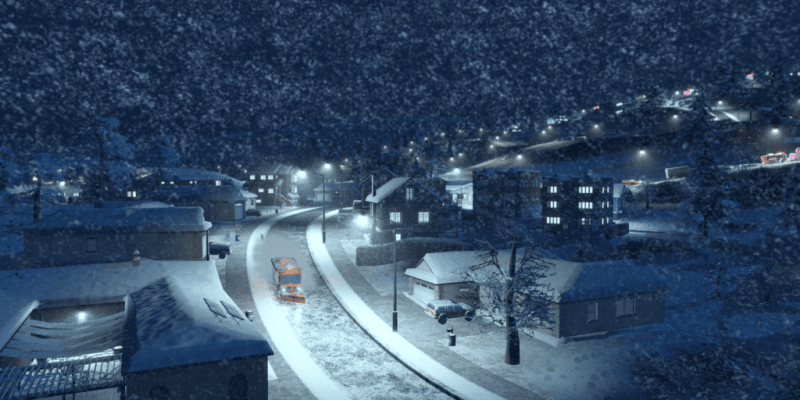 Colossal Order are back with their second expansion for the excellent city builder, Cities: Skylines. While the first expansion After Dark focused on day and night cycles, this latest Cities: Skylines Snowfall update brings weather systems to the cities. No prizes for guessing which particular weather type this add-on focuses on.

Snowfall brings a few new mechanics to the game, giving players even more to think about when designing their cities. The wintry north wind has arrived, so those metropolitan areas will begin to suffer from the sub zero temperatures unless they are heated and cleared of snow.

Heating is the most important addition, and now the ever-demanding Cims want to keep warm as temperatures plummet. Said heating system is an extension of the water mechanics already in the game, except now players need to upgrade the pipes to take heated water around the city and have a source of heat connected to the new network. This can be a boiler station or a geo-thermal plant, neither of which are cheap additions at 60K apiece. It’s therefore a real challenge when budgets are tight in a starting city.

Bloody freezing out there!

The Cims are fragile beings, and when starting afresh they will complain that they are cold. They will also become sick quite easily and this is quite literally a killer. It took a few attempts with a new city to get this sorted out because the option to build any of the heating objects is not immediately available. Players have to get through the initial cold spells while expanding the population to level up and unlock the new stuff.

The only option is to start slow and build the population carefully. Eventually the heating pipes become available and the existing pipes can be upgraded in the same manner as roads. The big problem is the heat source, which is very expensive at such an early stage in the life of a new city. After three attempts and some careful budget shuffling, however, I managed to bring heat to the city.

As the snow falls the roads will start to get covered. This slows down vehicles and can prevent essential services from making their way around the city with the usual ease. The solution to this problem is to build a Snow Dump, which will spawn snow ploughs to clear the streets. These dart around the city, diligently clearing the pesky obstructions. You can see the roads becoming clearer as the snow is removed from the surface.

Those are the two main features in Snowfall that affect the Cities: Skylines gameplay. On top of that, of course, there are the additional cosmetic items. There are now some new buildings like a snow mobile race track, ice hockey rink, a snow park, saunas, and a load of other wintry themed additions to set the scene and make your Cims happier.

Trams have been added as a new mode of transport, and work in a similar way to the buses. Set down a tram station, add the roads with the tram lines and then create the route and stops by dragging the purple line around the intended areas. I always found the transport route systems a bit fiddly and they still are, but it’s hard to think of a better way of doing it. At least trams are now in and players can stop trying to make their own tram systems with tracks.

Snowfall does change the way the game plays when all the new elements are brought together. As well as having to keep a closer eye on the power output and budgets, road maintenance is also a problem and it seems to chew up a lot of cash. There is a new road maintenance service with a truck and depot and it’s wise to keep the roads in good shape when the freeze rolls in.

There are three new maps included with this expansion and, naturally enough, they’re all winter themed. They’re pretty decent and should offer a challenge, especially the Icy Islands maps which keeps you quite restricted if you don’t use a mod to open up all the tiles. That would be cheating though, right?

The game essentially plays the same, but with some added layers of winter themed problem-makers. I may be a little rusty having only picked the game up again a couple of weeks ago after a long break, but I was finding it tricky until the city population surpassed 10K. For review purposes I removed all mods just to see how different it felt from playing the original and I was scratching my head a few times as I watched demand for heat and power spike up and down based on what was happening with the weather.

Snowmobile racing is popular in every city centre these days.

On the subject of mods, I found most of the existing mods I was using previously still worked, with the odd exception. CO has been working with modders to try and make the transition over to this latest update without breaking too much, and the fact that only a couple of mine stopped was a good sign. If you do get problems with the game when you load it up for the first time, disable all the mods first if there are any issues. One of mine, and I’m still not sure which one, caused some horrendous tearing and flickering making the game unplayable.

Like the After Dark expansion, Snowfall brings small but fun features to the game, and, while they are notable, it’s hard to see them as essential. Colossal Order are already giving some of the new features away as part of the patch update, and additions such as a new public transport UI and weather in the forms of rain and fog are free.

The price of £9.99 is reasonable though; and I believe it’s worth every penny for the fact that this is a developer that’s making every effort to support its community. If you play the game regularly then it should be a fulfilling purchase. The winter additions add enough to the game to make it worthwhile (if not quite essential) and Cities: Skylines does look fantastic all covered in snow.