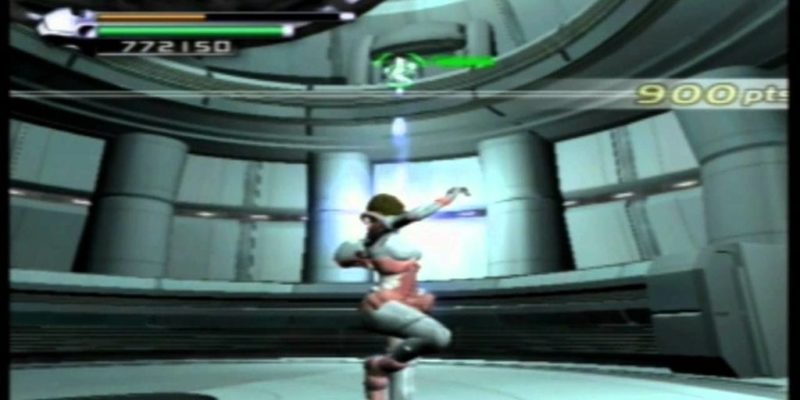 The platforming genre has grown and matured over the years. From simple mechanics, such as stomping Goombas for points and collecting coins for additional lives, to more advanced leaps like those found in head-scratching puzzlers in the Portal series, the gameplay has evolved with the growth of technology. Cloudbuilt is one such example of that evolution. It is anything but your traditional platformer, or puzzle title, for that matter. For starters, the game features a truly unique art style. There are hints of hand-drawn textures mixed with cel-shaded environments and it’s all chalked up in a comic book-esque design. The game definitely takes its strides in the art department, taking on an obvious minimalist approach in its overall presentation.

The character design might take you back to a Mega Man X era, as the main character sports mechanized armor, hair that could rival that of Zero’s, and even wields a blaster that can be charged. Enemies come in the form of annoyingly aggressive robots that won’t think twice about pushing you over a recently conquered ledge. This becomes a chore when you’ve managed to land an insanely challenging run, only to be pushed off. Oh, no. Didn’t grab a checkpoint prior to the leap of faith? Well, then it’s back to the beginning of the level we go. But I digress.

The chiptuned flare of the soundtrack, although repetitive, never really dies out and accompanies the action well.

Aligned with the genre, the controls take pieces of a platforming runner and tie them in with a third-person action shooter. While there is a heavy emphasis on speed, this can also become one of your enemies as well. Even with tons of customizations that can be made in the main menu, there is still an overall stiffness to the controls. Being that it released on PC via Steam, the game heavily relies on its mouse and keyboard combination; however, with the newest update, controller support is introduced. While this is comforting for rogue console players who now enjoy PC gaming (ahem, me), controller use doesn’t flow as naturally as the good ol’ keys and pointer. It feels stiff and something I could never exactly tune quite right, regardless of how many tweaks were made to the sensitivity. This is important due to the wall-run, boost, and double jump features.

The use of the ‘Boost’ and ‘Jump’ become synonymous throughout gameplay, allowing players to incorporate the two to make blazing hikes up walls and segues between platforms. The wall run feature also delivers a challenging feat, being that explosives and other electrifying hindrances are littered among the corridors and ledges. The controller usage and movements are reminiscent of the Capcom developed P.N.0.3 which, for those who do not know, was a Nintendo GameCube title. From an overall stiff platforming feel to the aiming reticule and even down to the combat, quite a few similarities can be drawn between both titles regardless of the noticeable age gap. Cloudbuilt, on the other hand, takes on a more free running and open-world role.

In terms of storyline, the player is immediately charged with questioning your ghost-like hologram and your surroundings. We are faced with an out-of-body experience and inner monologue to decipher where and when the story takes place. If this sounds a bit confusing, it is. Conversations will lead you to discover more about your surroundings and what exactly led you to be literally beside yourself as you watch your body sleep. However, in terms of actual gameplay, Cloudbuilt strives for non-linearity, being that there are multiple ways in which to tackle a level. Think, Parkour with a jetpack.

Intermixed with its storyline and crisp visuals, Cloudbuilt continuously emphasizes one thing: speed. There are leaderboards to pit yourself against other players and challenges you to become more proficient in your craft. While there is a noticeable and heavy learning curve, there was never really a point where I seemed to have hit my stride. Unlike games like Super Meat Boy, I never really reached that “Aha!” moment during gameplay. Instead, the speed tokes were met with punishing falls and many, many restarts.

Jumping smaller areas while picking up speed may leave you effortlessly falling to your death. Moves such as the mid-air dash often led to haphazard jaunts and overall silly mishaps. At times, making your way on to a small platform became a lot harder than jet-packing up a huge wall with laser beams flying at your face. A good comparison would be something like Sonic the Hedgehog, where most speed runs are seamless and not necessarily short-lived. Cloudbuilt, on the other hand, will fling you right into the openness of the sky without thinking twice about you falling to your death.

On the left side of this image you will see the before approach to an obstacle. The right side is after enemies have sighted and started firing.

While the overall mechanics of the game seem punishing, there is something about Cloudbuilt that kept me intrigued. The adaptive gameplay continues to challenge players over the course of their experience and multiple endings leave players to venture back into the cel-shaded realm. You may catch yourself in awe, as the level designs are simplistically beautiful. However, these moments are short-lived, as combat and obstacles can be unforgiving.  Leaderboards are also affixed to the side of each level when highlighted, so there’s always someone out there trying to crush your best time. In terms of combat, there is a lot left to be desired. There just seemed to be an overall missing tie-in where speedy combat marries robust dashes, still delivering a challenging platform experience.

7 reasons why Call of Duty can rise from the dead